The reality of this entire project really hit me yesterday, the season finally came to an end, but what a spectacular season it was!

For the last five months, I’ve been climbing  and skiing Colorado’s highest peaks.  I want to thank all my sponsors, friends, family, and ski parters for supporting me through this project. If I were to to it again, there are certainly things I could have done differently – different routes, different dates, different outcomes – but in the end I have given it my all.  I am grateful to have accomplished, experienced and pushed myself to the depths of what became one of the hardest personal projects yet.

It’s been a battle, and its been a journey that I will remember for the rest of my life.

It’s summer now and before completely signing off on this project, I’d like to clarify to my supporters what I did accomplish. This was a massive project and included climbing 57 peaks and 19 additional attempts and ski days so if you have any additional questions, let me know.

I am disappointed that after all the time and effort that I’m unable to claim a 14er ski record of skiing every peak top to bottom in one single season.  After all, that was my one of my stated goals. That being said, I did climb every peak, some peaks on multiple attempts and even multiple summits. I love the Colorado ski mountaineering community as much as all of you. And that means respecting the guidelines set by those that first accomplished these feats [established by skiing the 14ers]. That being said, here are many gray areas (e.g., what is summit ski descent, length of the ski off the summit, etc.) – These guidelines were basically first put into place by Lou Dawson, Chris Davenport, and Ted Mahon who I have met and the latter two and have even skied with. Ted Mahon said it best to me the other day: “If we loosen the standards then suddenly we won’t have only 15 or 20 people that have skied the 14ers, there will be like 100, and the accomplishment will become watered down and not as prestigious”.

What I learned in attempting to ski all the peaks in short time frame, is that I didn’t want conditions to ruin my fun this season. So for those that have concerns about skiing off the true summit, I skied from the highest point I could. And in 54 of the 57 peaks skied that was the summit. However, I cannot take credit for everything, and I want to respect some of my mentors and heroes in the ski-mountaineering world.  In the end the site “14erskirecord.com” is no longer about breaking a record, but in fact it was to “re-cord” the events of my project to see if I could climb and ski every peak in the same season. It was about providing additional resources to my fellow ski-mountainneers and to those that will undoubtedly follow this attempt and continue to push the sport.

I did indeed summit every single 14er peak to the very top.  Heck – that part was relatively straightforward – after all – I have over 1000 ascents of the Colorado 14ers by this time in my career, and in all conditions and seasons. (I think I am taking a break from the 14ers after this)! There are so many other mountains in the world to go and try out, and I can’t wait.

Let me clarify some examples: 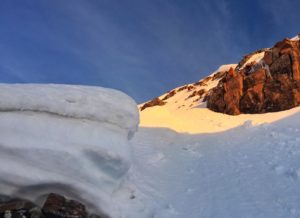 Climbing up the final bands on Pyramid.

* Other peaks that people will question in this project due to lack of snow or other reasons were Blanca and Little Bear.  While I have skied both of these peaks several years back- for this project when they were finally in  good condition in May, I was too busy skiing 12 peaks in succession in the San Juans and Elk Ranges so there was simply no time to get over to them again.

When I get some time I will be updating the trip reports pages. These will hopefully help tell more of the stories. Since I am not claiming any records these will be put up as soon as I am able. One thing is certain- I had a blast doing this! It was challenging and I learned a lot.

If you have been following my project – I appreciate it.  I am grateful for all of the support.  I gave it my best and still had a ton of fun in the process. I am thankful for all the people that stepped up to ski with me or provide support:  Roger Carter, Jared Kedrowski, Chris Tomer, Garrett Eggers, Ted Mahon, Chris Davenport, Eric Sangueza, Brad Burgtorf, Mackenzie Hoffman, Scott Benge, Torrey Udall, Tara Dactyl,  Anna Migl, John Fielder, Mike Craig, Ryan Belanger, Ashley Lucas, Grace Kelley, Mark Dud, Jay Ytell, Austin Porzak, Jordan White, Connor Drumm, Mike Lewis, Chris Jones, Cheryl and Bill Jensen, Bob Pietrack, Bob and Barb Kedrowski, Krista Kedrowski, Zack Wilson, and anyone else that I may have forgotten somehow. Also a shout out to the team at Enerplex (Danielle, Justin, Brad and Rafael) for really motivating me and cheering me on,