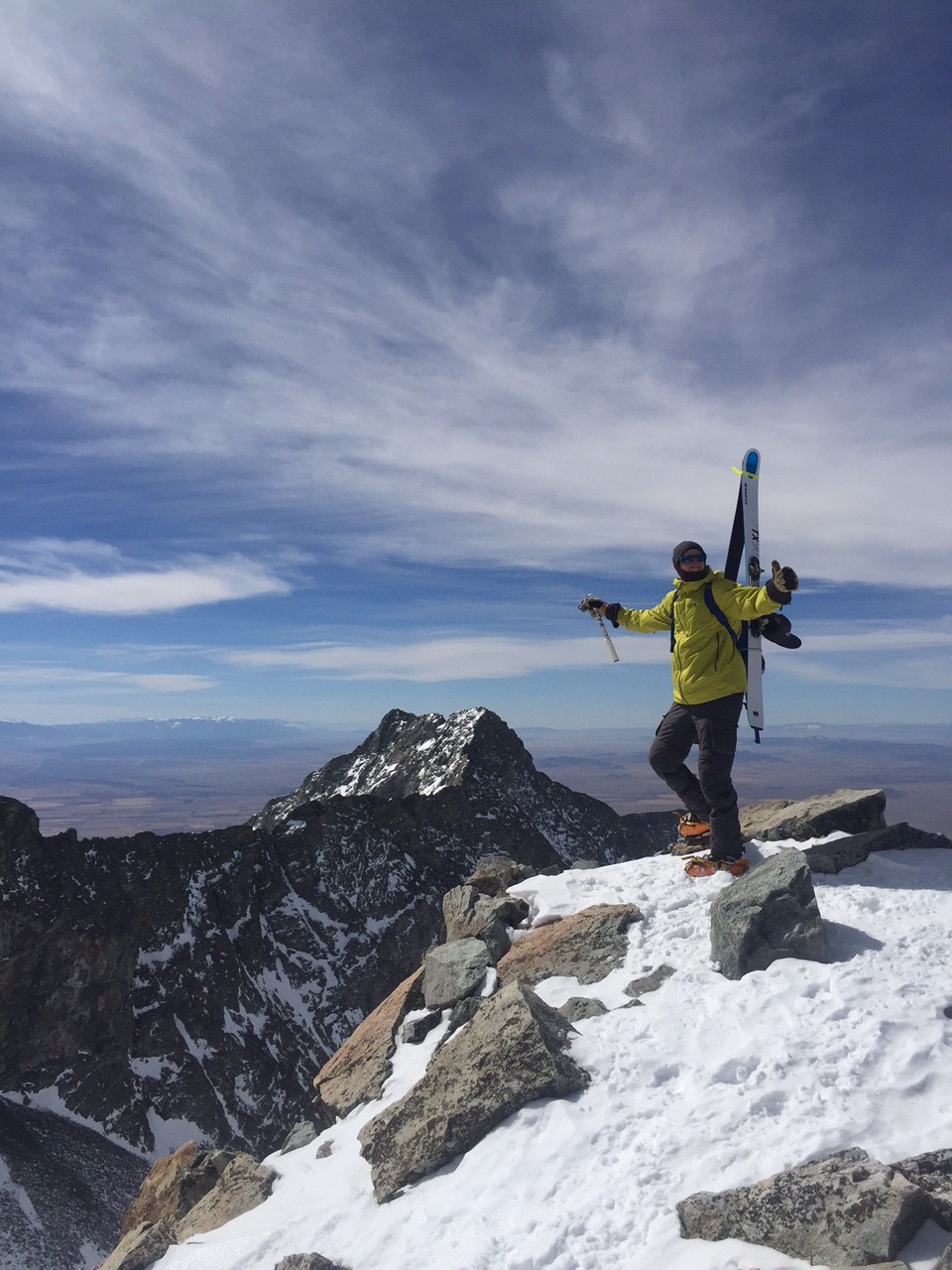 Roundtrip Mileage and Vertical: 18mi / 6,800′ (Includes Ellingwood & Blanca all in the same day)

After the tumble I took on Little Bear, I was down, but not out. I figured since I was all the way down in Alamosa, and these peaks were close by, that I would give them both a go and try to do both in one day. There were tons of incentives on this trip now. The first was that I could wrap up the Blanca Massif after already doing Little Bear on Saturday, and then I wouldn’t have to deal with the Blanca/Lake Como Road again at all! I would be content with not having to come back here again, that’s for sure. Anna Migl was a rock star, willing to stick it out on that day with me after the others had gone home. 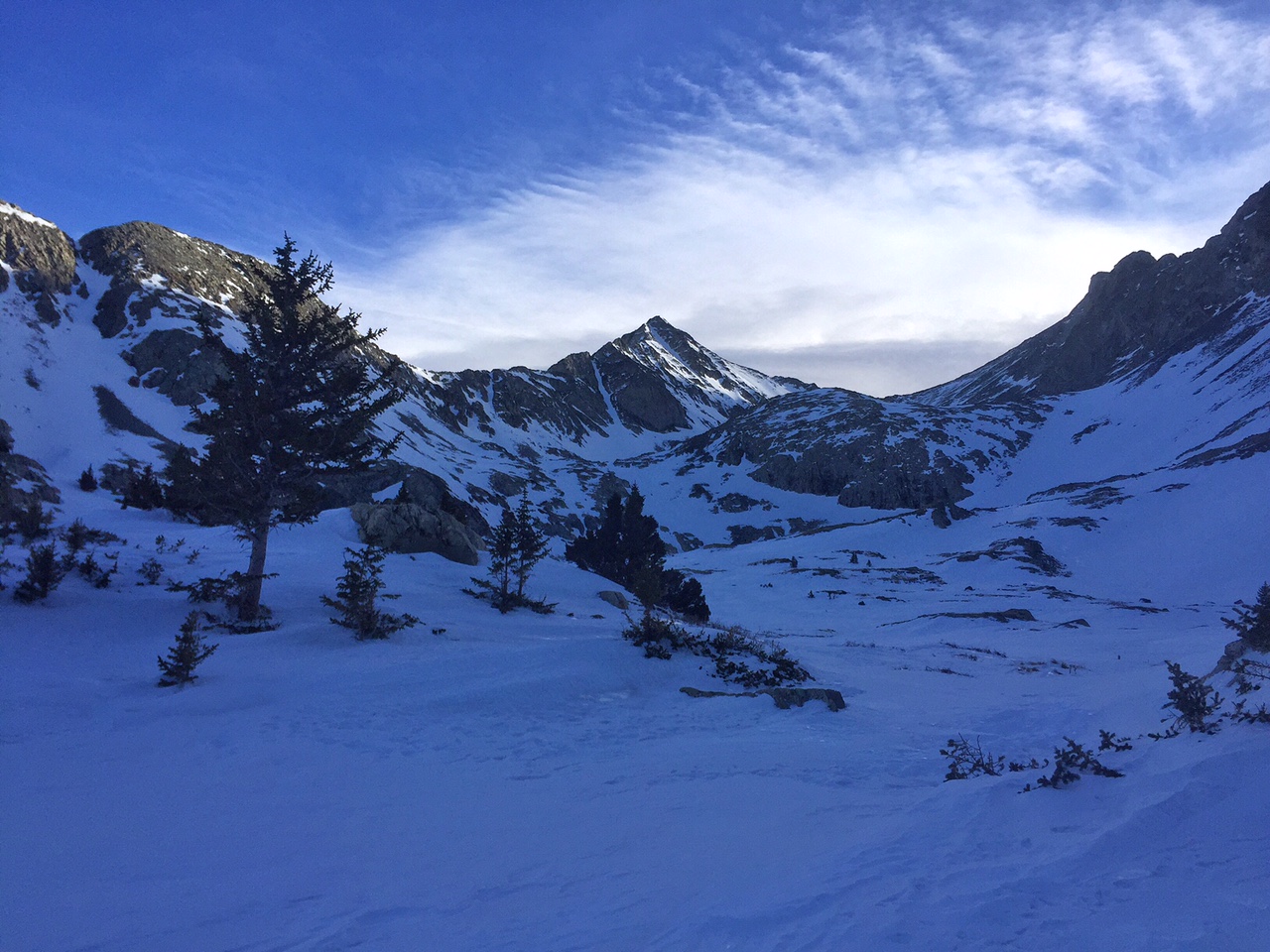 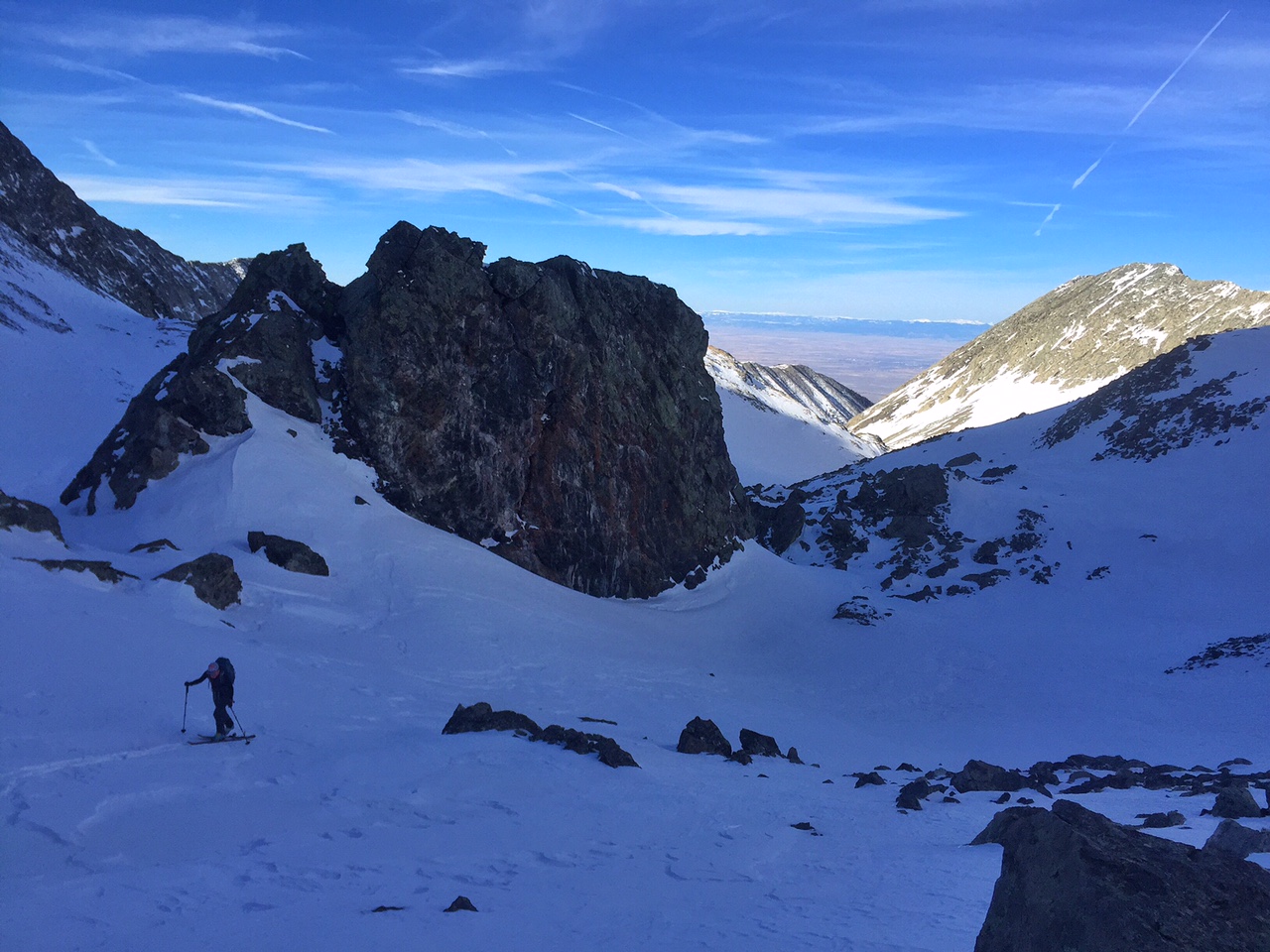 Looking down the valley as we got higher near the start of the boot pack up Ellingwood’s south face.

We began in full moonlight, just like on Saturday, by bouncing up the road for a bit in a 4WD vehicle and then hiking with our boots and skis on our backs. Up at 10,000’ where the trail heads into the valley, we transitioned to our skis and skins. The morning was calm and even more peaceful than Saturday. I felt awesome about the decision. Also, when I was on the summit of Little bear, I got to see the SW face of Ellingwood to see that it was in great snow condition. 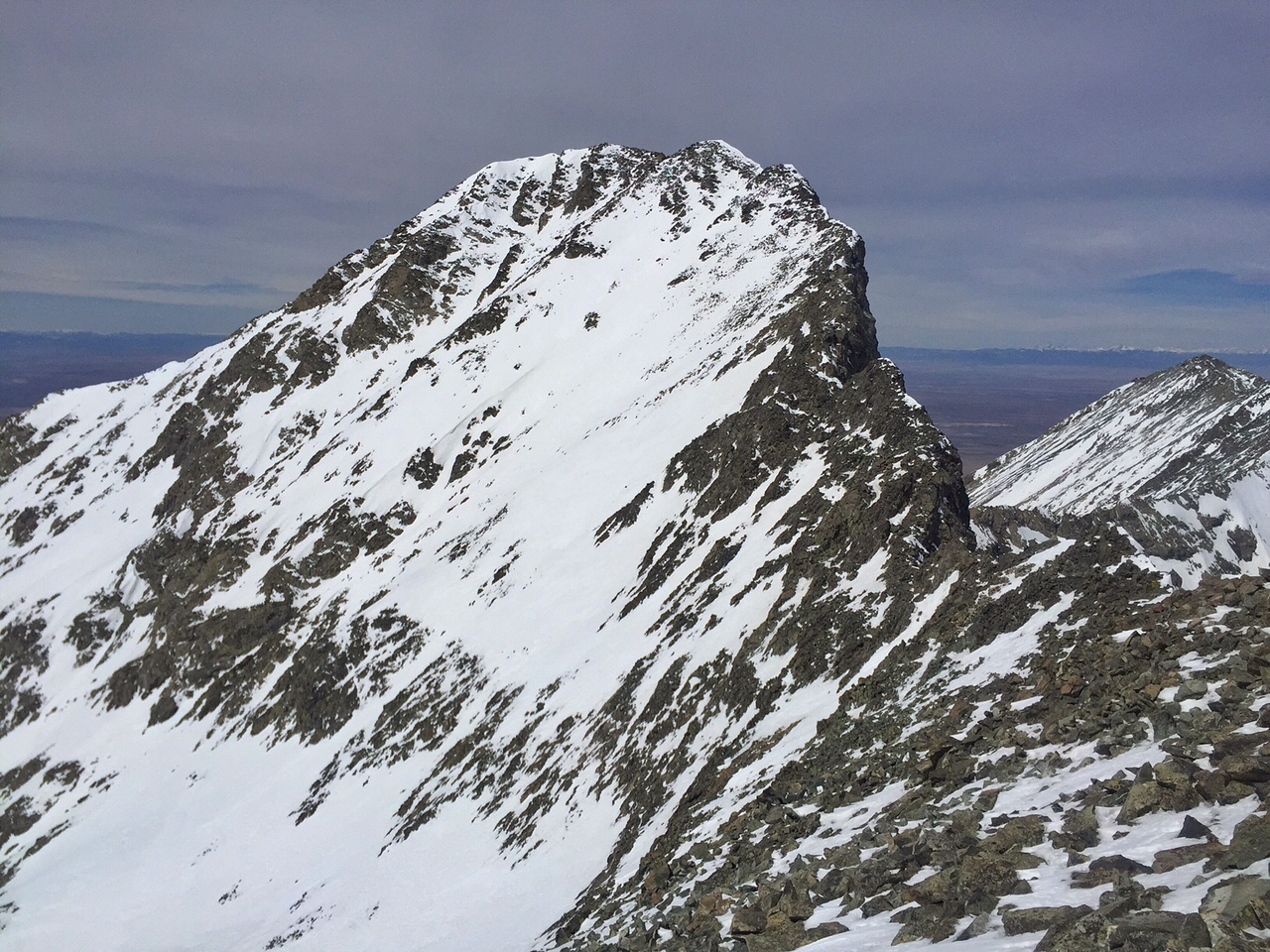 A perspective of the south face of Ellingwood. 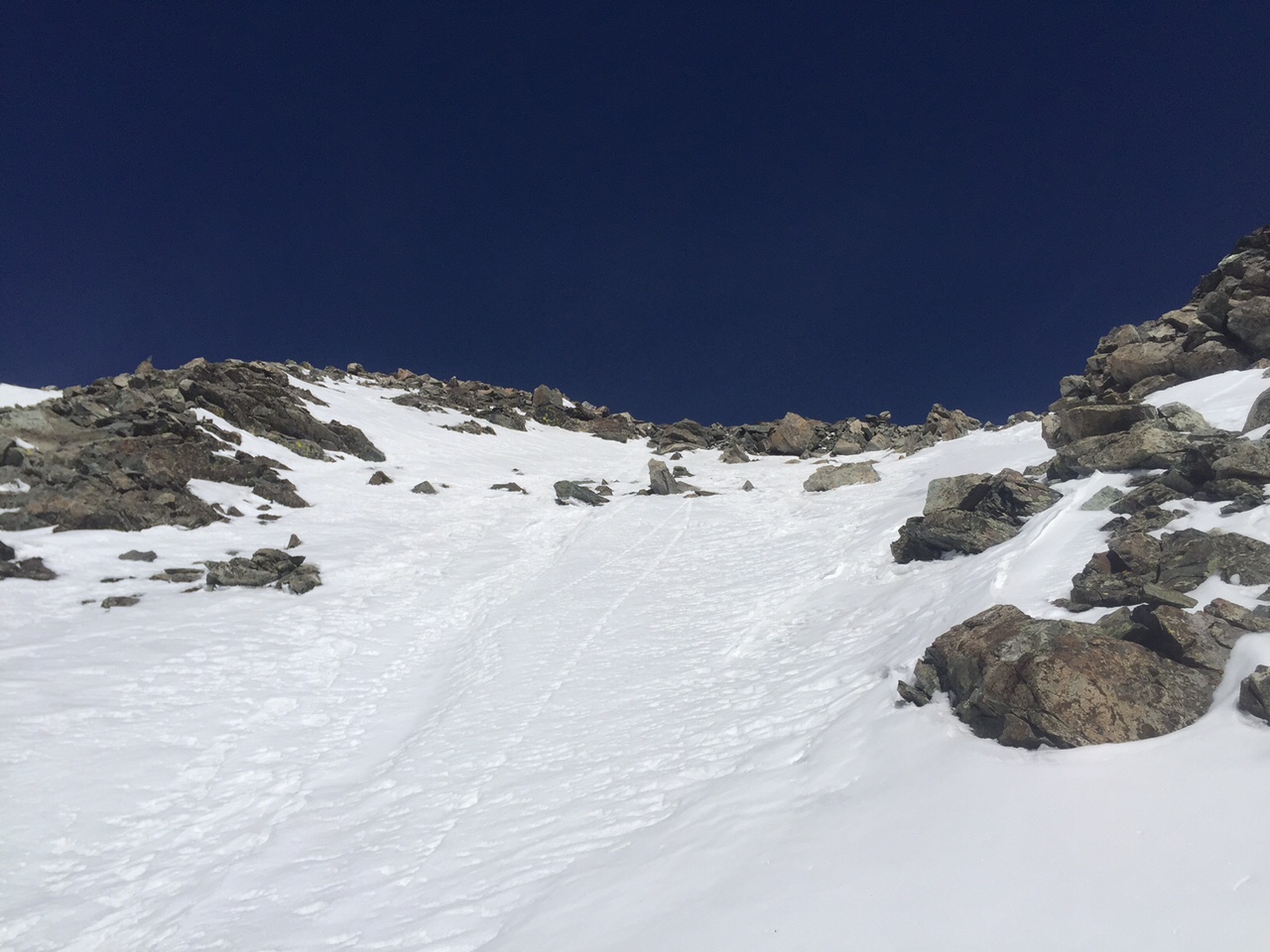 Close to the summit on the south face of Ellingwood.

As it got light, we came to Lake Como and Little Bear came into full view. “Just stay over there” I said to the mountain of Little Bear. “We can be friends, and that’s it. Just let me go over to these other peaks safely.” It almost made me feel like I was telling an ex-girlfriend that I was okay with the pain she had caused me and I just needed to get along so that I could move on to some other peaks nearby without any trouble.   It kind of made me chuckle. 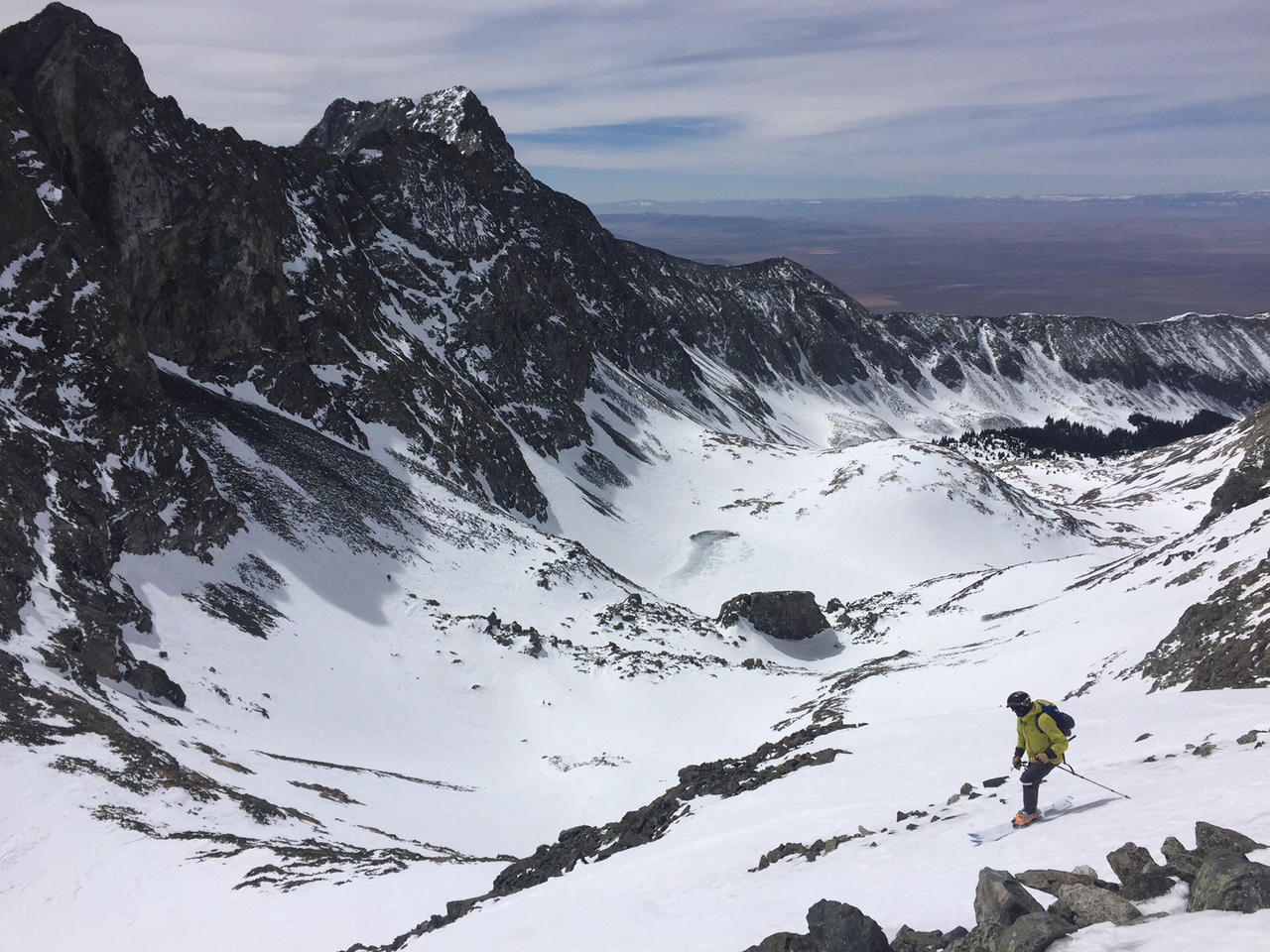 Traversing over to Blanca after skiing Ellingwood – Little Bear in the distance.

We headed up the gorgeous basin with Ellingwood in view and eventually to the flat small bowl between Blanca and Ellingwood. It was a chilly morning and the winds picked up a little bit but the day was crystal clear. After transitioning into crampons, with skis on our backs, I led the way up the 35 to 40 degree slope towards Ellingwood. The snow was solid, and I was hoping with the sun hitting it that things would soften up on my descent.

Before long the summit was reached and it was easy to take a break and sit out of the wind. Blanca looked a bit bony, but I was confident we could find a reasonable line down that peak next.

Then it was time to ski. I sent Anna down into a good spot to shoot some photos, and then it was game on. For a moment I hesitated just because of my fall on Little Bear from two days earlier, but once I started my first turn I felt awesome and it was back to my old self. The face and couloir was spectacular, and in minutes I had dropped back down into the bowl. Looking back up at Ellingwood, I felt grateful I was still in the game and safe, ready to climb up and tackle Blanca Next! (Story continues on the Blanca page!)

Thanks for tagging along and more to come!