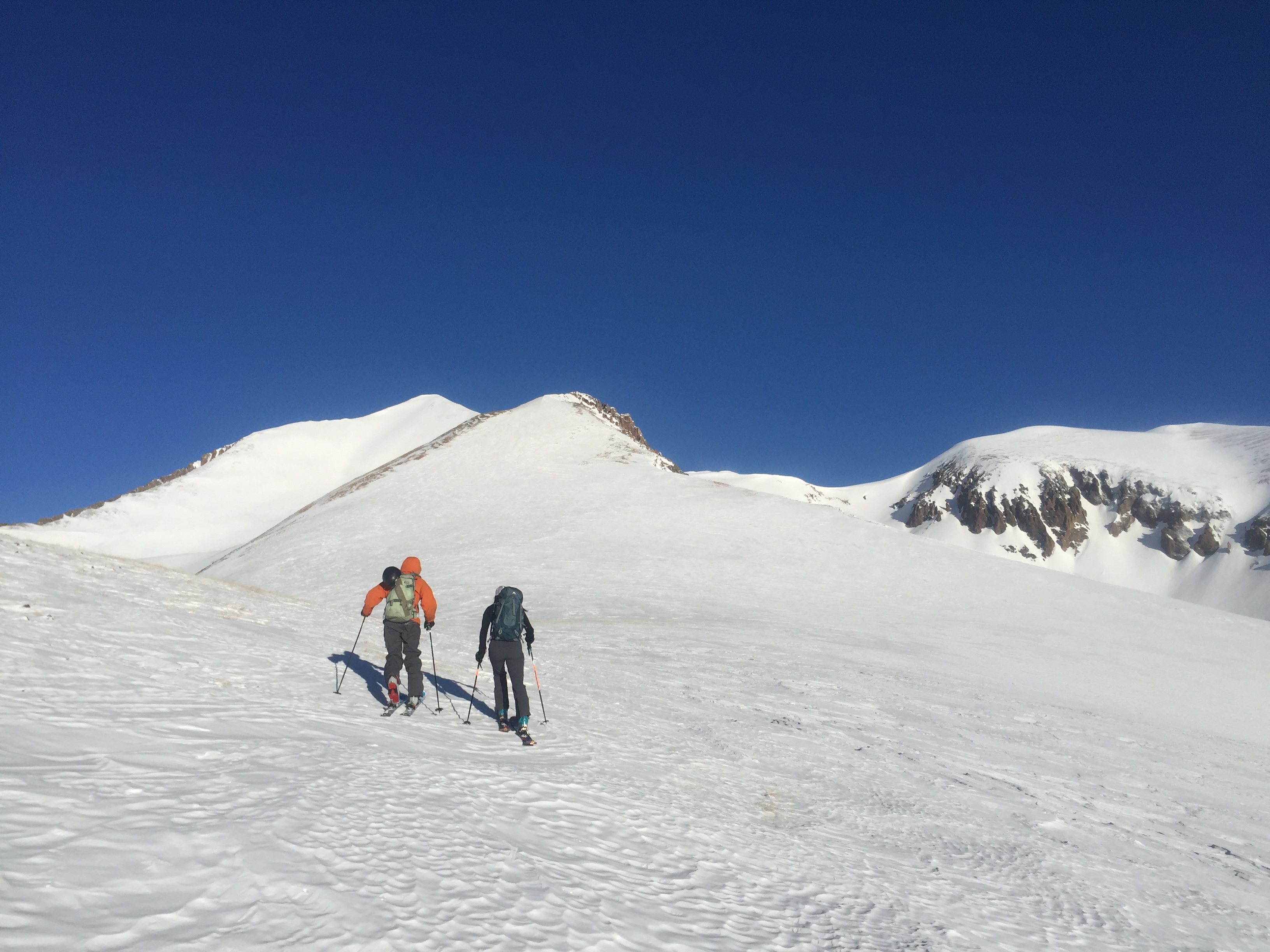 Roger and Anna heading for Sunshine along the east ridge.

Roundtrip Mileage and Vertical: 22mi / 10,200′  (Includes Redcloud and Handies all in the same day).

Sunshine is Colorado’s lowest 14er but it still had to be skied. In 2011 when I spent the night on top of Sunshine, Redcloud, and Handies in consecutive nights, I remember how I would probably want to someday climb all three peaks in the same day.

The ski project was an ideal opportunity to do that. It would be a long day- but with great weather, I knew it was possible. The key to success on this project now and moving forward is going to be knowing and performing days that have 3 or 4 peaks to link up and ski in the same day. (The day would eventually cover about 22 miles and 10,000’ vertical climbing!) 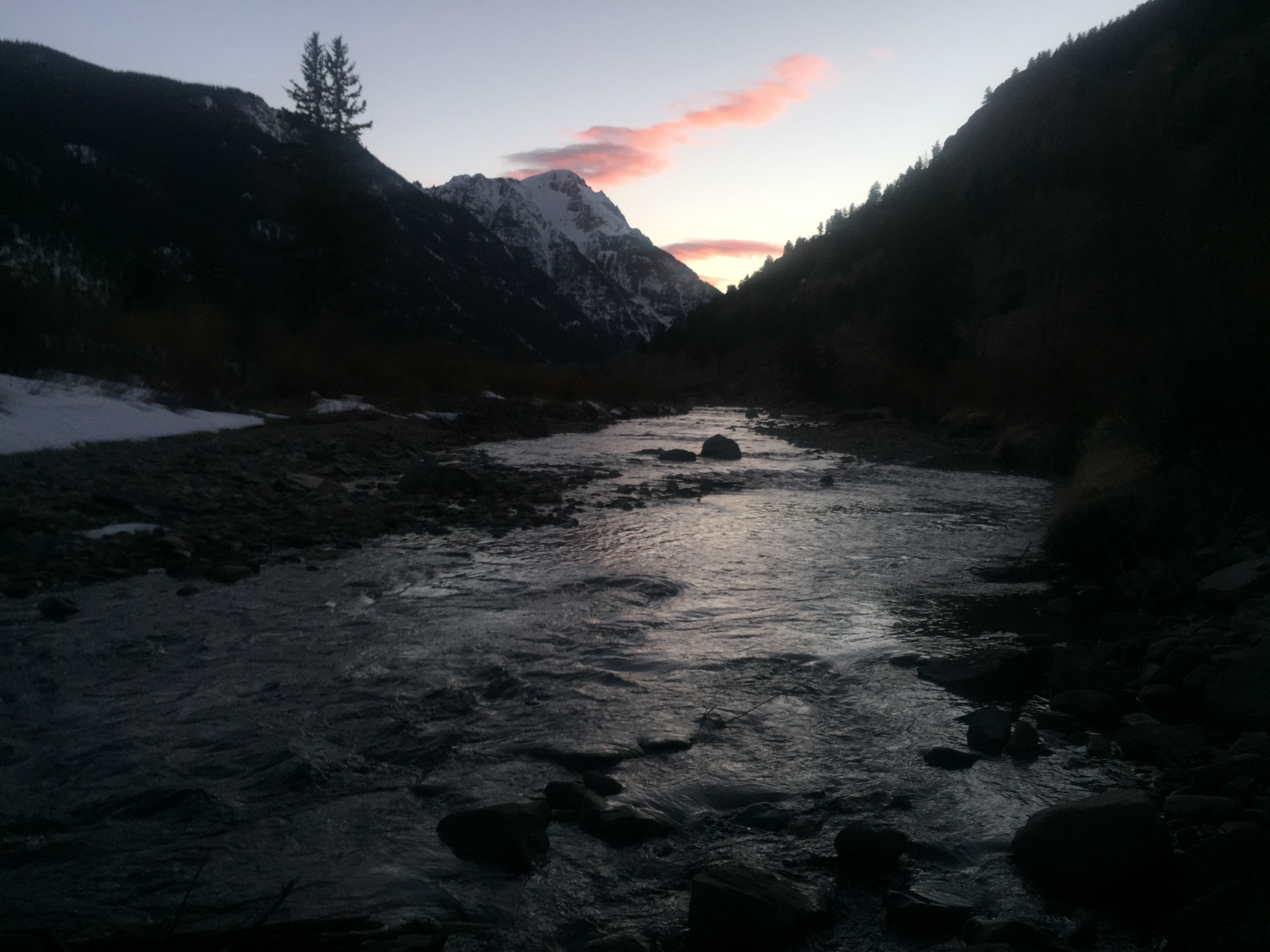 Sunset at Mill Creek Campground before climbing the next morning.

Roger and Anna met me at the trailhead at Mill Creek southwest of Lake City the night of the second and we hatched our plan. In the morning with temps in the 20s and stars out we got up and got moving by 5am. A short walk east on the Cinnamon Pass road to a meadow where we turned north and into the woods got us started in the dark. With the correct line through the woods we climbed up the extreme southeastern flanks of Sunshine. 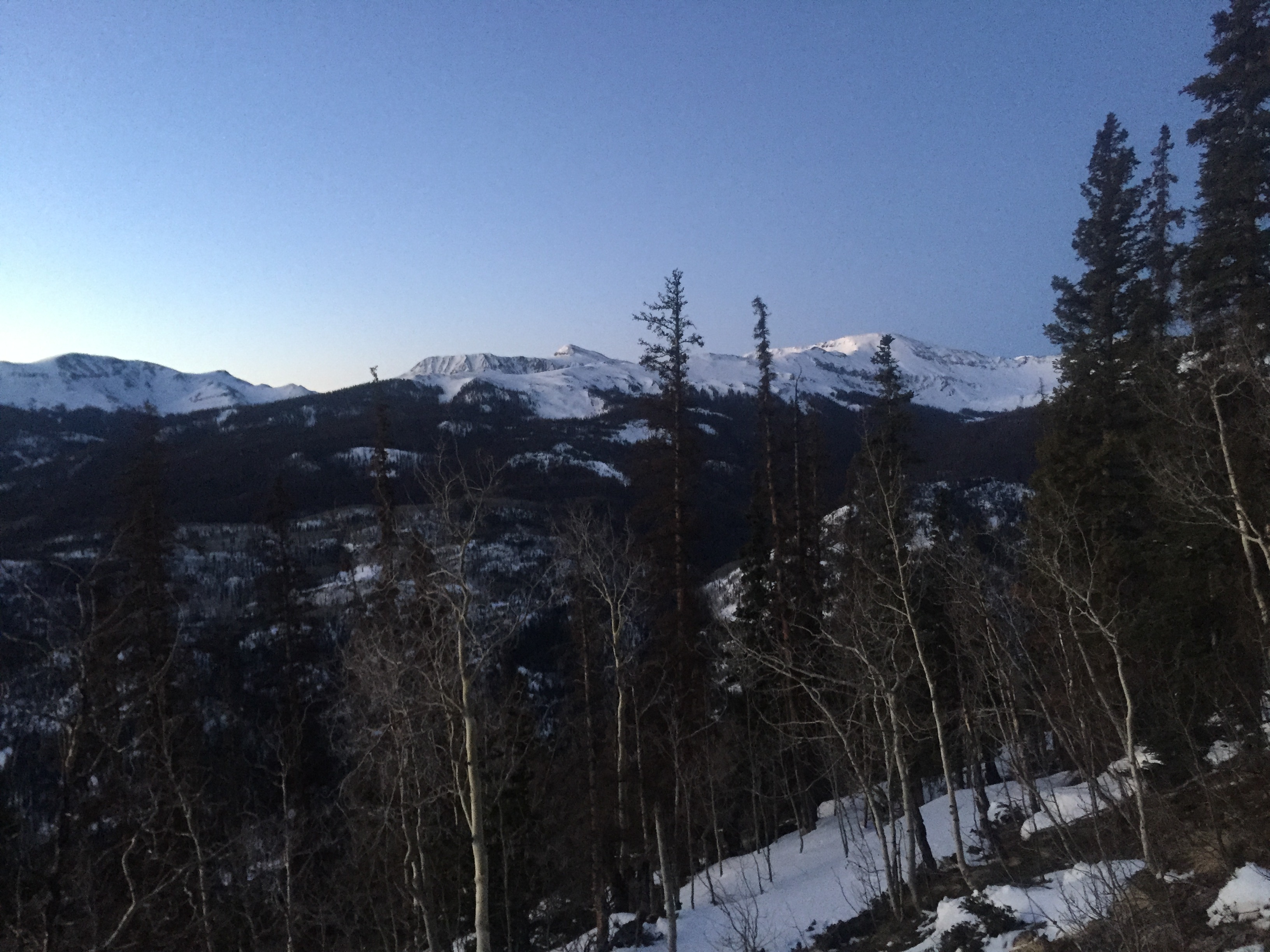 Getting higher and lighter.

By 6am in early approaching light a steep scramble up some talus and boulders got us to near timberline and the snowline. 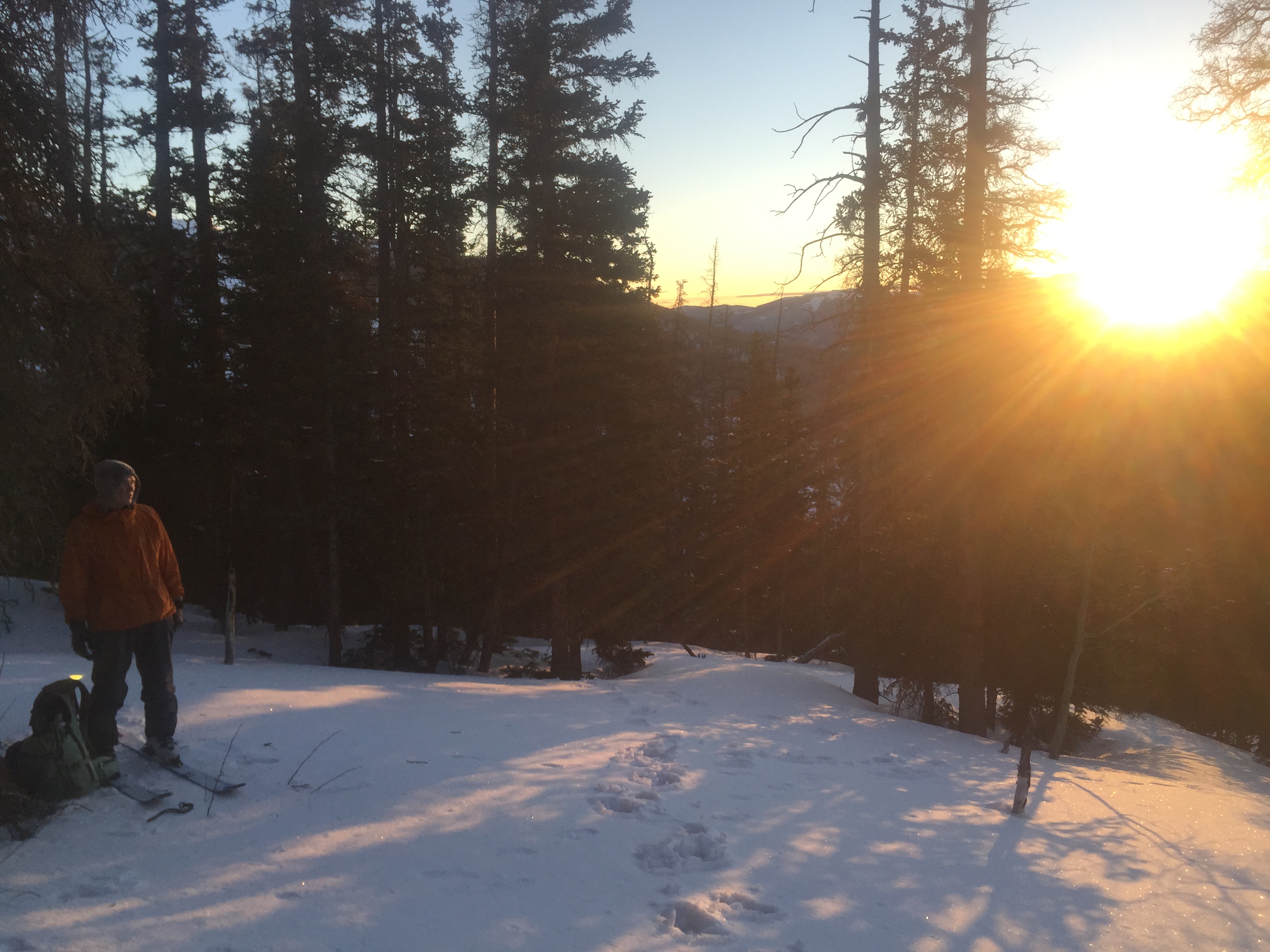 A little before 7am the sun came up and warmed us and we transitioned from our trekking boots to our ski boots. 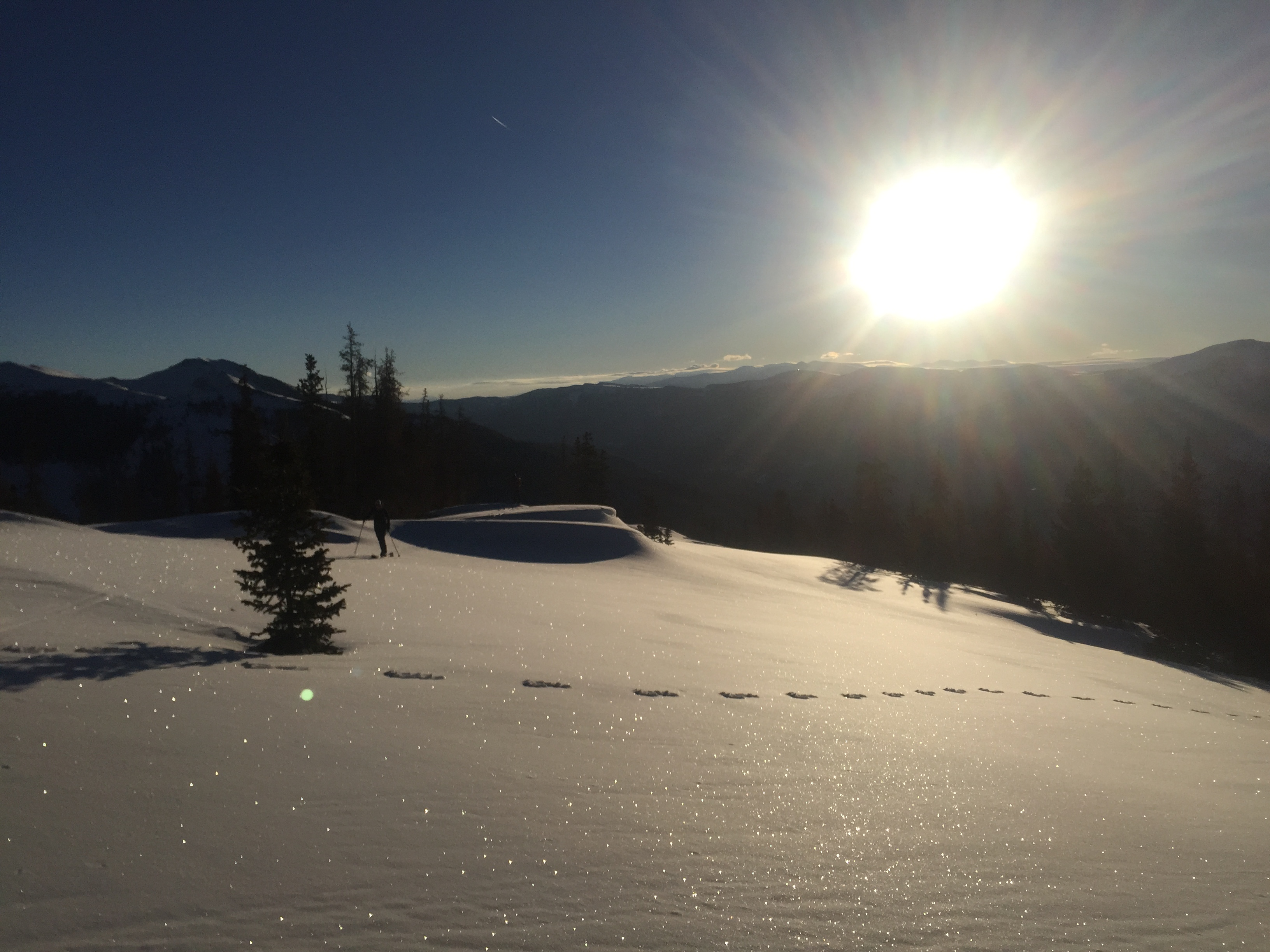 Getting onto the ridge near timberline.

In another half hour we reached timberline and the east ridge of the peak came into full view. It really didn’t look too far away. 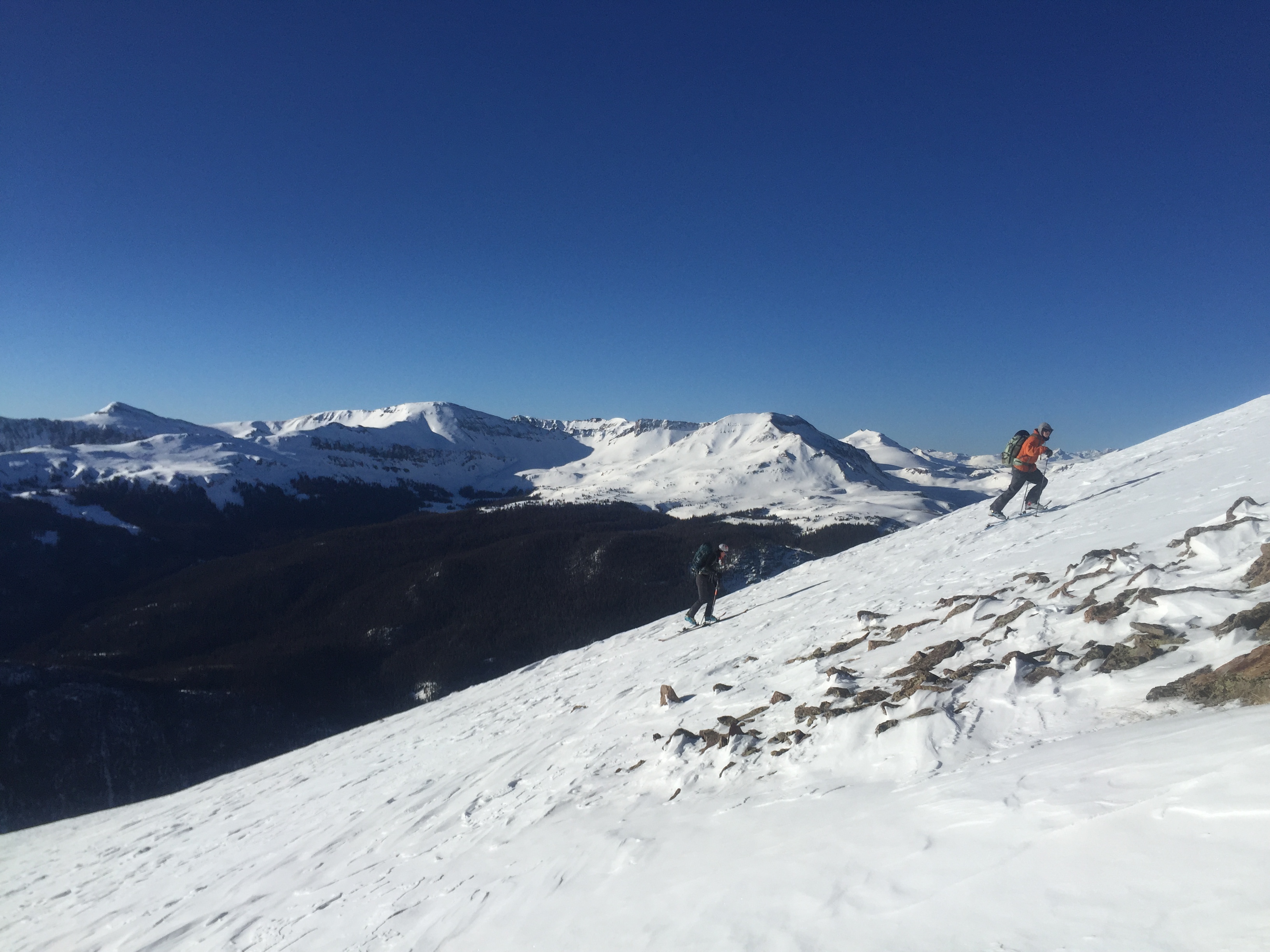 Nothing but blue skies and the occasional wind gust. At 830 or so we approached the upper ridge after zig zagging up a face to reach the shaper ridgeline. 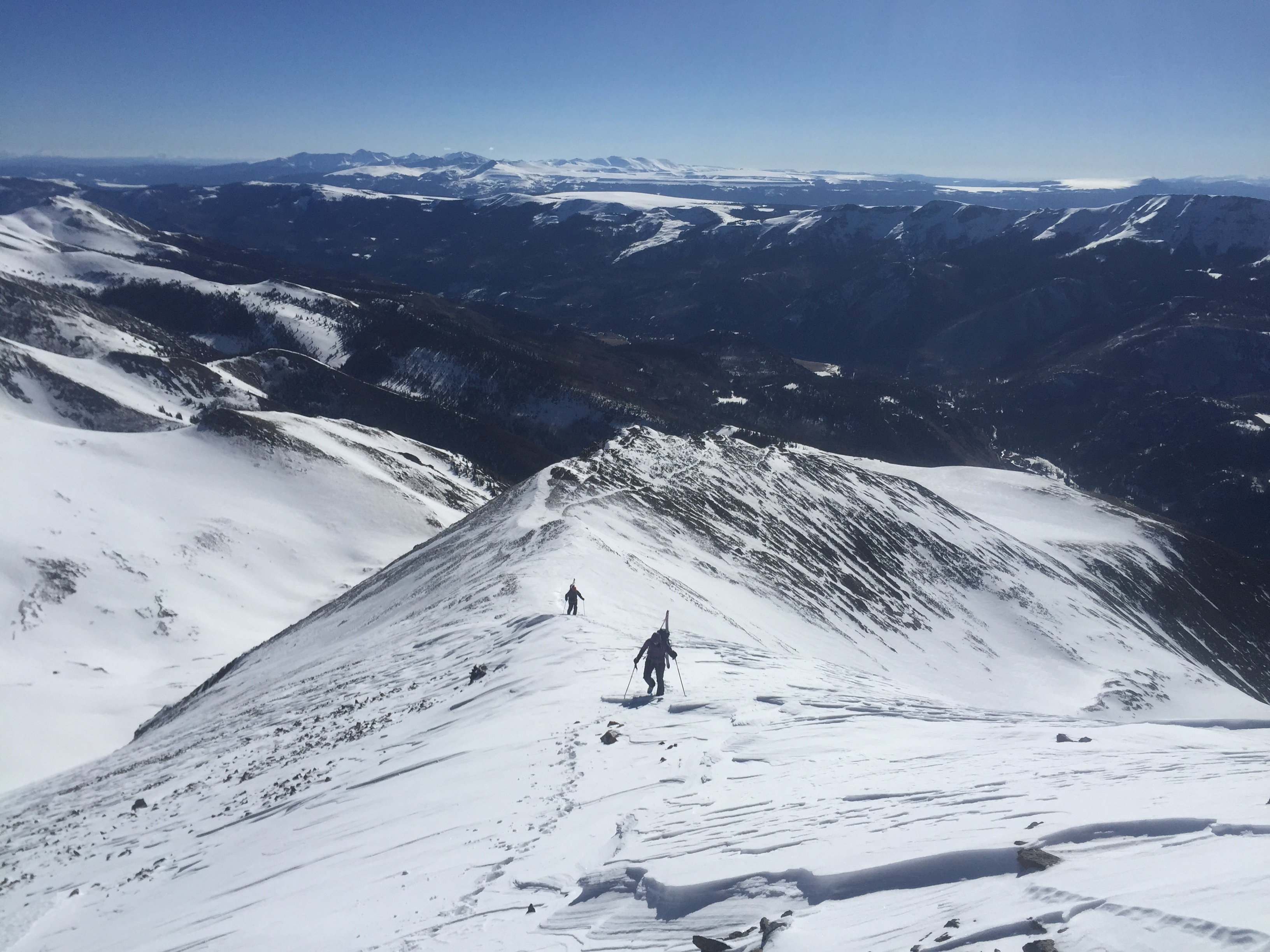 final pitch to the top.

One more transition and it was a booter up the final east ridge pitch to the heavily corniced summit. We made the top around 915am and enjoyed stunning views. 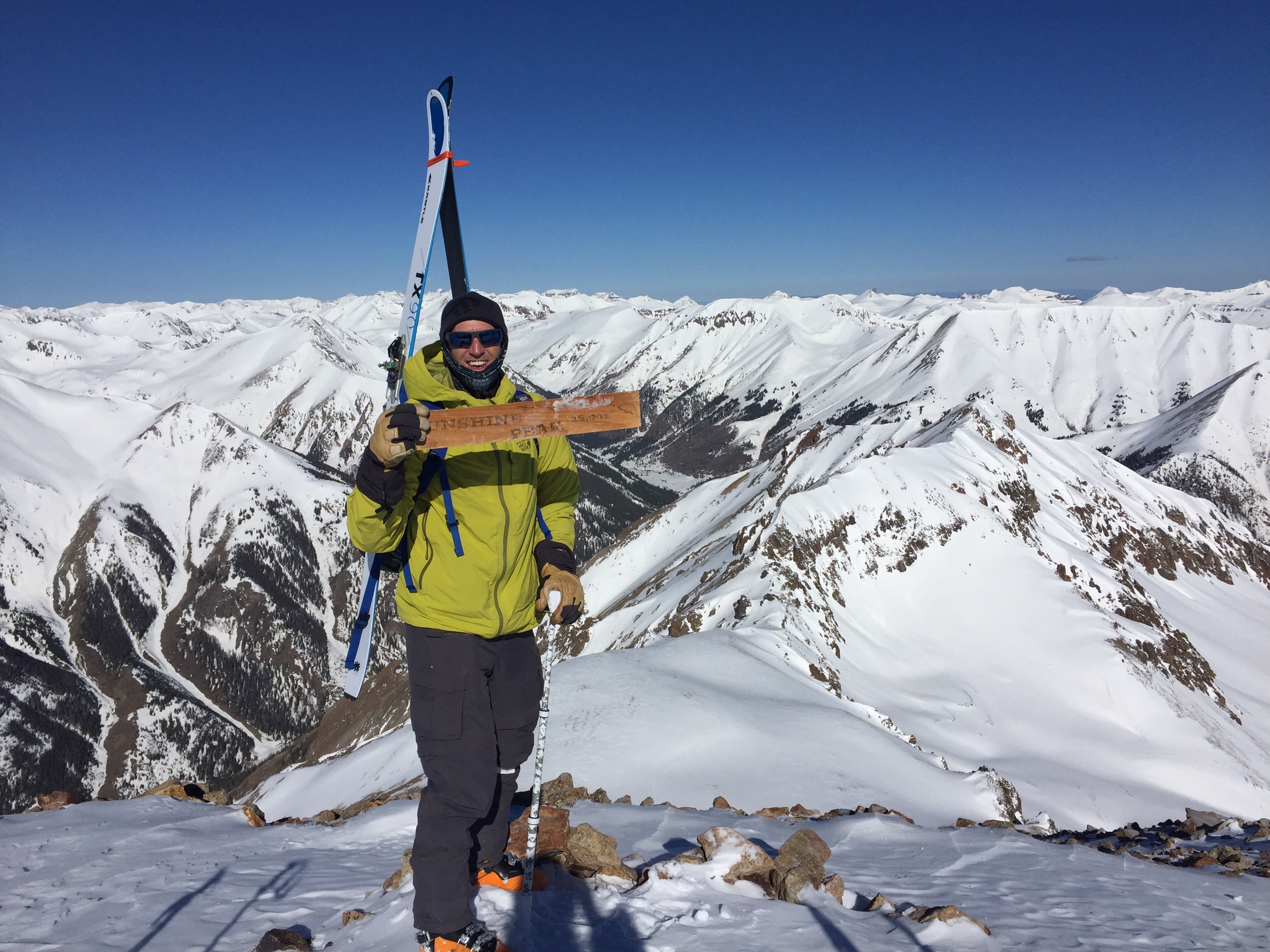 The first summit was in the bag and from there we could see where we had to head to next, north to Redcloud. 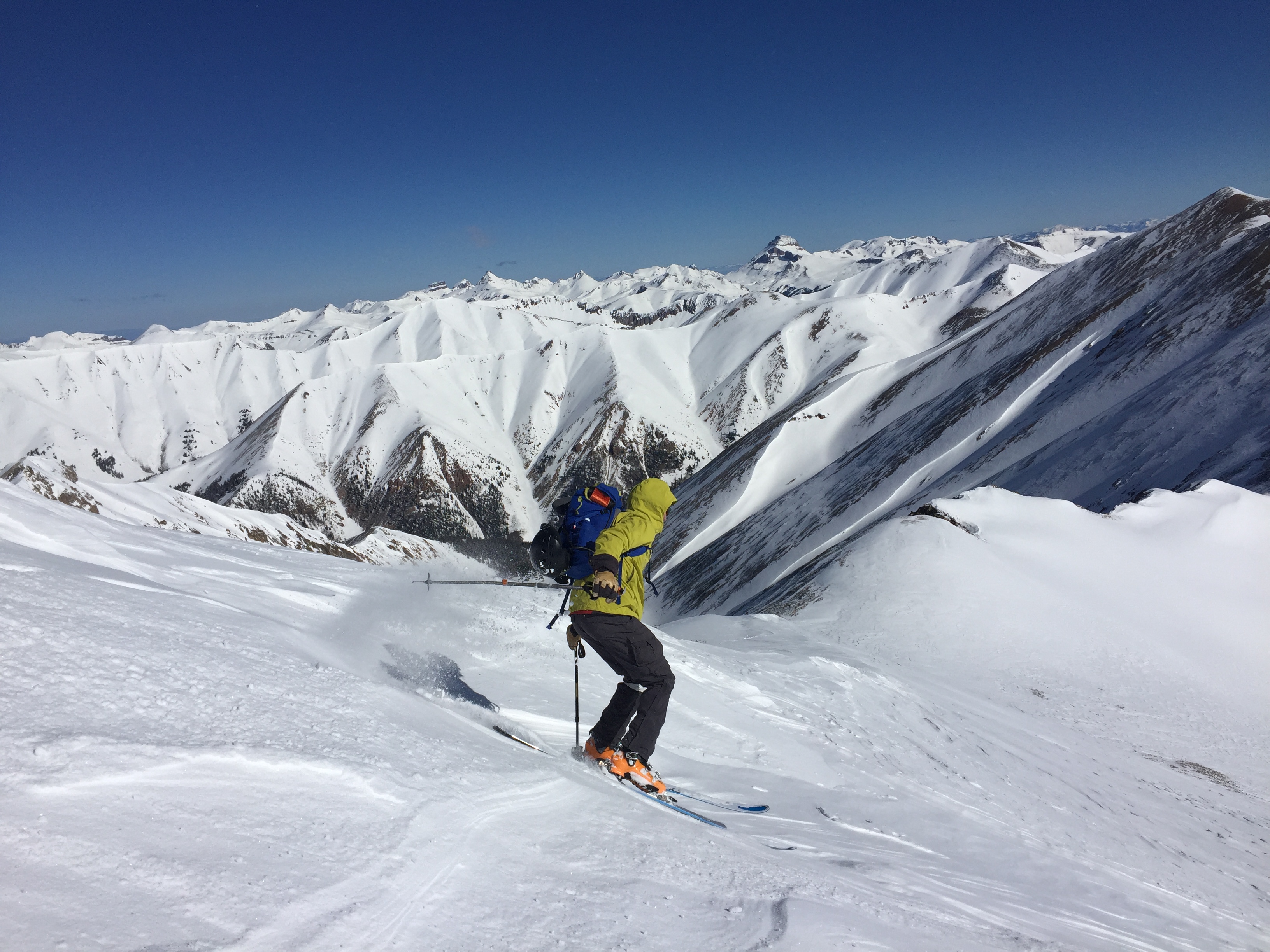 Making turns off the north aspect from the top.

Clicking into my skis I dropped into the north face of Sunshine and we quickly followed the ridge towards the saddle to Redcloud.

Great views north to Redcloud and to Uncompahgre and Wetterhorn far off left. 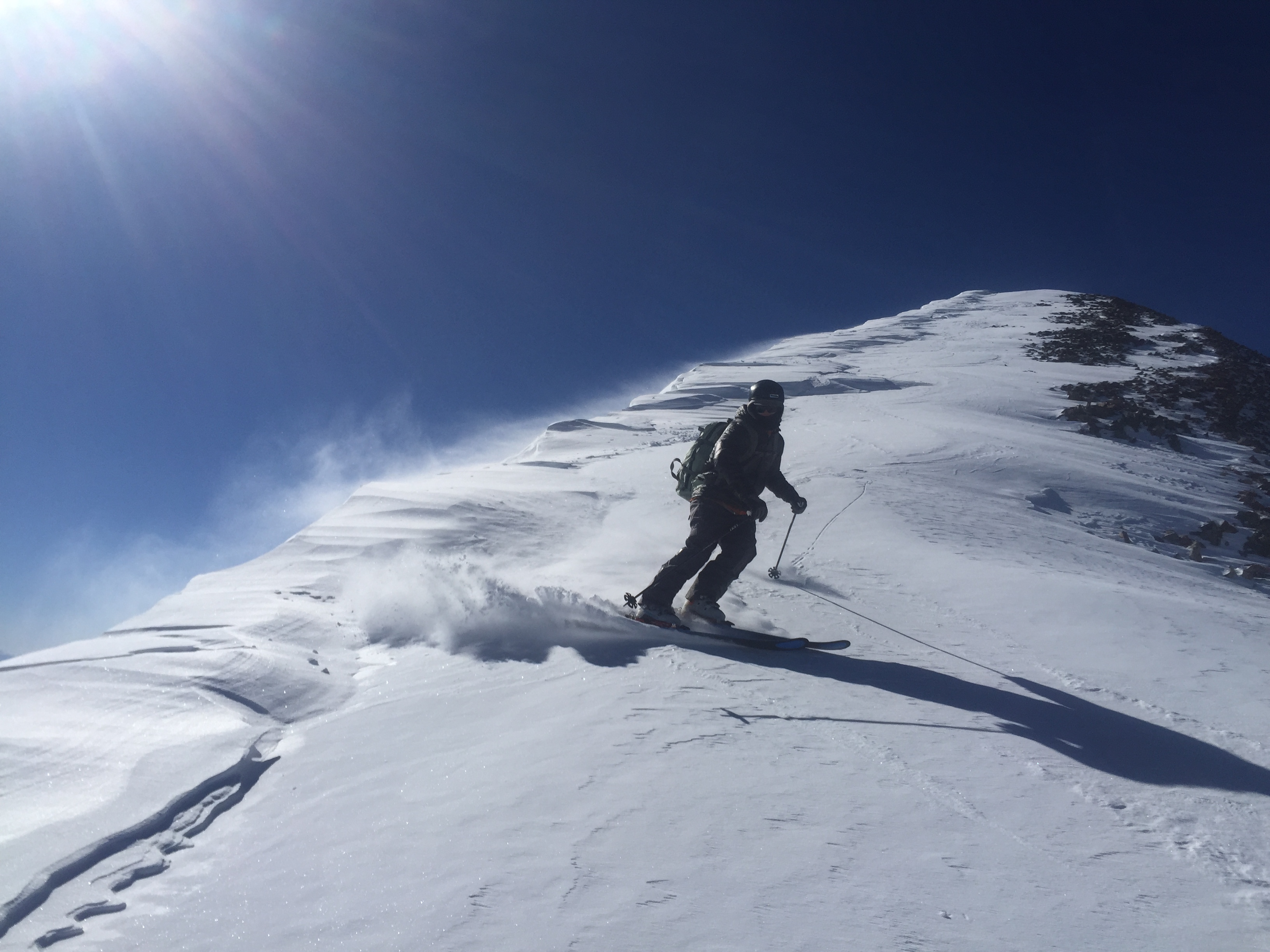 Just before the saddle we took a break out of the wind on the leeward side of the ridge. (Story continues on the Redcloud Page).