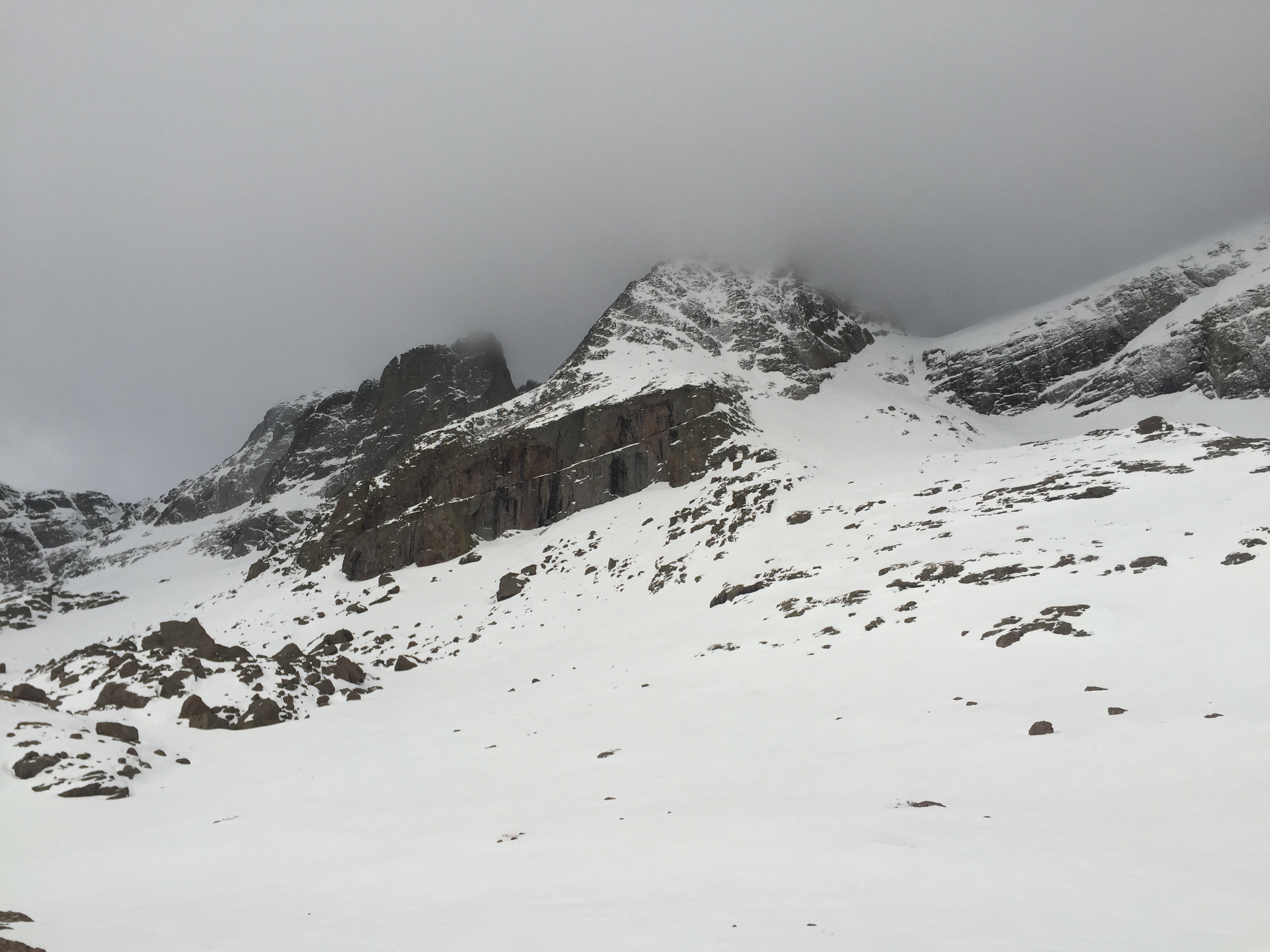 Kit Carson from the basin- fog rolling in!

All I know is that breaking my own trail sucks. I did that for five peaks in a row the week prior and it took a lot out of me.

Walking along early and in the dark up the Willow Lake Trail towards willow lake and Kit Carson I was thinking I would probably have to break trail again for myself up high. 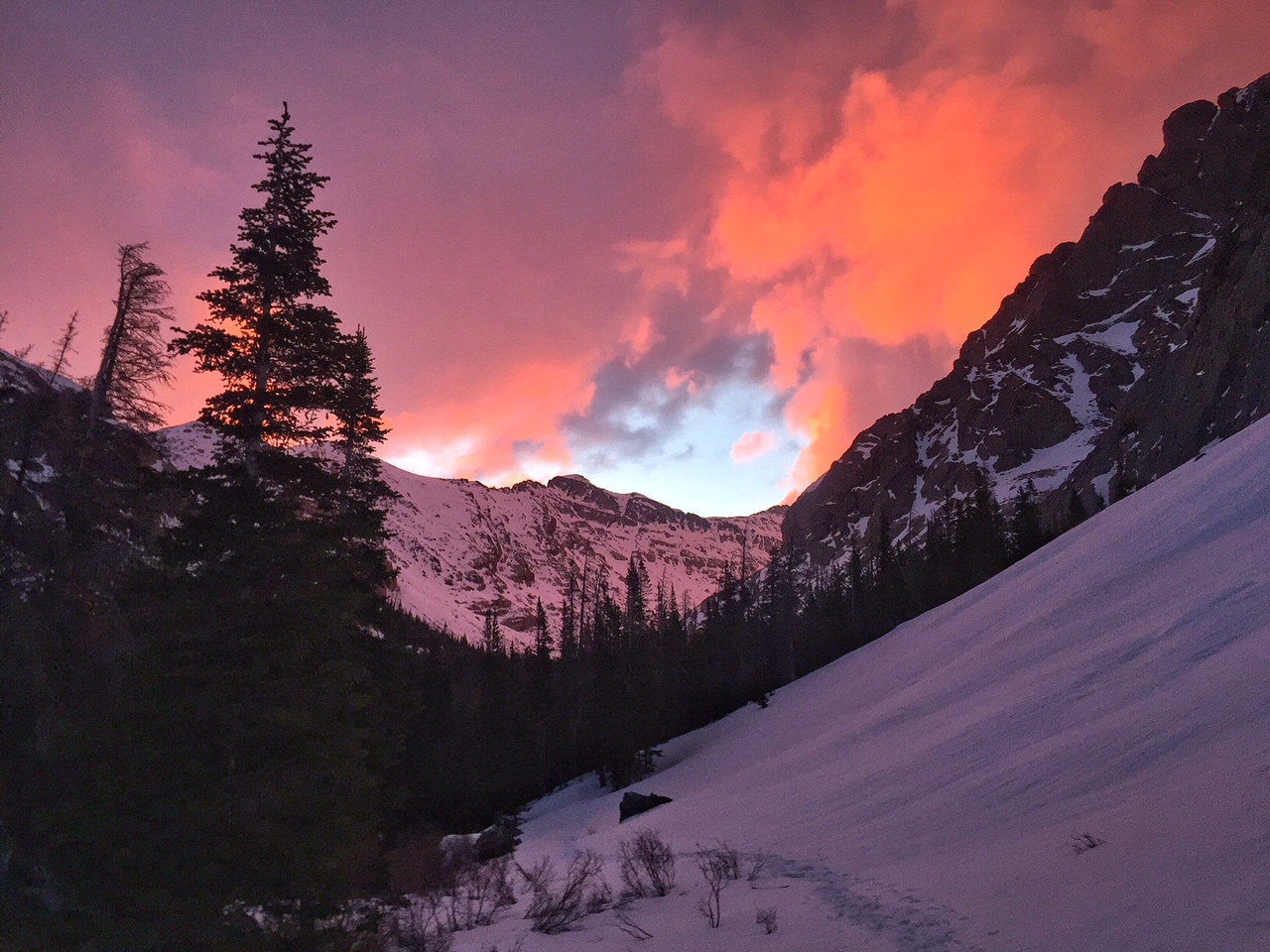 I witnessed a stunning sunrise and quickly made my way past the lake and into the upper basin below Kit Carson.

There was a storm system forecasted to come in later that day so the winds were already starting to kick up.  The peak was already in fog clouds and I honestly thought I would just go over to the base of the OB Couloir and have a look at the couloir. 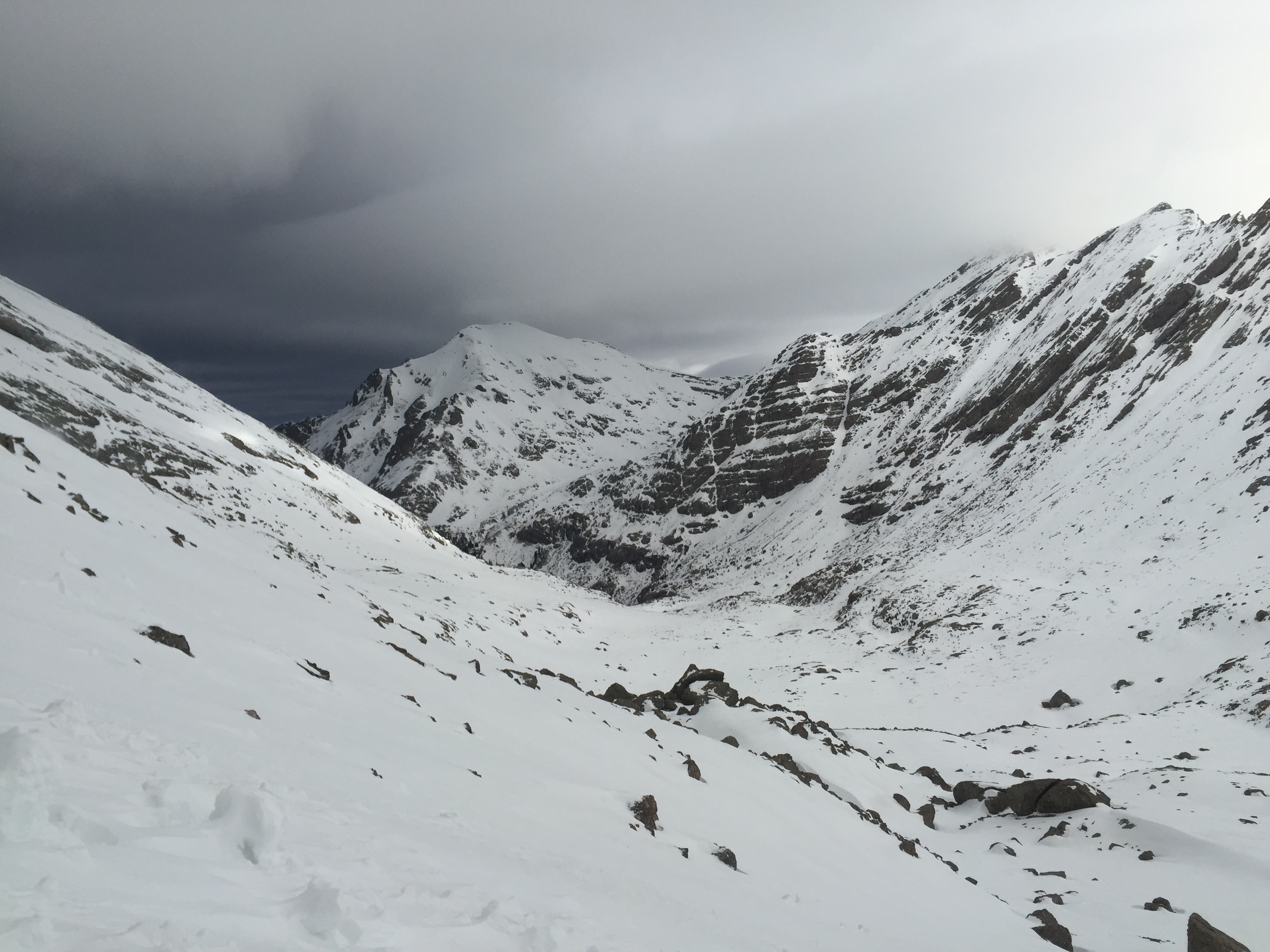 I had not climbed the peak from this route since I was in high school 20 years ago so I figured it would be good to check it out and then I would make a decision.  The day was eerily similar to my summit bivy in 2011.

When I reached the couloir bottom around 730 I took a break.  Things looked good, but the western and northwestern sky was looking ominous.  Not long after I was greeted by a nice young kid named Garrett.  He was camping in the basin the night before and his buddy Jay chose to sleep in. 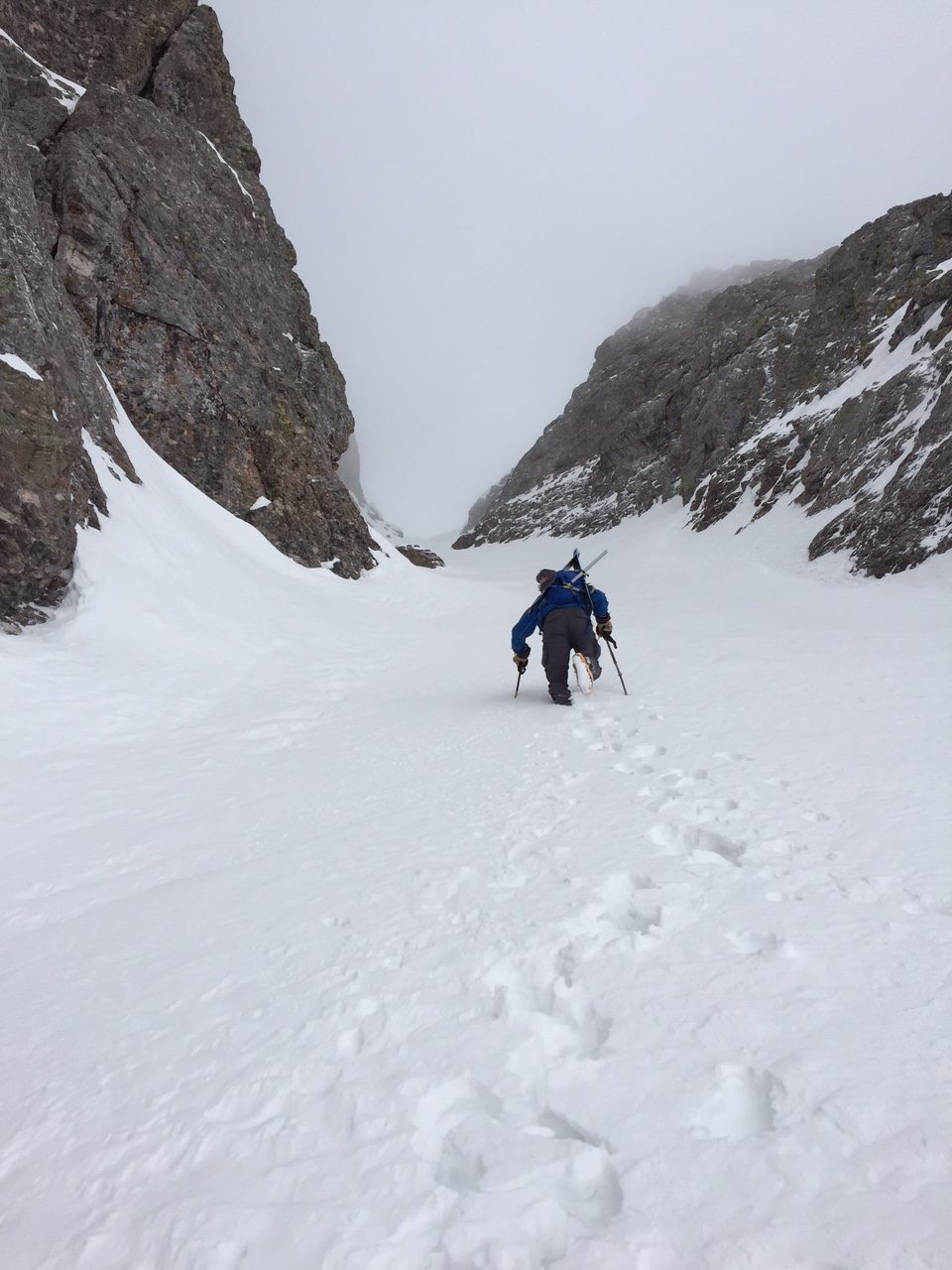 Shot of me heading up.

We decided to give the couloir and the peak a go, after all, I could always click into my skis and get down super fast.

Garret coming up the couloir.

We traded breaking trail in the deep powder of the north facing couloir.  The toughest part was the top, sneaking past the cornice on the left but things were stable. 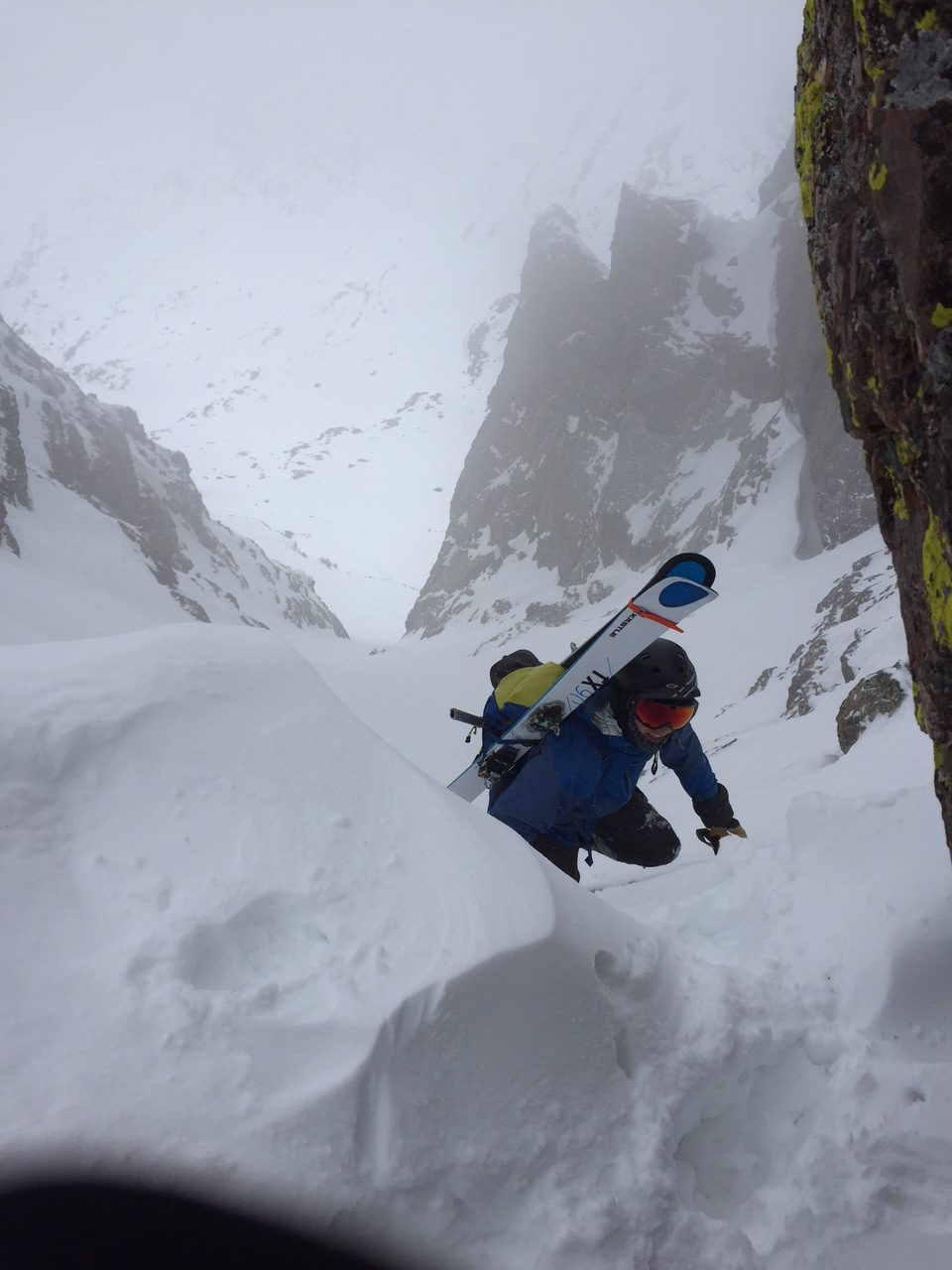 Sneaking past the cornice at the top of the OB. 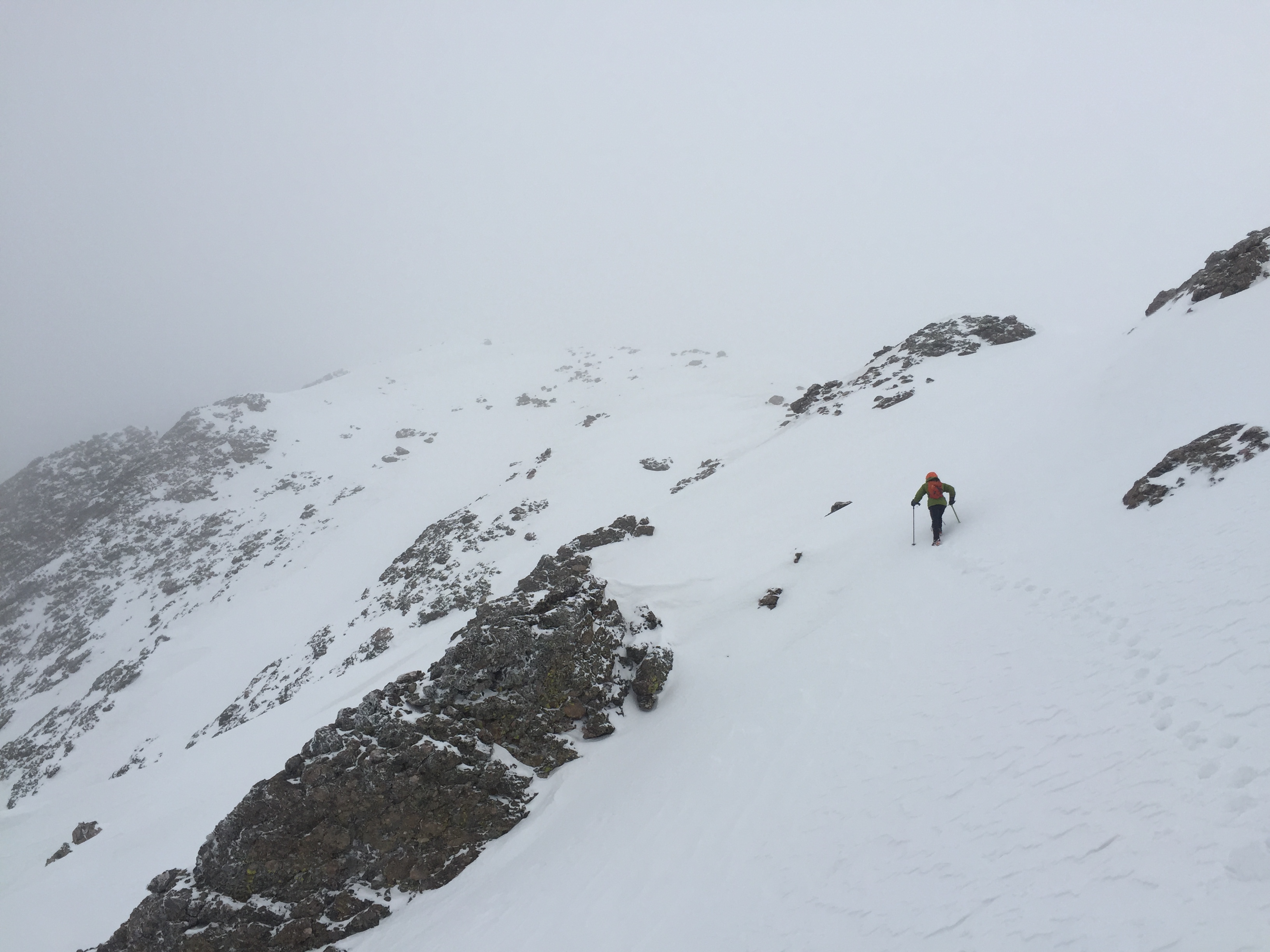 Garrett traversing towards the top.

Once on the ridge we stayed on the left side, bypassed some towers and rocks here and there and made our way to the summit by just before 10am. What a great climb with a great partner! 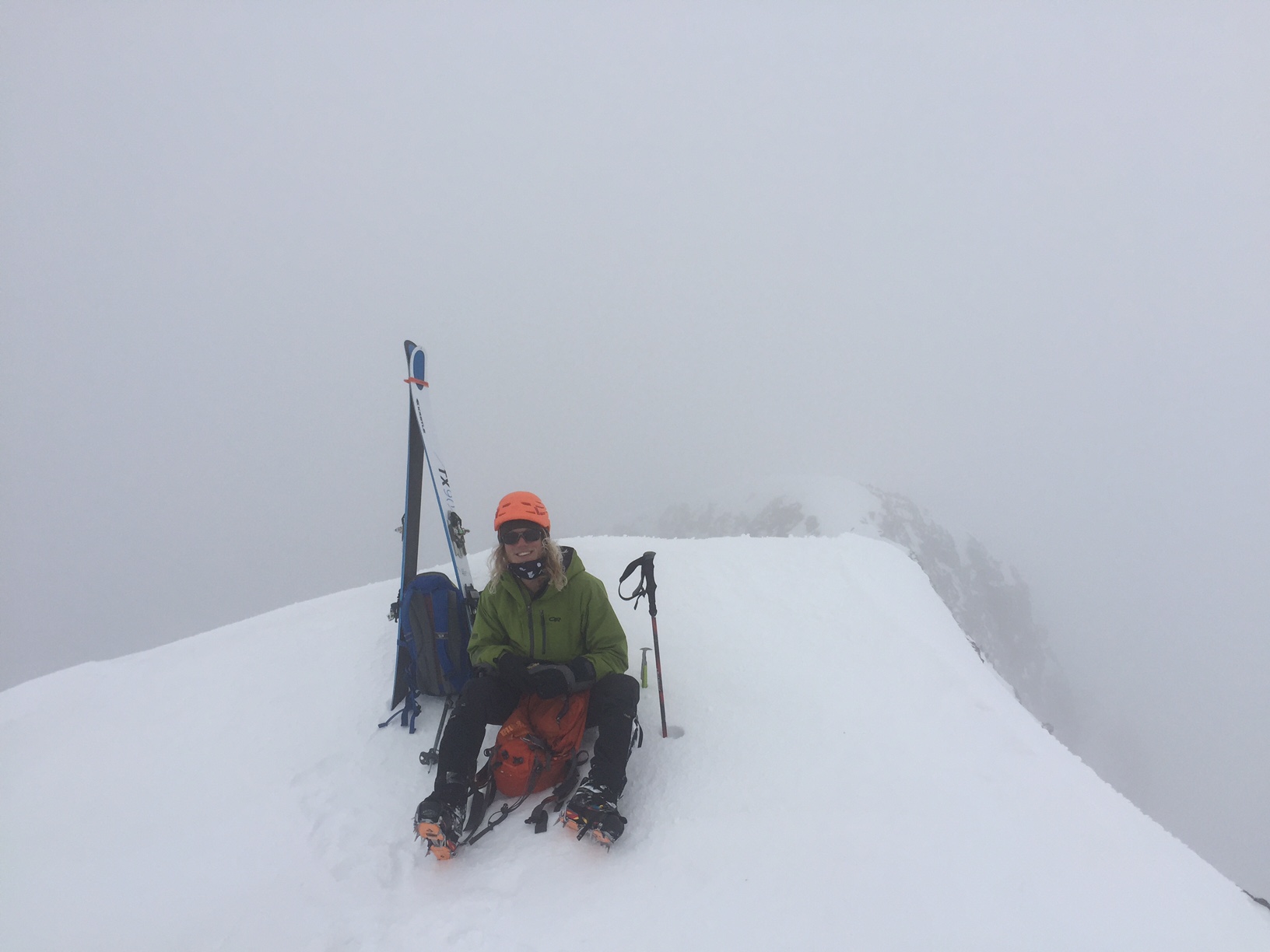 I got a good weather update from Chris, most of the storm was on radar staying to the north and northwest, so we had some time. 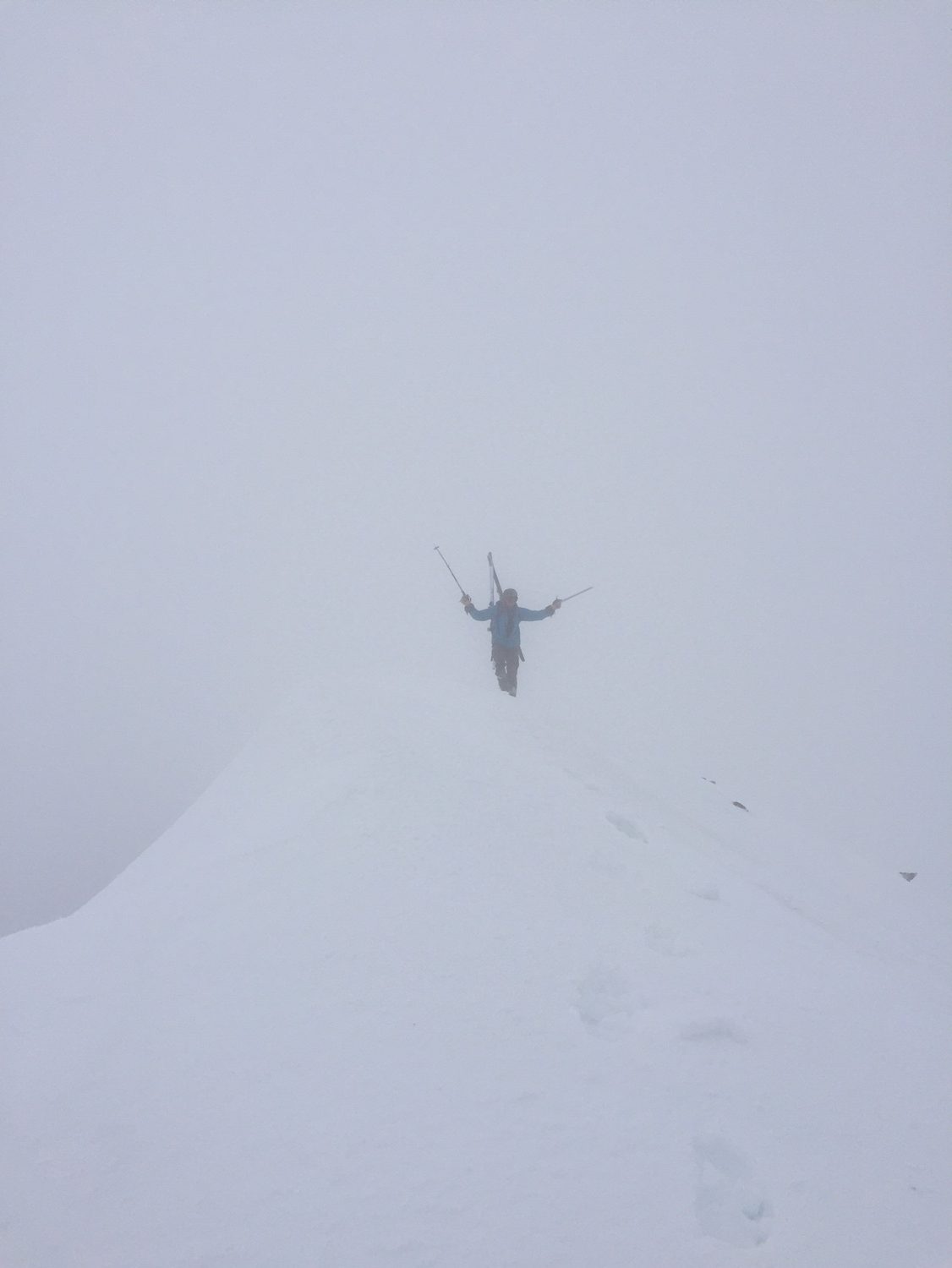 The short stroll to the top.

After some photos I clicked in and skied right off the top- but used caution traversing the ridge back to the top of the OB.  I fit a few turns in here and there and made it all work!  I was confident on the ridge and the upper face because I had skied from Kit Carson last year in 2015 as well, so it wasn’t my first rodeo up here. 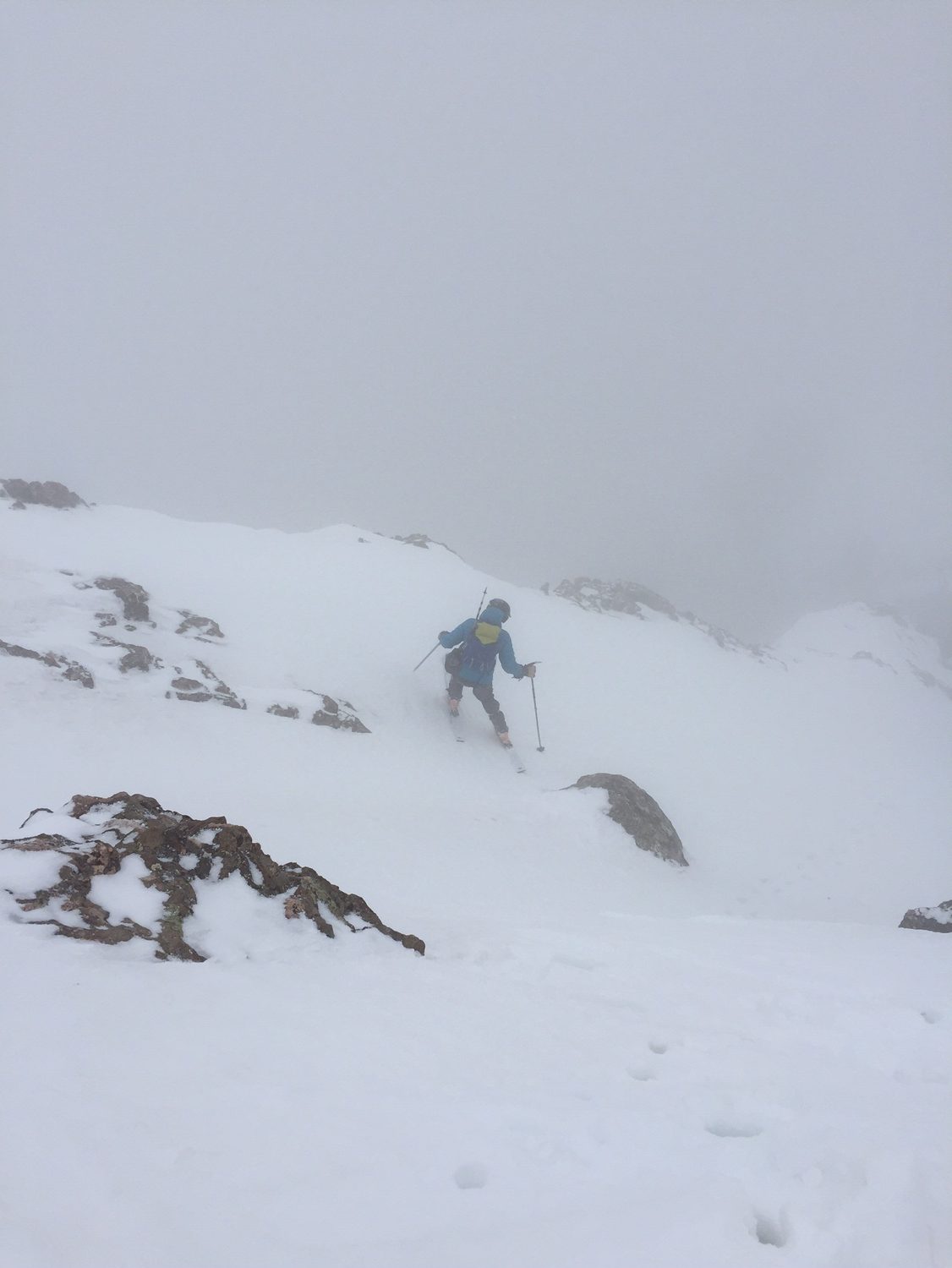 Fitting a few turns in on the ridge on the way back to the top of the OB. 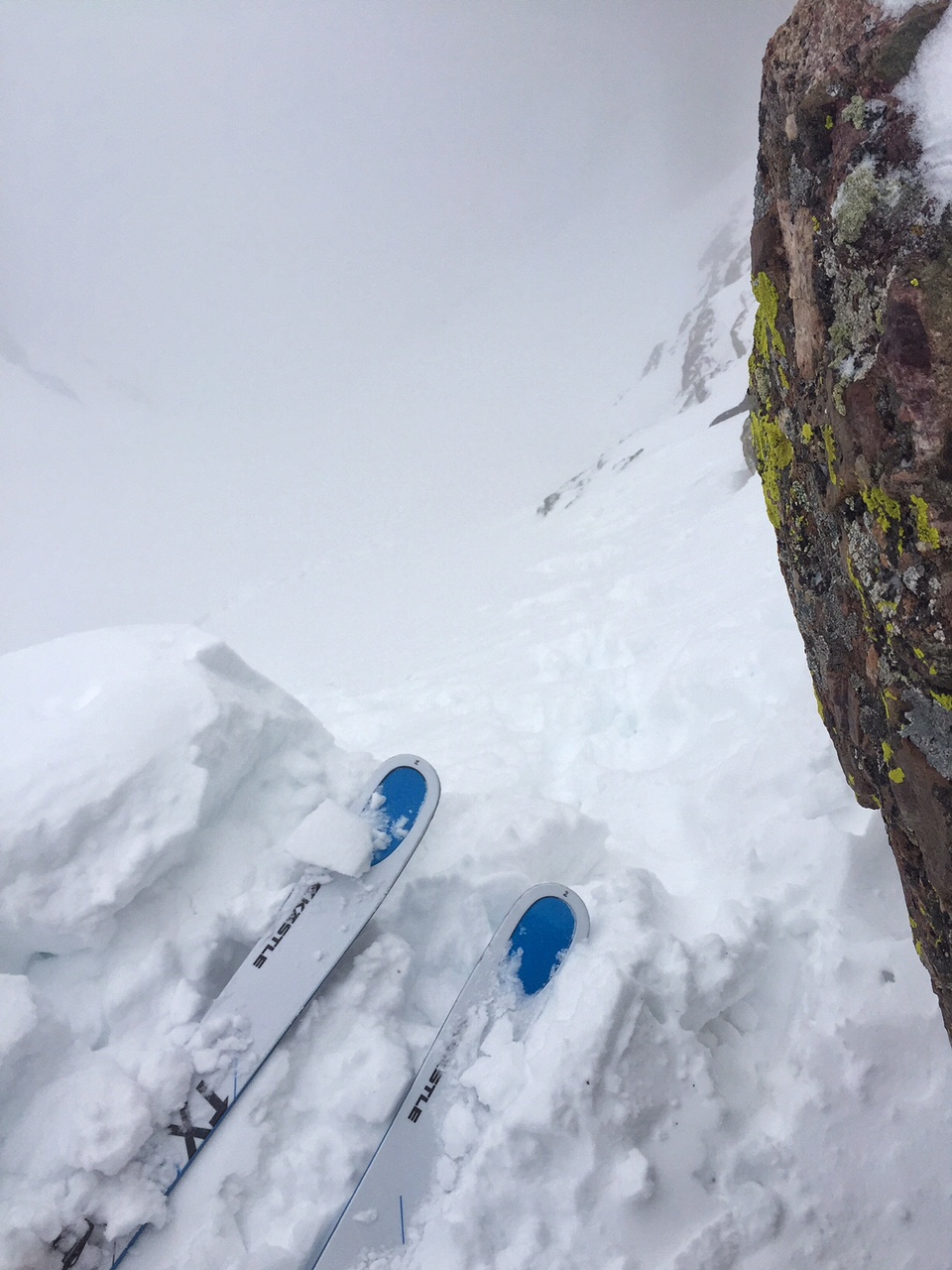 Getting ready to drop into the OB Couloir.

Once off the ridge on the decent, I got to open things up in the couloir- Garrett captured a spectacular shot of me dropping into the fog below from the top of the Couloir.

The north facing snow was awesome and I was in the basin in no time. 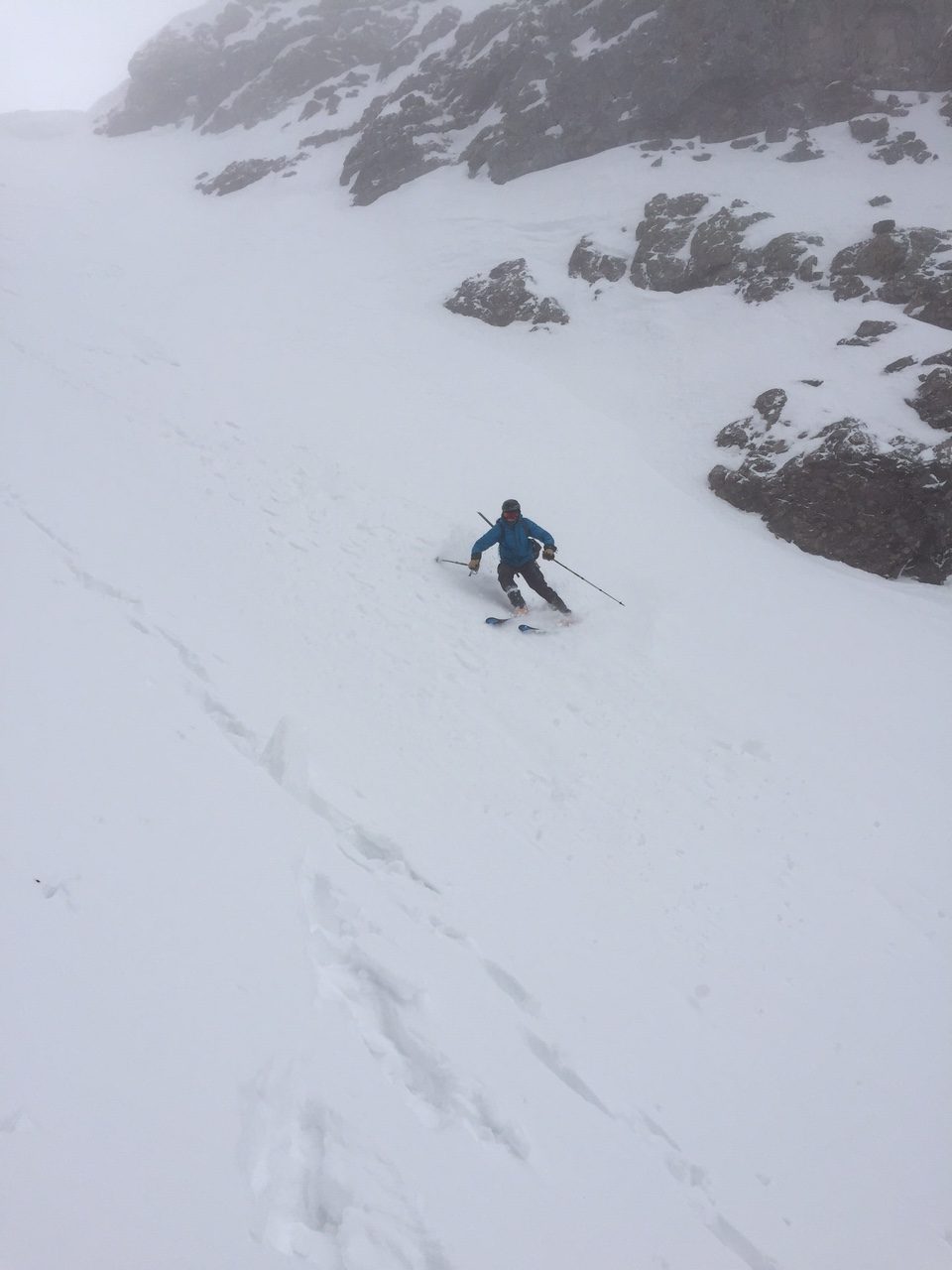 Opening it up to ski the Couloir, awesome turns!

I visited with Jay as Garrett came back to their camp and then I high tailed it down into the basin and back to the car by 1pm before the afternoon storms rolled in.  What a great classic way to ski Kit Carson and more importantly close out the Sangre De Cristo Range of 14ers!

Thanks for Following Along!