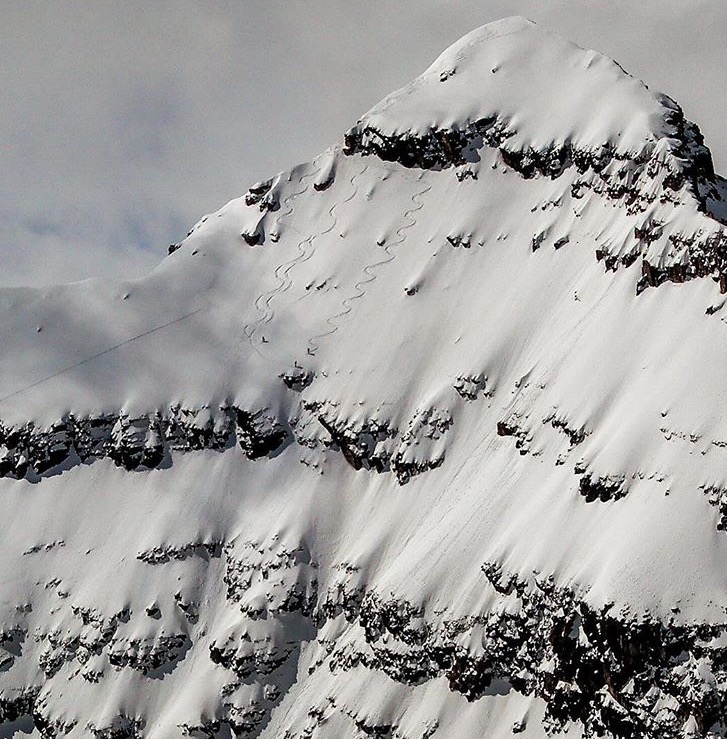 I drove over late on Wednesday night to link up with a couple of skiers that have inspired me to ski and push myself to the next level from the very beginning- Chris Davenport and Ted Mahon. Knowing that the North Face had some great snow on it, we put together a plan on Wednesday to start Thursday morning from Maroon Lake. We would go fast and light. Chris has skied the North face 6 or 7 times and Ted several times himself, so as I tried to fall asleep once I had driven over to the Trailhead for an early start I couldn’t help but feel like I would be in the company of legendary ski mountaineers and would be able to settle in and really enjoy an awesome ski-mountaineering objective. 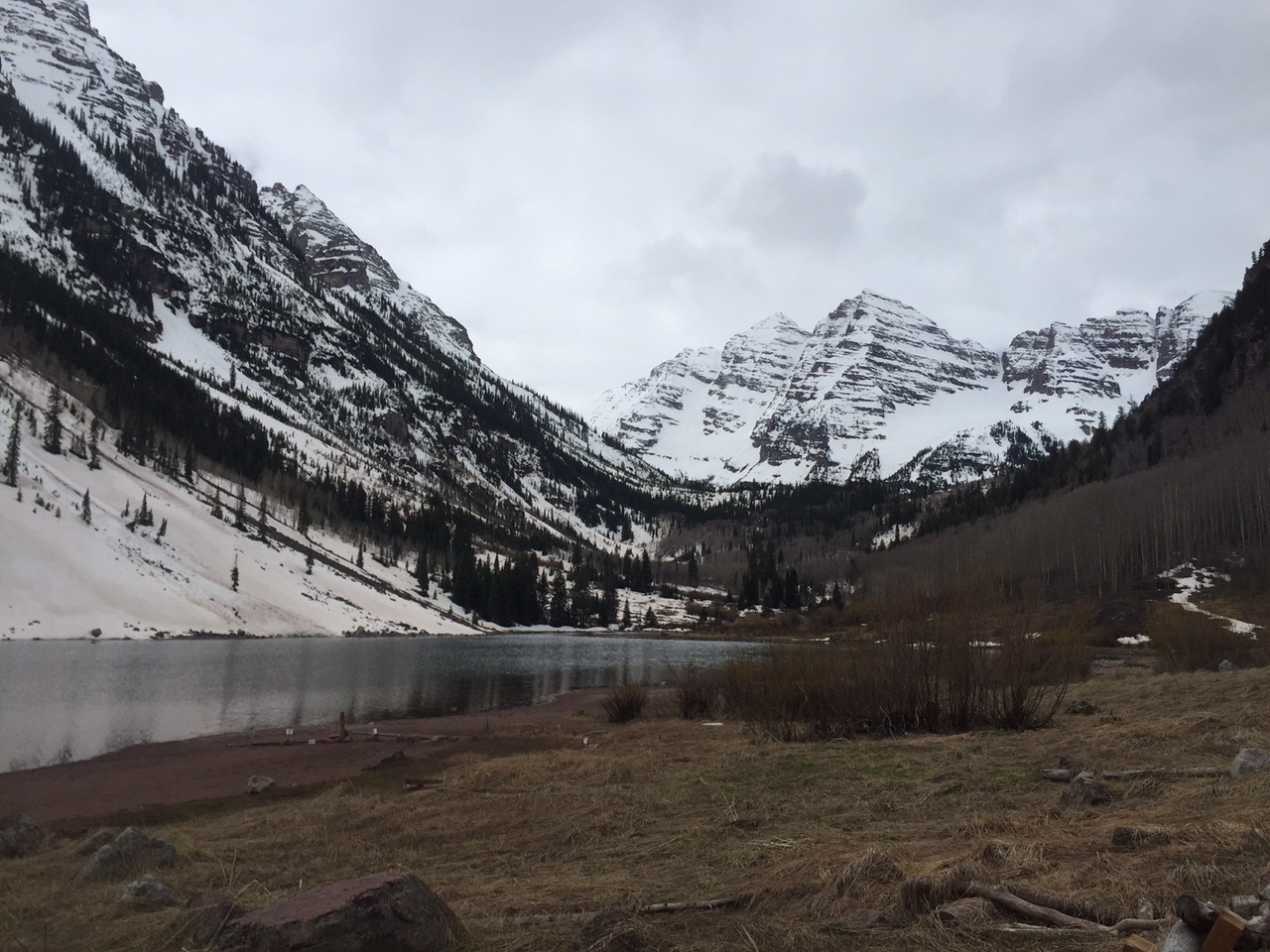 The bells from Maroon Lake in Mid May.

We rolled out of the Maroon Lake parking lot and past the lake at about 445am. It was one of my latest starts in a long time over the past several weeks because we knew the North Face wouldn’t get as warm as south aspects. Near Crater Lake first light was already upon us in the first half an hour.

In approaching North Maroon, we crossed an avalanche chute on the way past the Lake when first ascending to Buckskin pass. Chris popped off one of his bindings and actually thought he broke it. For the first minute or so, Ted and I were bummed- and we hoped that the binding would still hold. Fortunately a piece was broken off but the binding still functioned….. or at least we would find out up on the peak!

Pyramid Peak during the Magical hour as we ascended above the creek.

It was a spectacular morning in some nice magical hour colors and we ascended the slopes to the rock glacier (covered in tons of snow) and then to the base of the North face. The face was caked, but definitely a bit intimidating. Essentially there are a bunch of ledges and snowfields that can be skied cleanly all the way to the bottom with a series of traverses as well. 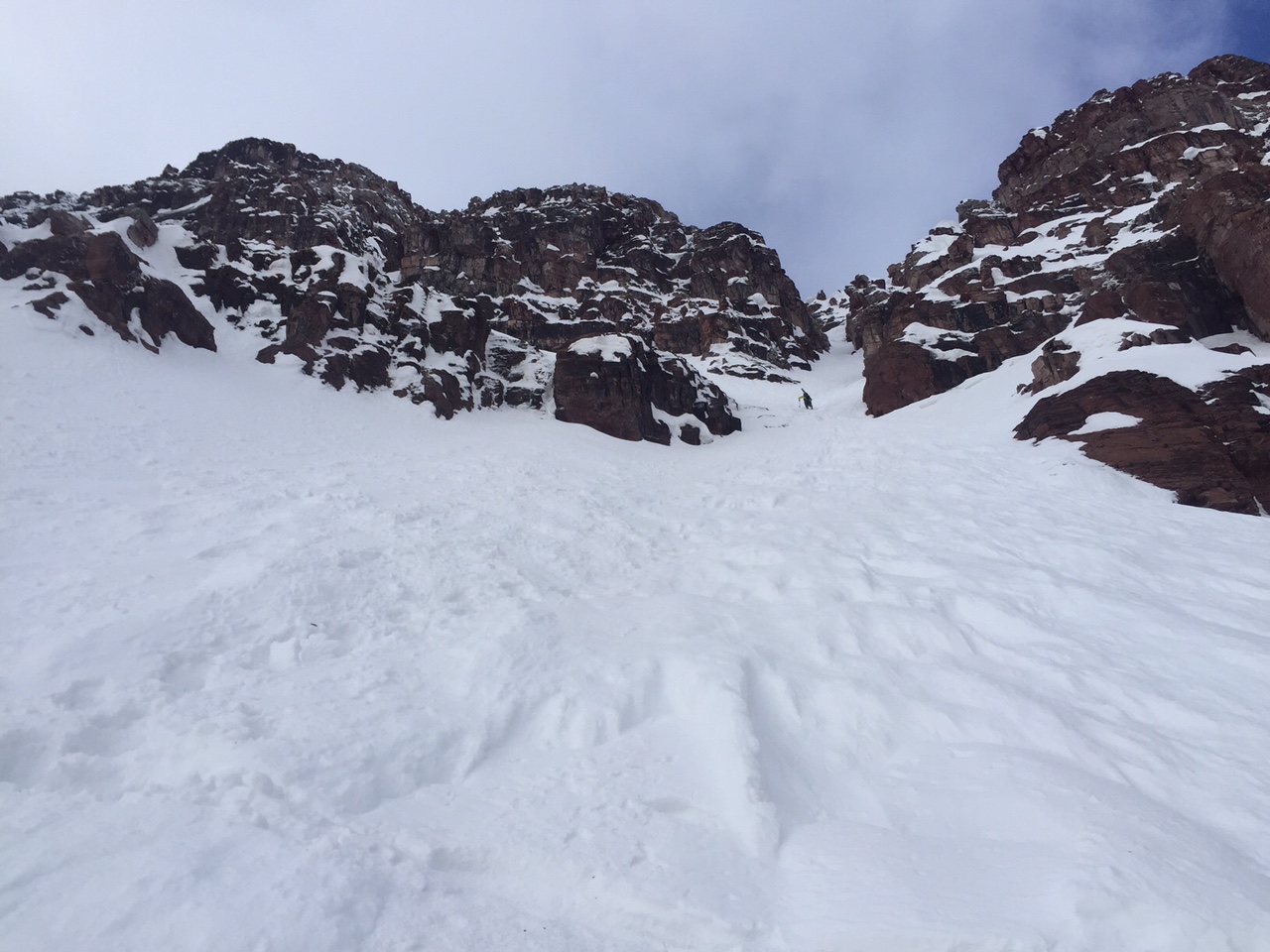 Ascending to the couloir.

But in order to ski we had to climb up the peak first. Knowing that the face would be pretty exposed and relatively soft, we chose the couloir just to the left of Gunsight Couloir and climbed it to the northwest ridge. 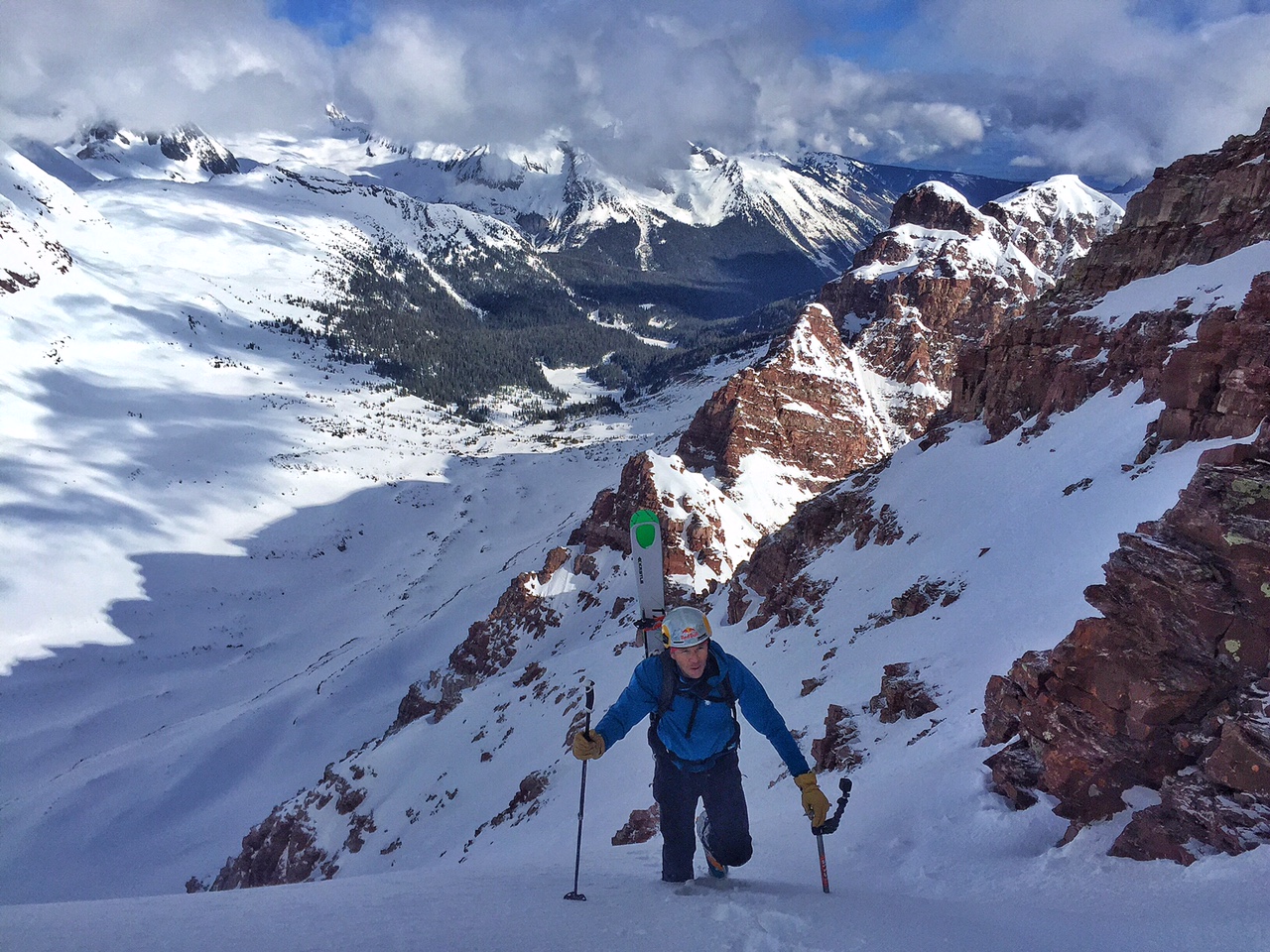 Chris climbing on the backside of the ridge, Fravert Basin Below.

Once we gained the ridge we traversed and series of cliffs to find our way around to the back and up a final steep couloir. The clouds lifted a bit as we traversed for the final 45 minutes and the backdrop was impressive: Fravert Basin far below us, South Maroon popping out as well as Capitol and Snowmass. 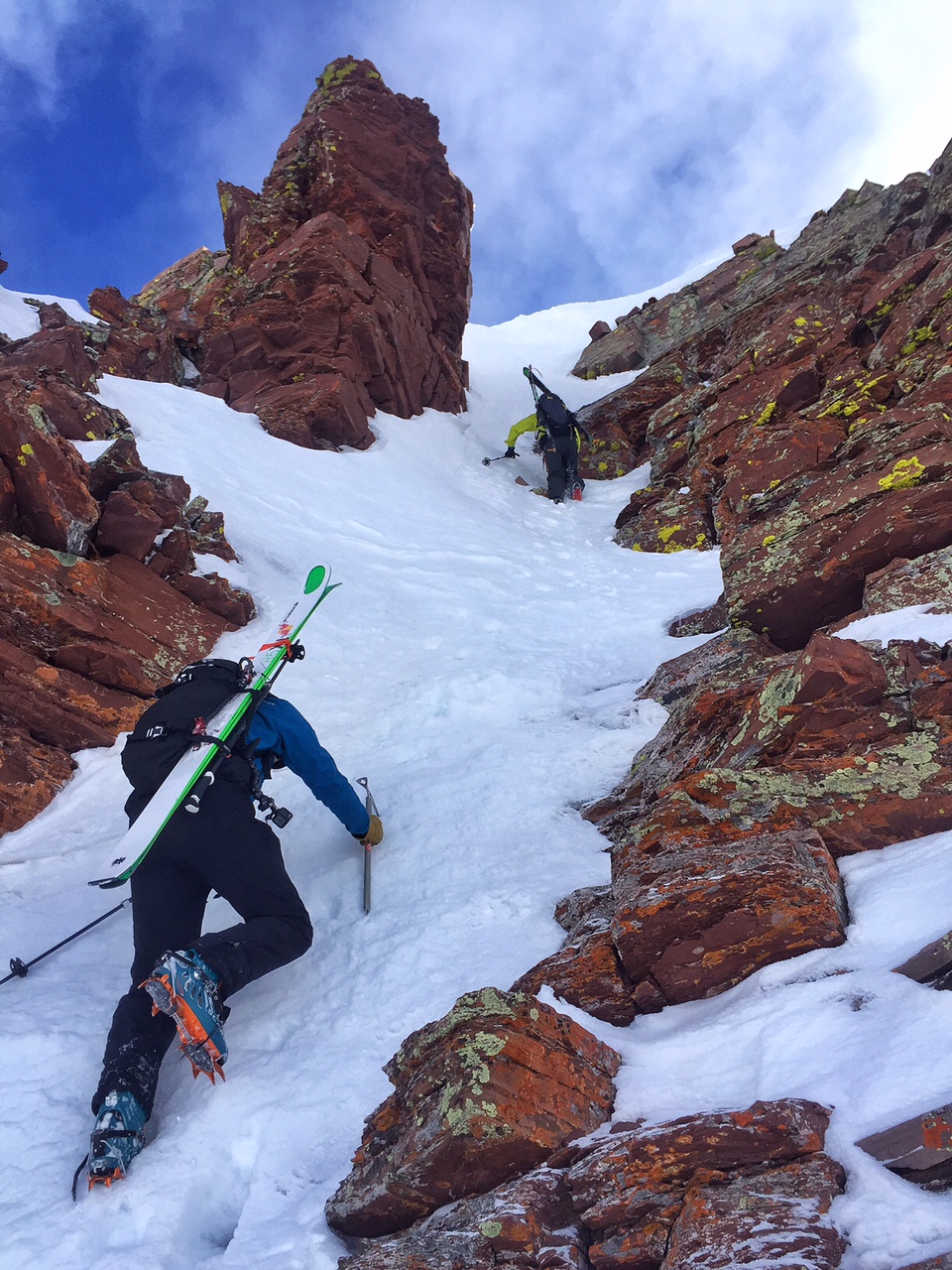 The final pitch up to the ridge was a fin snow climb. We easily walked up the final 100 yards to the top and enjoyed a calm summit at 9am. 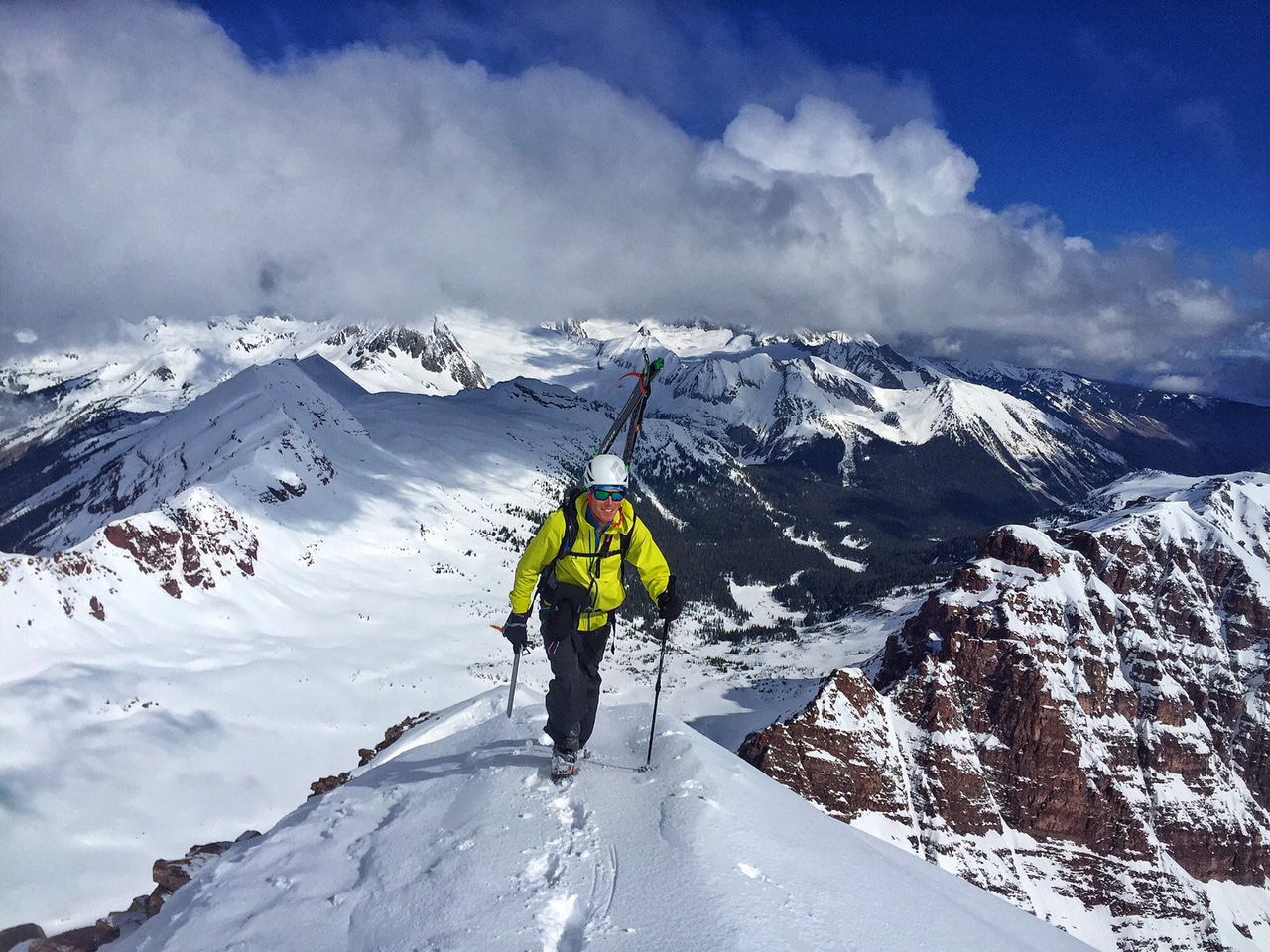 Ted taking the final steps to the top. 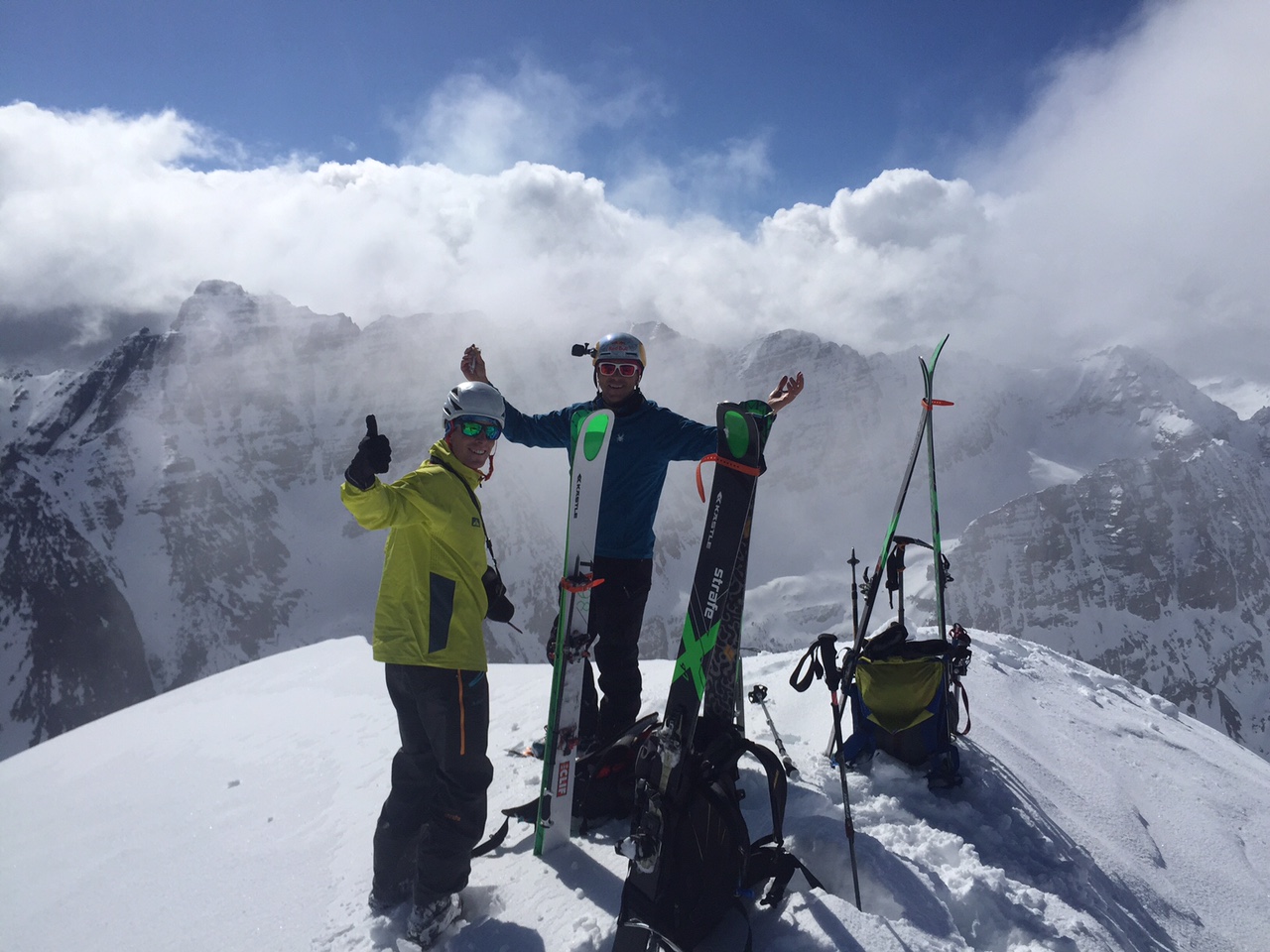 After the usual high fives, snacks, and photos, we clicked in and get ready to ski. I almost didn’t put my helmet camera on my head but Chris and Ted both insisted I did, so I filmed the entire descent- definitely something that Chris said “you better film this skiing, you’ll want to watch it when you are over 60 someday.”

That moment of film decision on the summit with Chris and Ted actually brings up a very important point, something that has actually taken me a long time to do well on this project: documentation. Just like I hesitated to take the effort to film on North Maroon, there have been several peaks on this project that I have not filmed and have not documented well. As is the case on EVERY peak that I have climbed in my career worldwide, my focus has always been more on getting up and back down safely.  Its precisely why I barely even have any photos from my summit day on Everest in 2012. (I realize now as I write this to post now that the project is over, its July Now. this is going to probably cost me any shot at the record and completeness of the project from that standpoint. However, I can describe everything to the best of my ability and just be honest about what has transpired).  In the end this project has been about climbing and skiing the peaks the best I can, and for anyone to question what I have done is of course probably going to happen, but all I can do at this point is put up what I have and go from there. 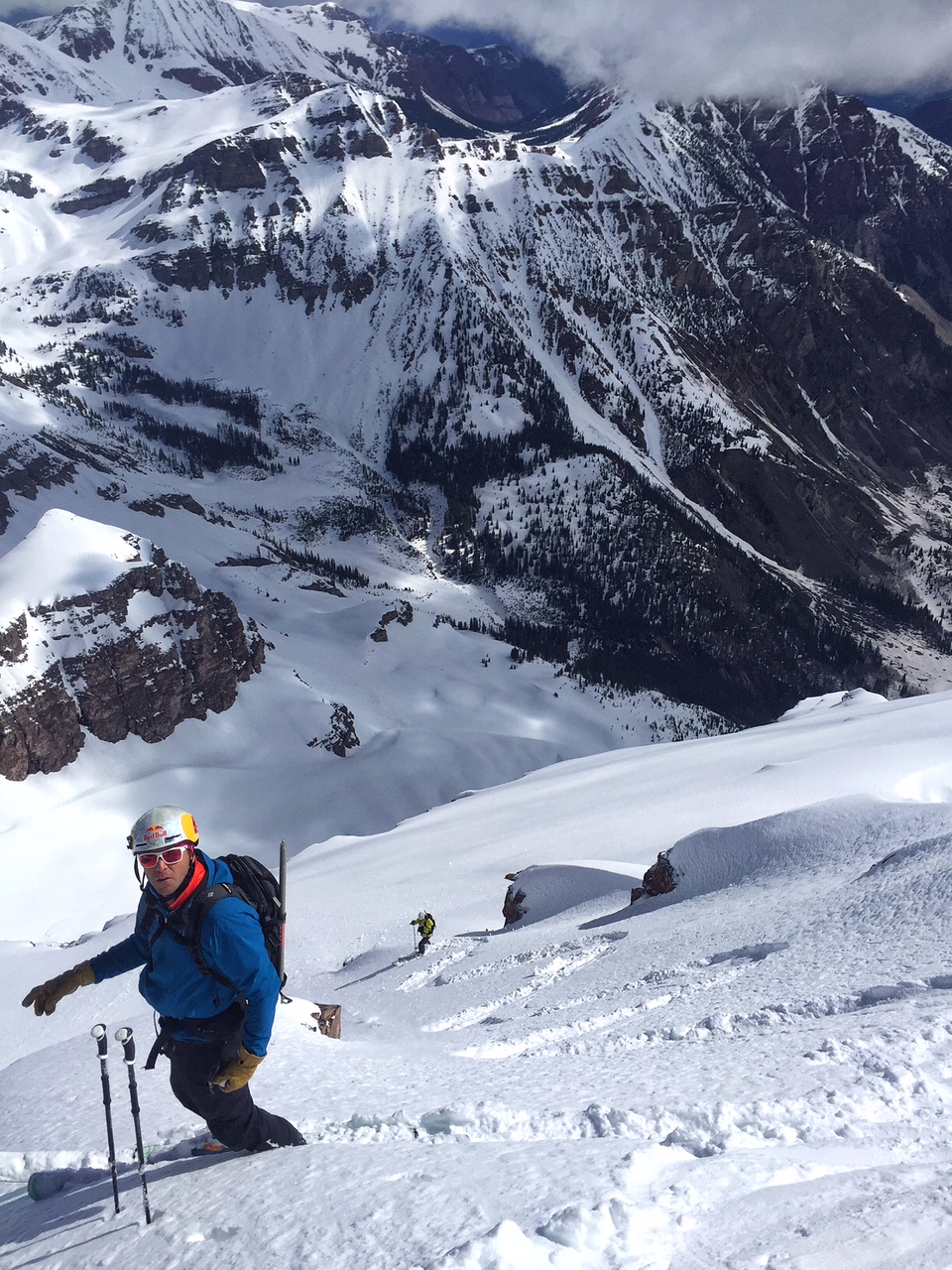 The face just below the rock band, choosing lines.

The start of the descent on North Maroon begins easy, with a traverse to the northeast ridge, and a skirting of the “punk rock” cliff band. Once you get past that with some interesting skiing on an awesome exposed spine, then we each took a fun line of powder below the band and skied lean for a few hundred feet. 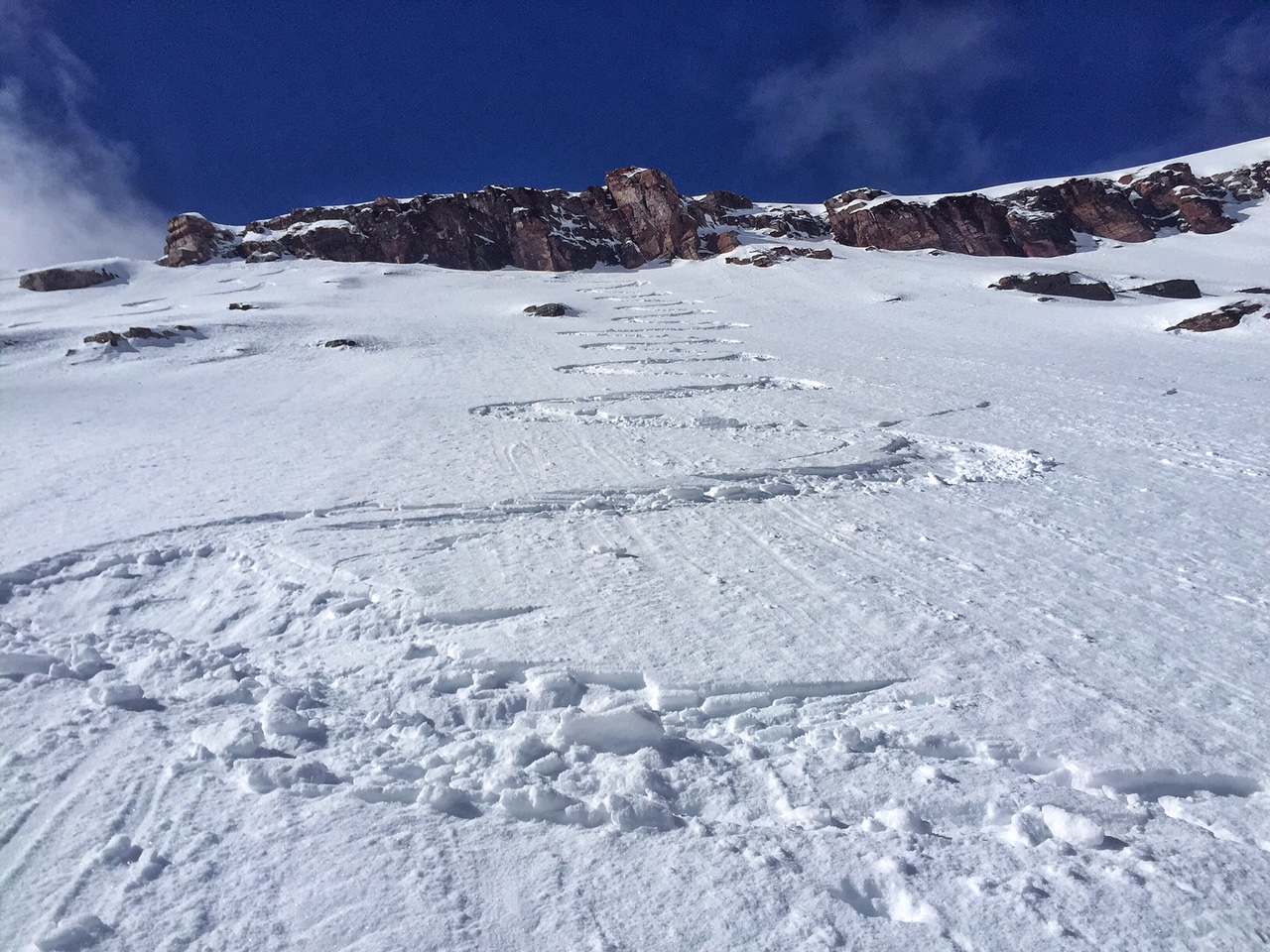 My turns as I paused to look back up to the Punk Rock band.

This was definitely my favorite part of the descent. In fact, a friend of ours, Jordan White Captured us on the face from a nearby peak to the north called Sleeping Sexton.

The maze of cliffs continued, but the snow stayed cold with mixed powder, crust and relatively good ski conditions. We took turns skiing sections and making sure to look out for snow sloughs and rocks, and to be careful. 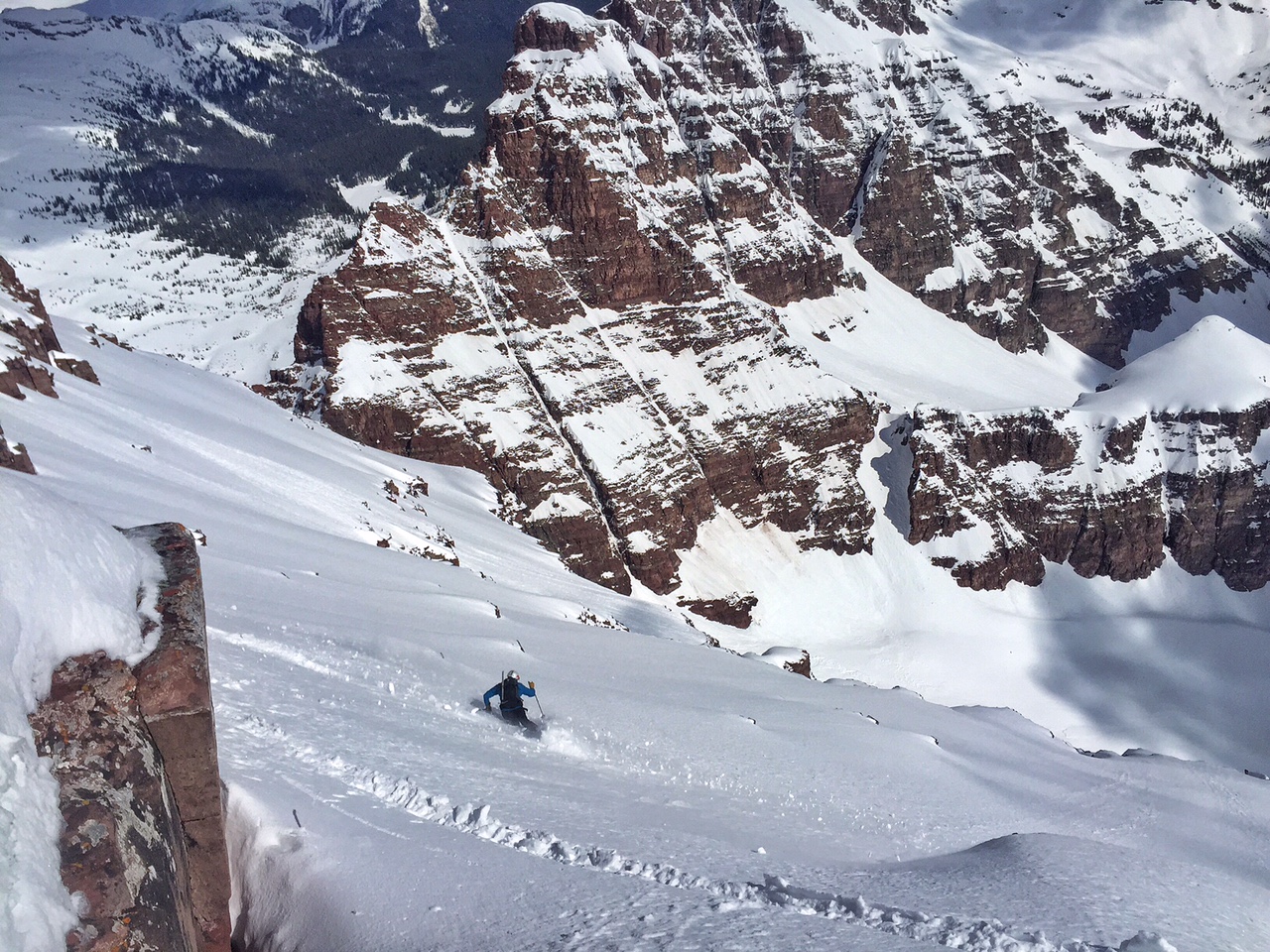 Chris opening things up on the face.

Part way through it it really hit me just how fun it was to be out on that face. It never felt too crazy, but the backdrop kept you on your toes and in awe at the same time. 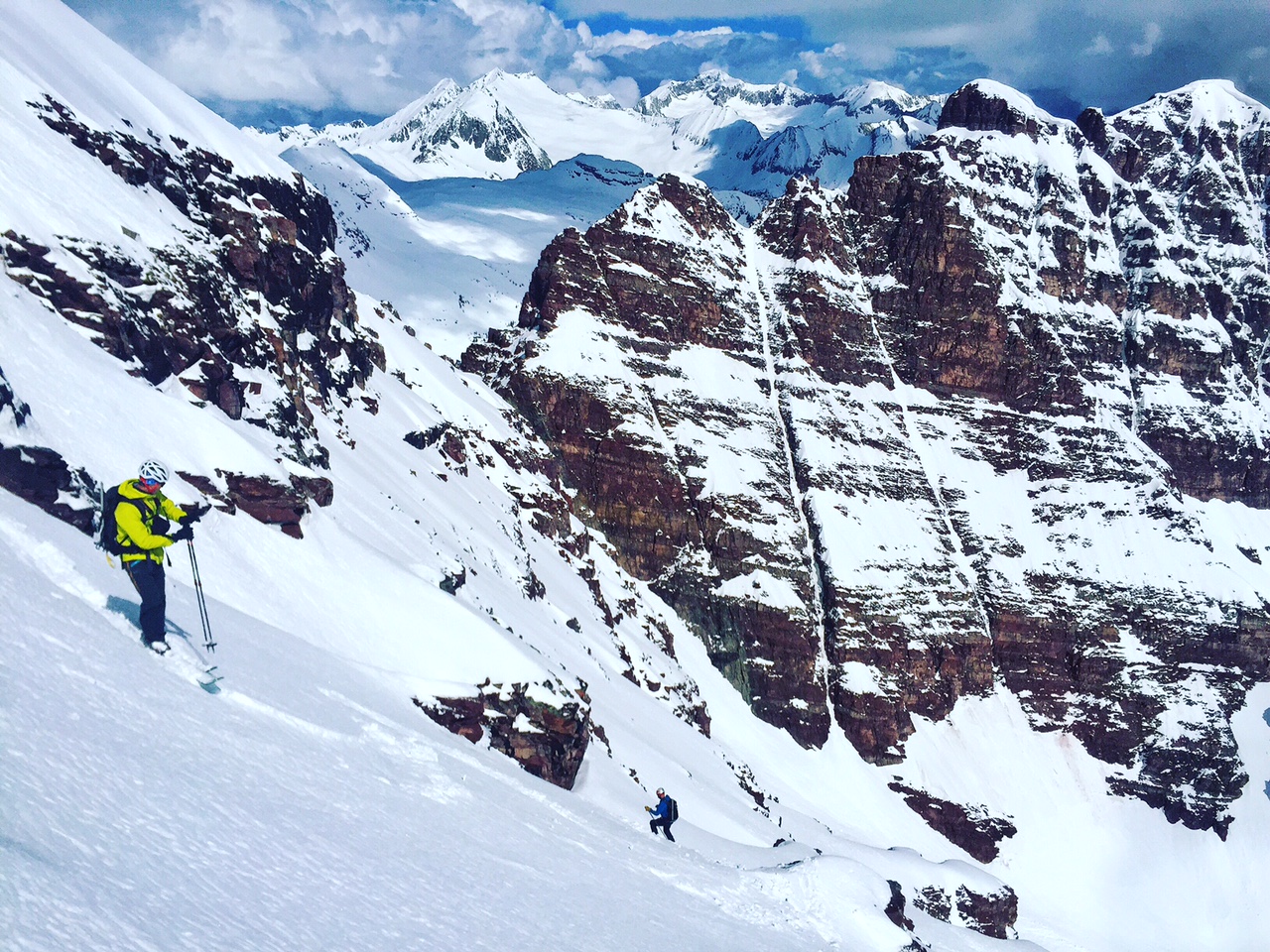 Halfway down the face, traversing the ledges in good powder in most places.

Near the bottom we had to traverse and hard left and ski back to the base of the original couloir that we had climbed. Then we opened it up at the bottom and were home free!   Some fast GS turns down the rock glacier and we paused for high fives and a brief photo and celebration= we had done it! 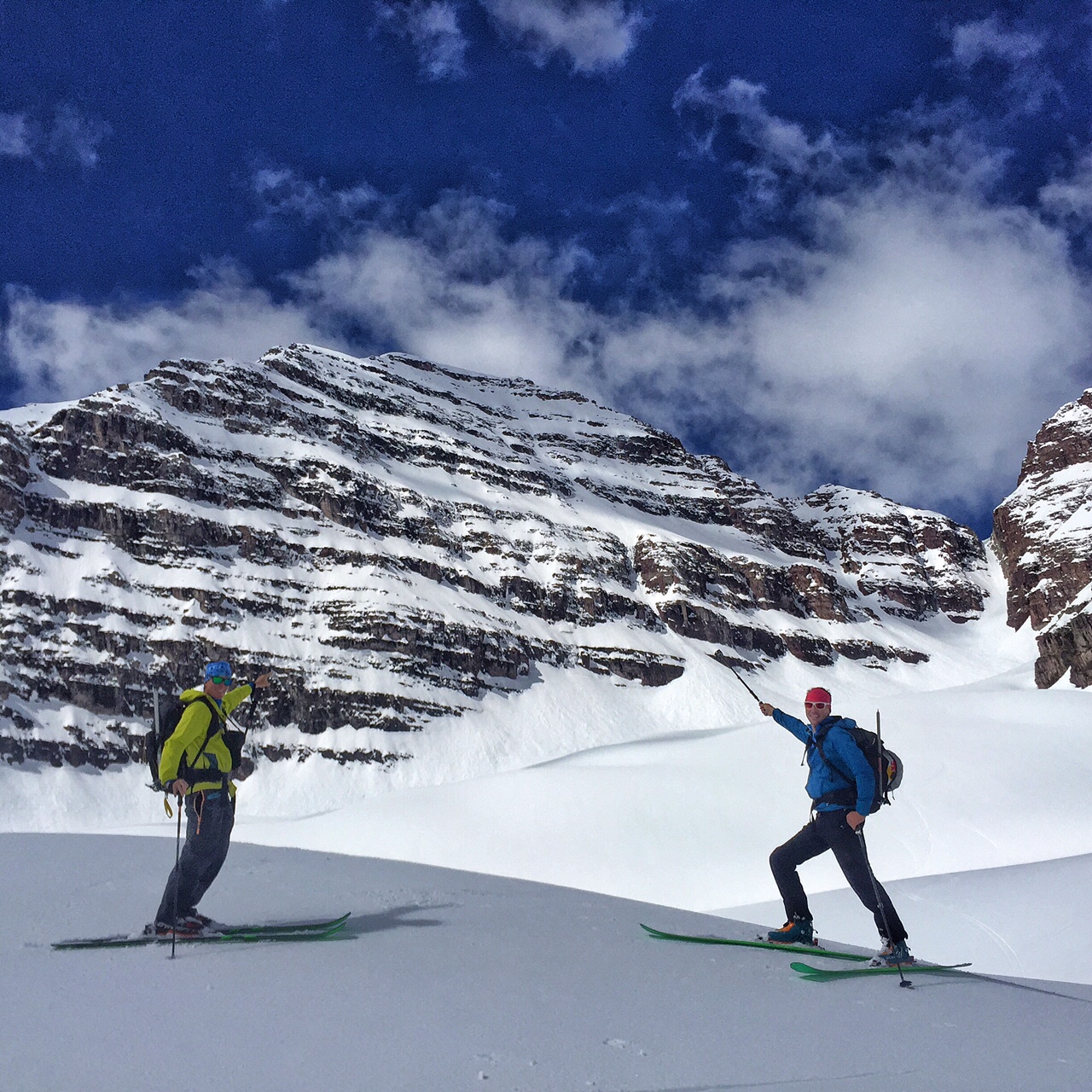 After skiing the North Face we were so pumped!

Getting back down through the woods was pretty easy with good snow coverage and before we knew it we were transitioning and walking back past Maroon lake and into the parking lot for the post climb celebration! Up the peak in about four and down in about 90 minutes after a good half an hour on the summit, its pretty hard to get any more efficient on that peak, and it was a blast.

The day was the equivalent of getting to play horse with Lebron James and Michael Jordan; Chris and Ted are a couple of the world’s best ski- mountaineers.  Nevertheless, felt great to ring in the bells of North Maroon with them, and I am so thankful for the opportunity to reach 43 peaks skied so far. The day will certainly propel me into more peaks coming up as Prime time Skiing continues.