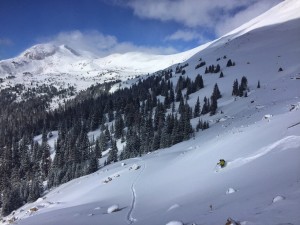 Jon making some awesome powder turns near timberline on Yale.

After a couple days of snowstorms, I headed down to Mt. Yale further south in the Sawatch. I had heard a few reports that Yale was pretty bare of snow and I had seen how the snow coverage on peaks to the east like Sherman, Quandary and the Front Range have been scoured from strong winds all winter long so far. My goal for now is to get as many peaks done as I can between now and April. I will ski peaks that have enough snow, and choose as many classic lines as possible. Patience will be a virtue, but my hope is that I can get enough peaks done in the next three months to put me in the position to finish the peaks when we get enough snow that historically sticks to some of the barren peaks in April in May. 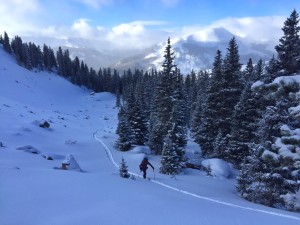 Not knowing what to expect on Saturday, a starry departure with early morning alpenglow at temperatures around zero is what greeted me as I headed up the Denny Creek Trail for Yale.   Winds stayed light all morning, and once again a snowshoe packed trail helped make the ascent to timberline relatively quick and easy. Getting above the timber I broke trail and the views became impressive.

As the sun rose higher and I gained the tundra, the winds stayed reasonably low – probably 20 mph. The sun helped keep the hands and feet warm, and the fresh powder covered the usually barren ridge. If I could summit and come down before any winds picked up significantly throughout the day, then the snow would hold its place, and I’d be rewarded with some excellent powder turns! 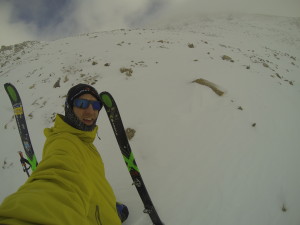 Just enough snow coverage as we ascended to 14,000′ near the ridgeline.

The final 500 feet of the southwest face got difficult in post holing powder and the final 200’ on the ridge for several hundred yards proved to be pretty tough, but before long I was strolling in ankle deep powder and arriving to the summit. 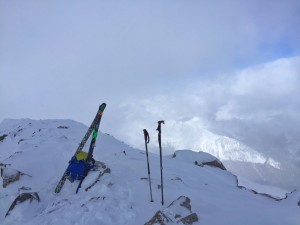 Summit of Yale looking north towards Columbia and Harvard barely poking out of the clouds.

Winds weren’t too terrible, just frigid to -20 wind chill and sometimes the surrounding peaks were shrouded in snowy blizzard clouds. As I began my descent, the clouds started to break but the winds picked up a bit. There was a small tower on the ridge I had to actually skip around on my skis, but I managed to make it down to the small shoulder and the start of the SW face and sloped. 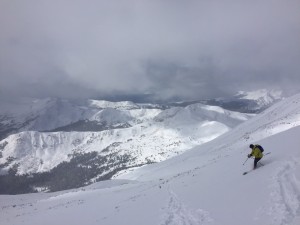 From here is it was all powder. I only hit a few rocks and as I got closer and closer to the treeline, the snow was awesome and the winds died down. Once in the trees it became a tedious process to ski the narrow trail, but the sun was out and I was happy that I had Yale in the bag.

The bottom 2 miles of the trail were very fast and before long I skied right into the parking lot and was happy to have made it down safe and sound. Two down and many more to ski!

Special thanks to Anna Marie Migl for skinning up the peak and shooting some of these photos of me skiing!