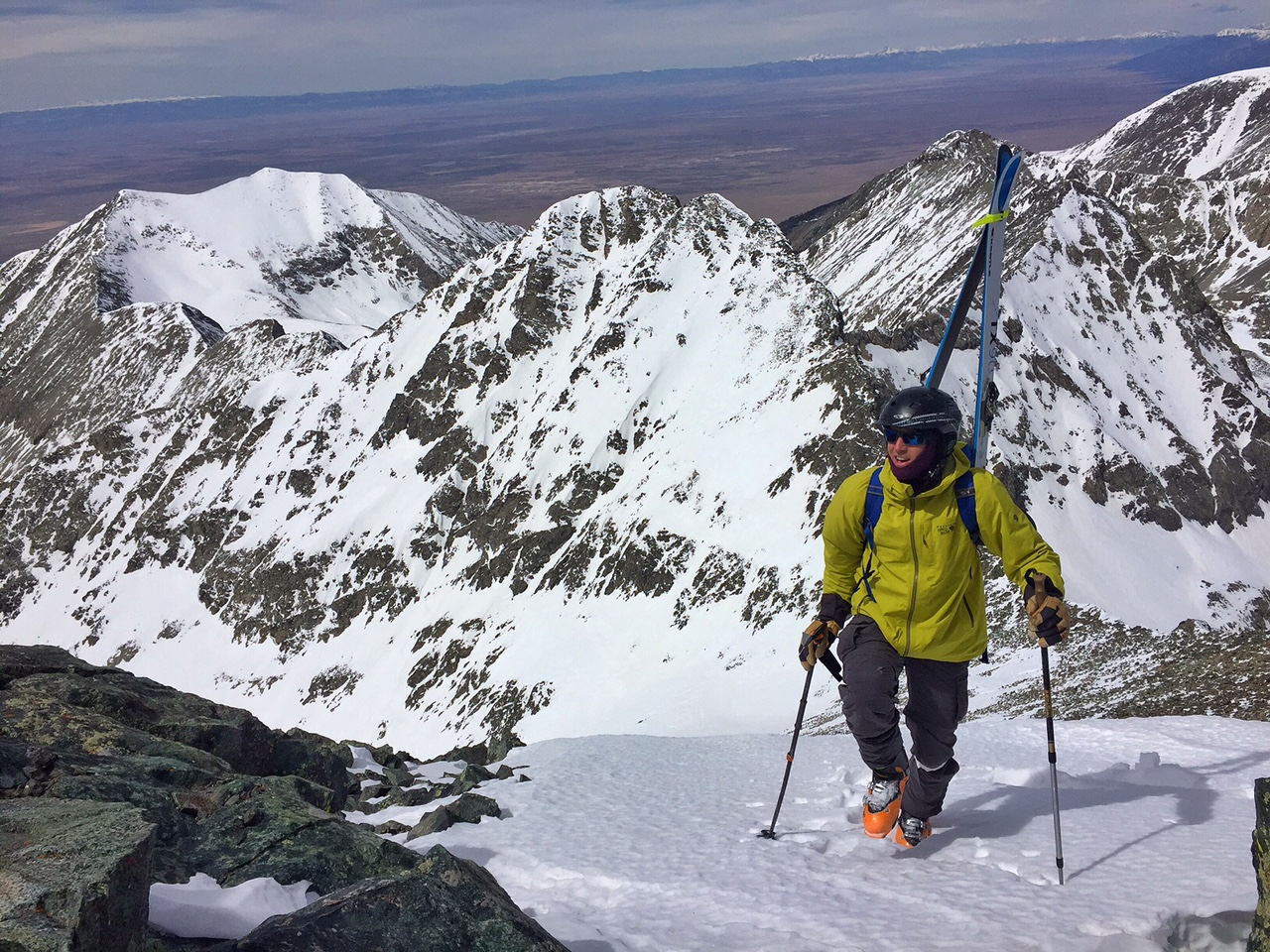 Roundtrip Mileage and Vertical: 18mi / 6800′ (Includes Ellingwood and Blanca all in the same day)

After descending Ellingwood safely, I took a short break in the bowl to transition. After a PB & J and some water, I put my skis on my back and started climbing up Blanca. It was pushing 1230 by the time I got going but the weather was warm in the sun, and the 20-30mph winds weren’t terrible. 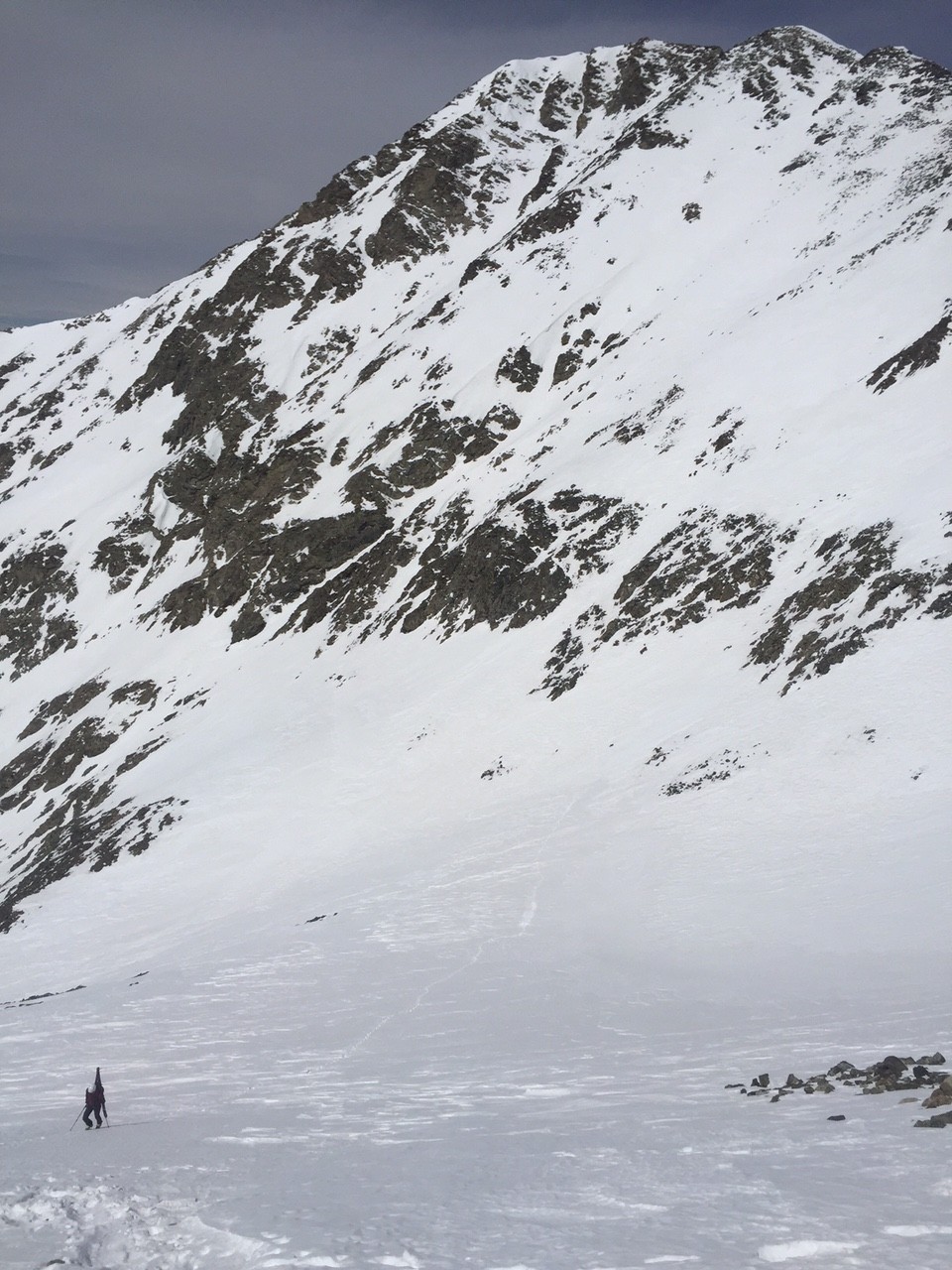 Heading up Blanca, looking back across to the line I skied on Ellingwood’s south face.

We didn’t have far to go, and for me, climbing summits and getting to the top might be the halfway point, but really once I can click in to my skis, I know that it’s time to go home by skiing, and so the pressure is off, and the fun begins!

The fun part about Blanca is being able to skirt right along the northeast ridge and you get to peer down the dramatic east face of the peak, which is a full vertical mile above the Huerfano River Valley. 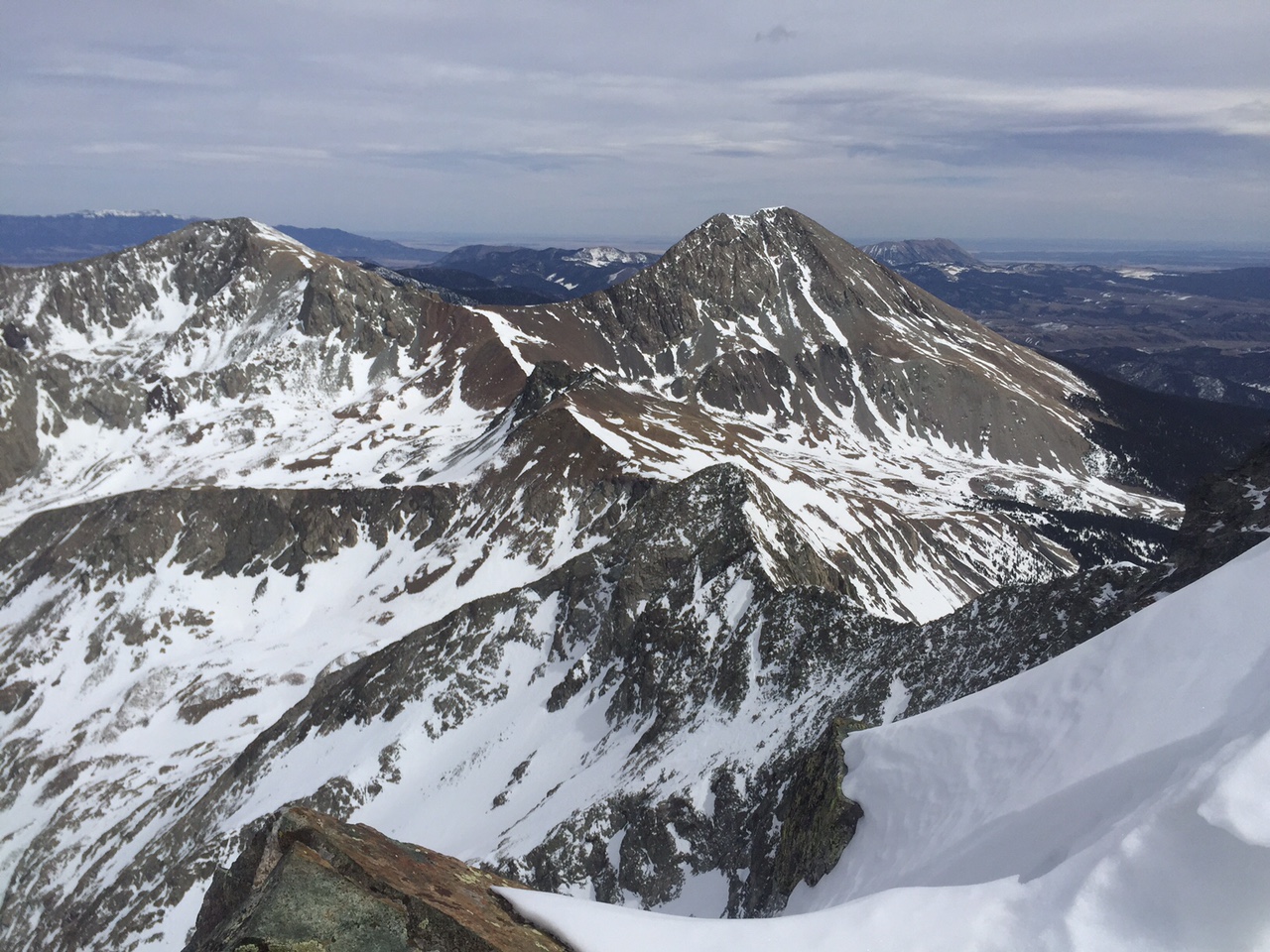 To the east I caught a glimpse of Mt. Lindsey, a peak I have to ski still, but it was pretty devoid of snow…..we need some more spring storms!

We were on the summit just a bit after 1pm, and took a nice break on top for almost an hour to eat, hydrate, shoot photos and take in some views. 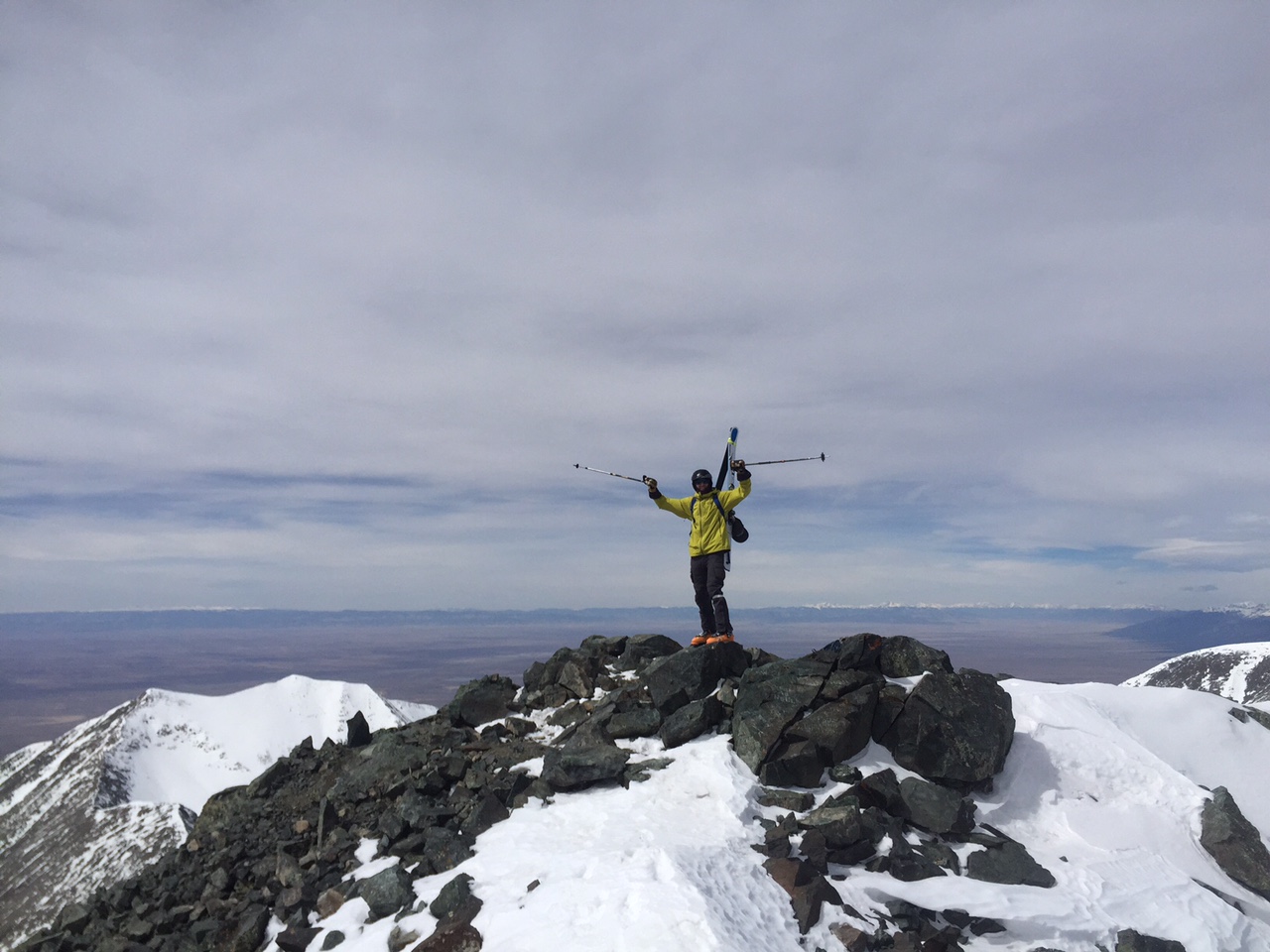 You can see from the photo above that the very top was rocky with just barely a ribbon of snow to descend. While I was able to ski off the top rock, there were sections lower down that too many rocks made Blanca unskiable. I made due and got down to snow again further below and then was able to ski all the way down to the 9000′ level on Como road.  It was fun to see the perspective of Ellingwood’s south face from across the way. Also, it was the best view I’ve had so far of the Crestones further north which are coming into condition. It wont be long now and I can continue to wrap up the other Sangre de Cristo Peaks!

Blanca is Colorado’s 4th highest peak. You have to travel all the way to the Mexican Volcanoes to the south to find a peak higher further south. 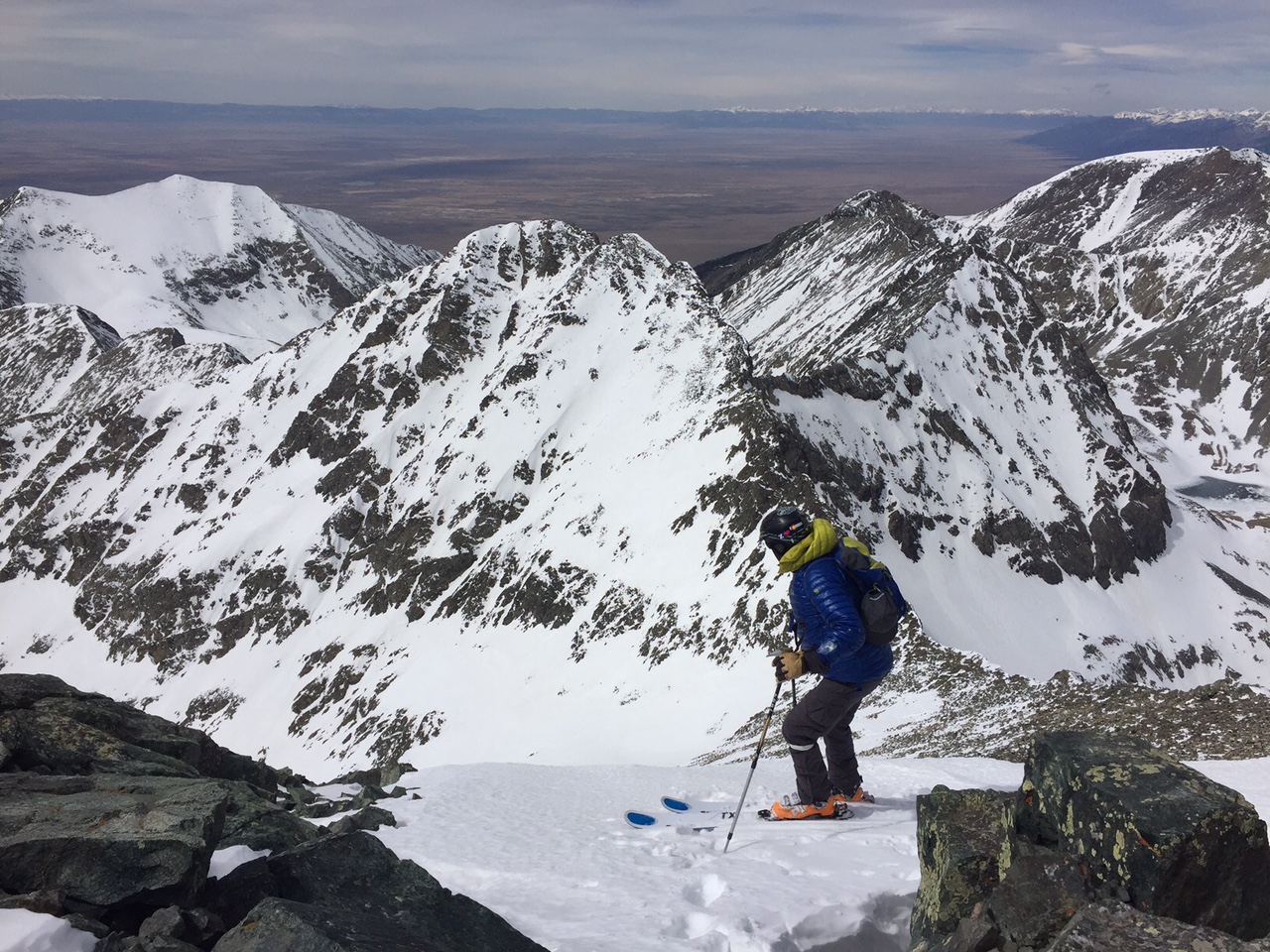 Getting ready to ski some of the bony face.

Soon I clicked in and made some side slips down the initial face and then into the basin below.  As you can see the face was horrible. oh well- a peak is a peak and you have to take what the mountain gives you. Before long we were making awesome turns back towards the bowl between the two peaks. 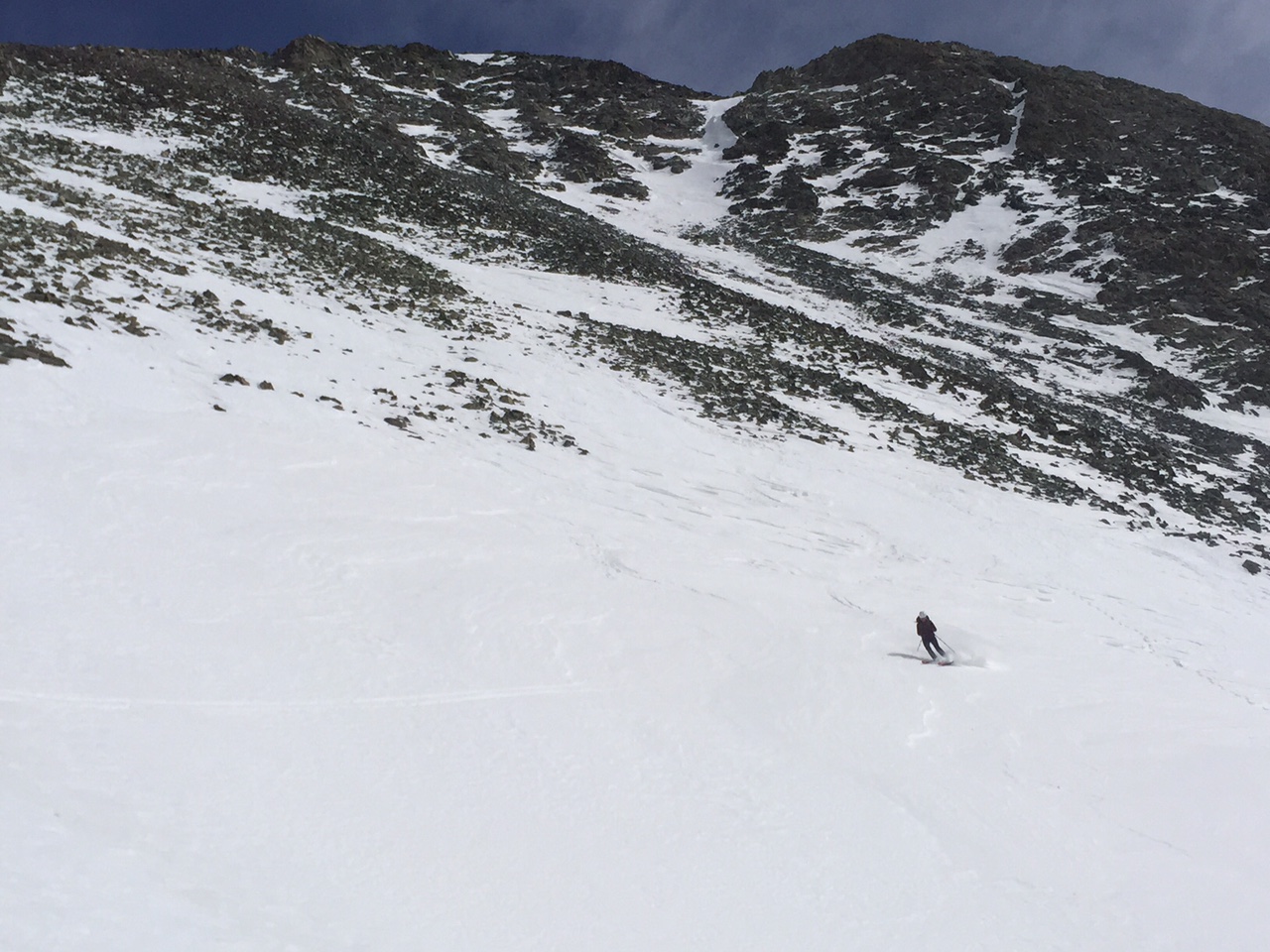 We still were able to piece together some snow down the face and of course the turns got better as we went down.

The next 30 minutes went fast, the turns in the valley were fun, and we were at Lake Como around 3pm. 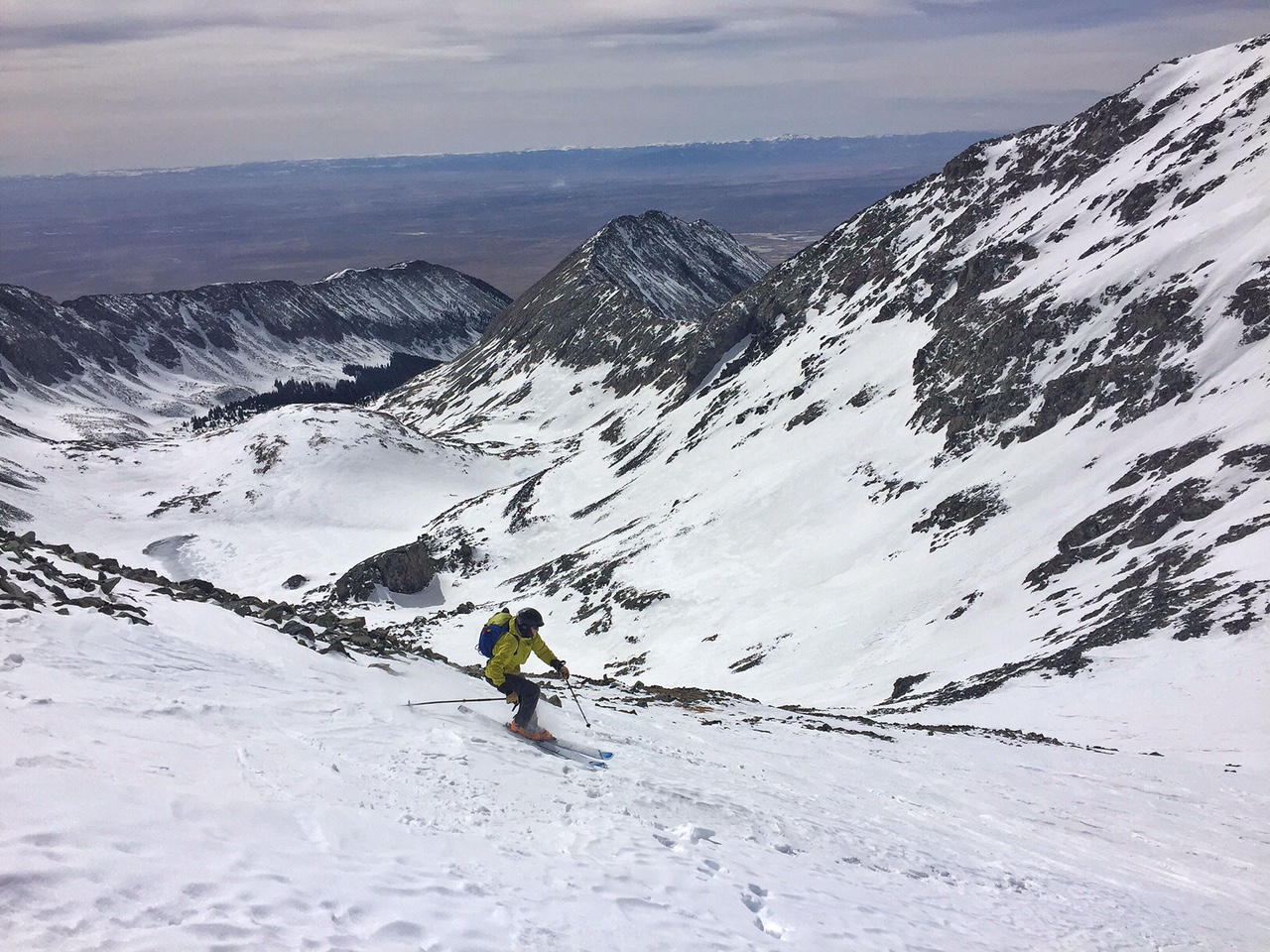 Cruising down Blanca and into the basin below. It was my third mountain skied in 3 days.

Then before  long we were making a couple of miles of turns back down the road, a transition to our hiking shoes and finally back to the car by a bit after 5pm.

12 hour days can be tough, but time goes fast when you have accomplished your goal, have great weather and great friends to share it all with. Best of all, I don’t have to venture up the Como Road towards these peaks again at least until there is better snow! 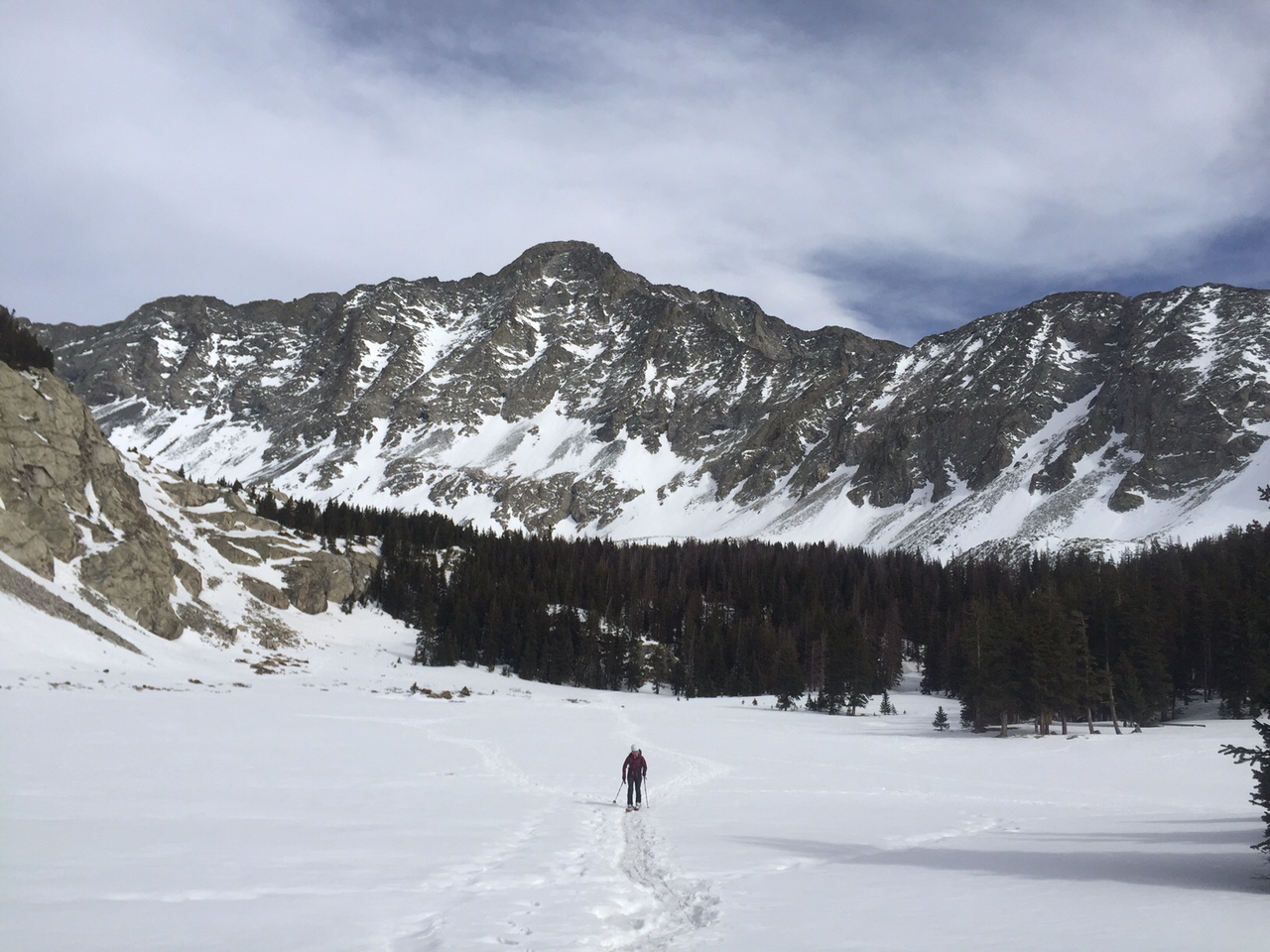 On to the rest of the project! Thanks for following along!