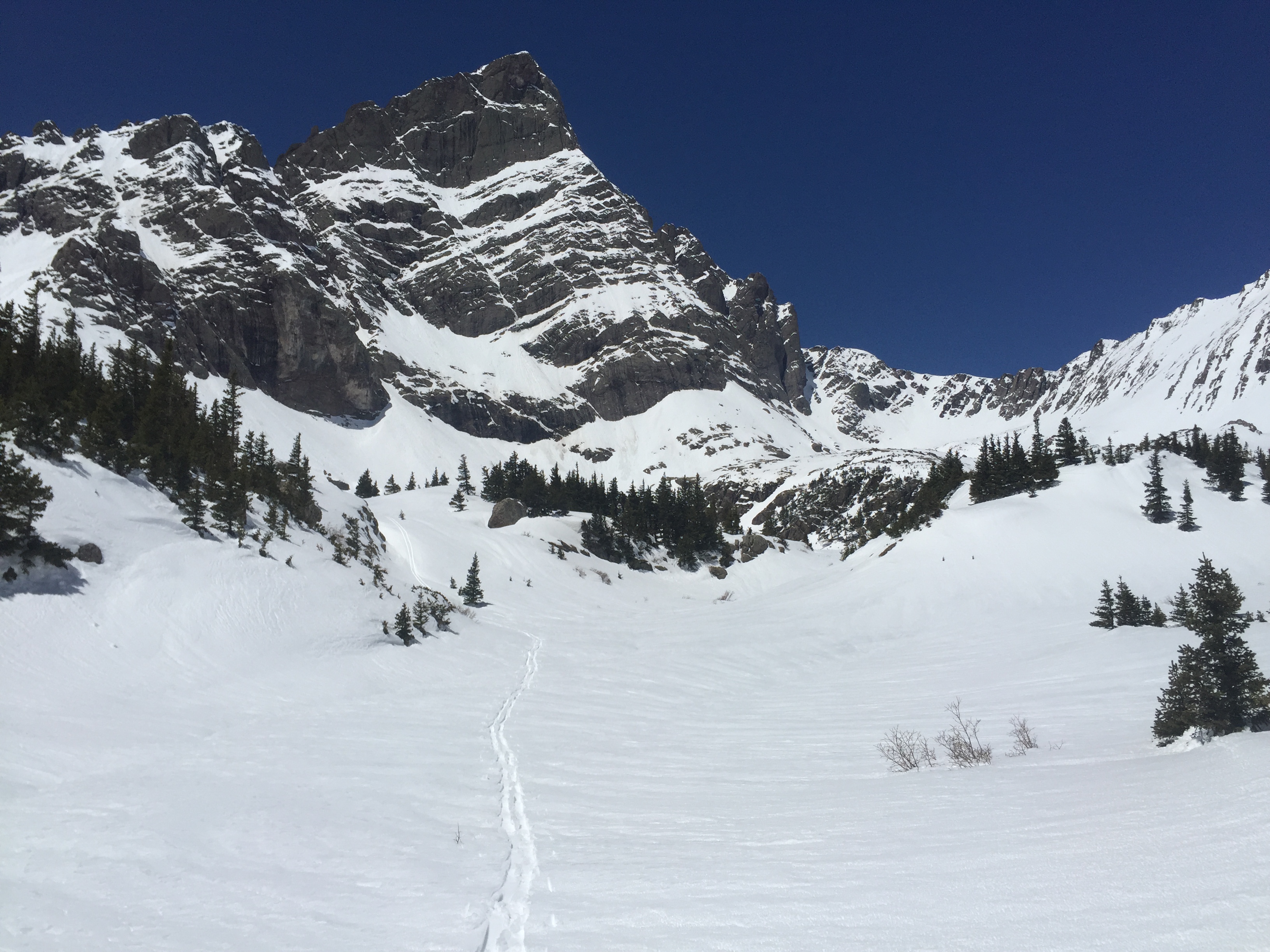 The Needle after skiing it.

May 5 Start Time: Wilderness Boundary 130am

Down to Bottom of Crestone Peak to Scout the Line: 945am

Broken Hand Saddle to Return 11am

May 6 Start Time: Wilderness Boundary 2am

Skied down to base of Crestone Peak past Cottonwood Lake to transition: 7am

Skied back down, climb to Broken Hand Saddle By 1045 or so, short break on Saddle.

To do both Crestone Needle and Crestone Peak on consecutive days was special. I took advantage of amazing early May weather and put together a back to back for Cinco de Mayo and the 6th as well. 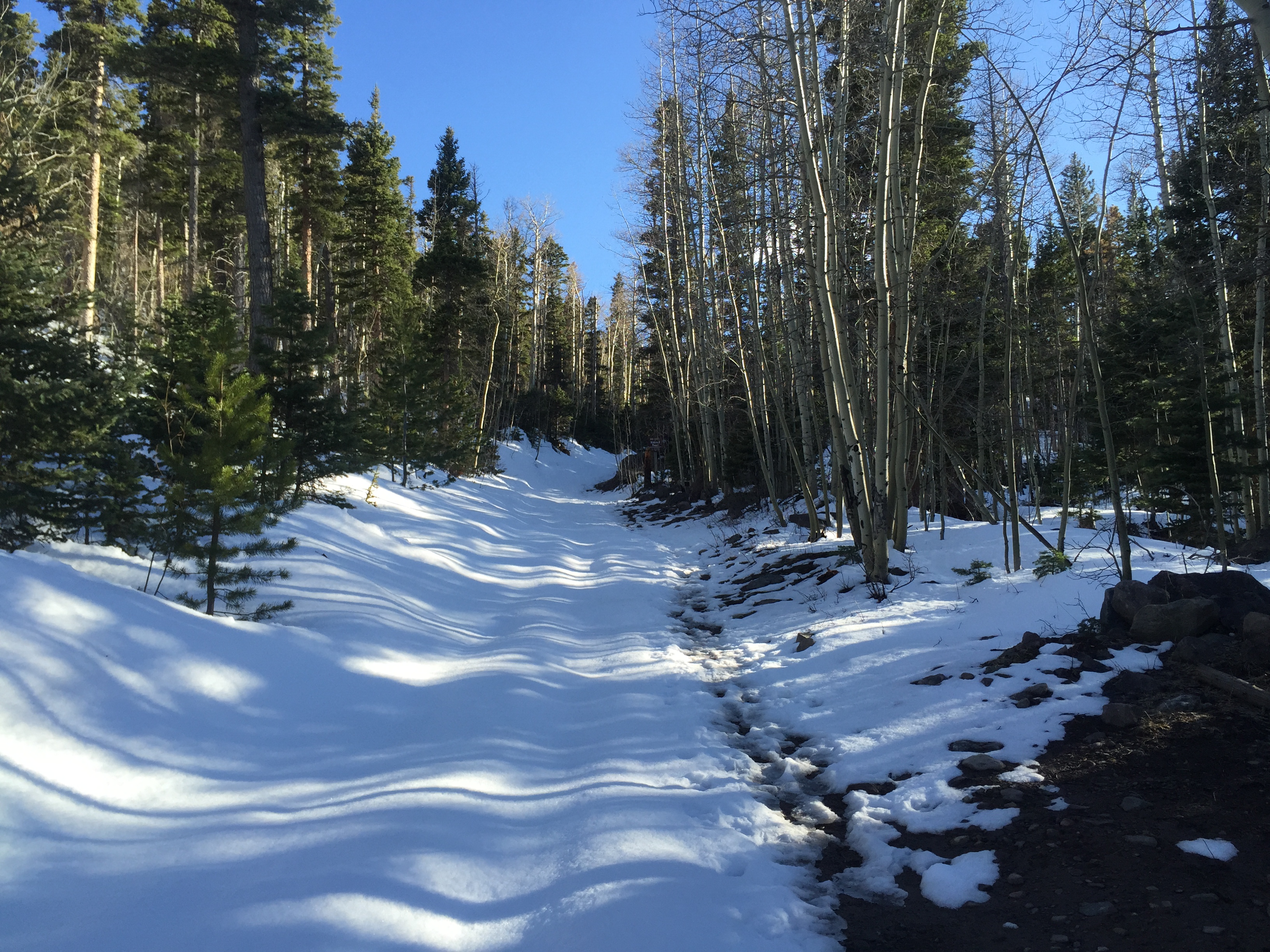 South Colony road at the Wilderness Boundary the day before climbing both peaks on the 5th and 6th.

My thought process was simple: be ready to change and adapt, but take advantage of putting in your own work to make life easier on the second peak.   Specifically meaning: I originally planned on knocking out Needle and Peak on the same day. However, because it is May and because the days are getting warm very quickly, as I left my vehicle at the Wilderness boundary below South Colony at 130am on May 5th, I assumed I probably had a 50-50 shot of getting both peaks on the same day. Warming might put a wrench in my plans to get both done, I will explain all of this as I get to the Needle and Peak.

It was a starry morning as I slogged up into South Colony basin. I reached the lower South Colony Lake at 4am, and was then slowly following the summer trail corridor to traverse to below the couloir leading to the broken hand saddle. For the traverse to below the saddle and up the couloir I had to boot, and since the north facing snow was very punchy, it was time consuming. Breaking your own trail solo is one of the hardest things a mountaineer will have to do, a stark reminder at times to make sure I continue to recruit and link up at times with great partners (which happened on Kit Carson on May 10th.) 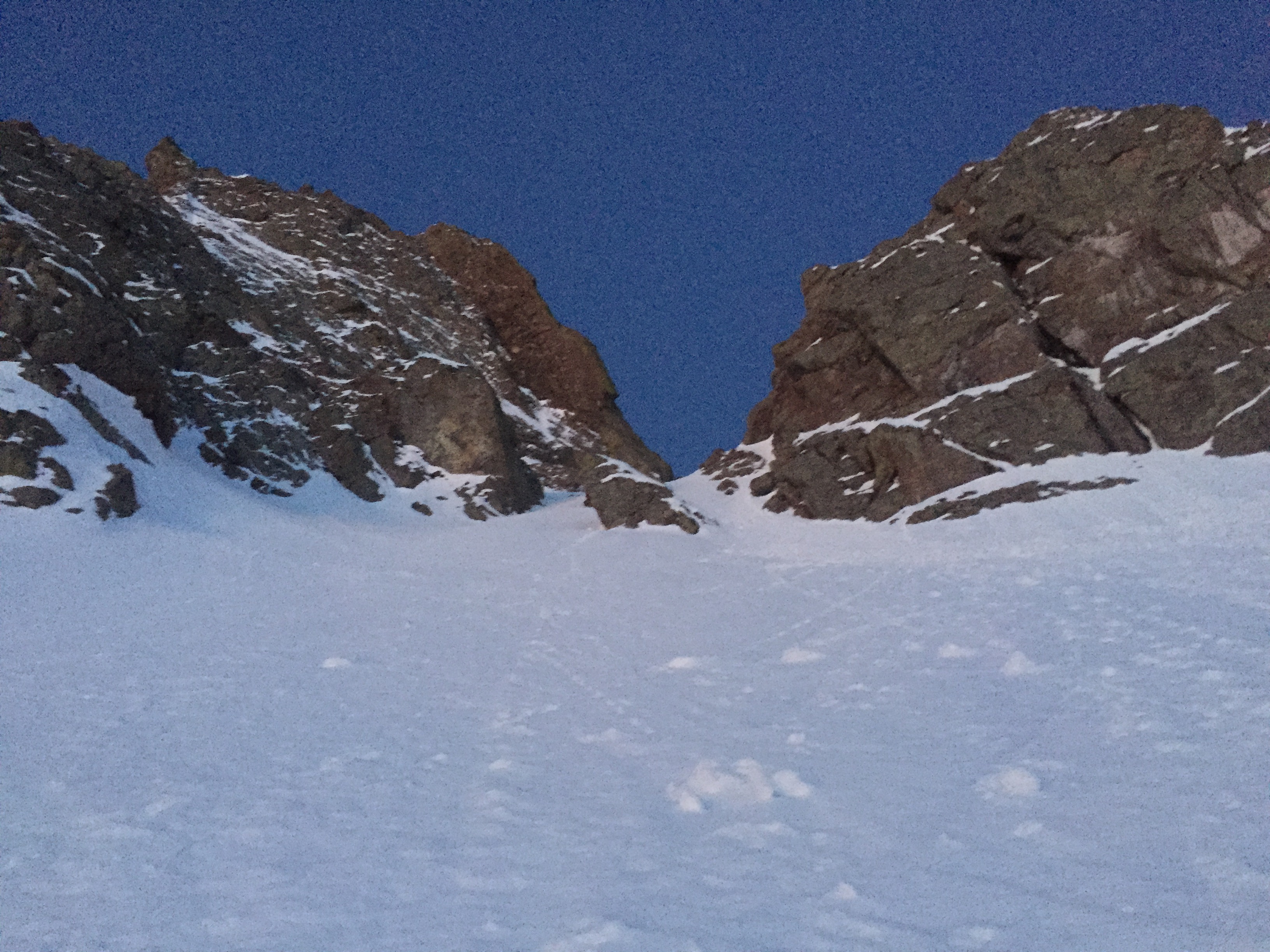 It took from 4-6am to go from South Colony lake to the Broken hand saddle: something I have done several times in 45 minutes in the summer months. By contrast, which I will get into details some, because I was able to use my same booter tracks the very next morning, I went from Lower South Colony to the saddle in a mere 60 minutes on the 6th of May when I climbed Crestone Peak and skied it. 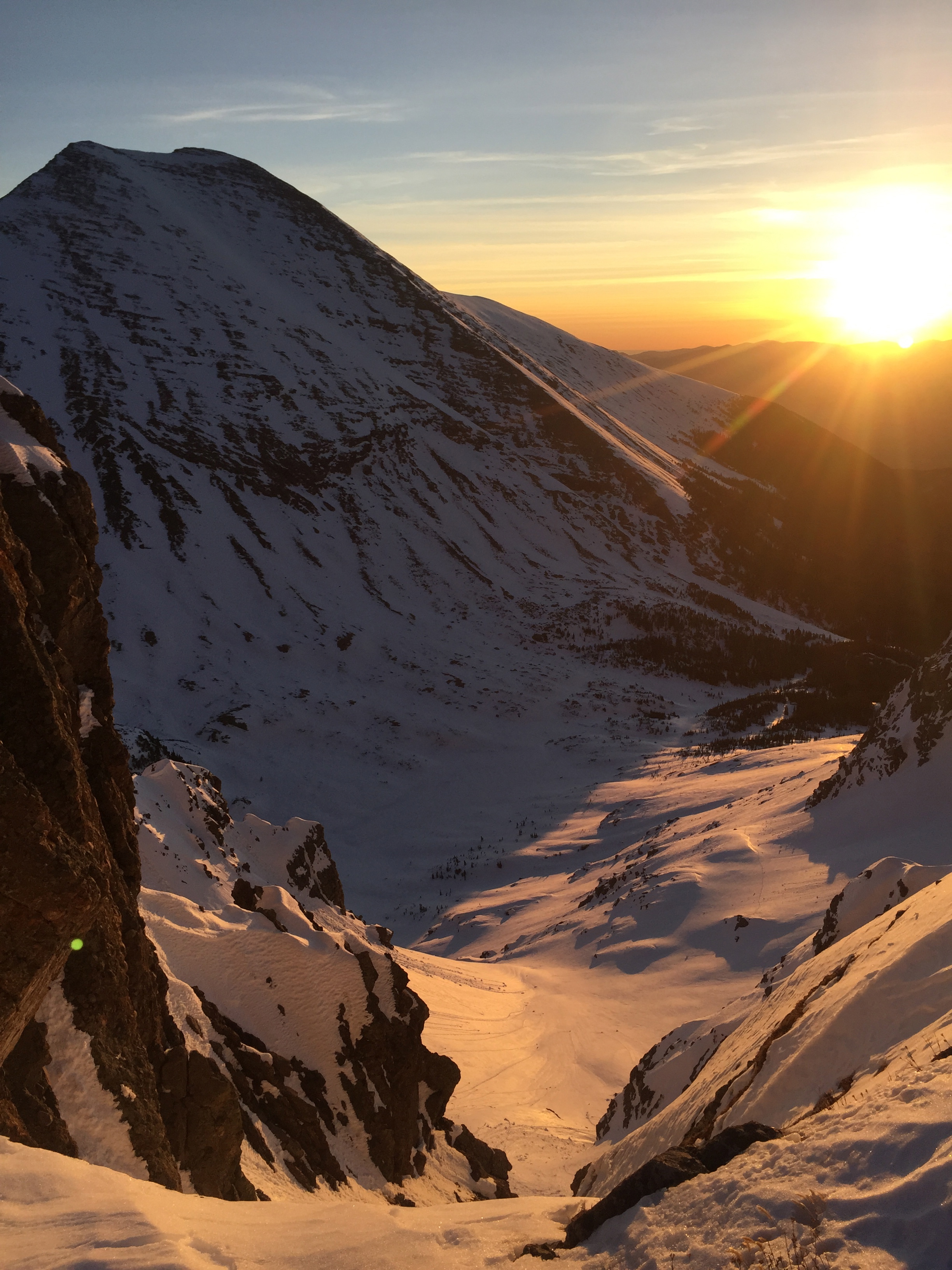 Sunrise at the saddle.

So once on the saddle, the sun had come up and I pushed up the ridge to the base of the needle and the Needle’s South couloir.

Sunrise light on the Needle.

It was in, in fact, it was as in as I have ever seen it in snow conditions over the years. The booting was solid and firm, and even the two water ice falls had snow covering the right (east) side of them as I climbed which allowed me to easily ski them in their entirety on my descent. 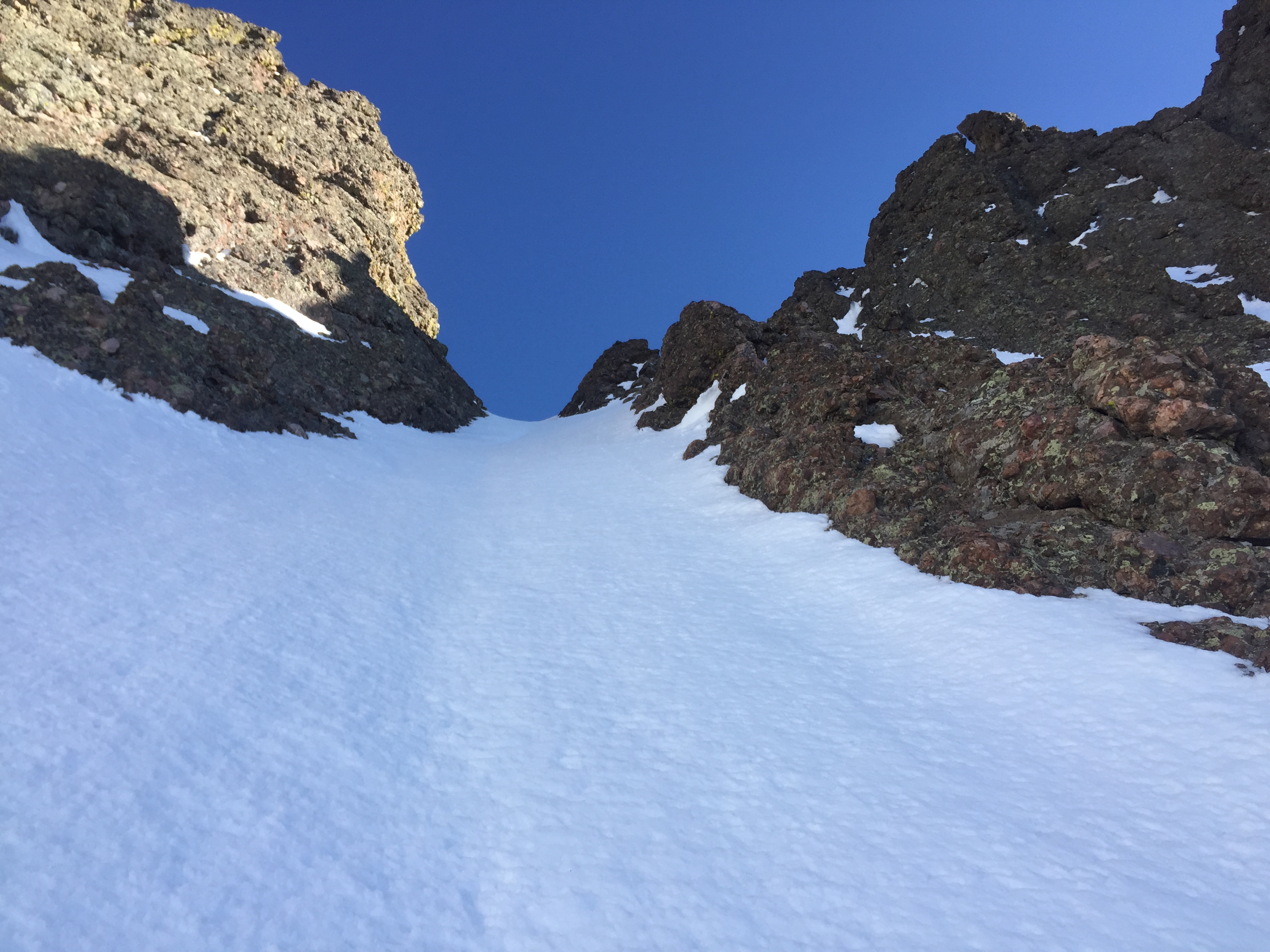 Perfect Conditions in the steepest and narrowest part of the south Couloir. 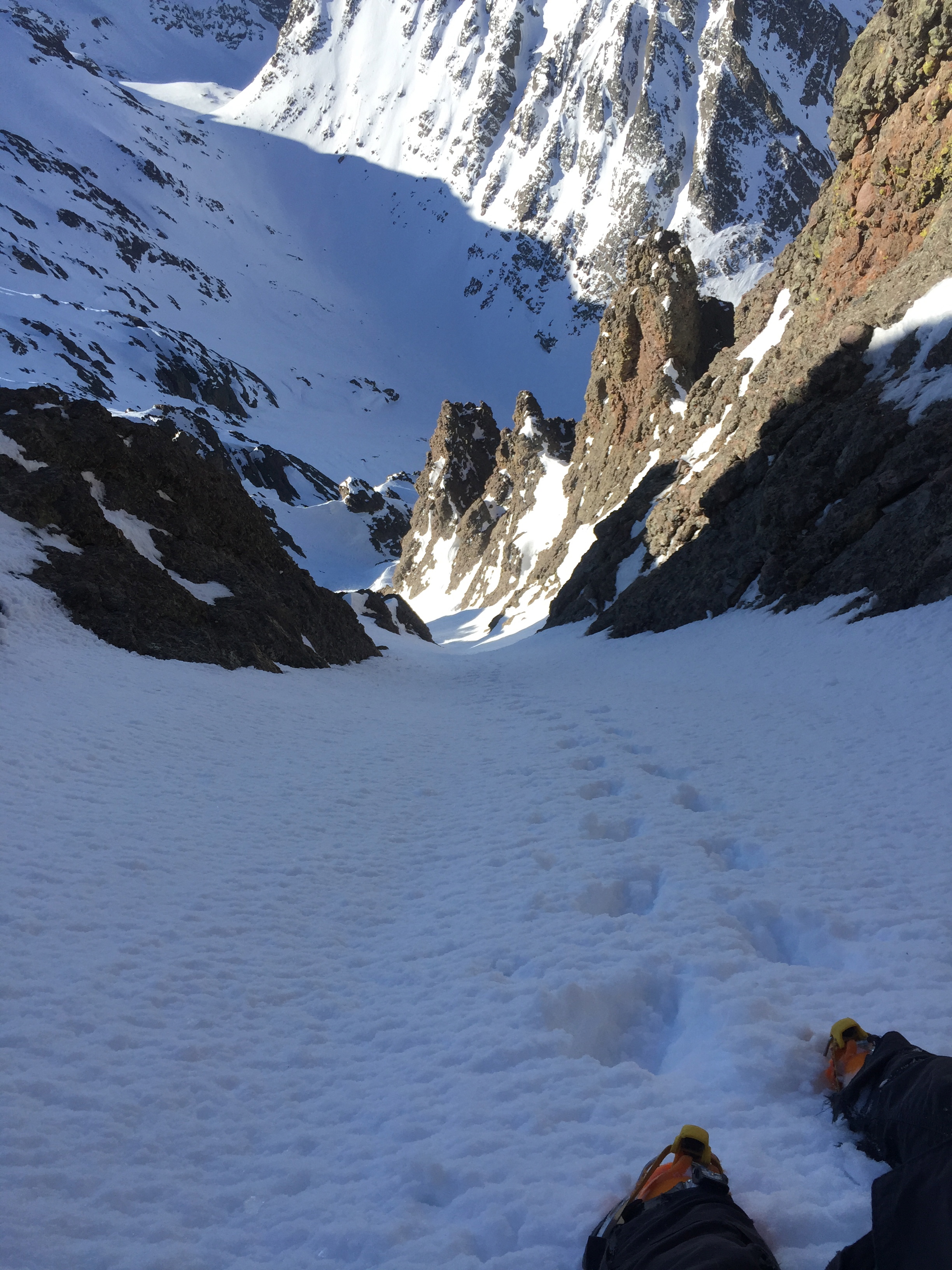 Looking down the route, looks great!

As the sun got higher, I knew the clock was ticking, but I had plenty of time. I pushed up the thinnest and steepest part of the couloir then of course it opens up near the top. 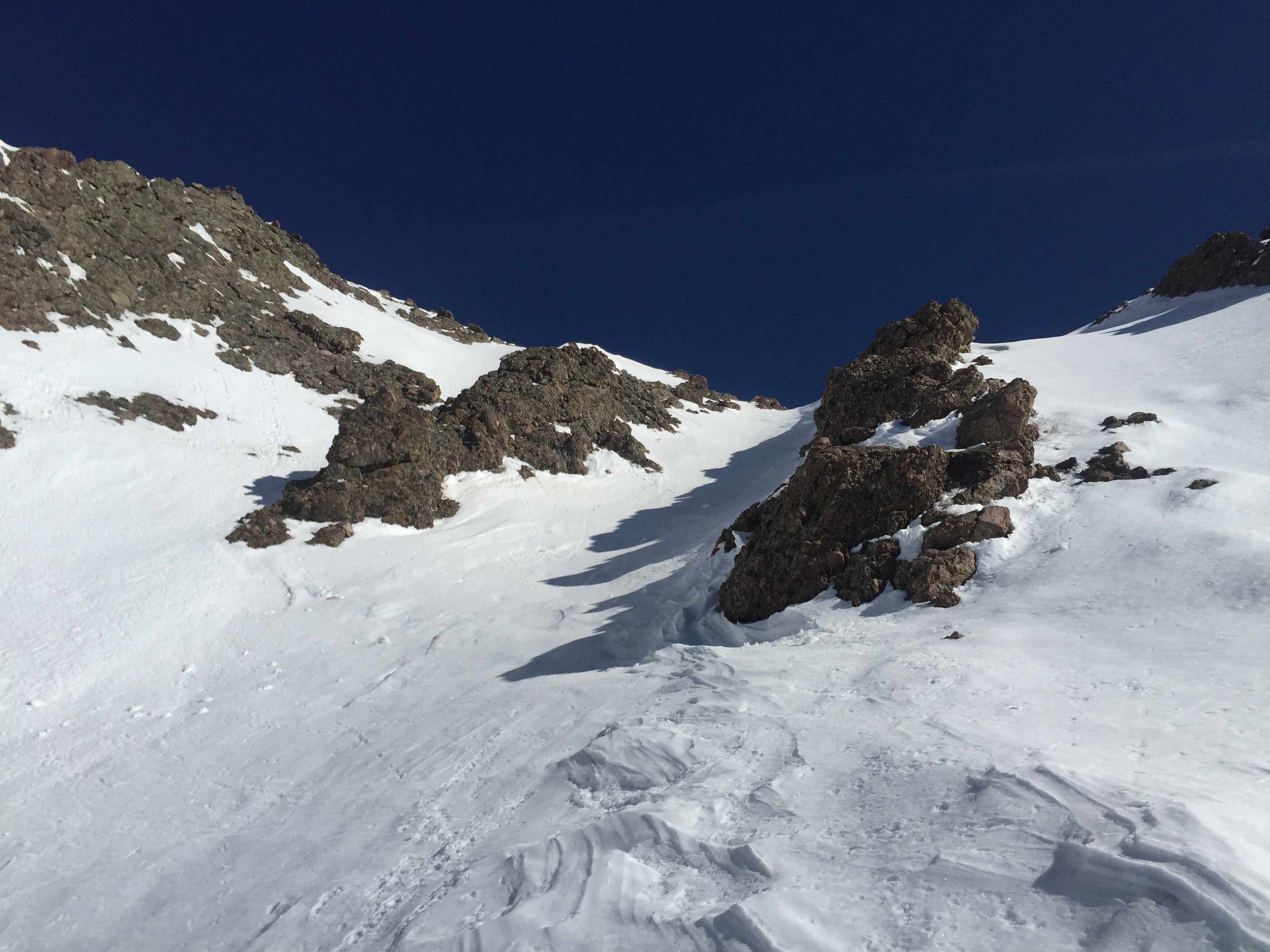 The final section to go up!

I climbed it direct and only had to follow the ridge a short distance to reach the summit. 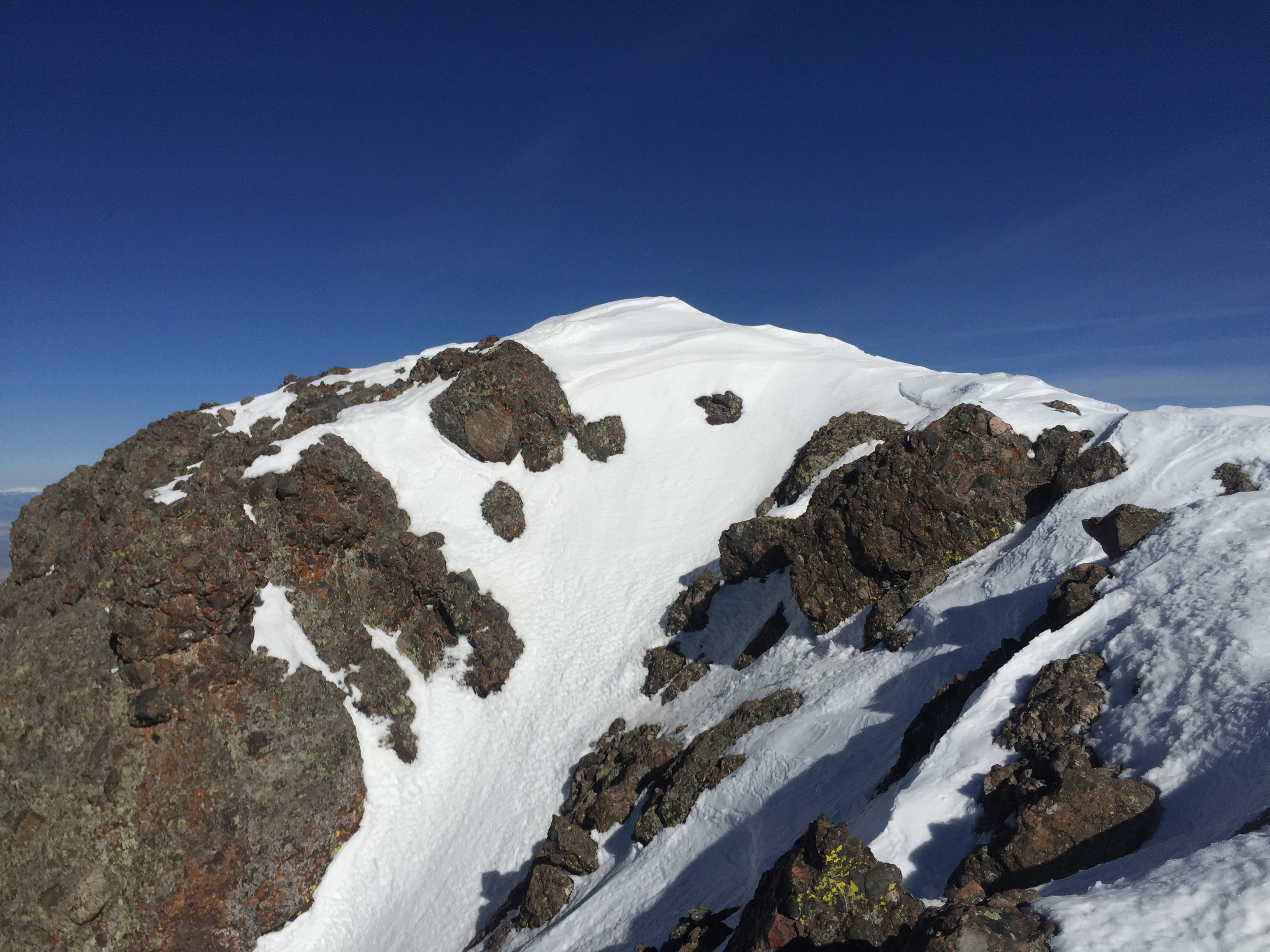 Final walk to the top. 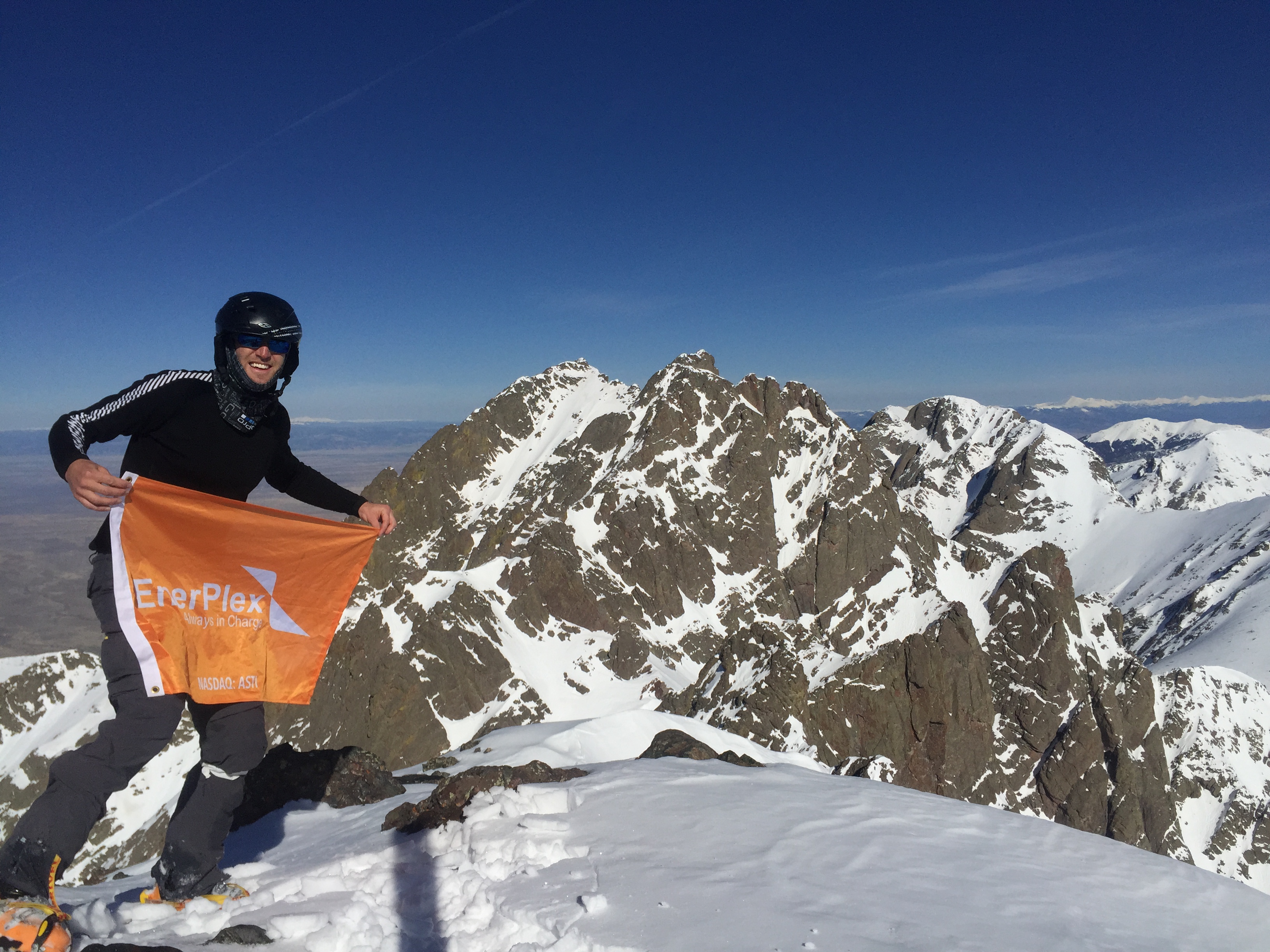 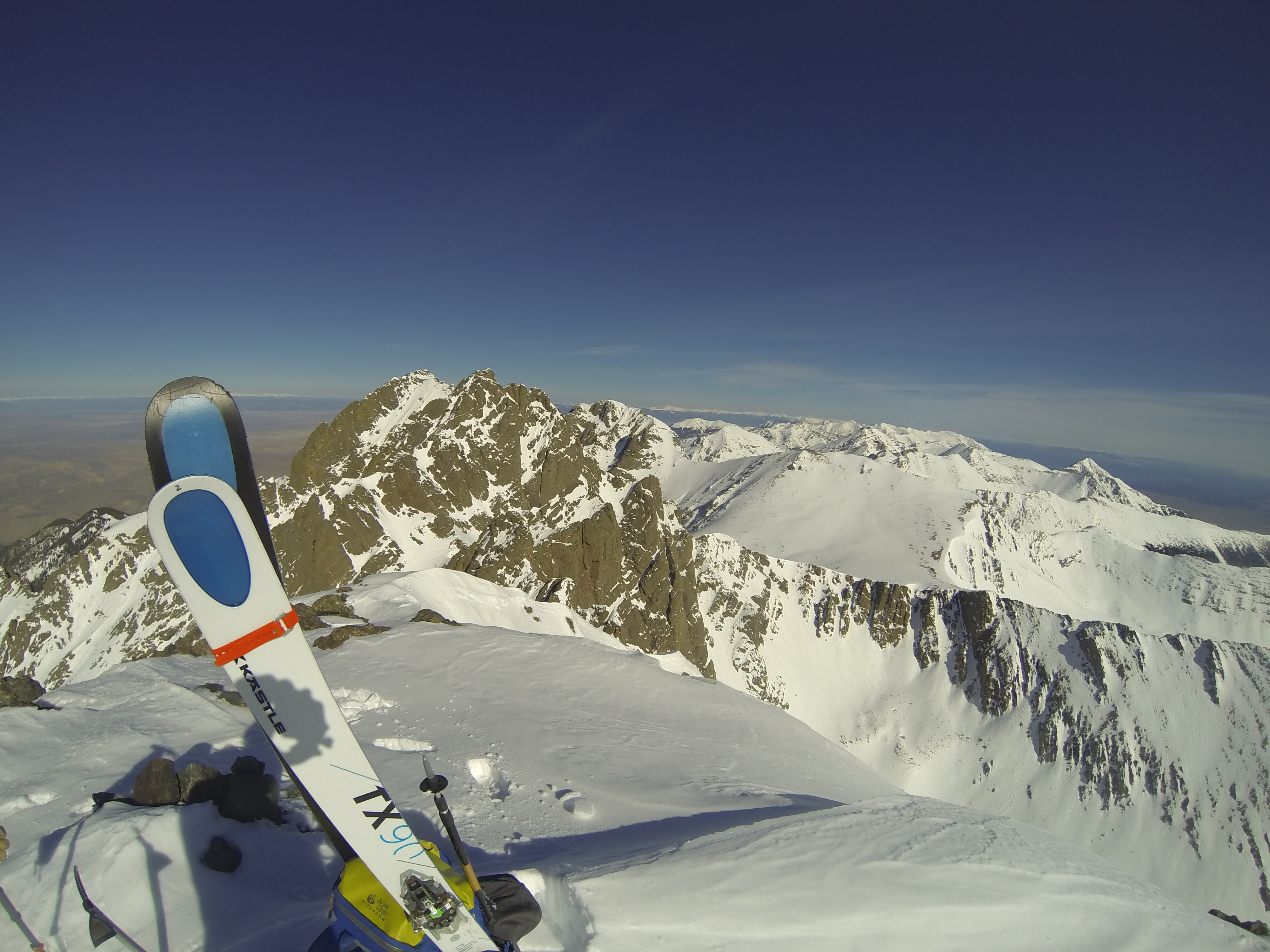 Summit of Crestone Needle – May 5, 2016. Great view over to Crestone Peak and Kit Carson, all in amazing snow and ski conditions.

Snow was abundant, firm, and ready for me to ski down. 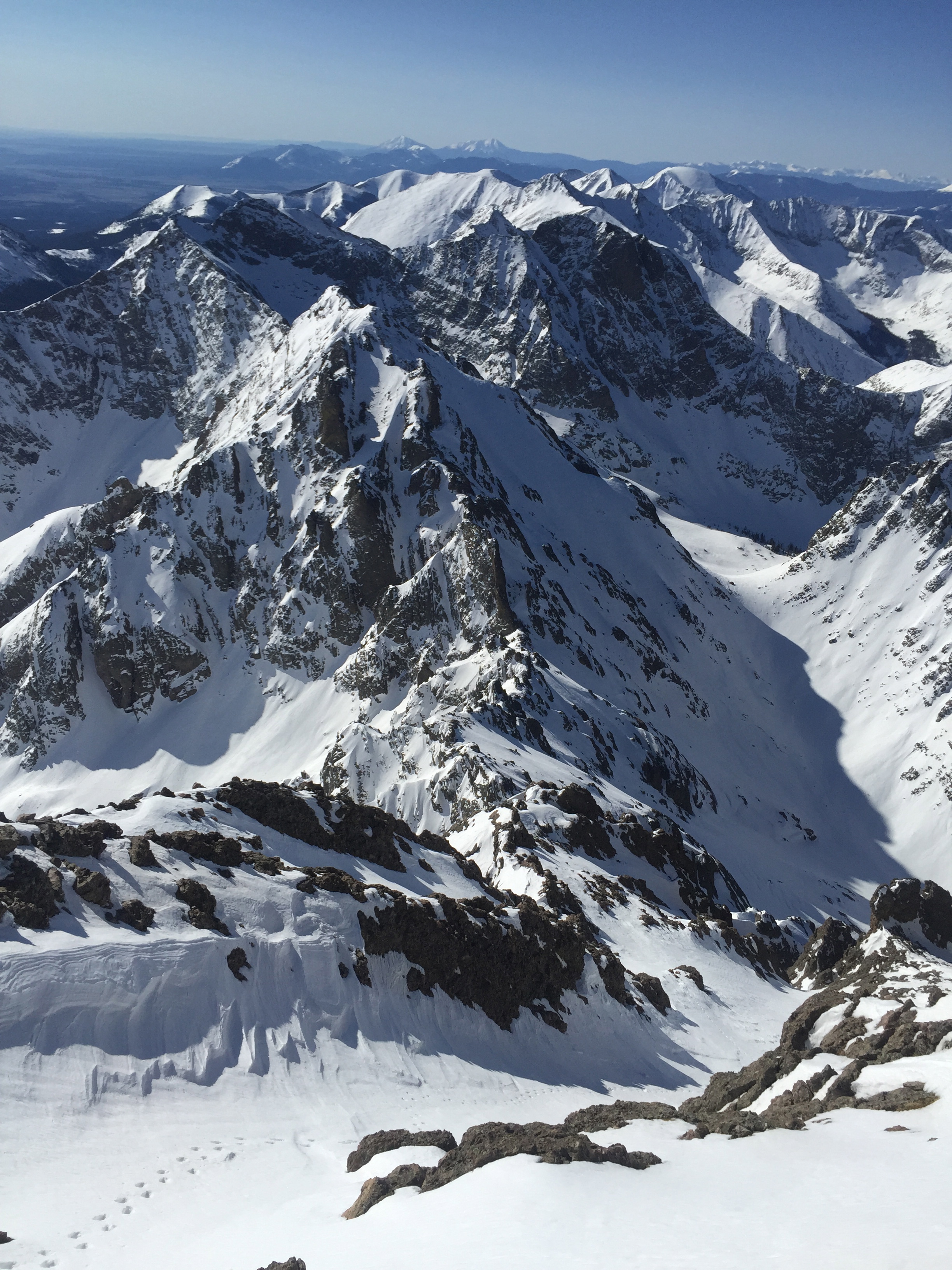 Dropping into perfect conditions for the Needle.

I carefully skied back down the ridge and to just above the point where I could traverse directly into the top of the couloir. 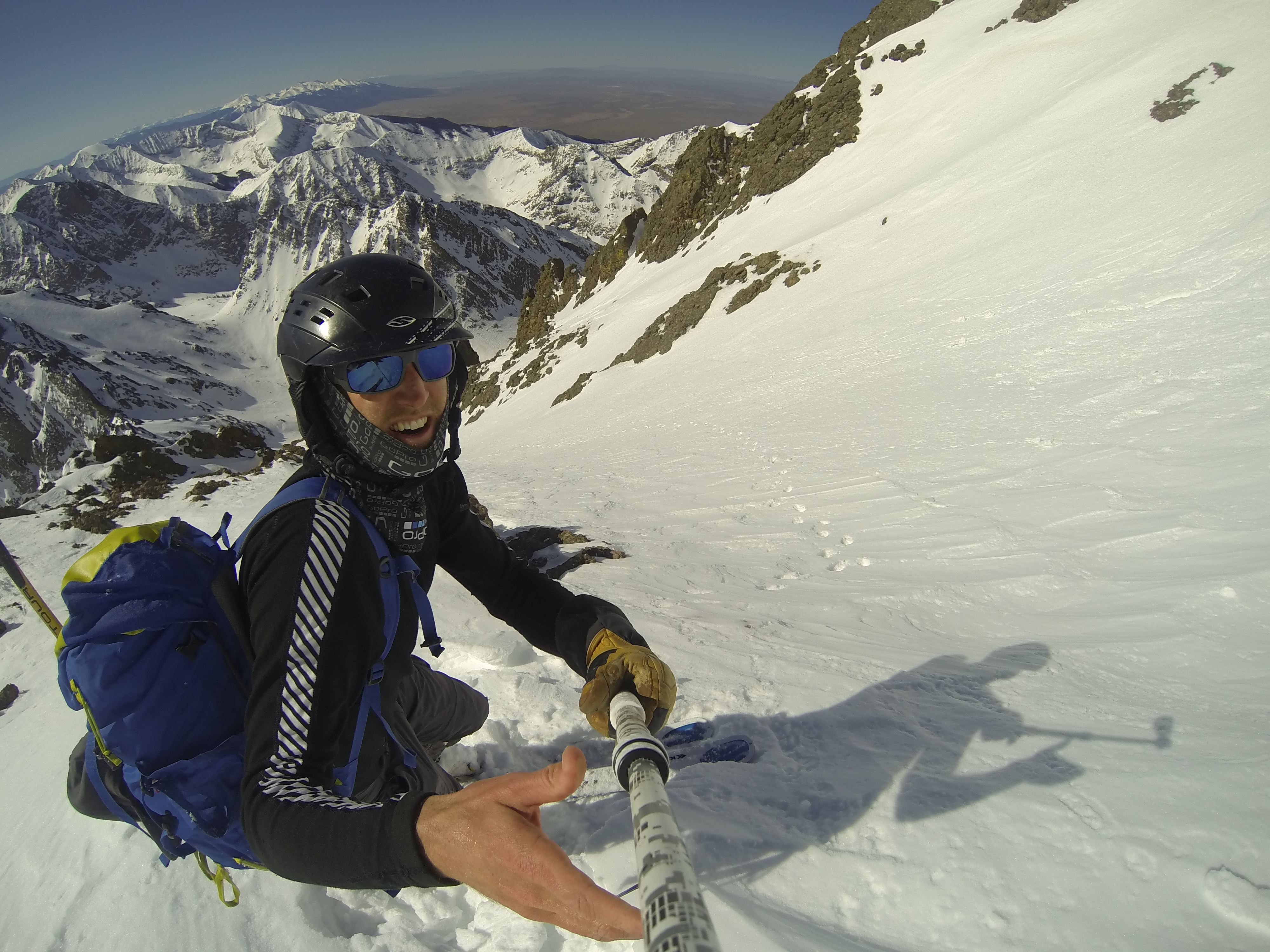 Quick break in the upper mini trough before dropping further down.

Here one turn is all that I needed. In the morning sun the mini-bowl if the upper face had plenty of room to cut some turns. 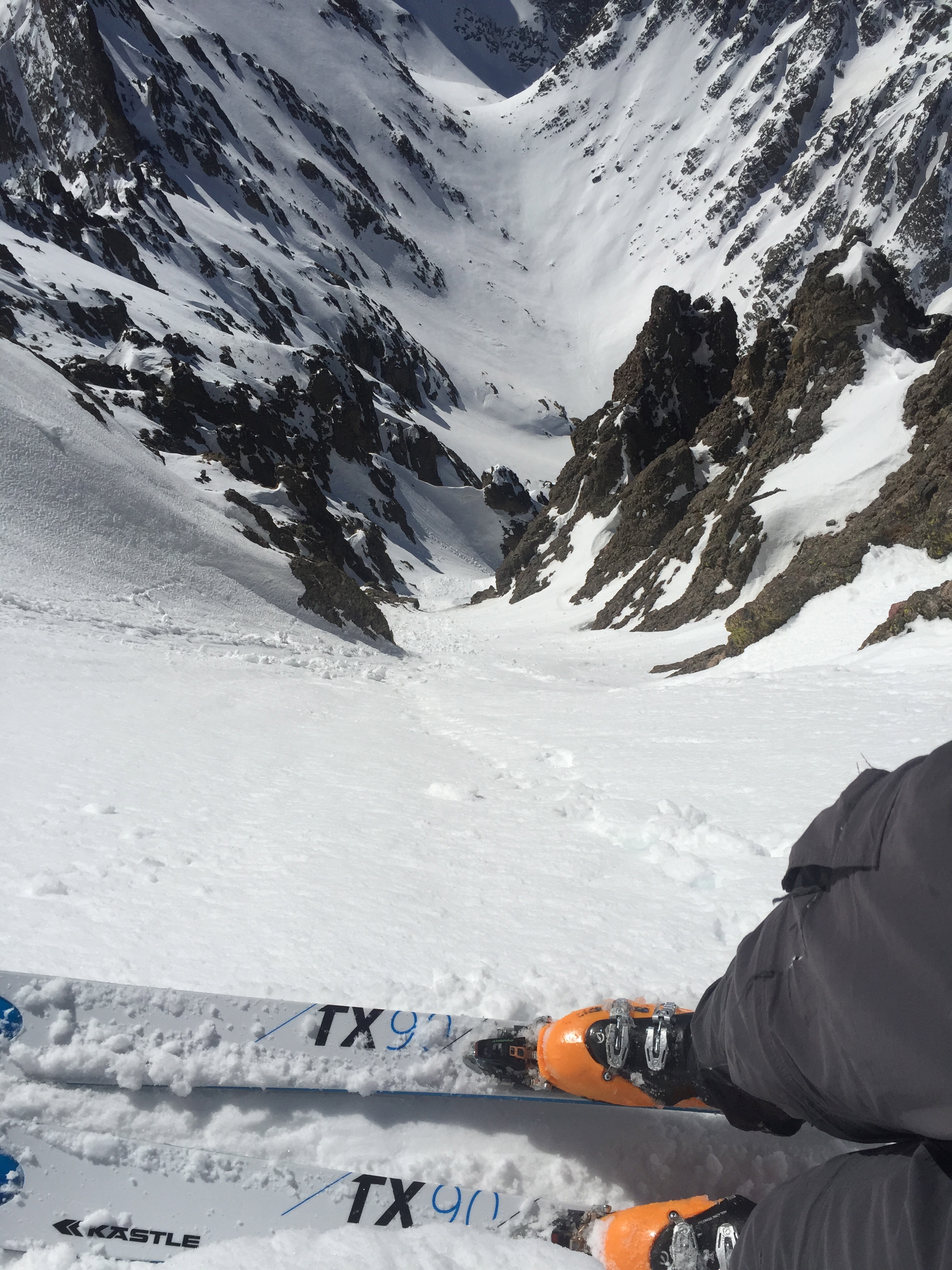 After 4 or 5 quick turns I turned my skis to the west and side slipped the narrowest portion of the couloir. 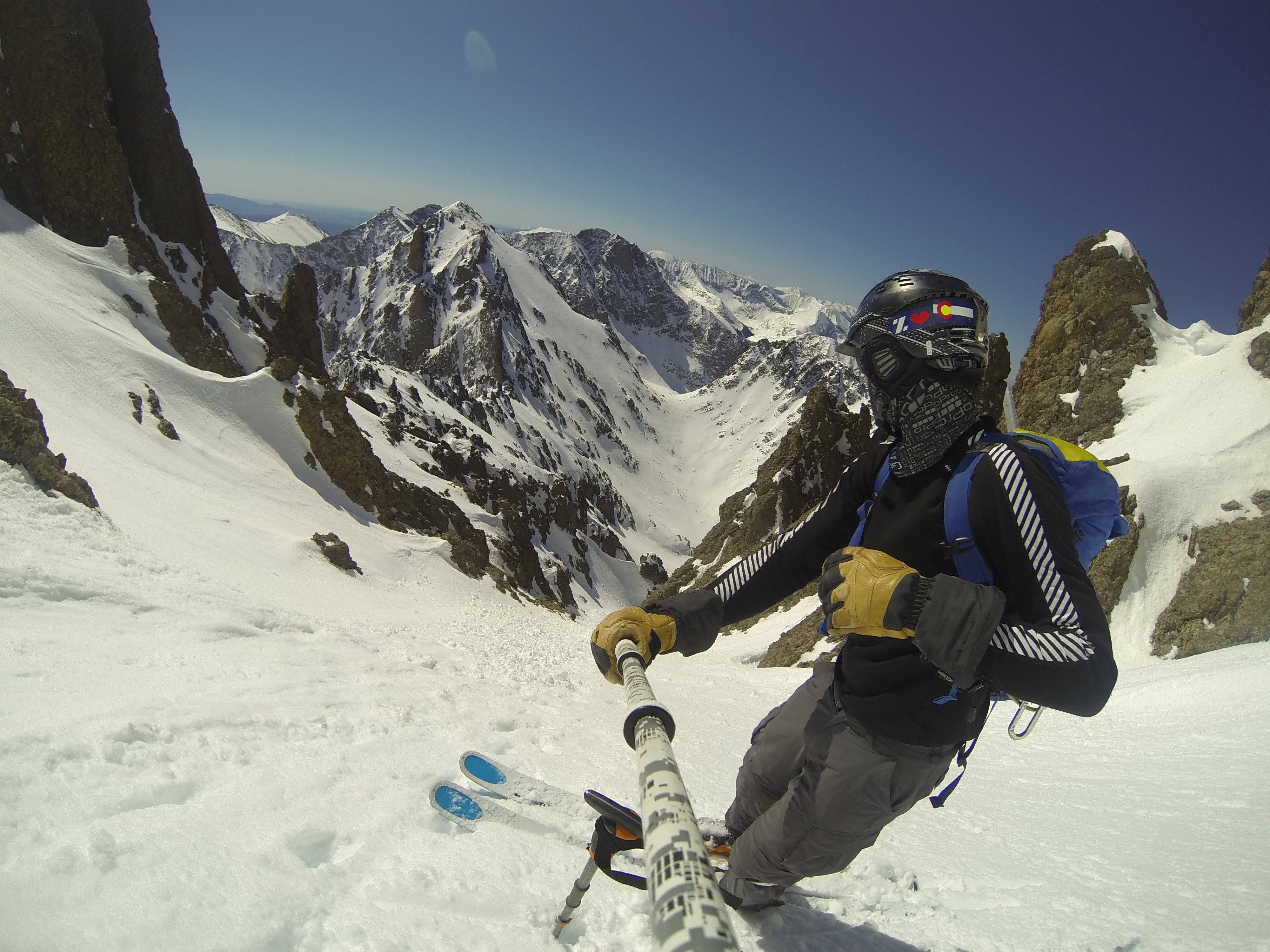 More turns below the narrows as the snow was excellent.

I had made it though the toughest part now. Turns were possible now right at about the point where the summer route decides to go around to find the more easterly couloir. I cut some careful turns down to the first waterfall of ice, and then bypassed on the east (skier’s left). Had to do this twice but the lower waterfall had excellent snow on the left again. After that the rest of the couloir was an easy ski, just a bit narrow further down, but all the way down to Cottonwood lake minutes later. 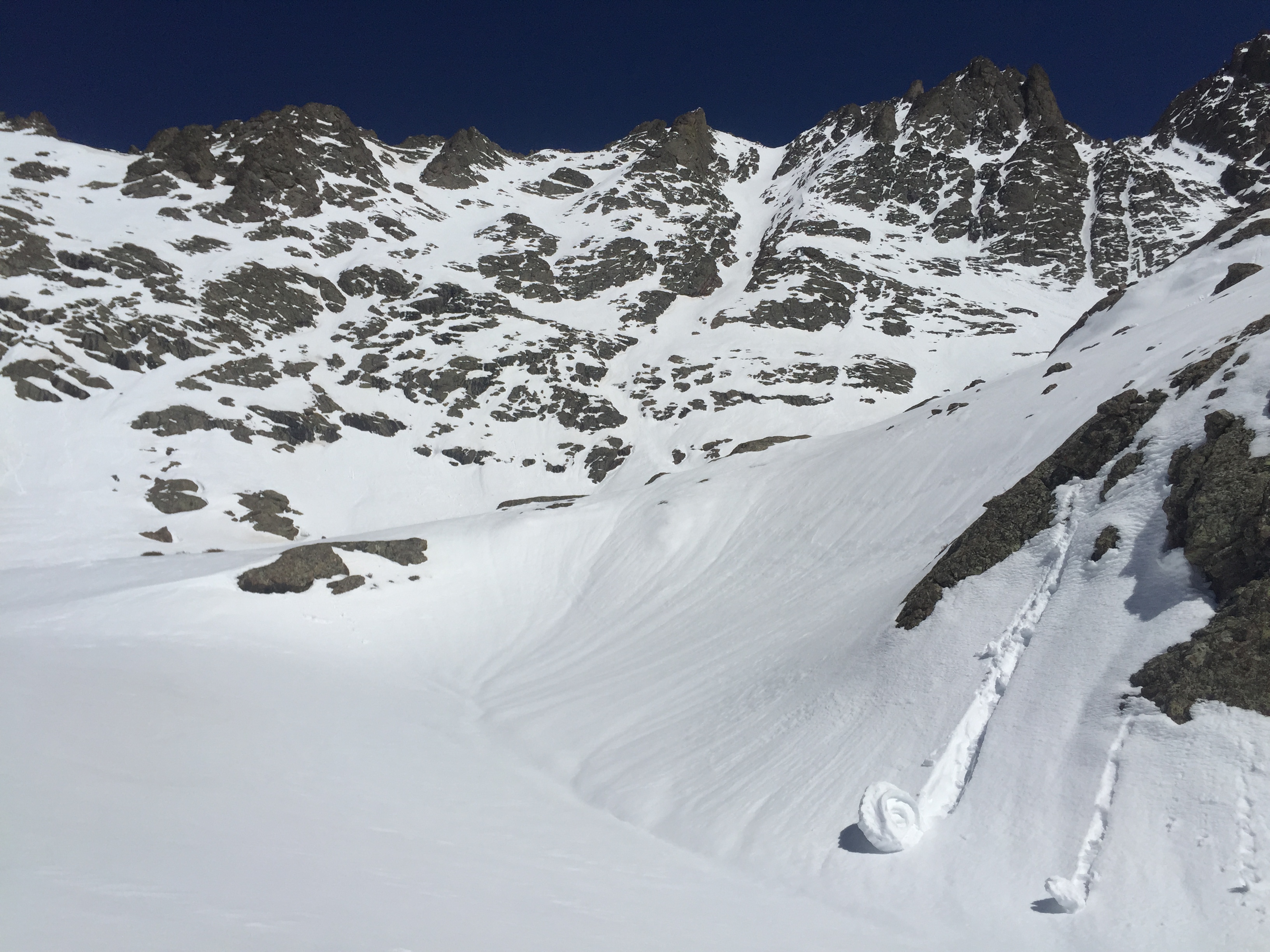 Scouting Crestone Peak- looks excellent- too warm to continue for that day, but would come back the next day!

That day I stopped over at the base of the Red Couloir for Crestone and I already knew it was too late. Fortunately I did make the right call because the next morning a giant pile of popcorn had come down the day before, and there is a good chance I could have been part of that had I chosen to go up the couloir on the 5th. 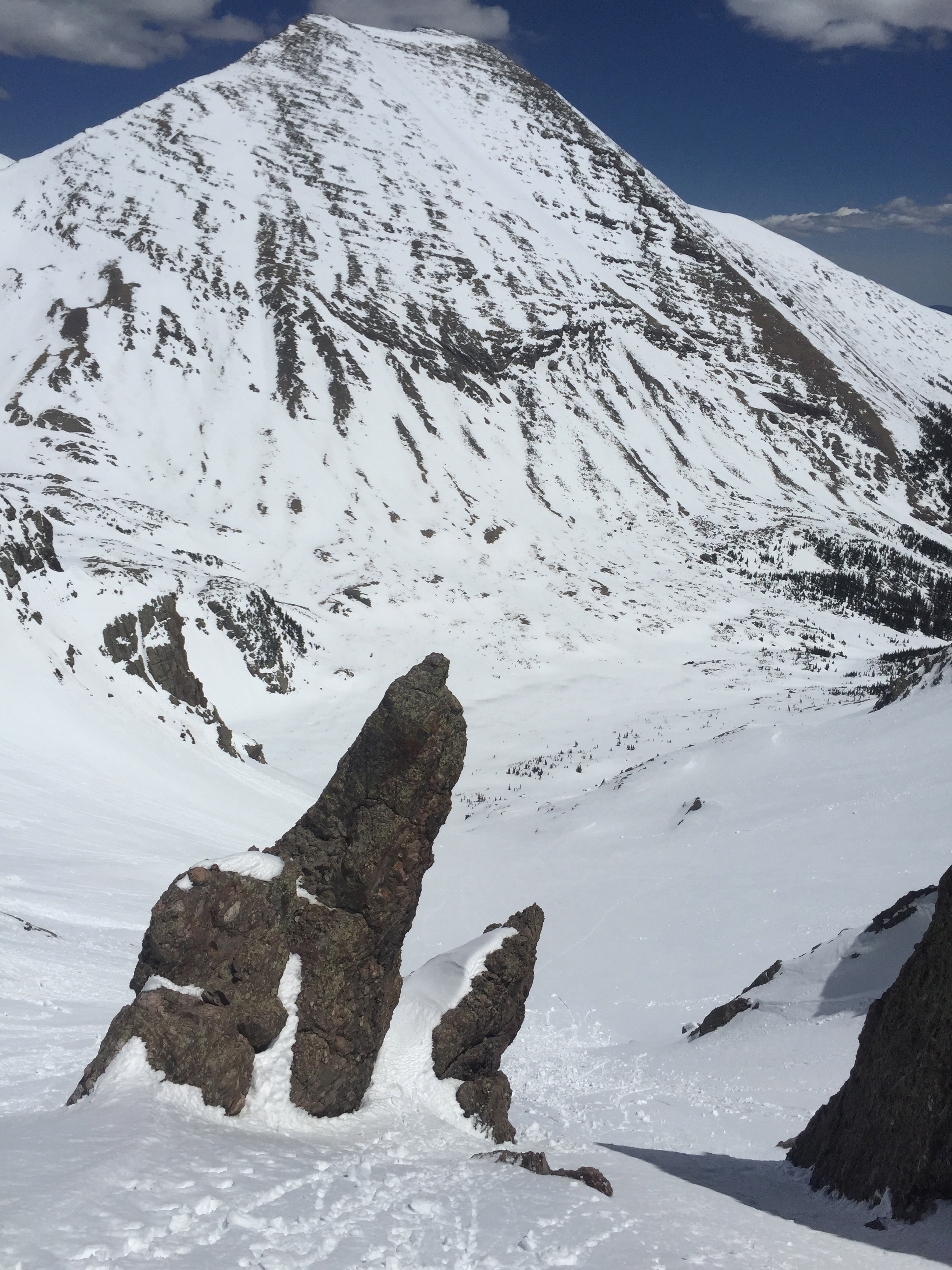 Skiing down to South Colony.

Instead I put my skins back on, and skinned back towards broken Hand saddle. Halfway up to the saddle I had to boot it up, but I remembered that this would be helpful for the next day: if I had a booter in then I could come back over the saddle rather quickly the next day. 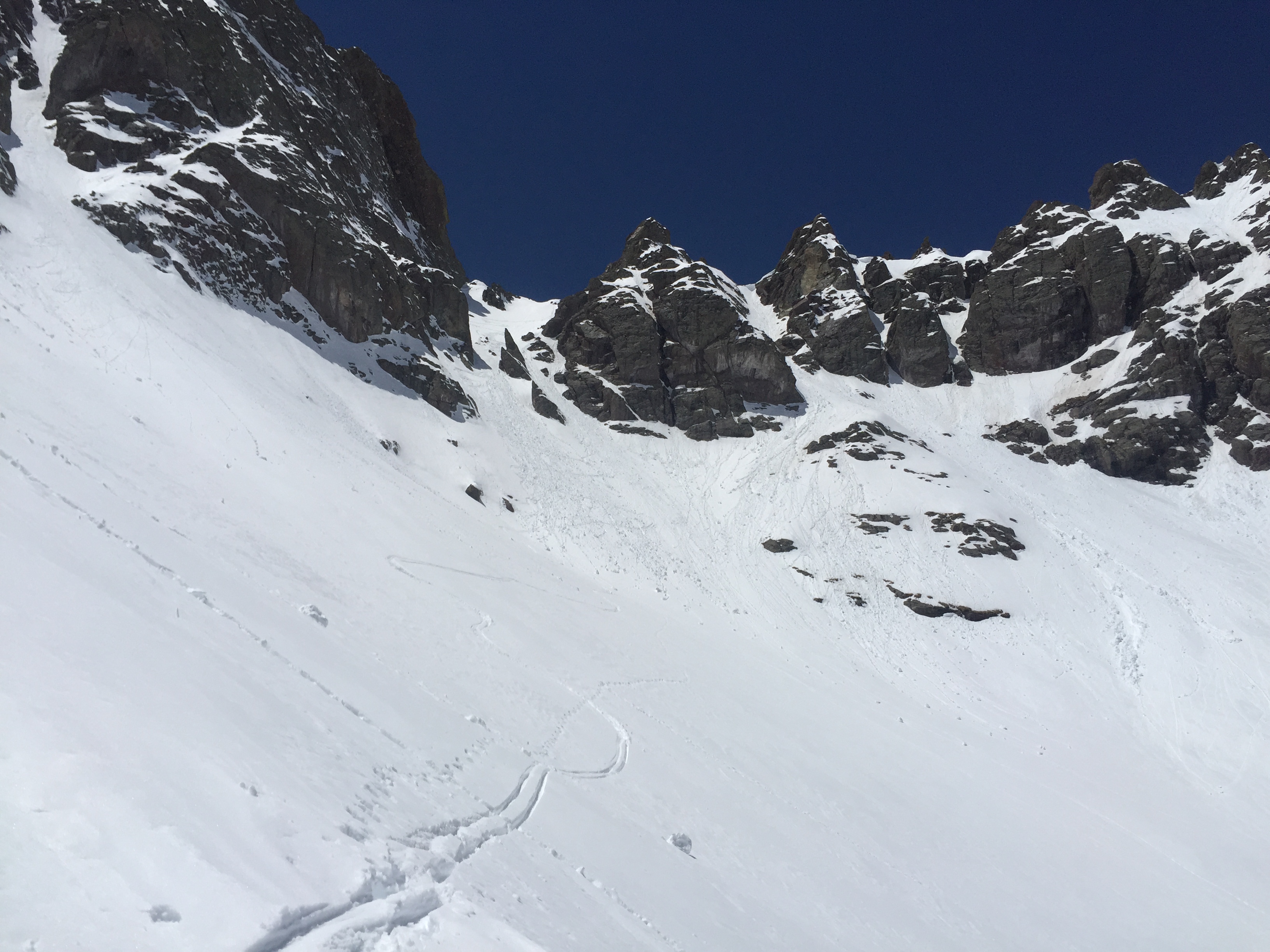 My tracks would benefit me on day 2 for the Peak.

I took an hour lunch break on the Saddle to admire my line off Crestone Needle and relax, then I dropped in and made my way down the sticky south Colony road to my vehicle. It was a long 13 hour day, but I knew the work I had done would pay off. The sunny afternoon was spent napping, eating and rehydrating. I had more work to do. 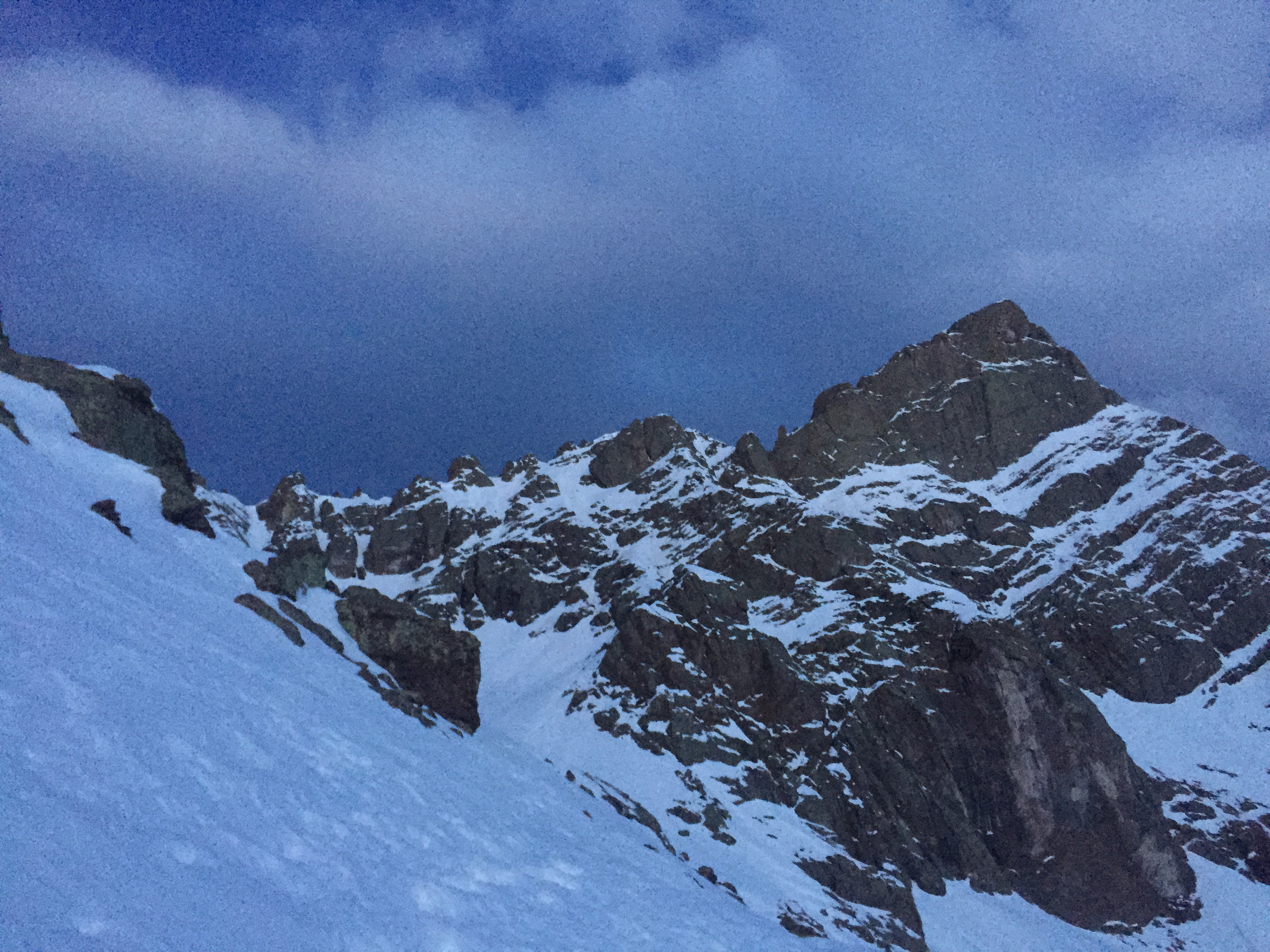 Early morning light in Day 2 headed back up and to the Peak.

The alarm went off at 1am, and I was up and at em again, on the trail by 2. In the darkness I skinned up towards South Colony lake again. By now I had all the features memorized, even in the dark. Although I reached the lake at 5am and was an hour behind the previous day, I knew I would catch up. Having broken trail solo on my last 4 peaks in a row, I was finally ready to already have a trail broken in place. 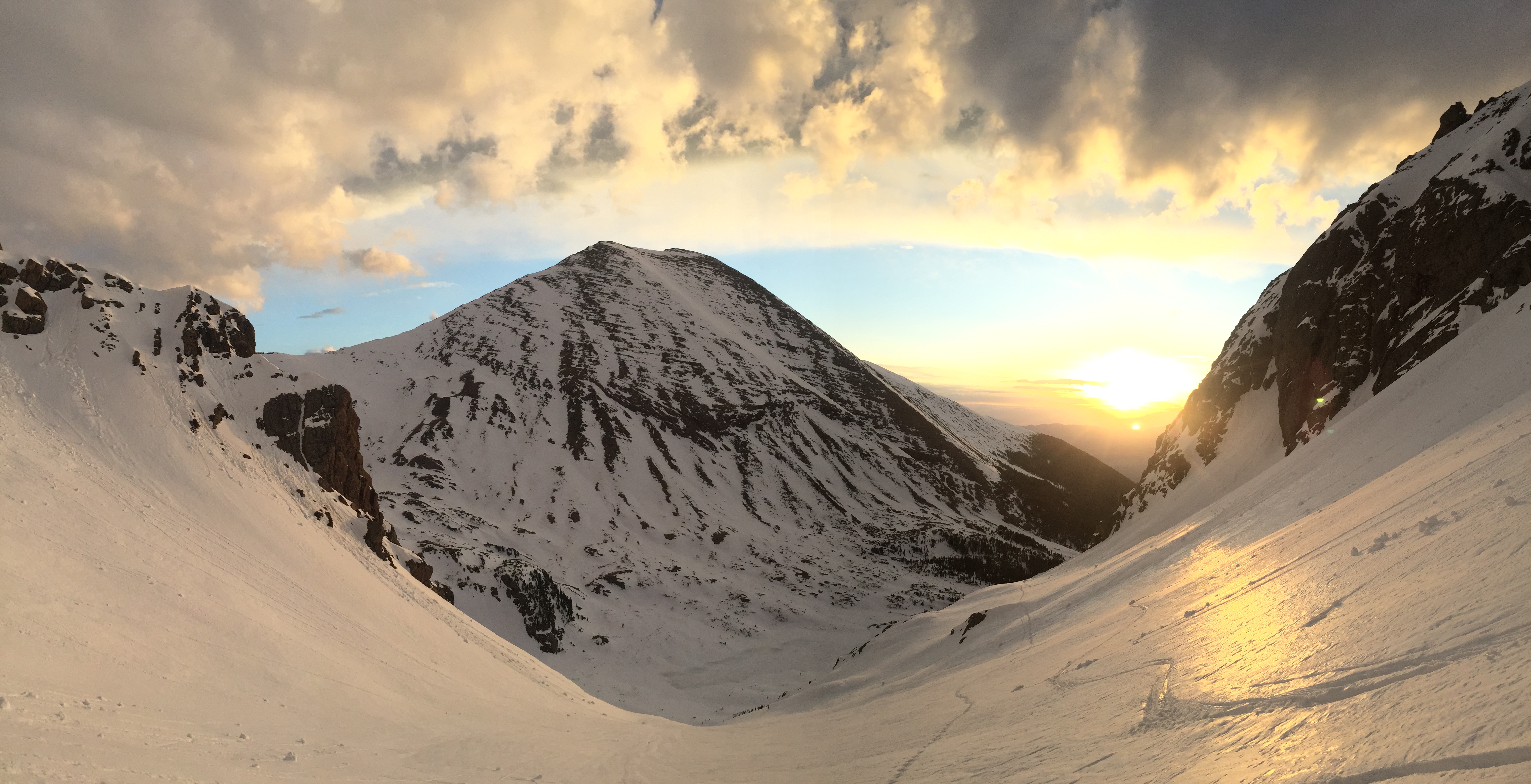 I reaped the benefits of my boot pack and made it up to Broken Hand Saddle just after 6am, and after a rest and transition, skied down to the base of the south Couloir a little after 7. Relatively fresh and excited to tackle the couloir, I put on crampons, put skis on my back and made my way up. 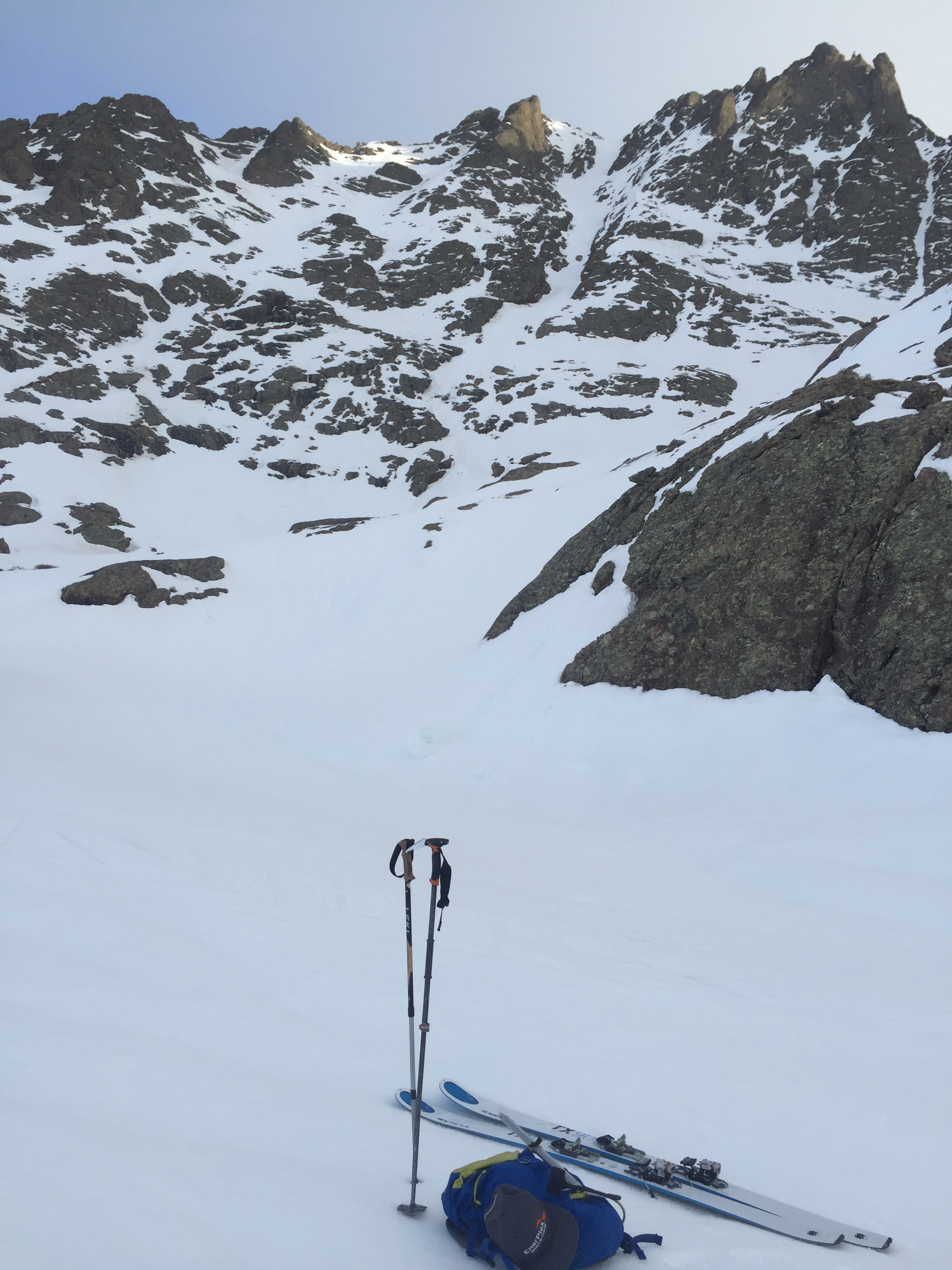 Halfway up the couloir the views to the south were outstanding, and reminded me that I was getting close. 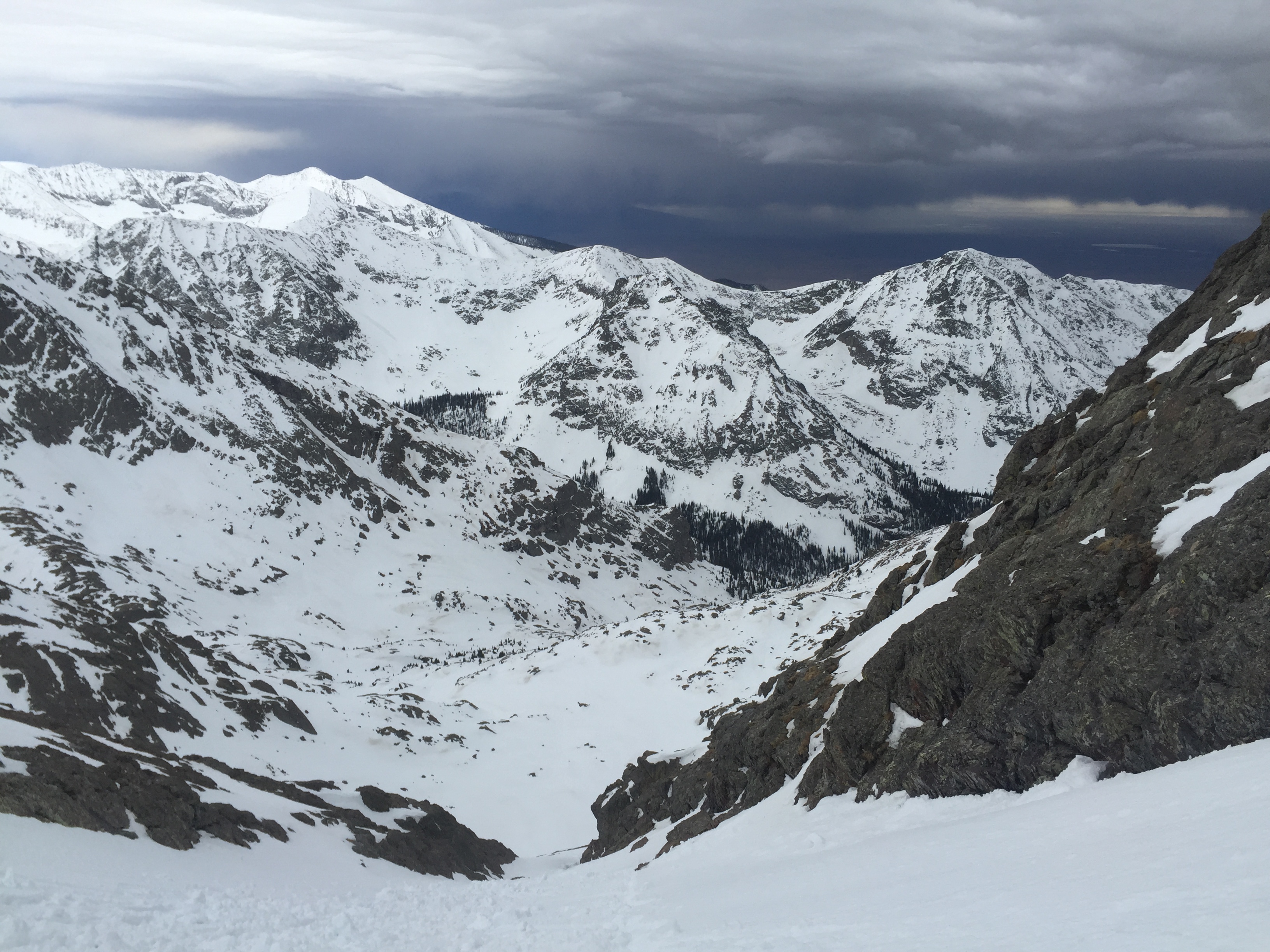 Storm is coming, I had to hustle!

Then looking south I could see it, the storm front that was forecasted to come through that morning. It was just about on time. Mean nasty looking hanging clouds, and they were about to engulf the Blanca Massif to the south. 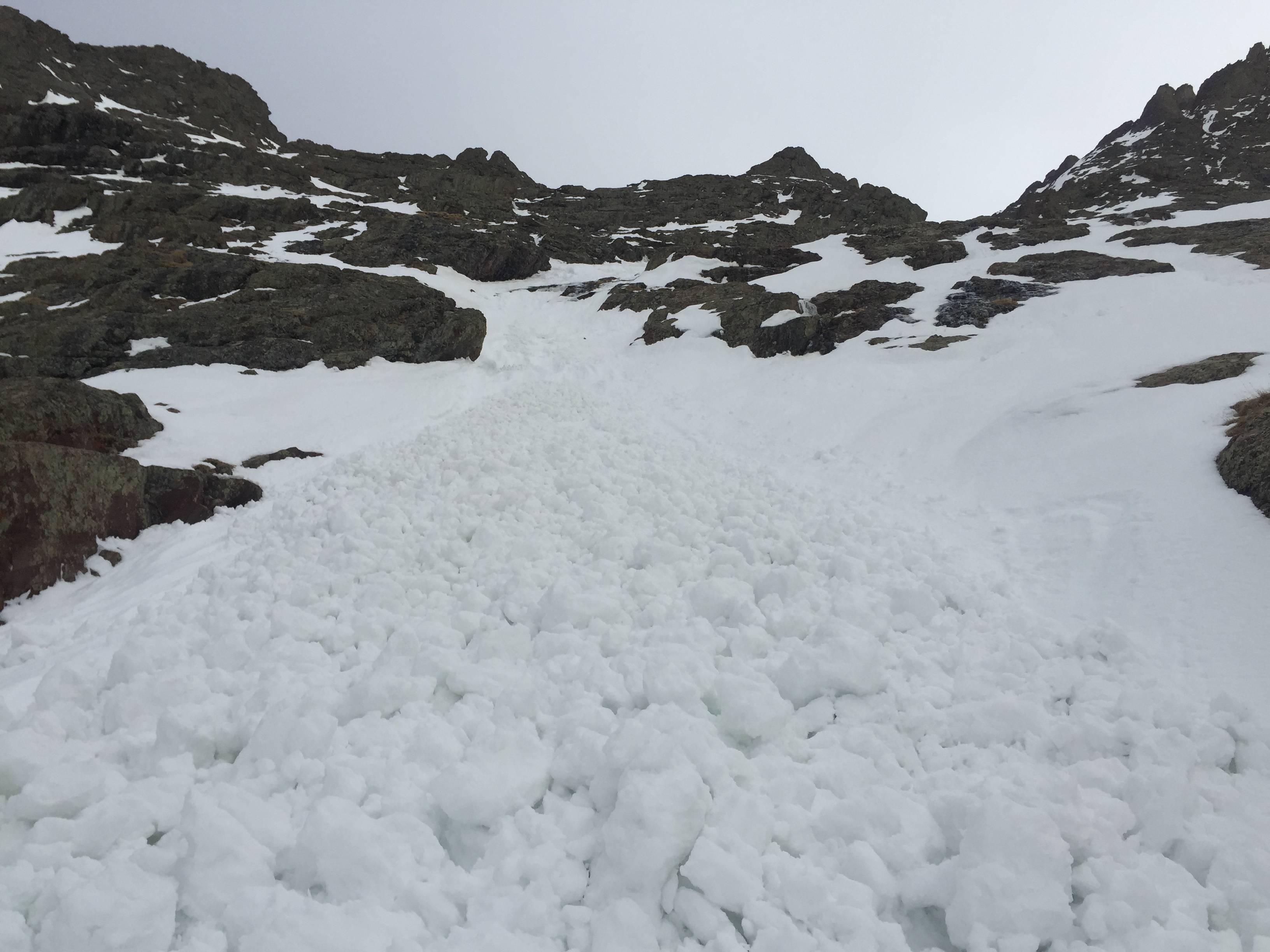 Popcorn wet slab from the day before….

I pushed on. There had been several wet slabs and rolling snow chunks from the day before, but because the approaching storms and wind, the snow was rock solid. 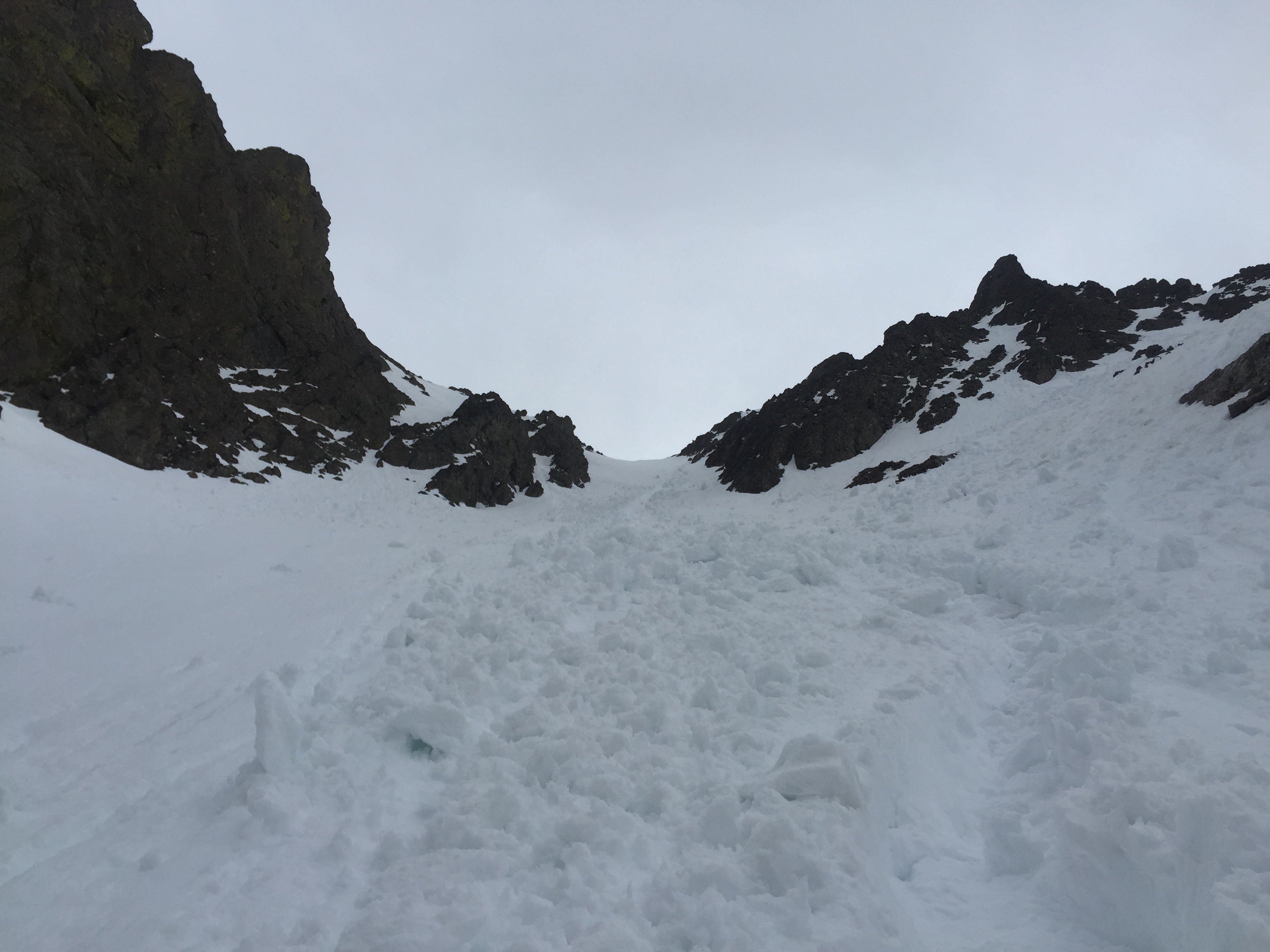 More frozen popcorn crud, and with cold conditions, there was no thawing to be had, eventually making my descent completely icy.

Footing was excellent, and I was able to go really fast. Although I knew I was going to make the top easily, I also knew that the skiing was going to be icy. I’d be on top of the snow all the way down, and there would be no spring corn this morning. Oh well. Soon I was on the Saddle between the true summit and the eastern summit of Crestone. My 6th sense took over, basically the same sense I have developed over the years. It was the same sense I used on Everest 4 years ago. “Get up and get down quickly, put this peak behind you.” So I hustled. The fog began to get thick, it was the calm before the white and gray wall of a storm would engulf me. This was my chance. I carefully traversed to the west and above the red Couloir. The entire face was loaded, but frozen solid, so that gave me confidence I would be able to traverse back off the summit in no time.  Climbing in crampons with a lack of any post-holing, which was awesome, 20 minutes later or so I reached the top. 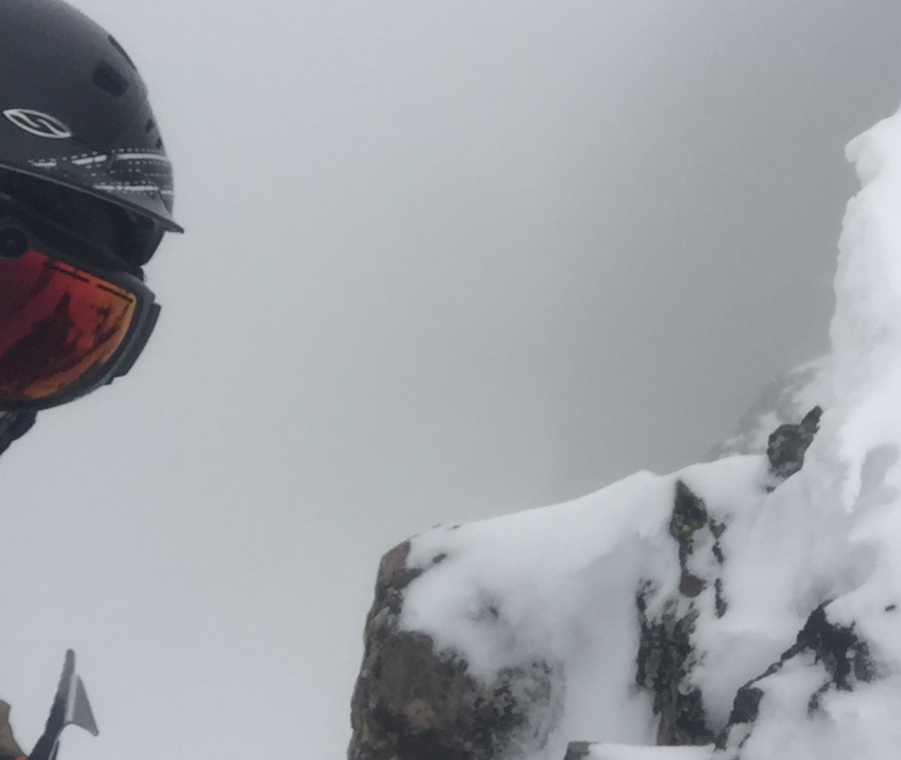 A foggy selfie tucked out of the wind next to the summit block.

The fog got thicker. I lost the Blanca Massif to the south. I was in the clouds. Fortunately I have been up on the summit 8 or 10 times in my career in all seasons, so it was like muscle memory knowing what I had to do, where I exactly was and where I would ski. I hit my SPOT ping to let my friends and family and my Mom & Dad to know I was fine, a quick drink and I was off! 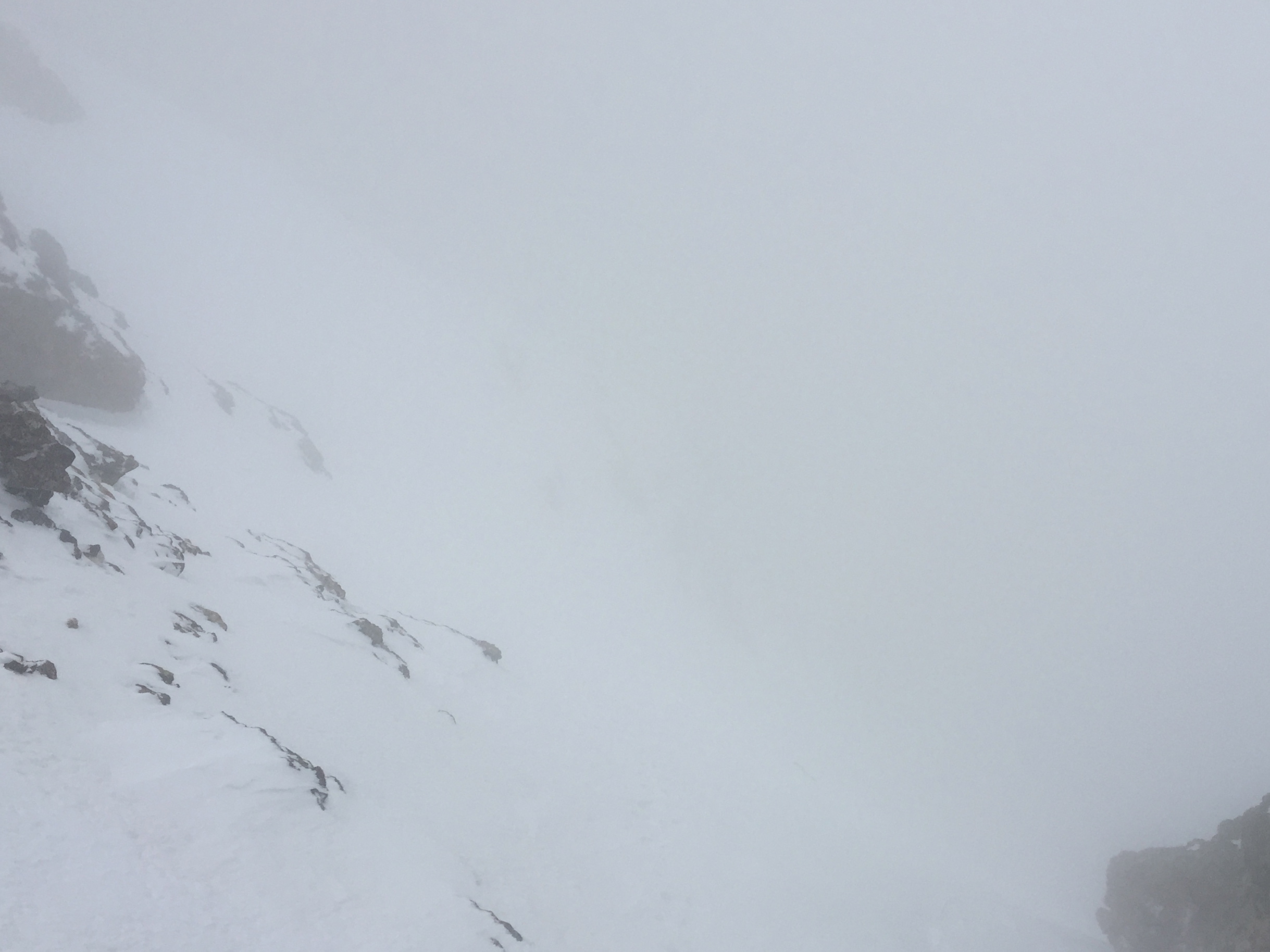 Traversing back over to the top of the Red Gully and the saddle, looking down from the small summit ridge before dropping to traverse.

As soon as I bypassed the small dip and then the rippled portion of the summit cornice, the strong winds of the front hit me with snow and hail. I braced myself for the direct hit. 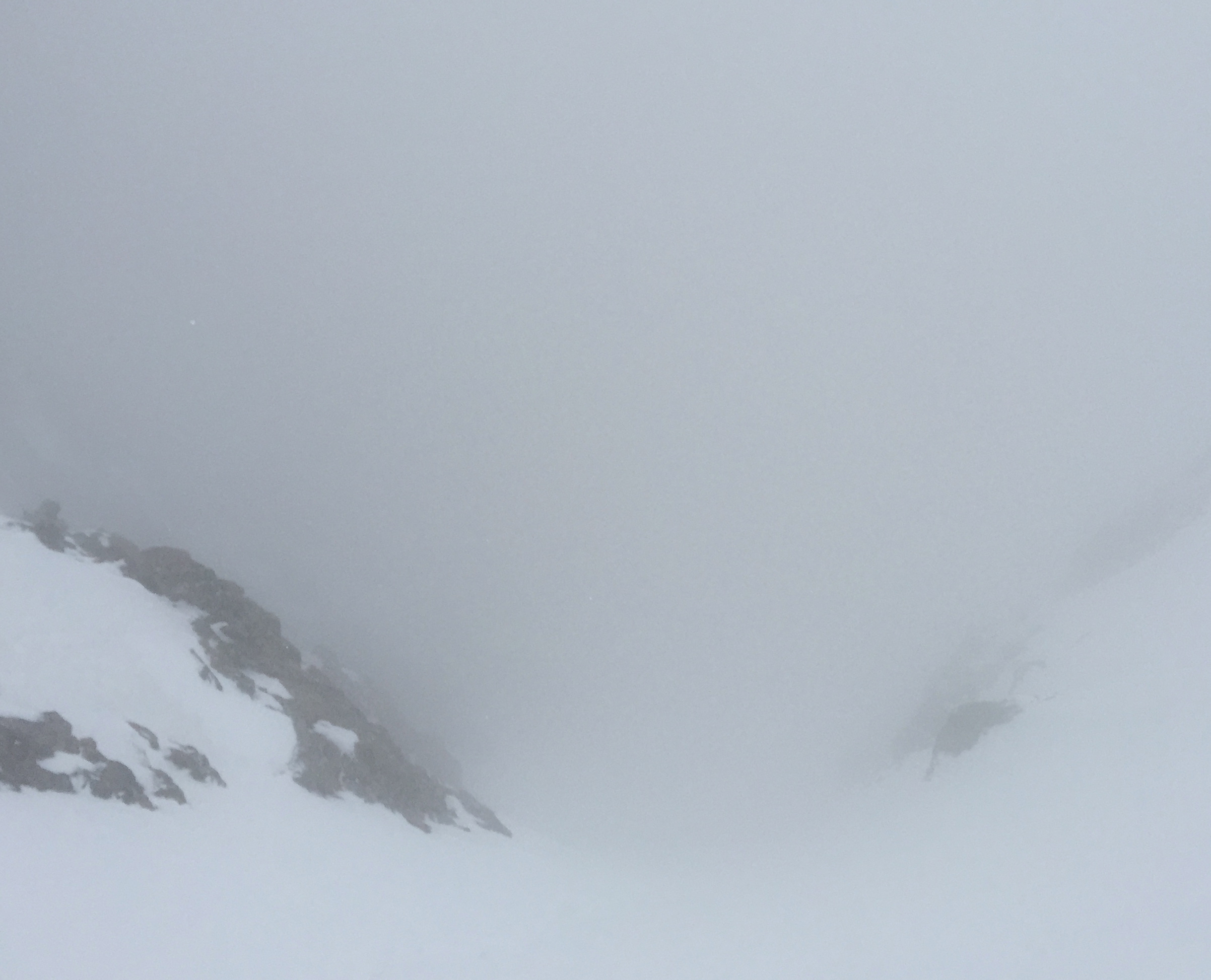 Looking down from the saddle, the worst was over, time to ski icy snow…..hoping for visibility to improve.

Cckckcckccc! The icy descent was less than favorable. I traversed and side slipped and traversed some more to get to the cornice of the top of the Red gully/couloir. The visibility sucked and the snow was coming down hard. Oh well, can’t win em all. Goggles are nice to have on days like that. 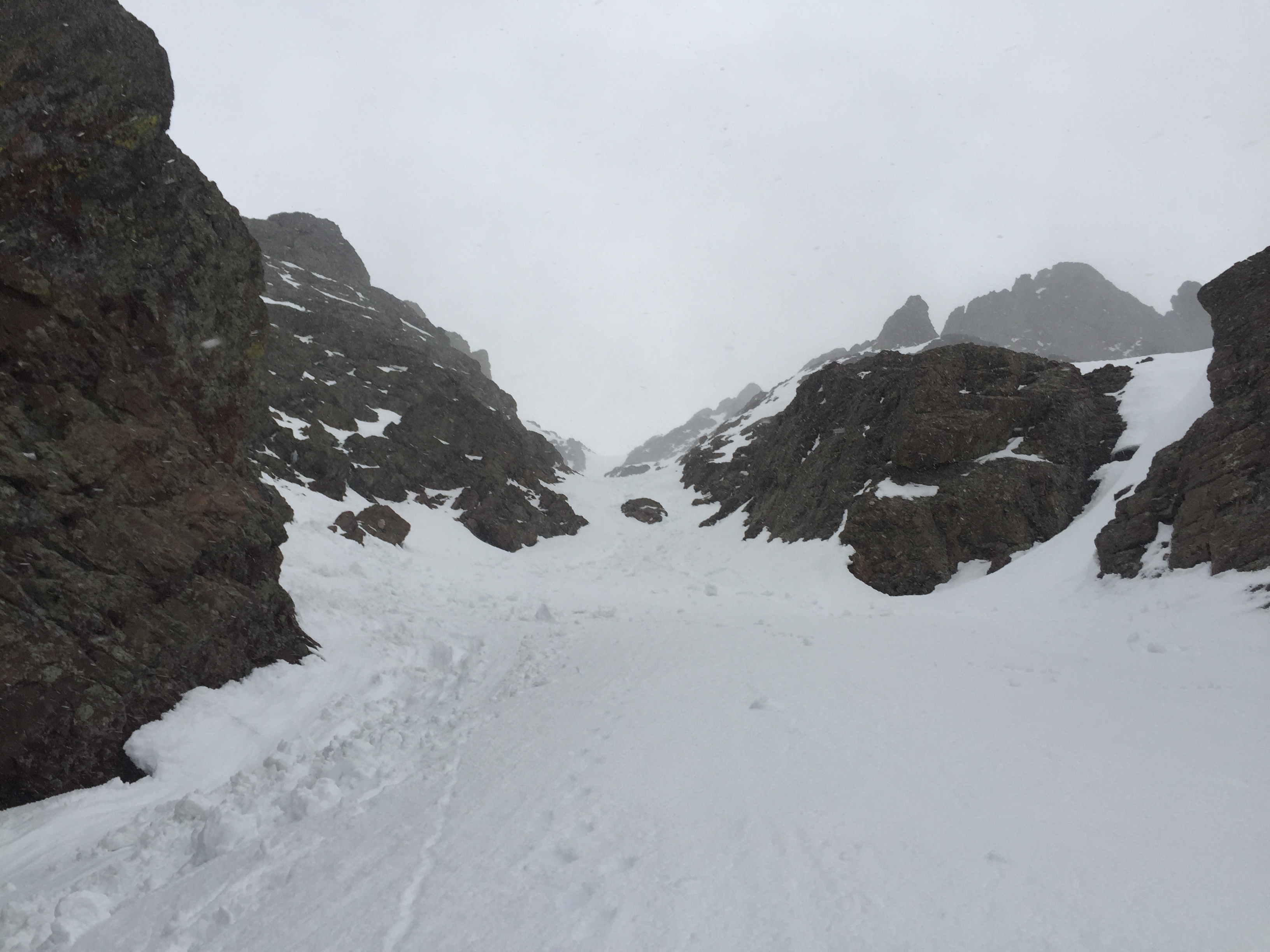 Looking back up after descending from the saddle, snow so icy and crappy, not an ideal ski to the least bit.

Lower down in the colouir the visibility improved, and as the upper mountain stay engulfed, I was back down to the vicinity of cottonwood lake in minutes. Compated to the Crestone Needle, the Peak felt much less steep and actually really simple. Concerned the storm front would stick around all day, I quickly transitioned to skins, bid farewell to Crestone, and was skinning then booting up to the saddle again (making use of my boot tracks from the day before) reaching the saddle in no time. 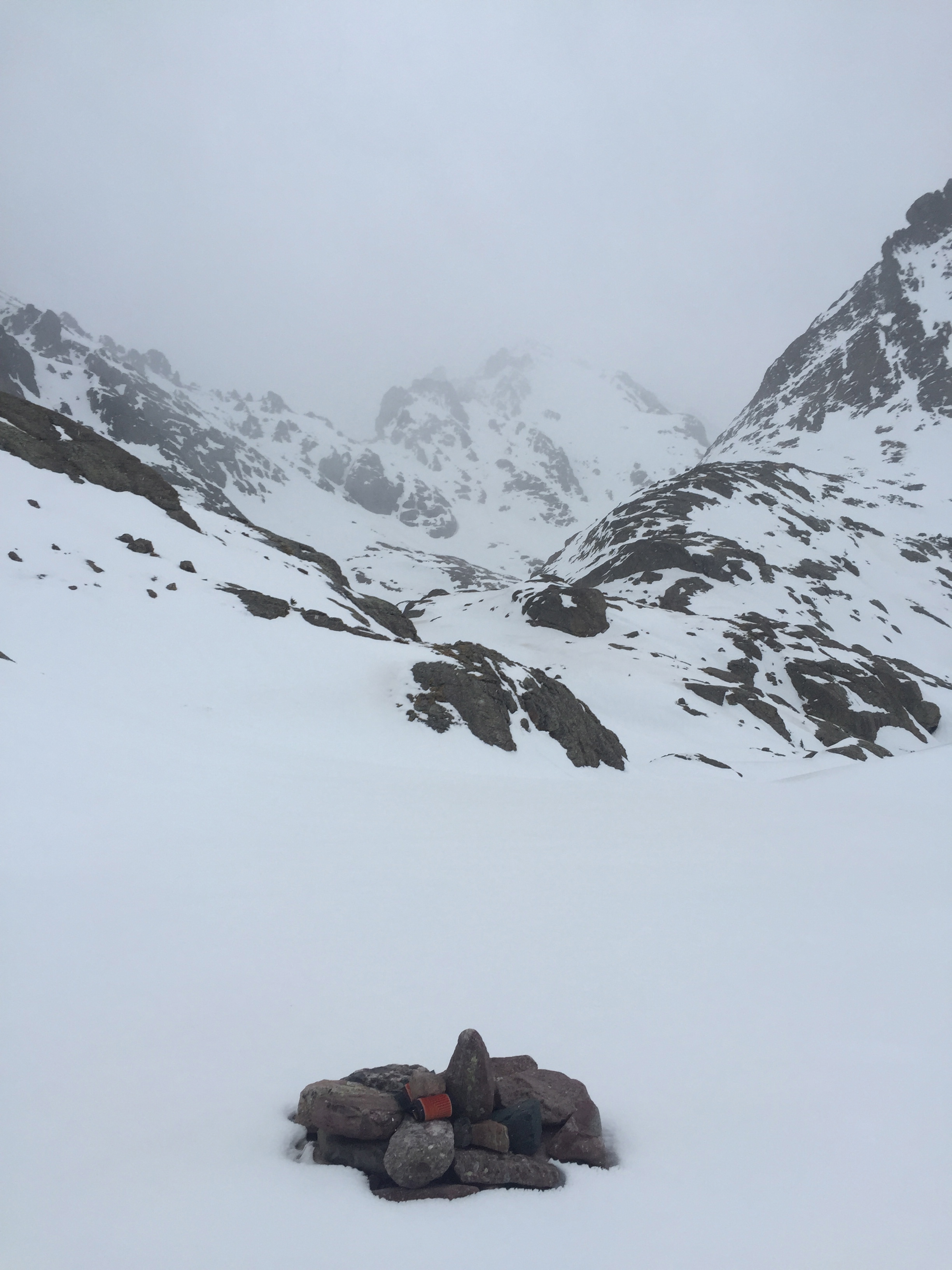 Heading back towards Cottonwood lake and retrieving my skins.

With winds starting to increase for the day, it felt awesome to drop back down to South Colony Lake-, head into the woods and follow my tracks back down to my vehicle by early afternoon. 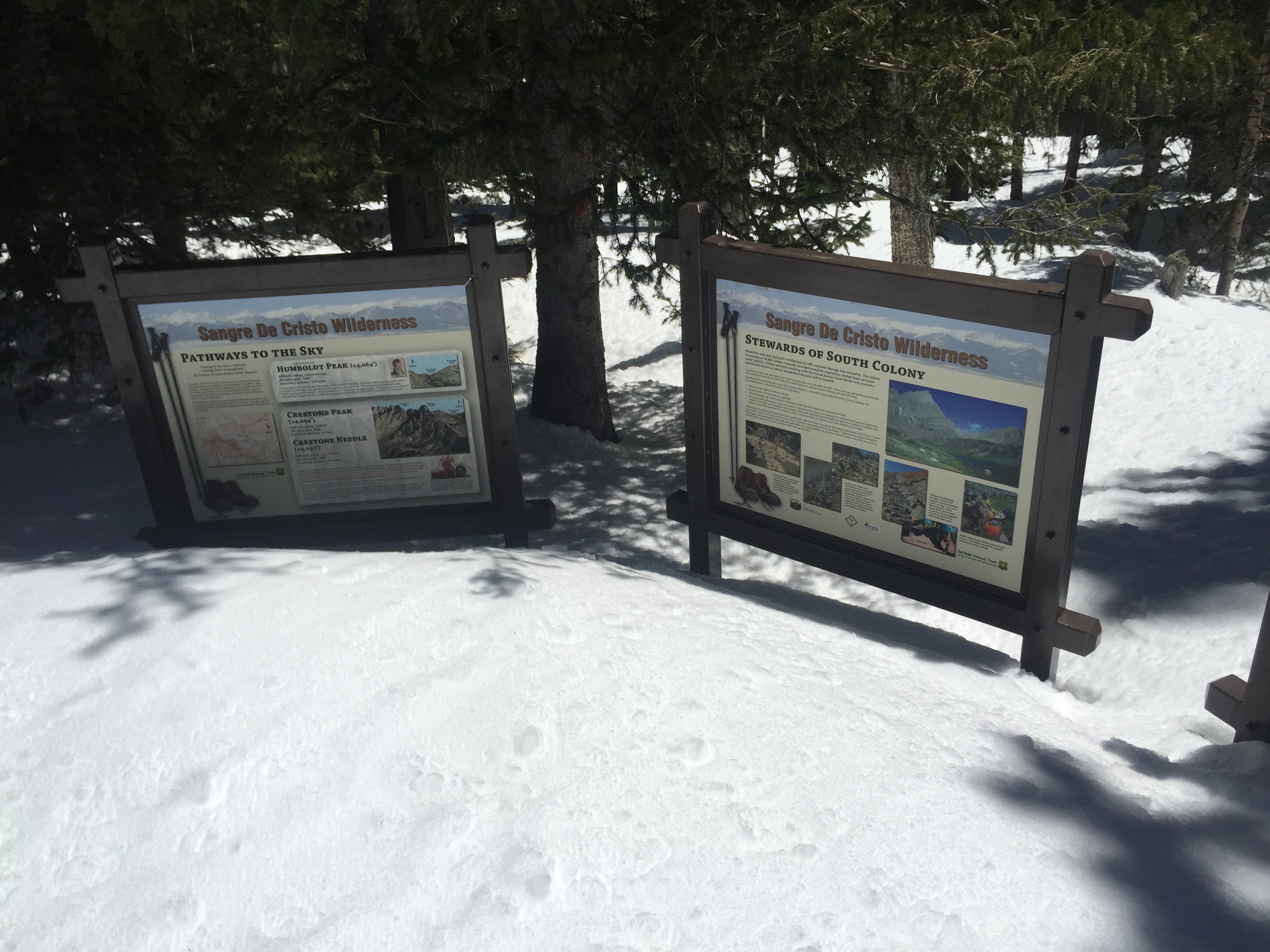 Back down to the woods safely with both peaks complete.

Looking forward to wrapping up the Sangre’s with Kit Carson next!