Crestones (Left), and Kit Carson (right), from the top of Humboldt.

The winds this winter on the Colorado peaks at times have been absolutely brutal.  This was especially true for me last week when I headed out to ski a 14,000′ foot peak in Colorado called Humboldt. Humboldt is located in the Sangre de Cristo range in southern Colorado. On my trip I had a goal to possibly ski two other peaks in the area, so I packed a heavy load of gear into a base camp that was near timberline and settled in.  In the morning my friend Scott and I skied up a gorgeous basin and started to climb a steep couloir (snow chute) towards our first goal.

Half way up, the snow became so soft and powdery that I sank up to my waist with every step.  Then the winds started blowing, and moments later I heard a “whump’ sound come from across the valley. Somewhere the snow was settling, and the “whump” sound indicates snow instability. Then I noticed to my left and above me that there was a large snow blown crown of powder that had not slid from where it was perched. 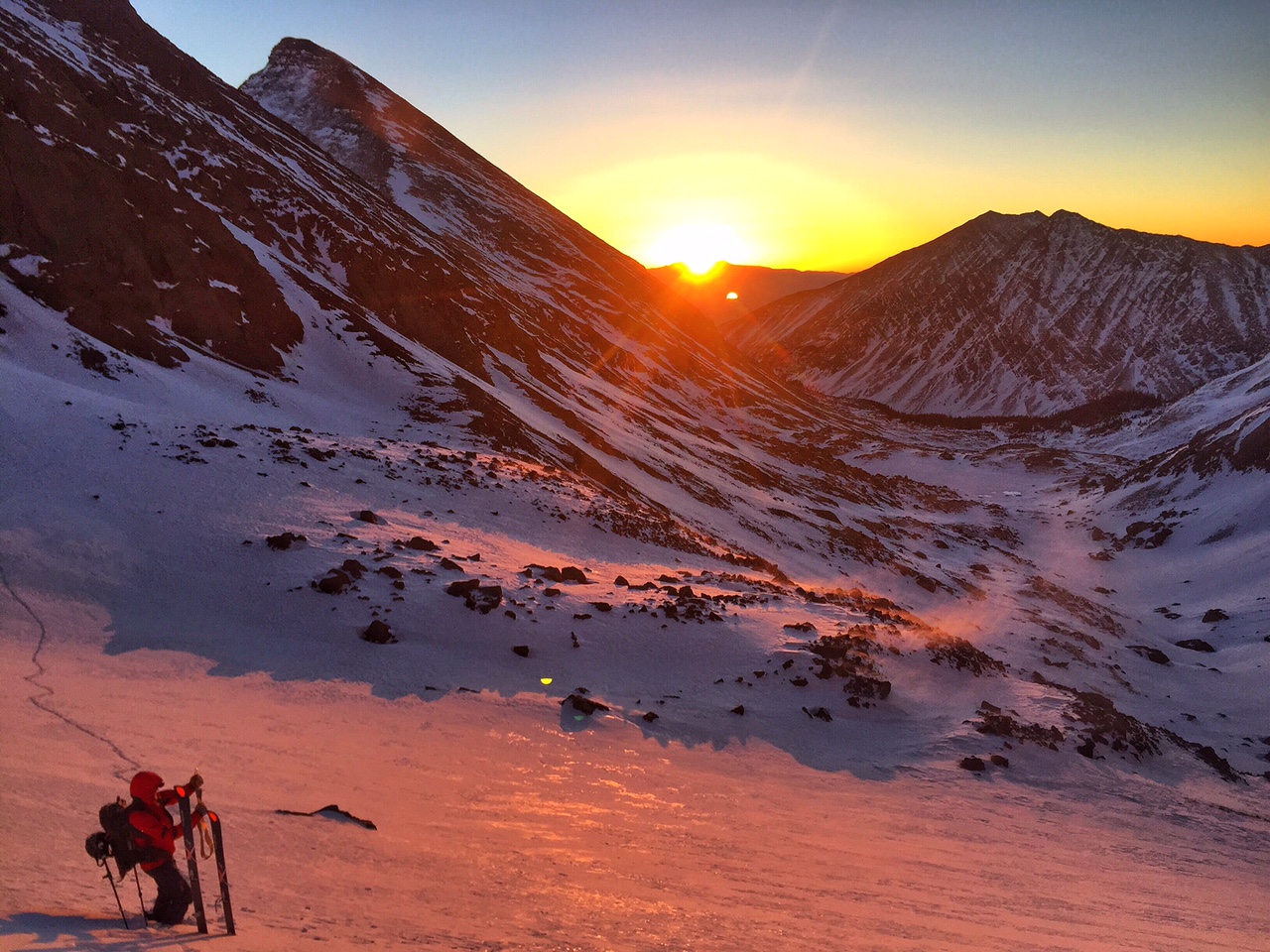 Knowing how powdery the snow was, we backed off, and quickly put on skis and skied down an awesome basin back to a frozen lake. 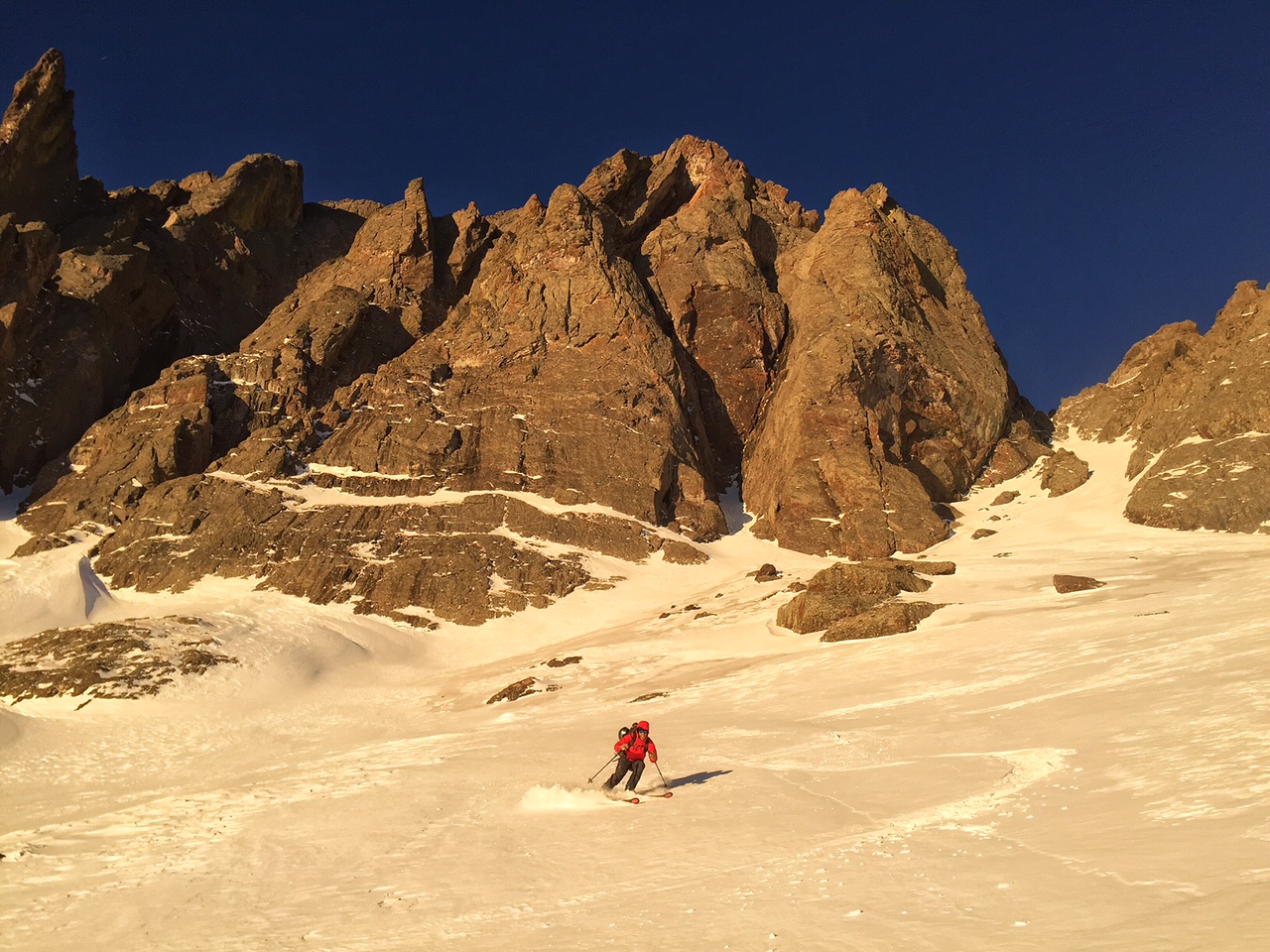 Just like in life, as in the mountains, plans can change, and even though I had backed off from the summit of Kit Carson, I felt confident it was the right choice.

But then a new opportunity presented itself: Humboldt Peak.  There was still time that morning to go and do one of the peaks, and so I set off to climb the ridge of Humboldt.  It might have almost been too late, but I dug deep and went anyway. (Scott had chosen to head back to camp and wait for me there)  The wind on the ridge got stronger and stronger, up to 60 mph. 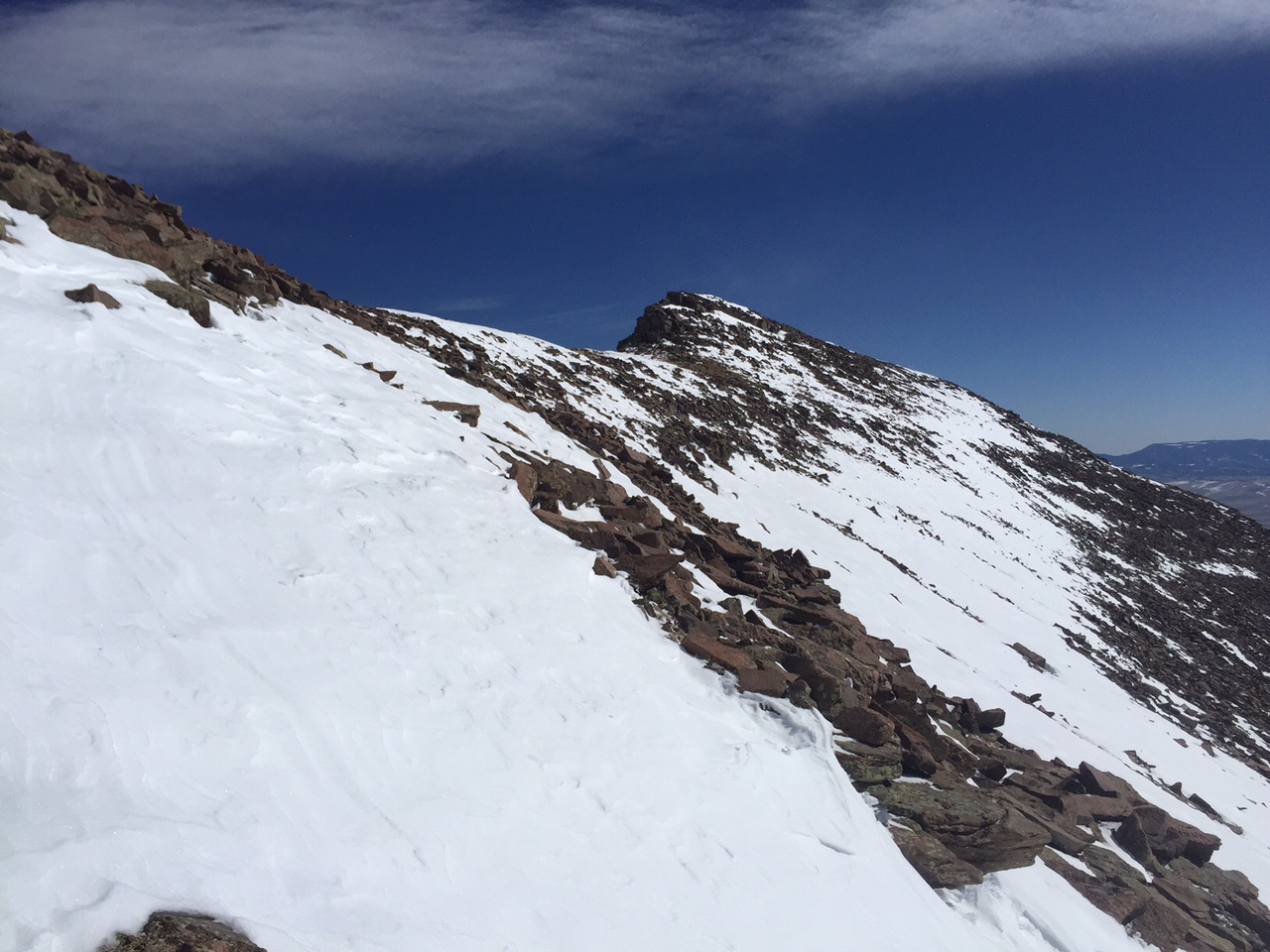 I had my skis on my pack and they almost acted as sailed to blow me away.  Talk about chaotic!  For 2 hours I battled up the ridge, sometimes crawling, sometimes tripping, and sometimes being blown away. I got tossed a few times like I was in a washing machine. It was so chaotic!

Then when I was just about to quit,  when I crested the ridge for the final 500 yards to the top, I got on the opposite side of the ridge and walked in the sun. 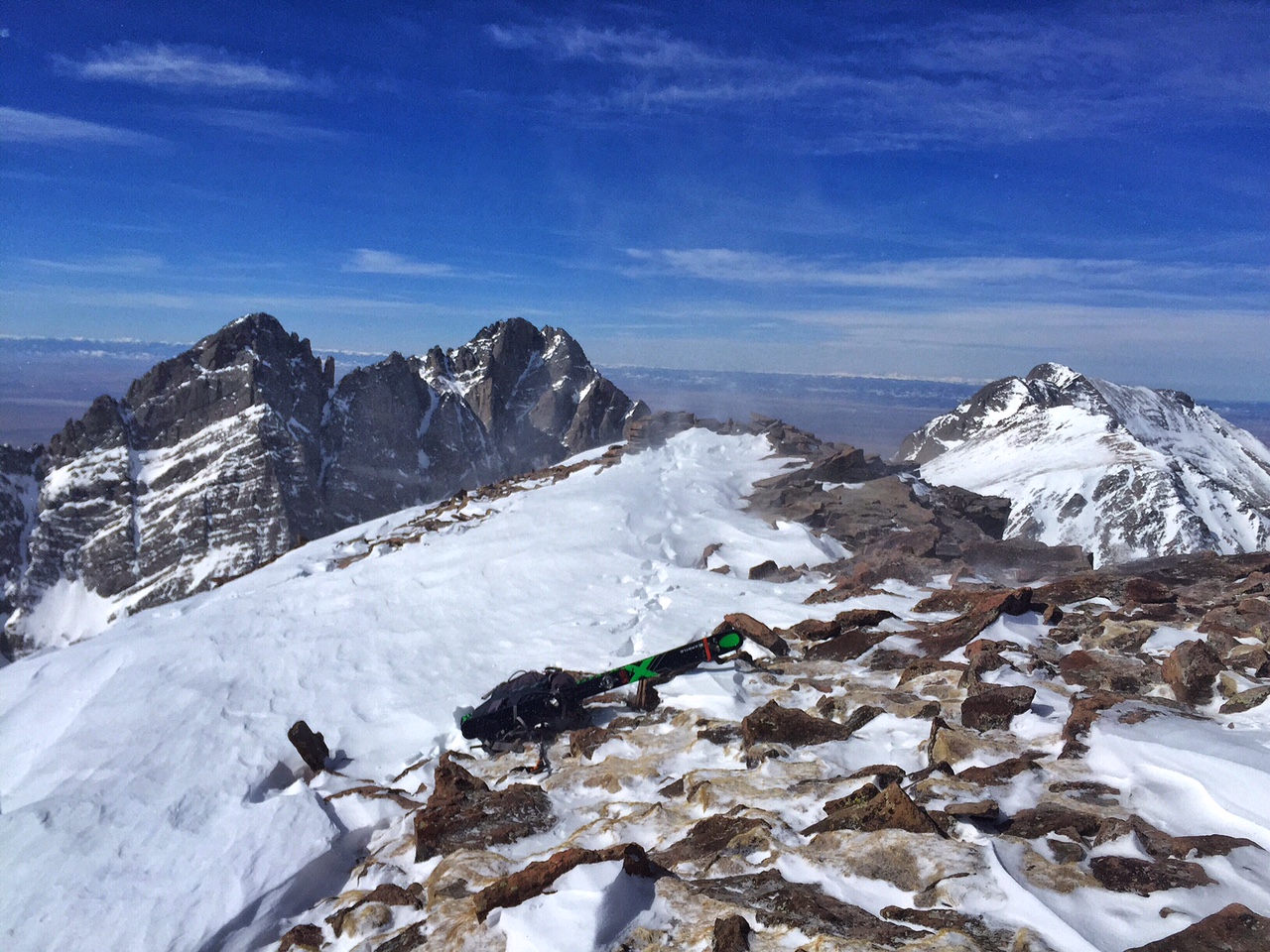 THE WIND STOPPED! The sun warmed me up. I was amazed how one side shielded me from the sun. I arrived on the summit and it was incredible, views in all directions and the winds started to die off. After a rest and a snack, I looked down the south face and saw my ski line. 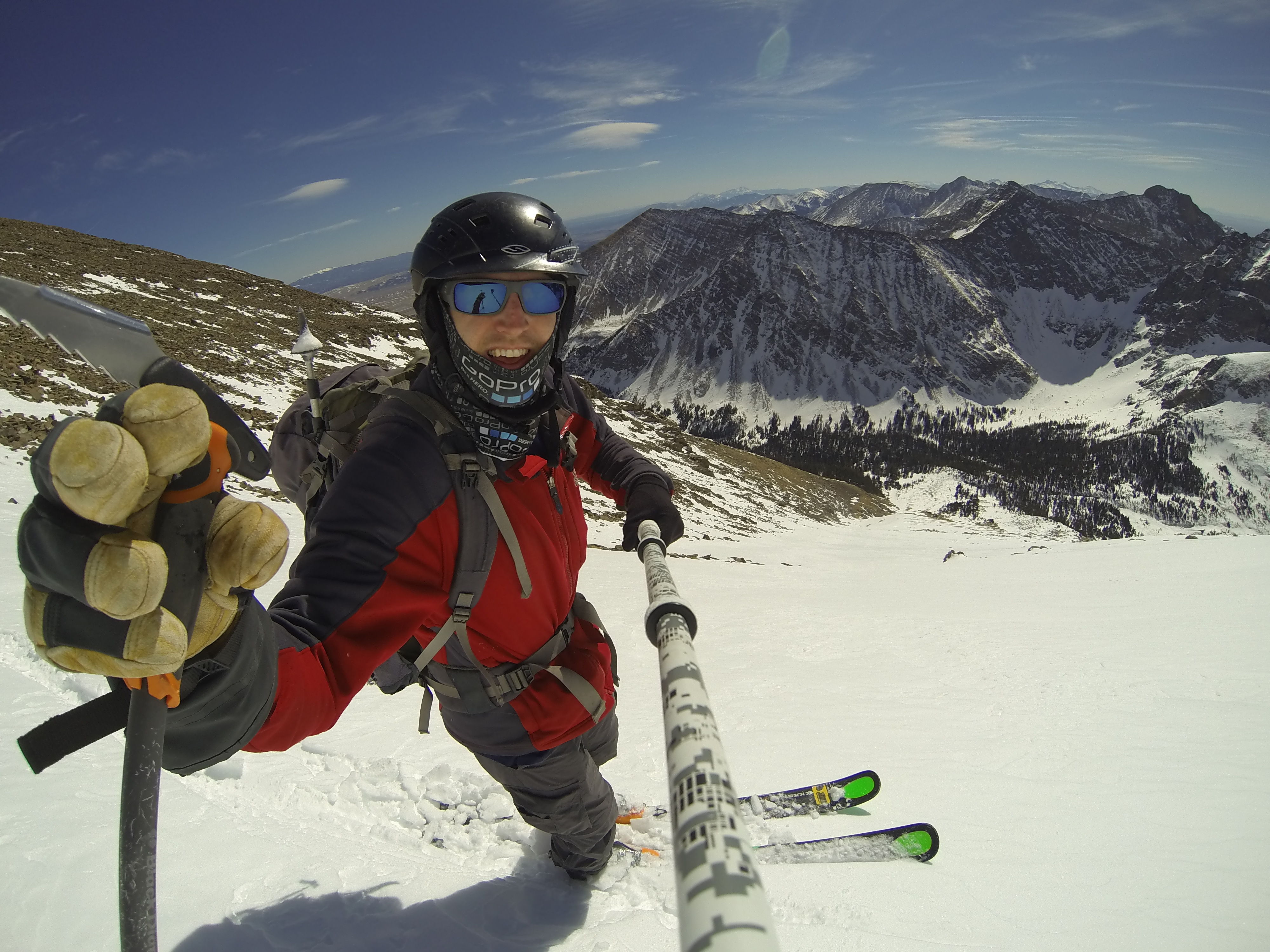 Dropping into the south face.

Things turned out for the best and that moment felt amazing! Then it was time to ski. In the warming morning sun the ski line was in perfect condition. 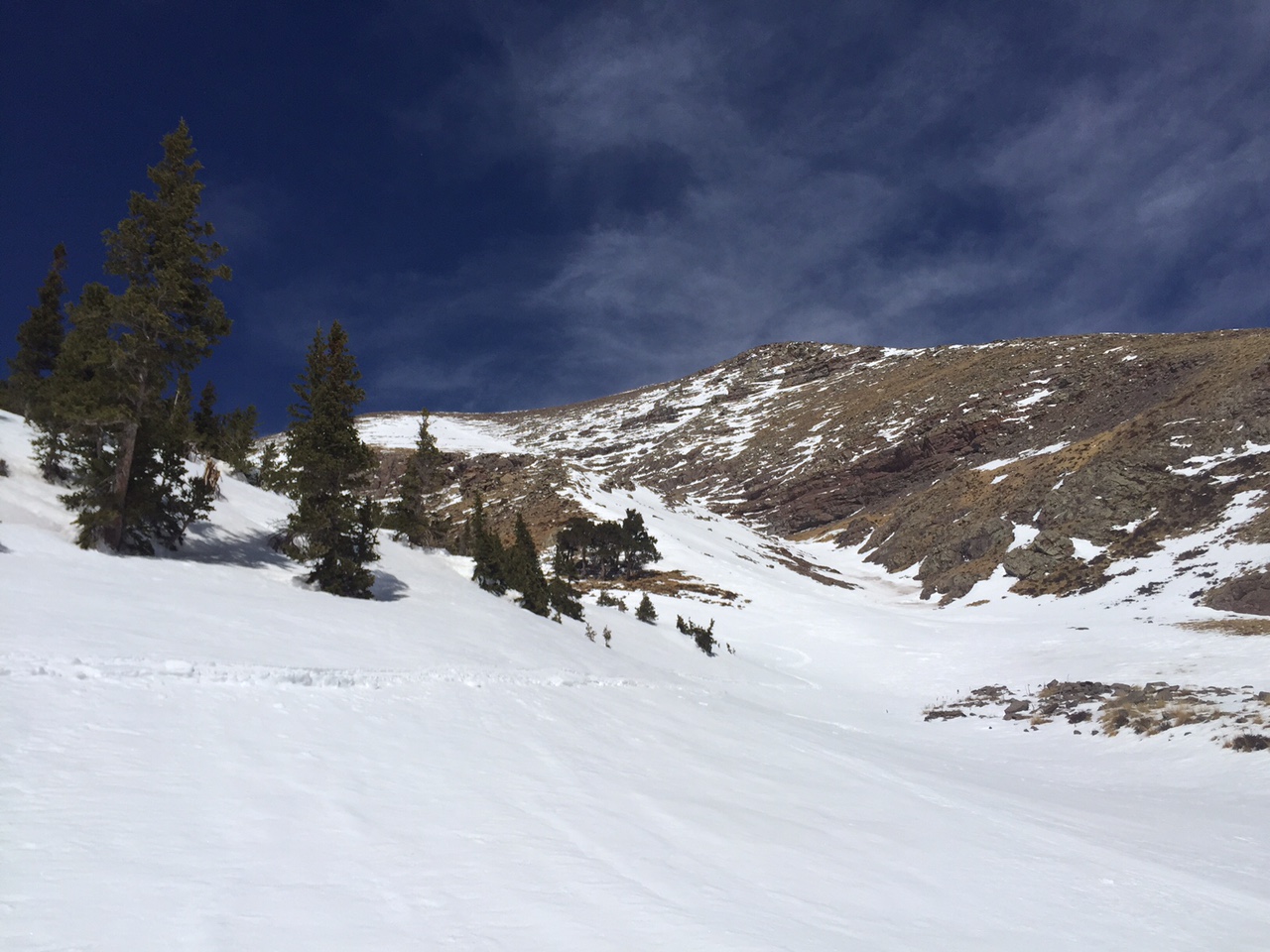 Looking back up at the south face and couloir skied from above left down to the center.

I was back to my camp by lunch, and with such an accomplishment under my belt for peak #10, and it was brilliant!    Although when I got back to camp the winds came back! I packed up and got the heck outta there! 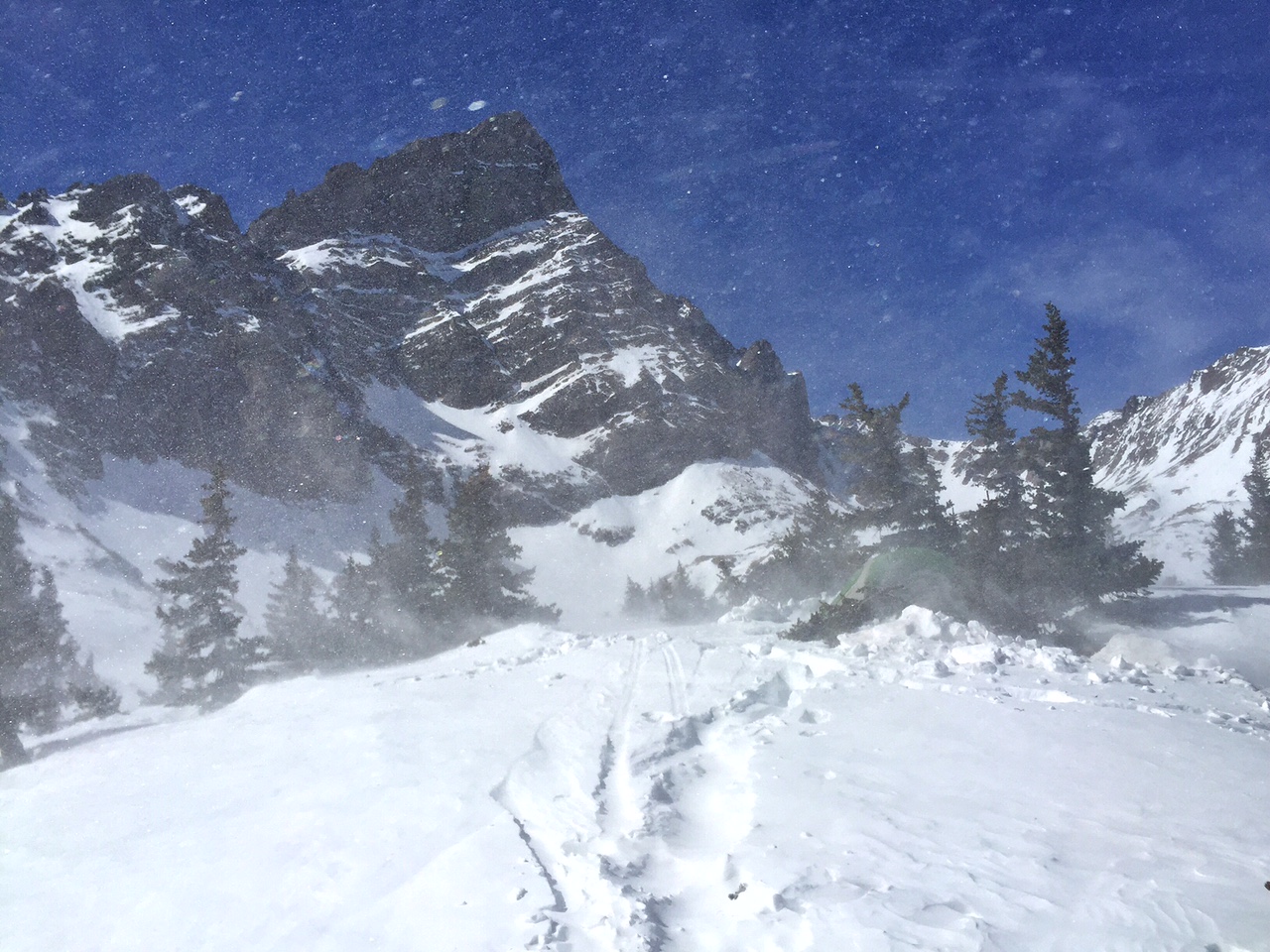 “Before the beginning of great brilliance, there must be chaos”

Stay the course and weather the storm.