Ski Route: Buried far down the Halfmoon Creek Road, slog to North Halfmoon Trailhead, up and down the Southwest Face and south ridge of Massive.

Looking back down the North Halfmoon valley as the storm rolls in while ascending Massive.

The weather on the first day of May wasn’t supposed to be good at all.  But there was going to be a weather window in the morning – something we have been seeing a lot in-between storms, and especially in early morning hours because the sun’s energy fuels storms after 10 or 11 am this time of year in these patterns. 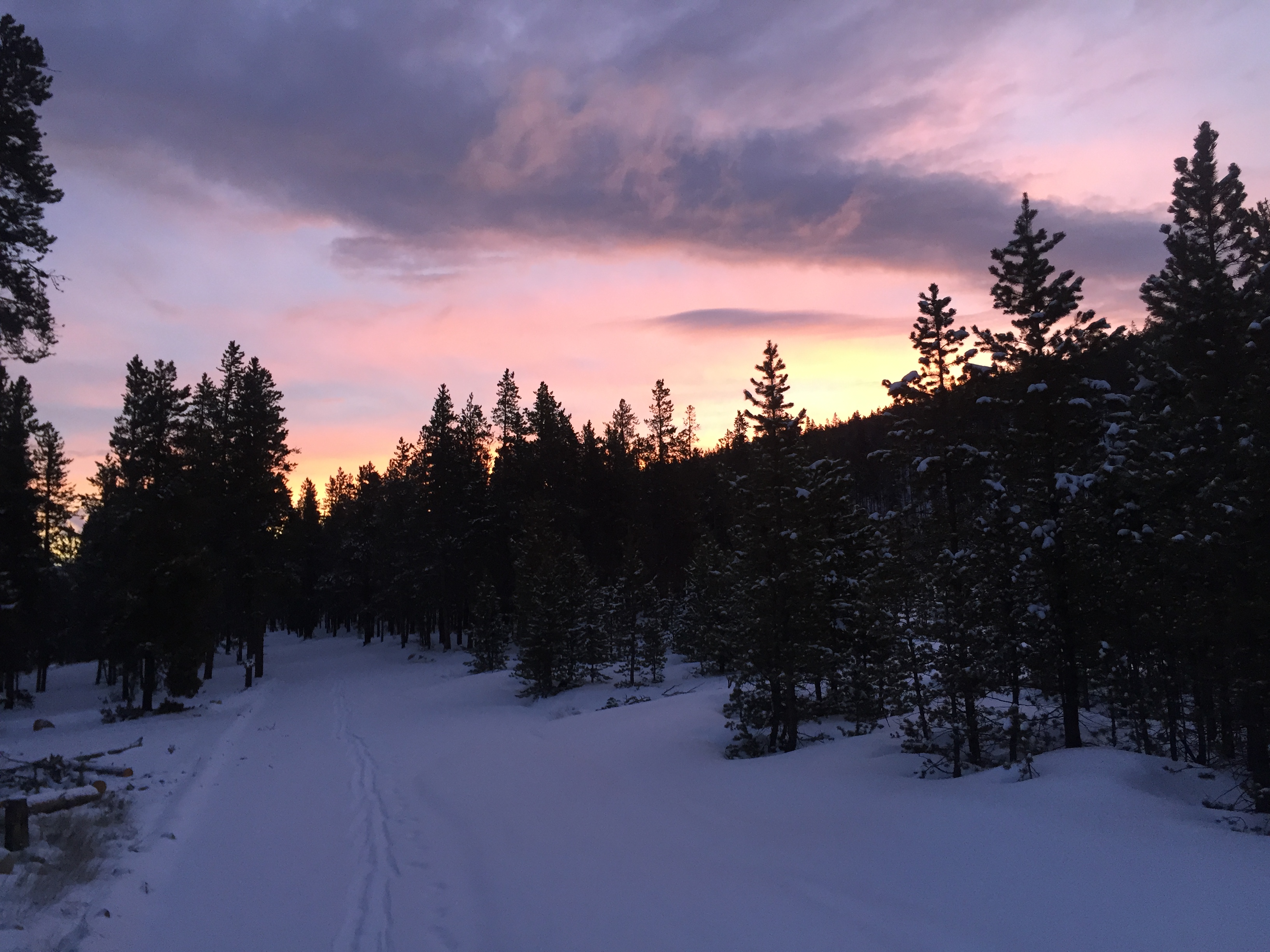 Magical hour starting up Massive on the road., looking back on my fresh tracks.

Mount Massive is the second highest peak in Colorado, and the second closest 14er to my home in the Vail Valley, so I have probably skied the peak a half-dozen times in the last several years. I can generally get to the trailhead in a little less than an hour, so in my mind this peak was kind of like a home game.  Its high, and has lots of excellent ski terrain. Knowing that I could sleep in my own bed and leave my house around 5am I figured I would just go give it a shot, I could always turn around. 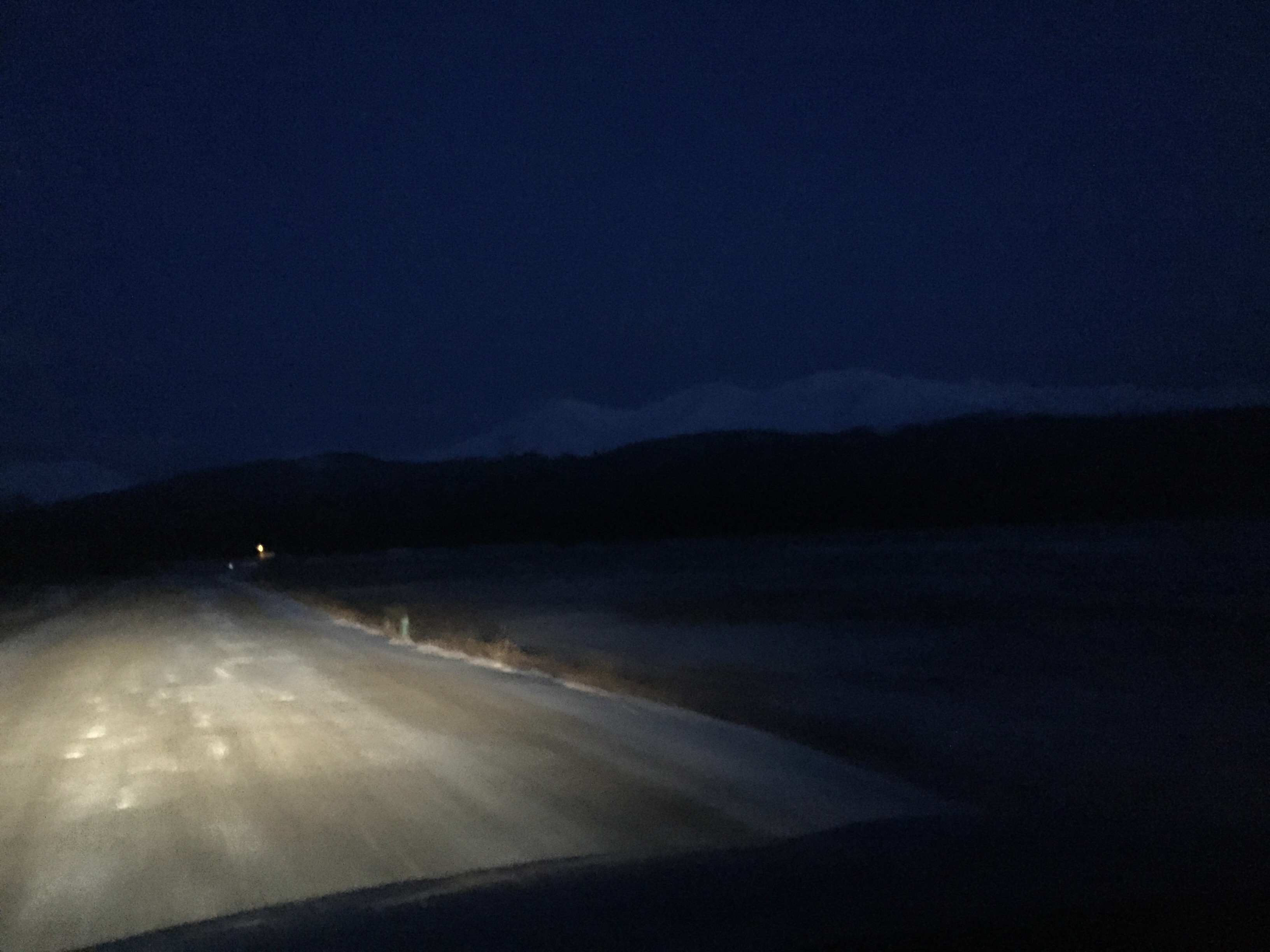 Massive- covered in white in the first light of the morning.

As I drove through the dark and the oncoming morning light – the stars were out and the skies were clear, that was a great sign. 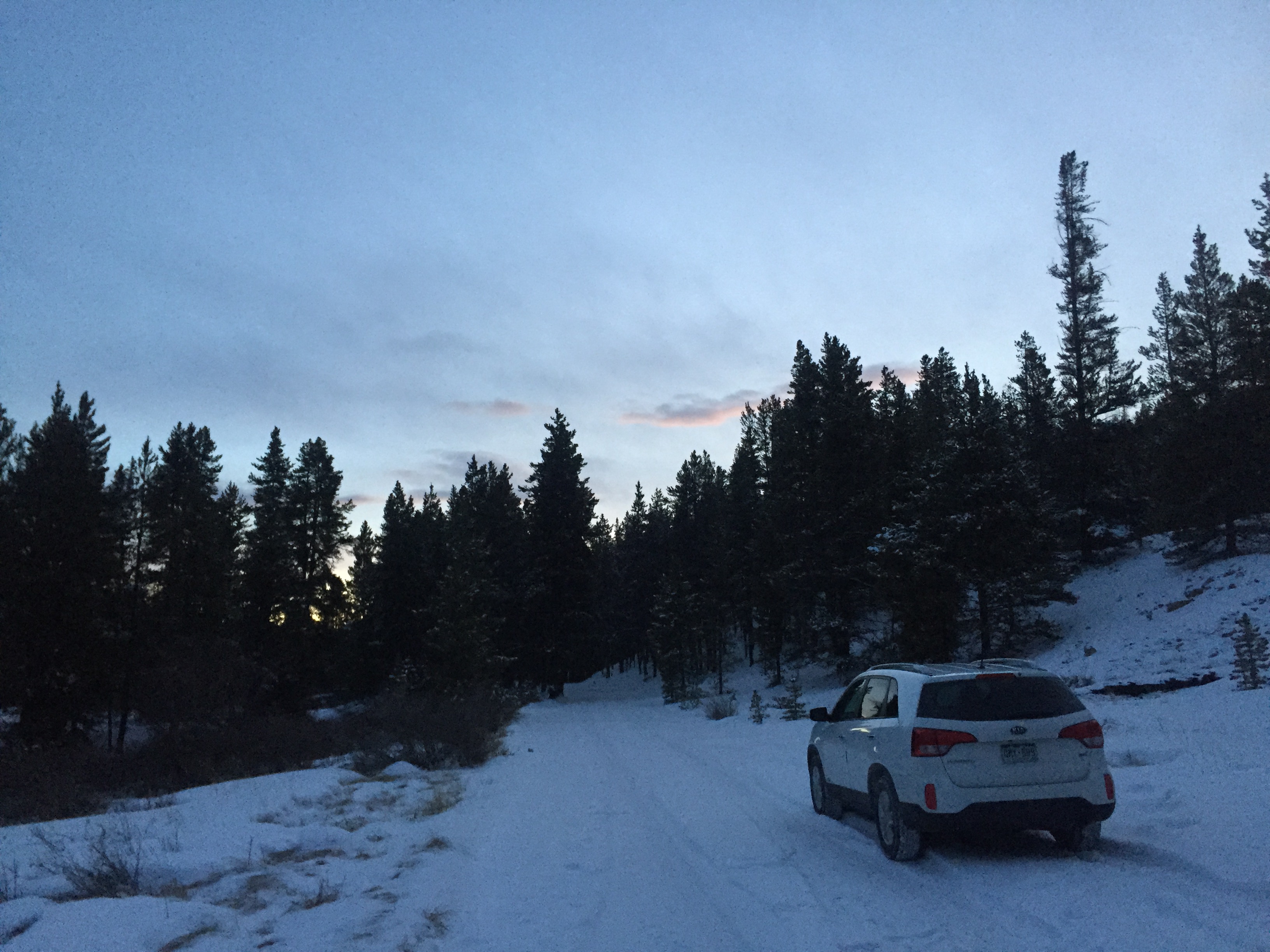 Creating my own trailhead.

Heading up North Halfmoon road the fresh snow from over a foot the past several days kept the road nice and covered. Fortunately tracks from a few cars from the day before allowed me to get an extra mile or so before I safely turned my car around near a USGS gauge station on the creek and parked along the abandoned road at about 9700′.  I was still almost 6 miles from the summer trailhead for North Halfmoon creek which is the way you climb Massive in the summer.  I would need to slog up the road first and then up the Southwest route to have a chance. 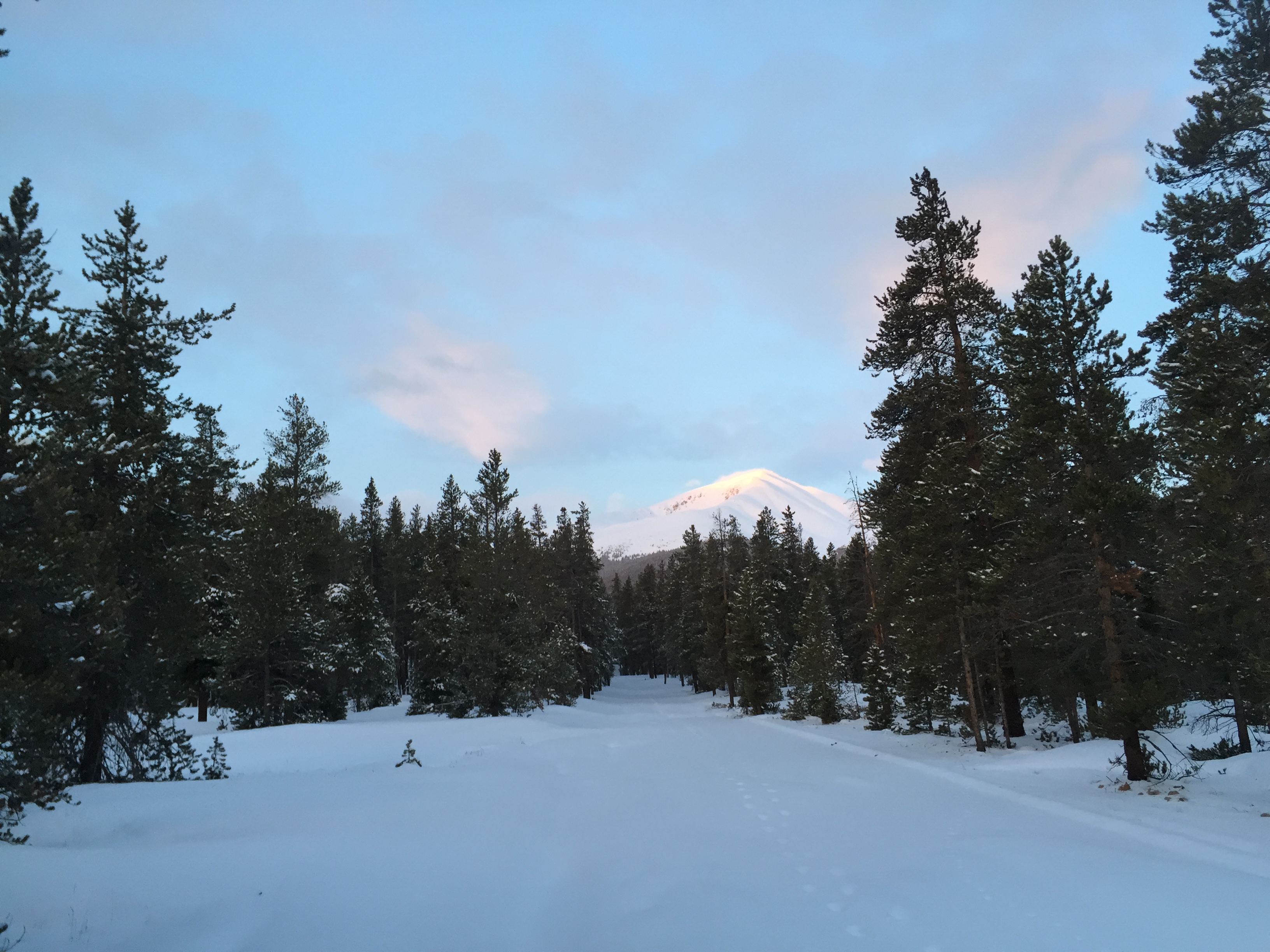 I began my journey up the road making fresh tracks in a little bit of powder- playing songs in my head and enjoying the sunrise light show with a sky that was already starting to cloud up.  In an hour I passed the North Mount Elbert Trailhead, the Massive Trailhead on the Colorado Trail, and I made my way into north Halfmoon drainage. 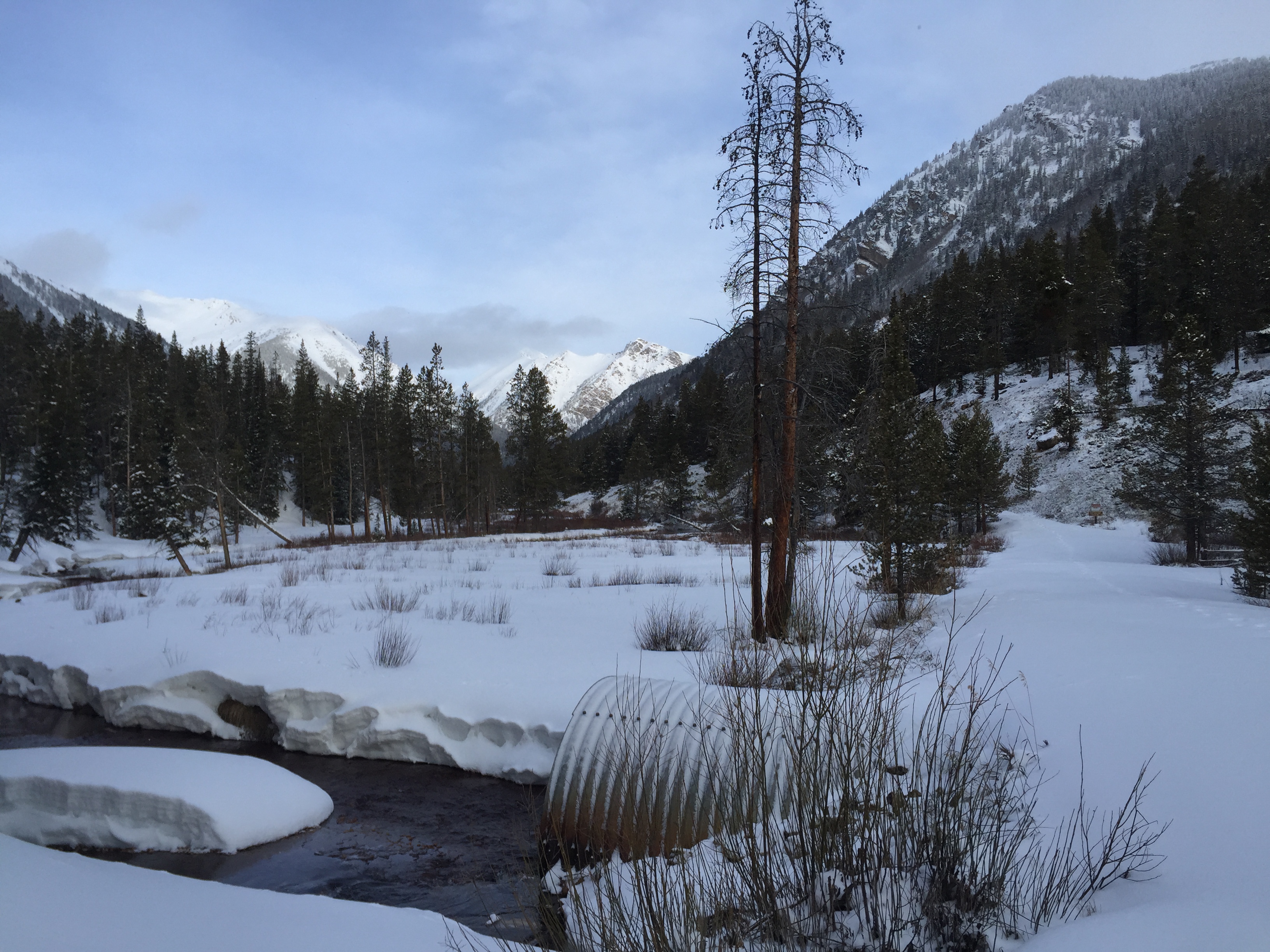 So many awesome memories of all of these different areas from this approach that I have explored over the years- including Elbert, Massive, the Colorado Trail, Casco, Lackawanna, Oklahoma, and of course Mount Massive. I recalled so many adventures with close friends, and some even all alone.  This solitude was the main reason I’ve been climbing and skiing peaks, leading expeditions, pursuing projects with my sponsors and supporters and doing what I love for so many years.  I am so very fortunate I get to do this for a living -I’m not merely a weekend warrior, but I get to make my living as a professional outdoor adventure athlete, writer, skier, keynote speaker, and reap the benefits of everything that comes with it.  Nobody can take that away from me.  I’ve been paying my dues for well over 2 decades now- hundreds and even thousands of days in the mountains and working hard on my crafts. I love Inspiring others to also pursue their passions in life, no matter what those are, anything is possible. I don’t have to work a 9 to 5 job, and I certainly don’t have to worry about many things that a lot of us might take for granted.  I am so humbled by this and yet so grateful. I climb mountains because they truly make me feel very insignificant.  They remind me not to sweat the small stuff in life, not to get caught up in things that at the end of the day do not matter. 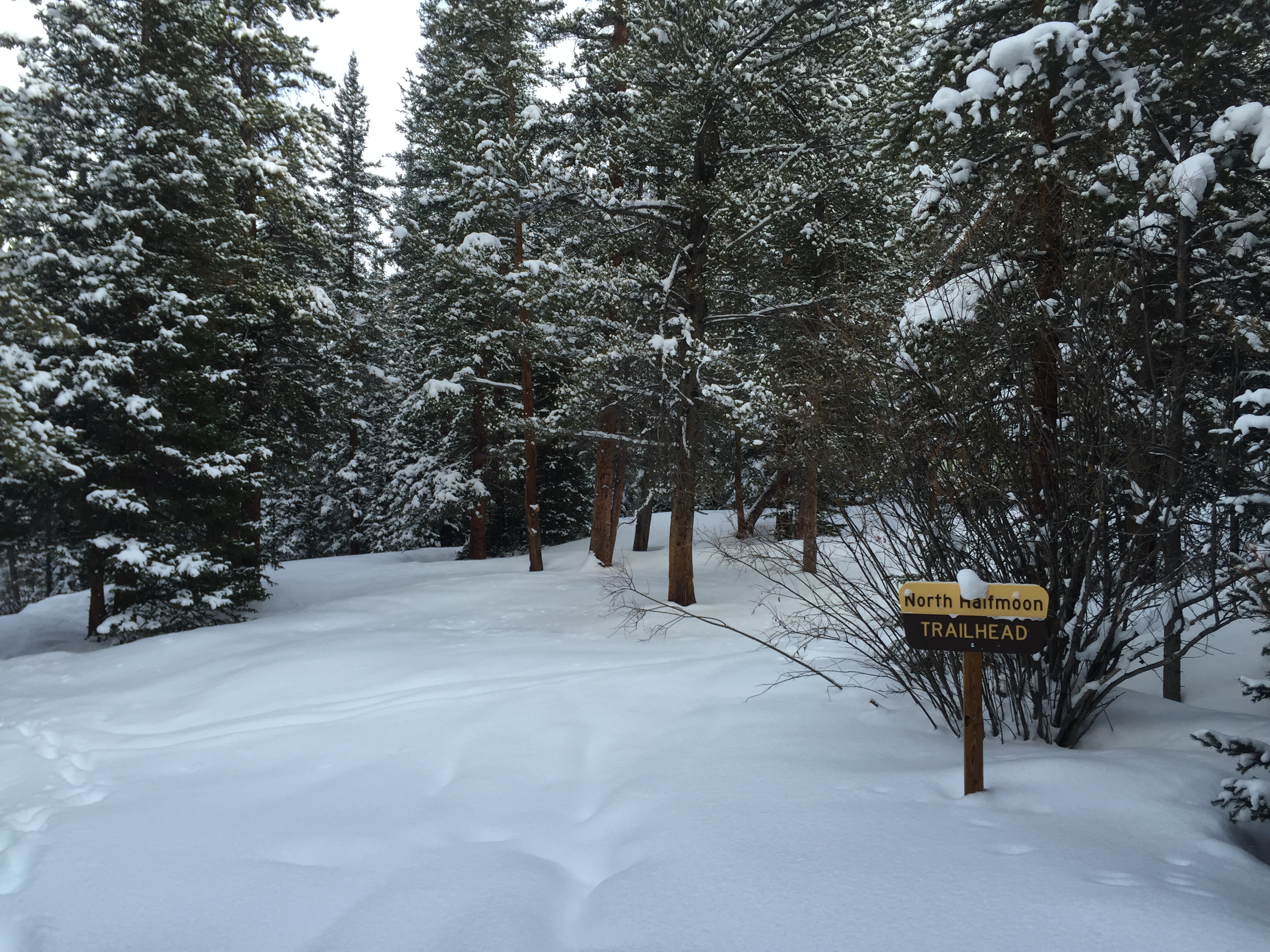 Anything is possible if you just give it your best. 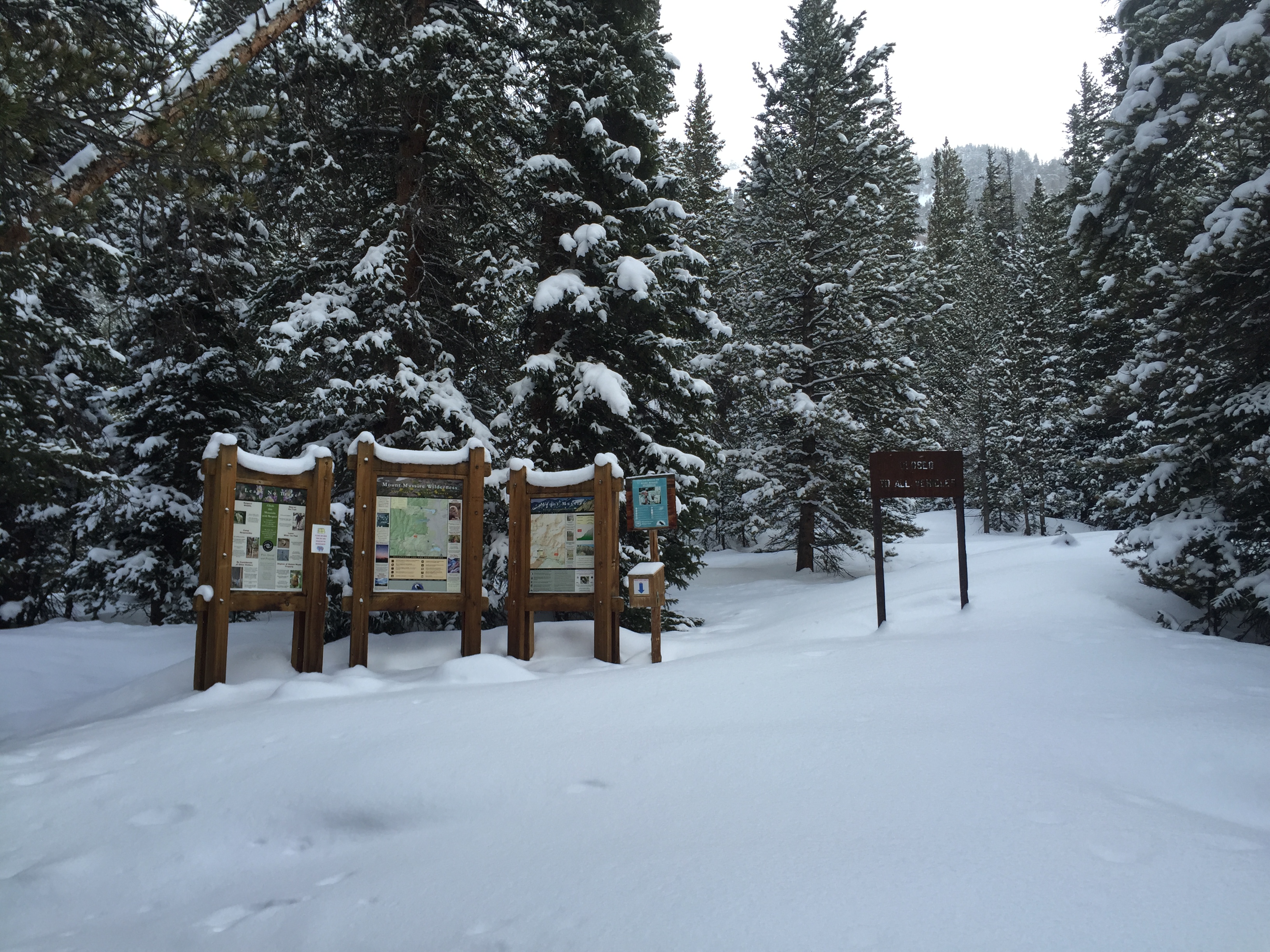 By 830 I was getting close to the summer trailhead for North Halfmoon creek. Then I got to the trailhead, passing the signs I knew I still had a long way to go, but the real fun was about to begin.  I payed my respects to the memorial to the helicopter crash from years ago. 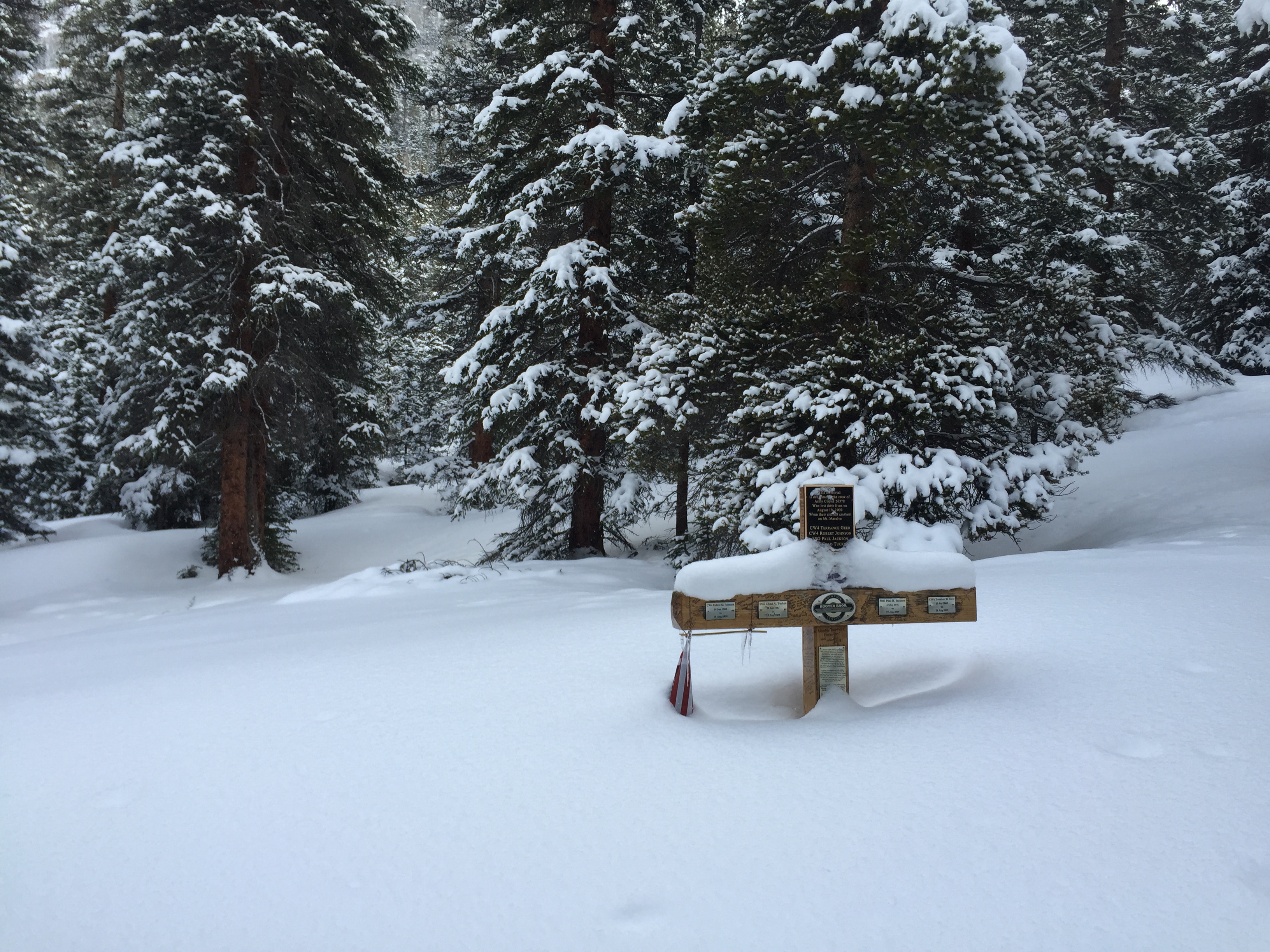 I still remember that day- I was actually up on Mount Elbert when it happened, but was unaware of the full extent of it.

In the next hour I was already at the base of the southwest face.  I found my way up the summer trail corridor and skinned to timberline.  The powder was deep and stable but I still stayed on the safest places to mitigate the risk. 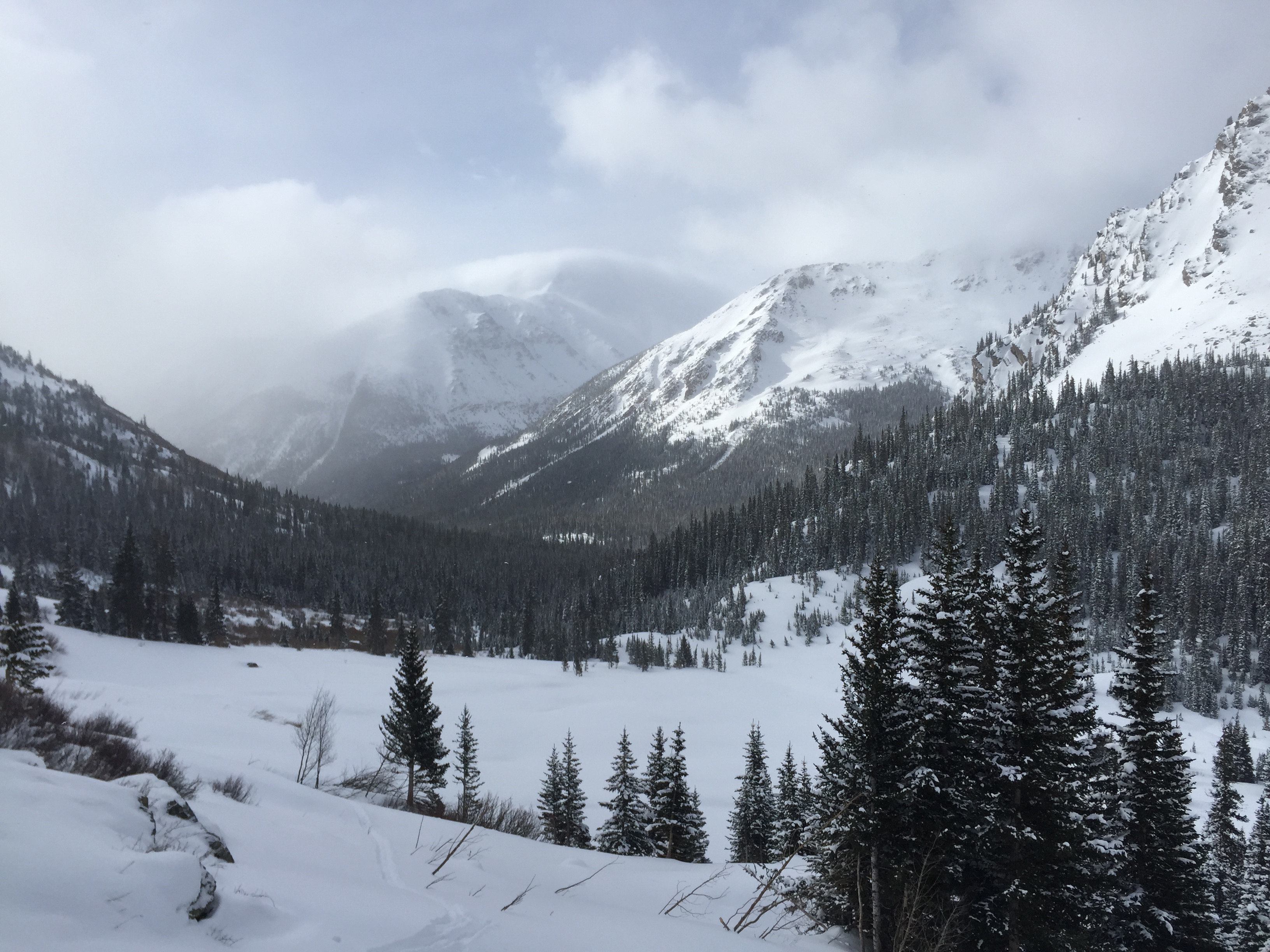 Base of the Southwest Face looking towards Elbert.

Route selection is always the most important part of skiing these peaks, preventative decision making is aways good. 12″-15″ in places allowed me to make nice skin tracks and get excited to ski! 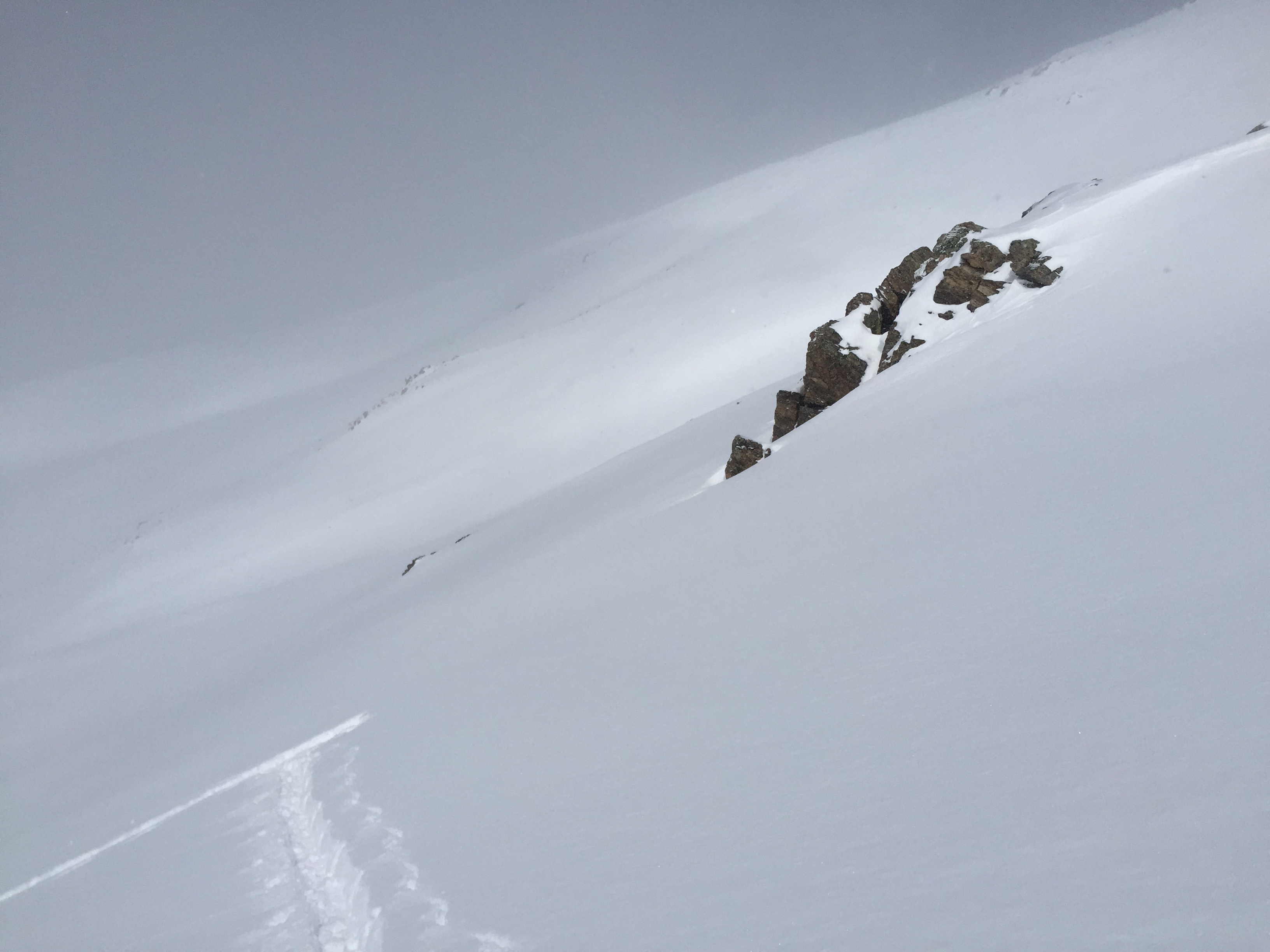 Zig Zags all up the route.

Another hour and a half passed quickly.  Elbert to my south clouded up and was now out of view. 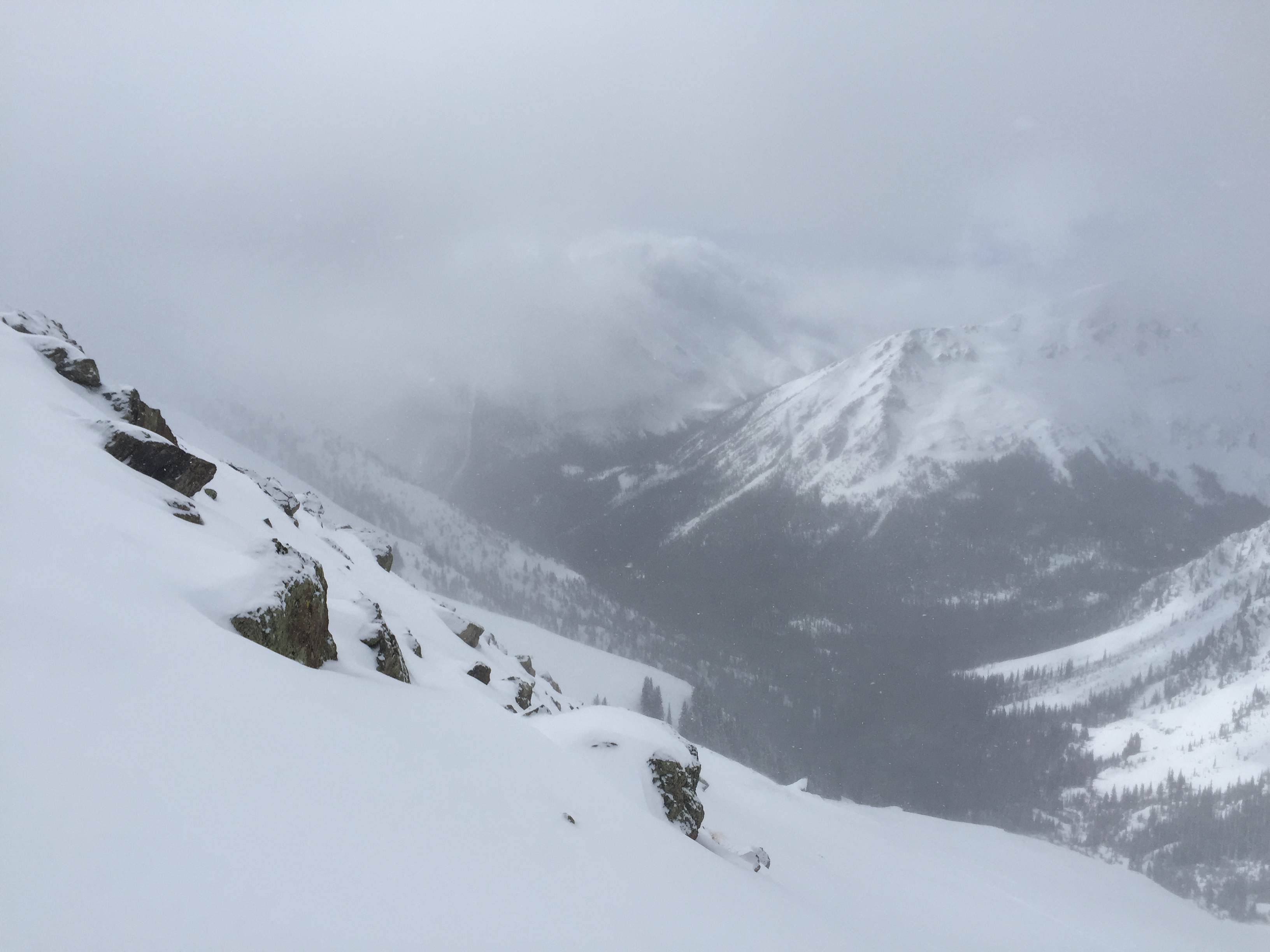 Snow flurries fell but the wind didnt get stronger than 15mph. 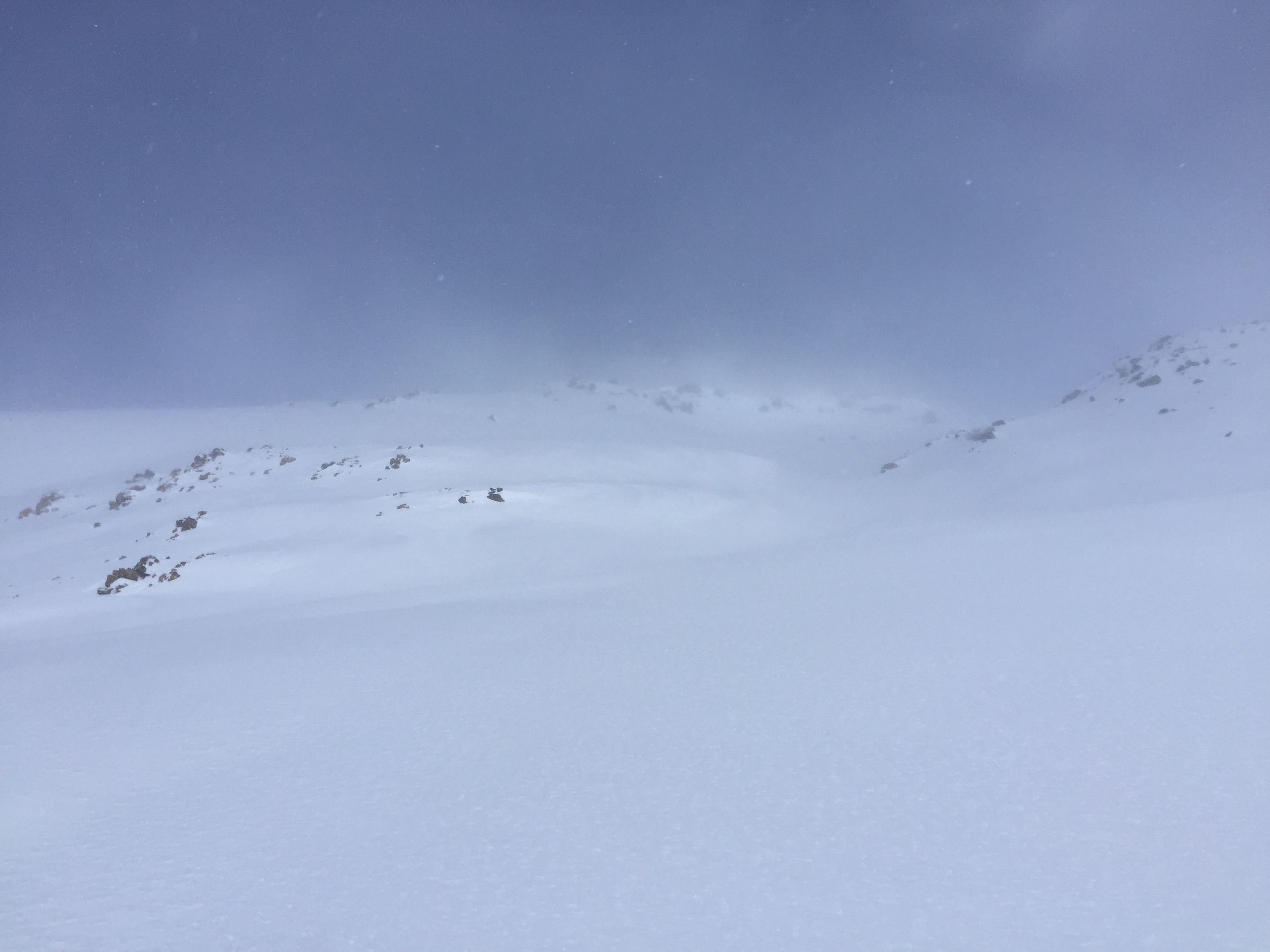 I made it to the ridge line a bit after 11am, and could see darker thicker clouds to the southeast in the valley of highway 24. 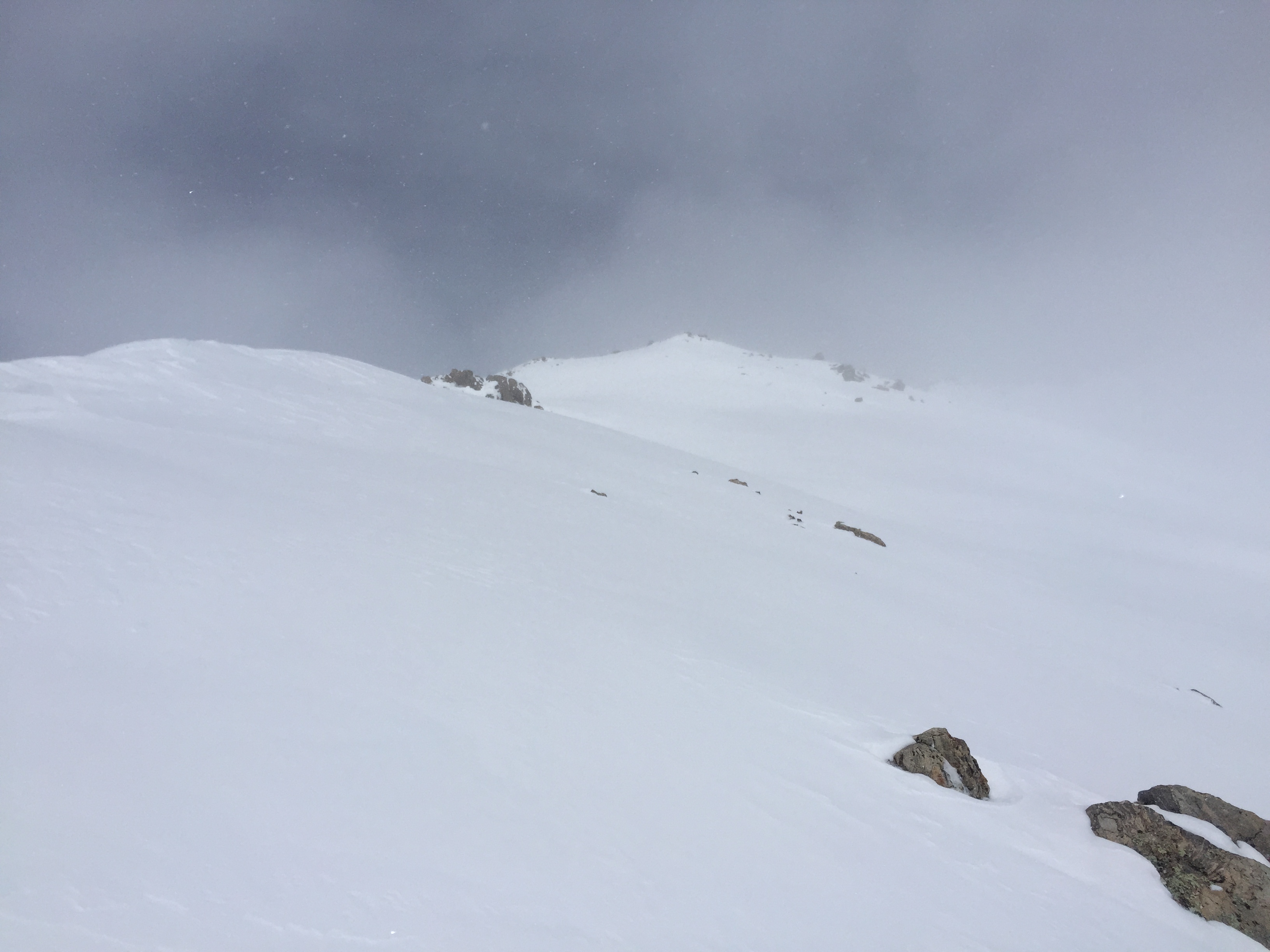 From studying weather charts and models I knew this storm system would stay south but come over the peak after noon- so I needed to hustle and make the top before I was fully engulfed by clouds. 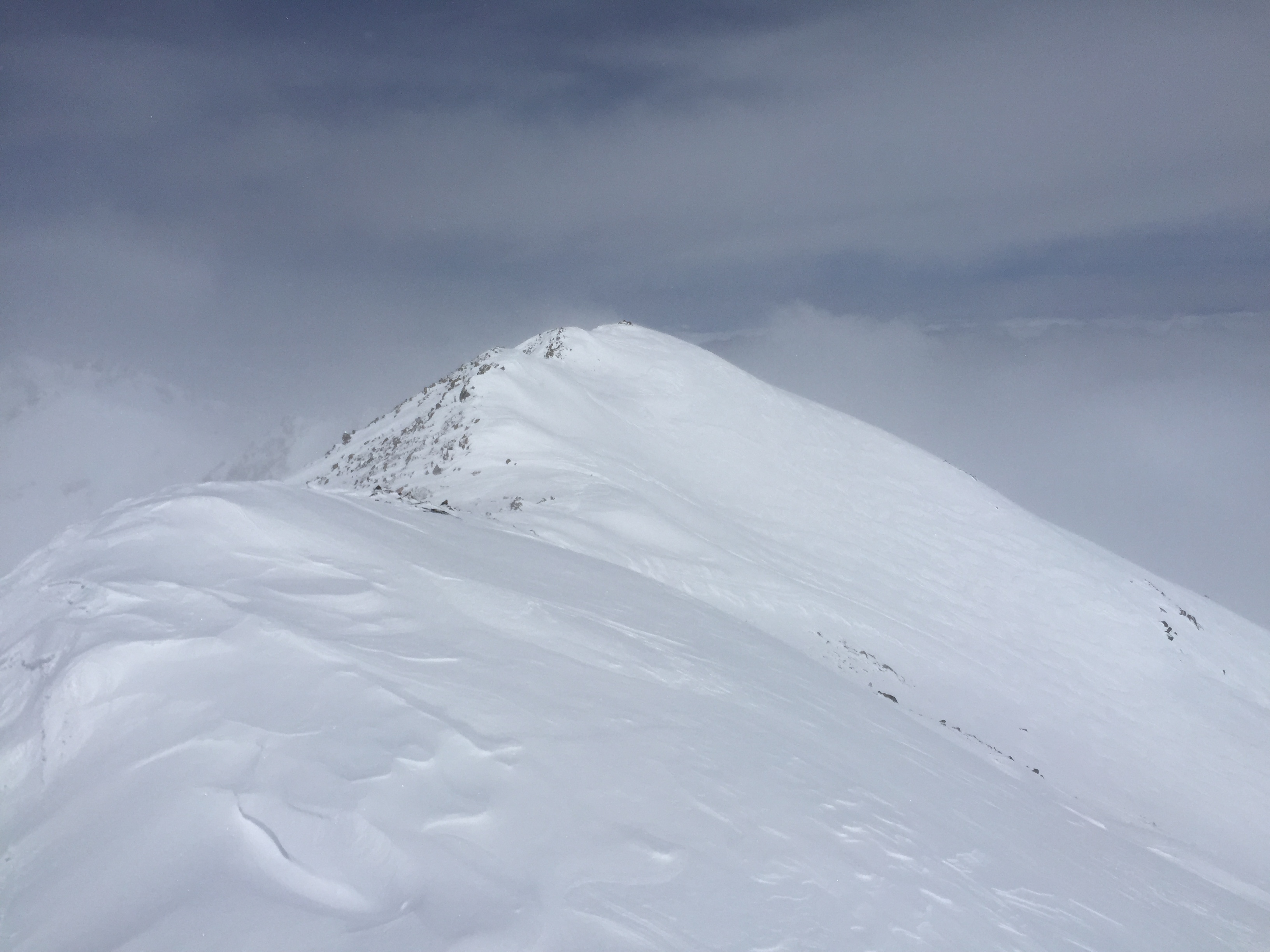 Close to the top!

As I approached the top I climbed above the clouds. The sun was warm, a reminder that May was here and that starting even earlier would need to happen in the coming days.  The snow on the ridge was deep and unconsolidated- but flat enough to be safe.  Just before noon I reached the top. 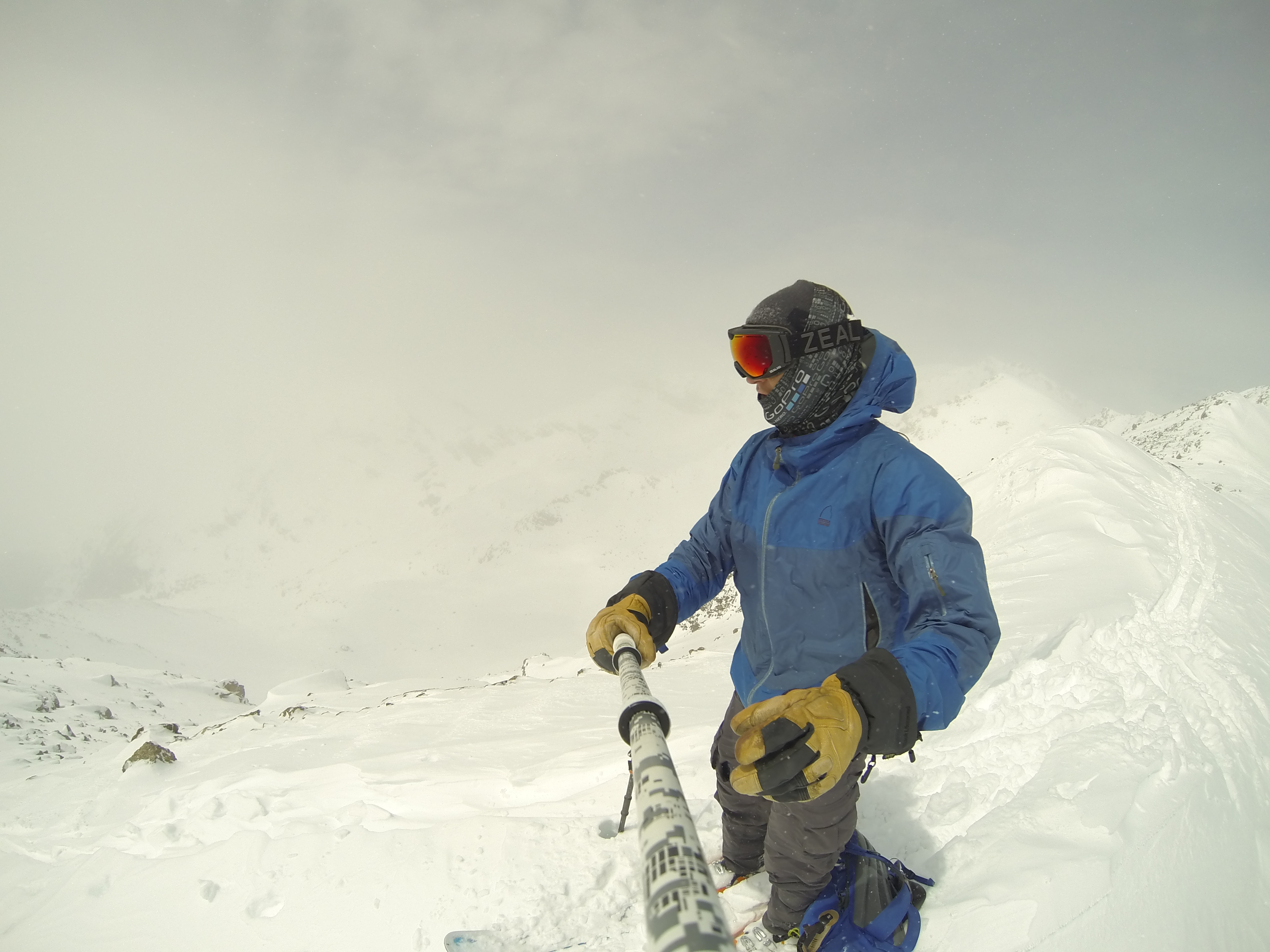 What a thrill- the sun was out, but clouds were all around me.  I was so excited to ski!  I sent a ping out from my SPOT beacon, transitioned, ate and drank and snapped a few photos and a video.  All the usual stuff I have been doing for 37 summits now.  I was getting there. 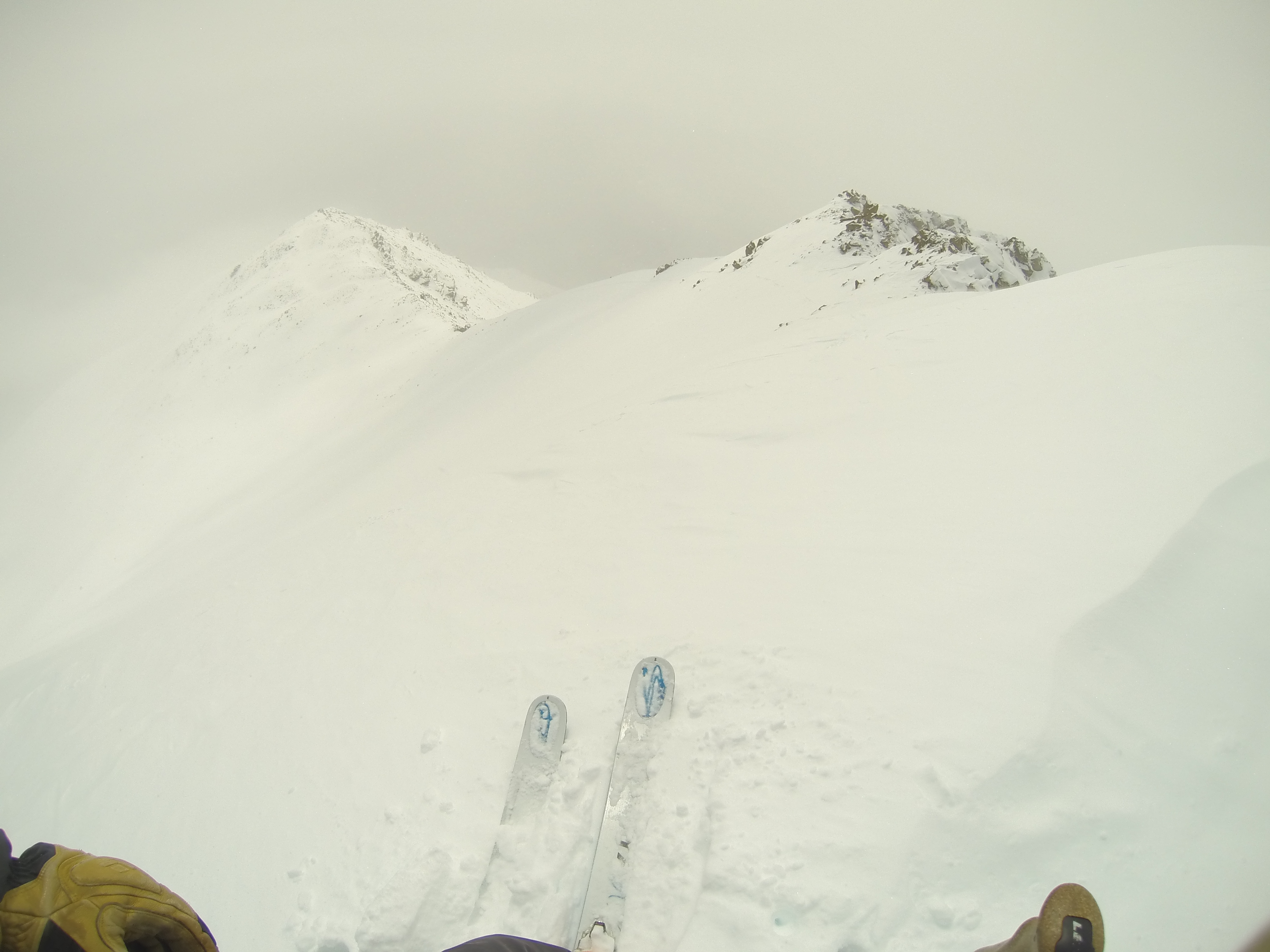 Getting ready to drop in.

More importantly it was my final peak to close out the Sawatch range. It felt like game 7 of a basketball series that I was winning.   I love the feeling of finishing off a major portion of a project. 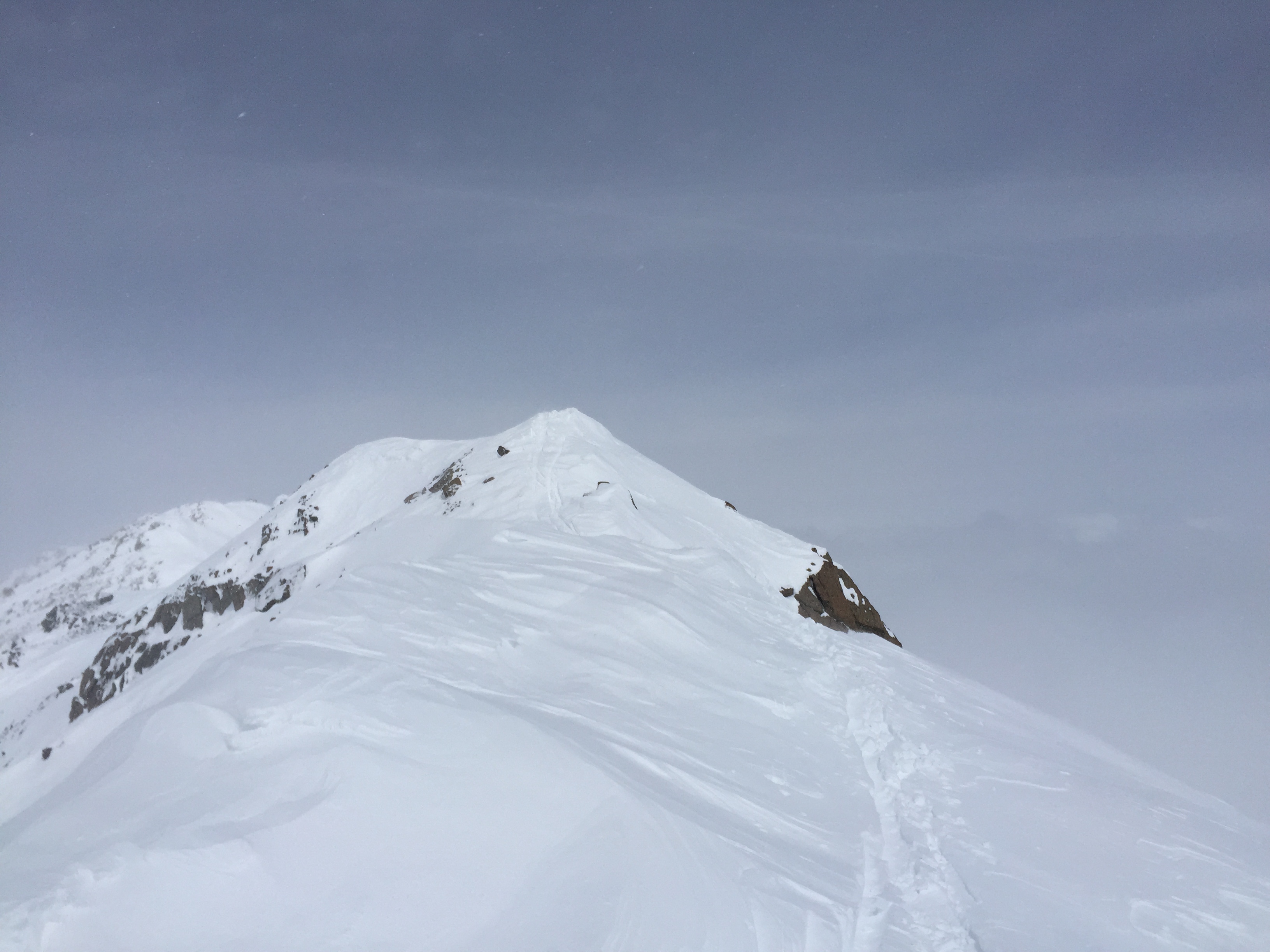 Looking back at my tracks from the top.

I was into May now, the homestretch, and through all the hard work, sweat and challenges of the past four months – I was starting to feel like I might have a chance to ski every 14er in Colorado by early June. 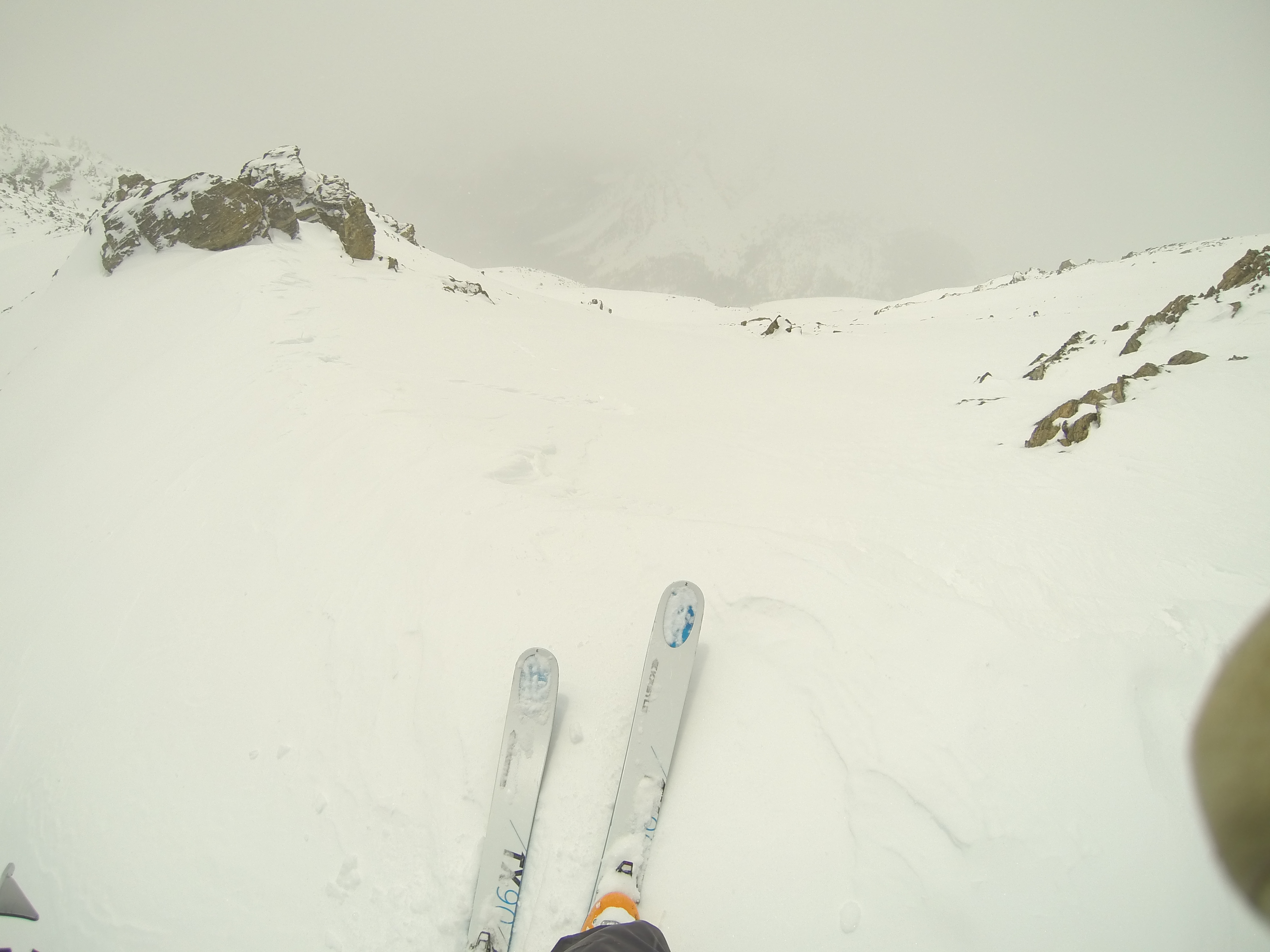 Heading down the southwest face/slopes.

Time to descend- it started snowing a bit, yet the sun was out.  I had great visibility as I skied off the ridge, back to the col and down the amazing southwest face and slopes for 3,000′ all the way to timberline. The fresh snow was exhilarating! 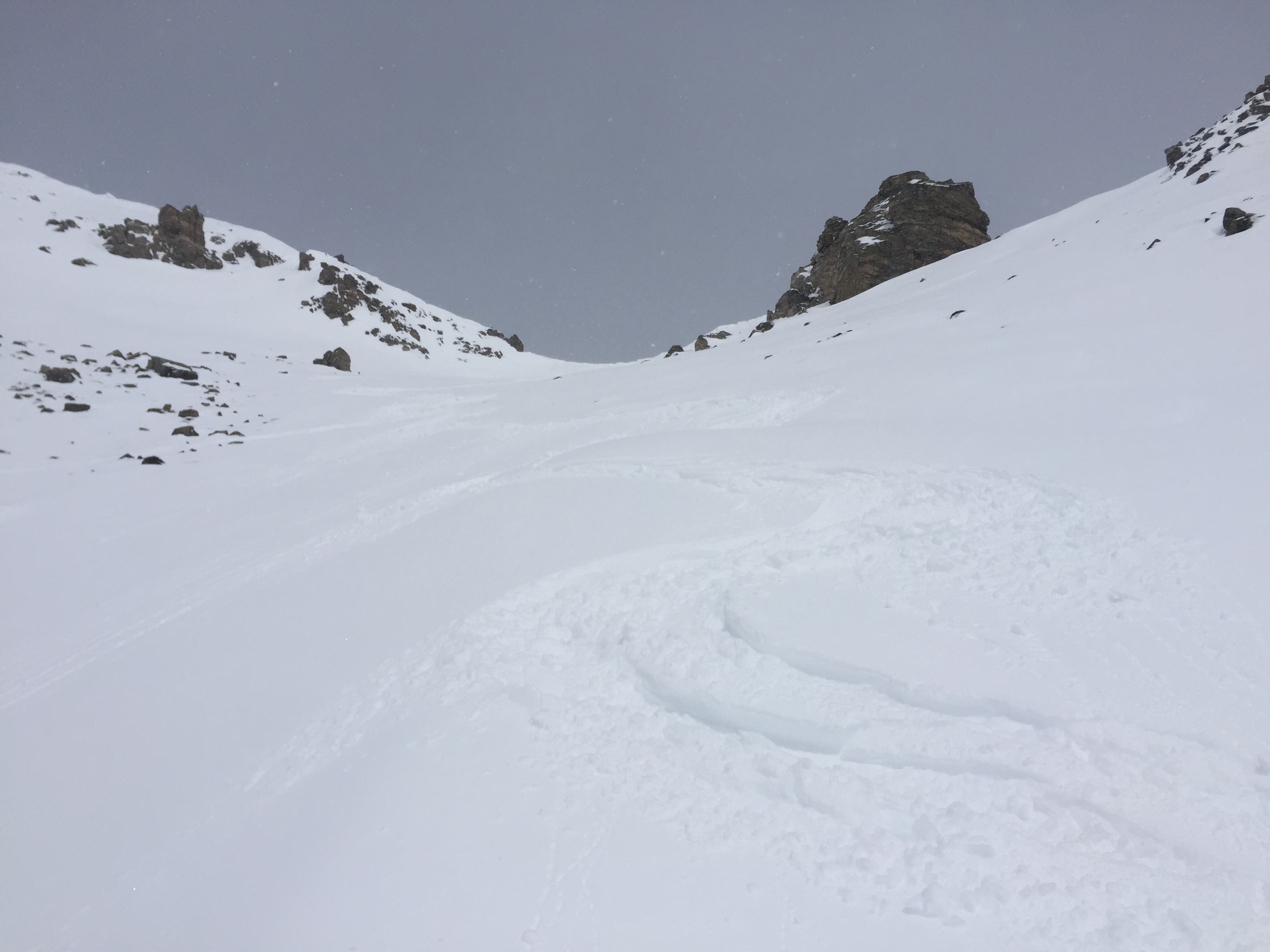 In minutes I made timberline and the sky opened up above with snow and white-out.  But I was safely in the woods and skiing or slogging (I should say) back the 6 miles to my vehicle; what a great day. 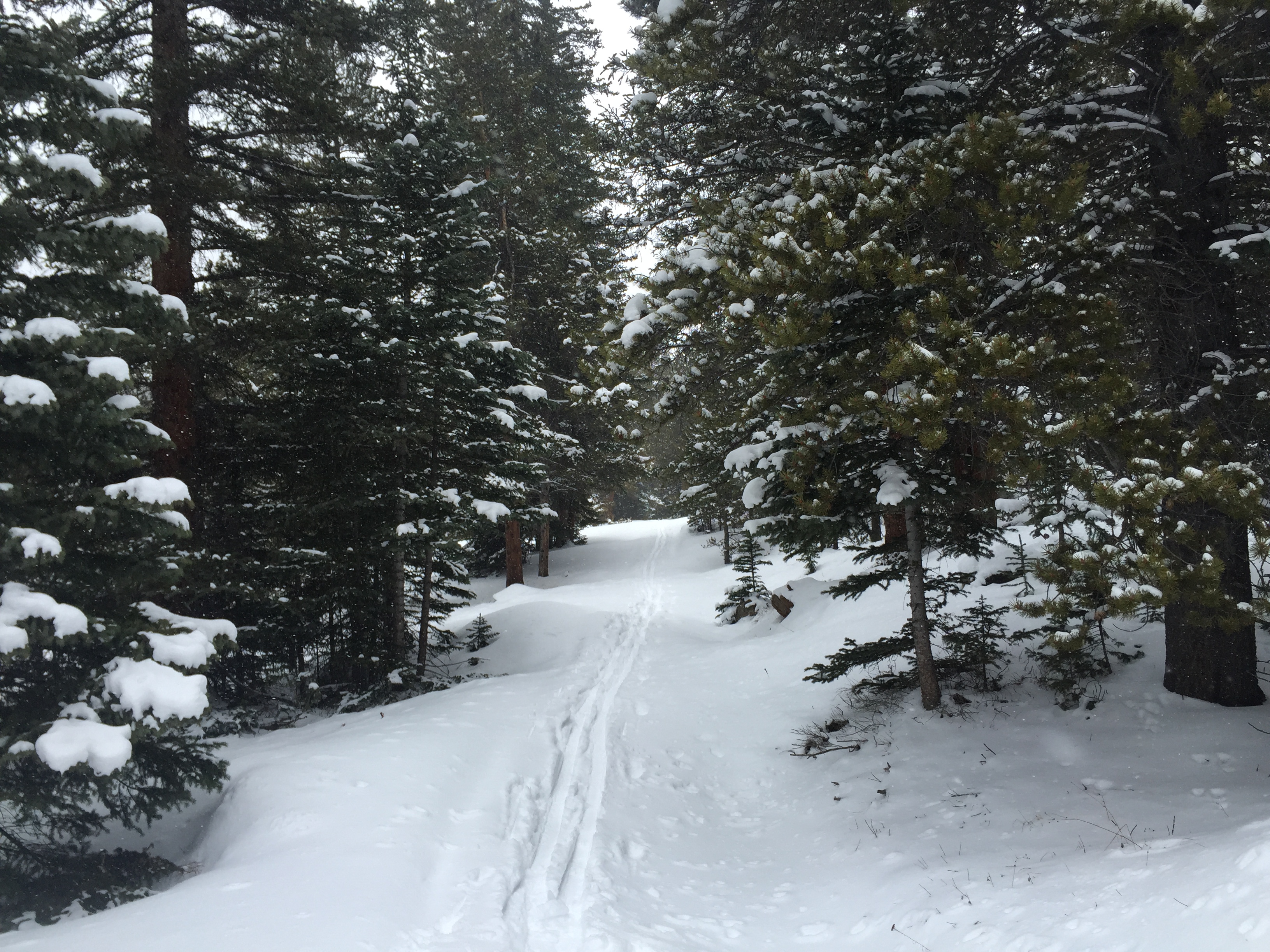 The Massive peak delivered Massive powder and Massive smiles.  The Sawatch range complete, it was time to focus on other peaks and other ranges. 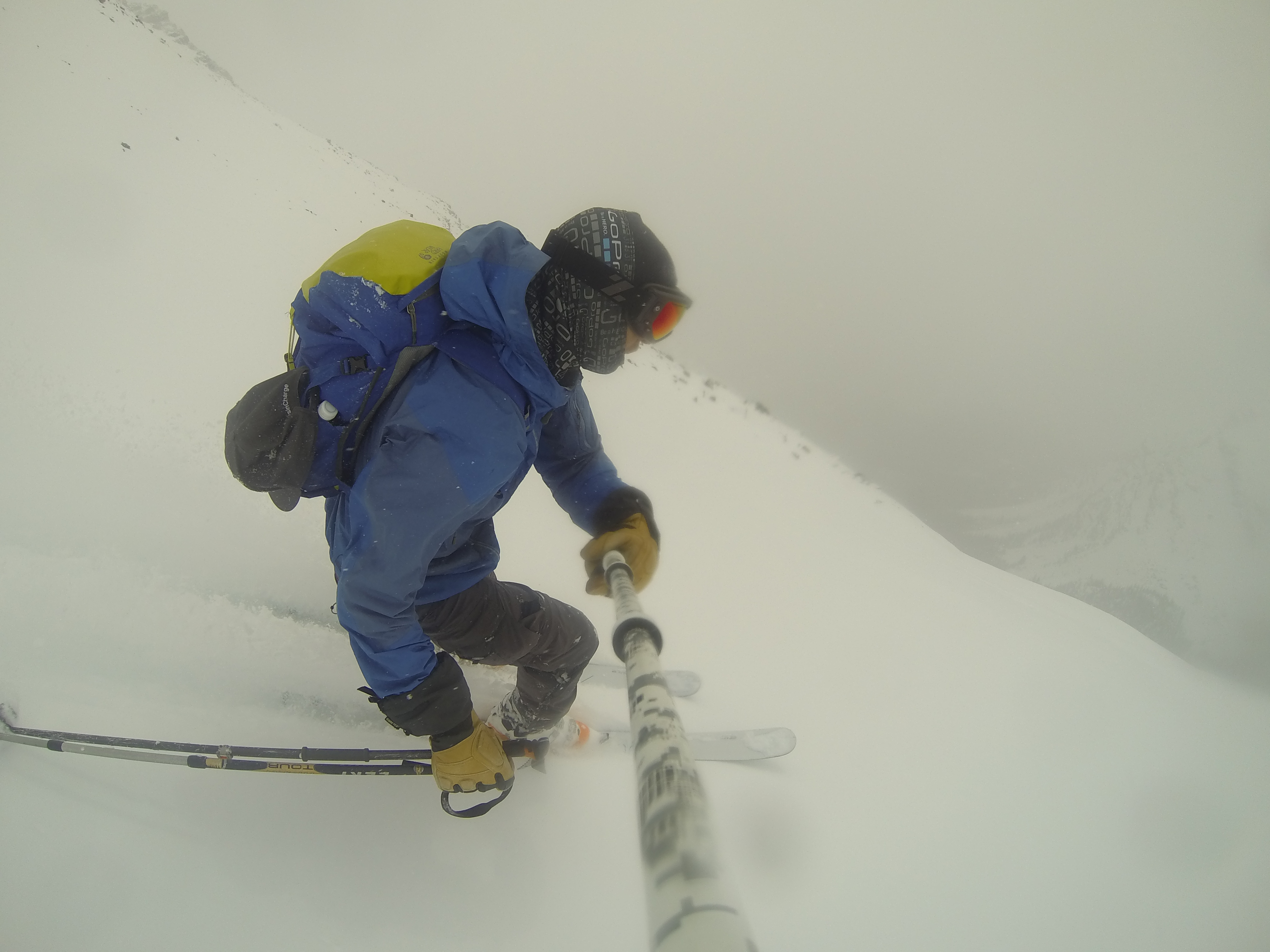