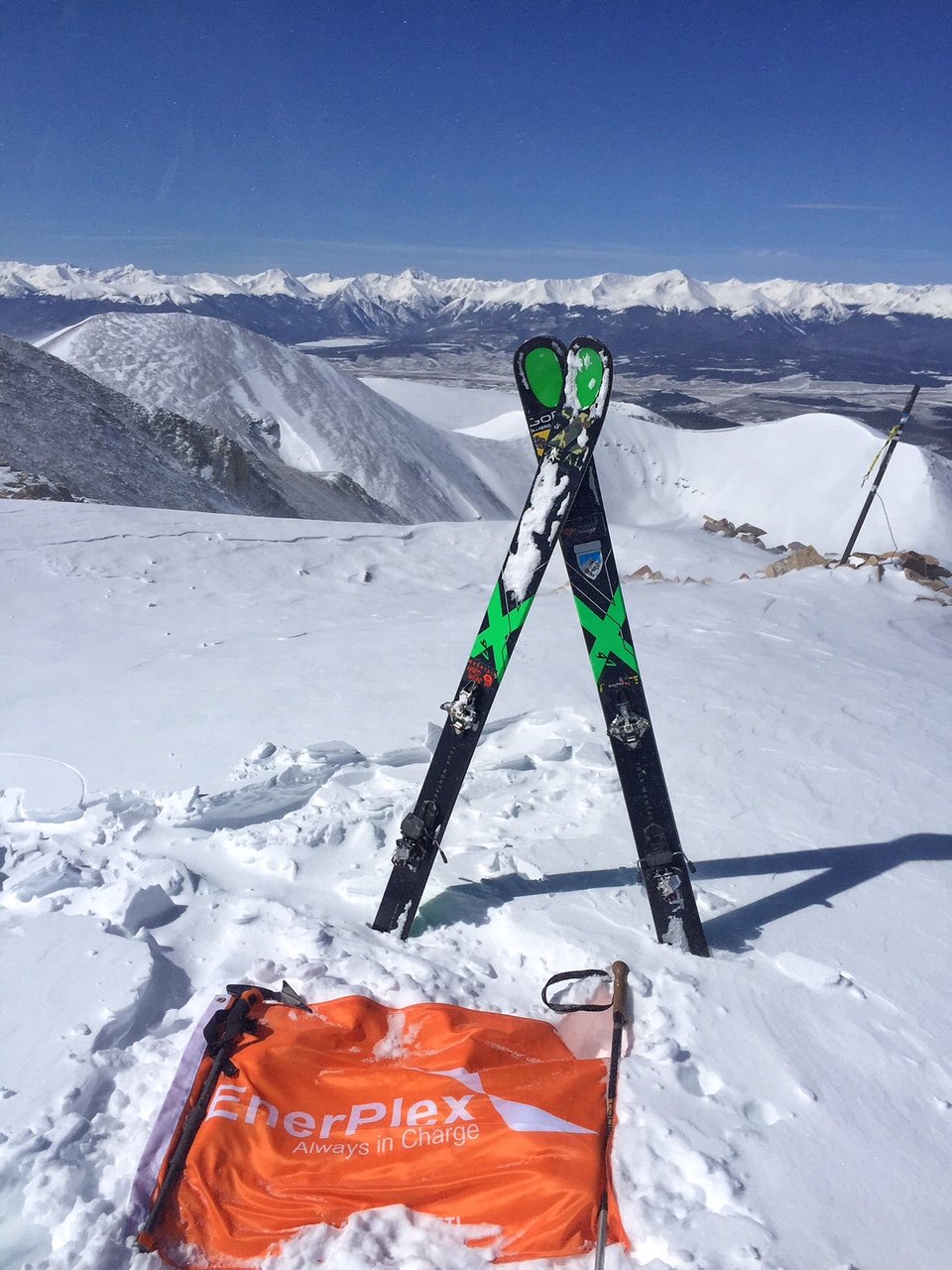 The morning at the Iowa Gulch Trailhead accessed from Leadville was one of the coldest mornings of the entire project. 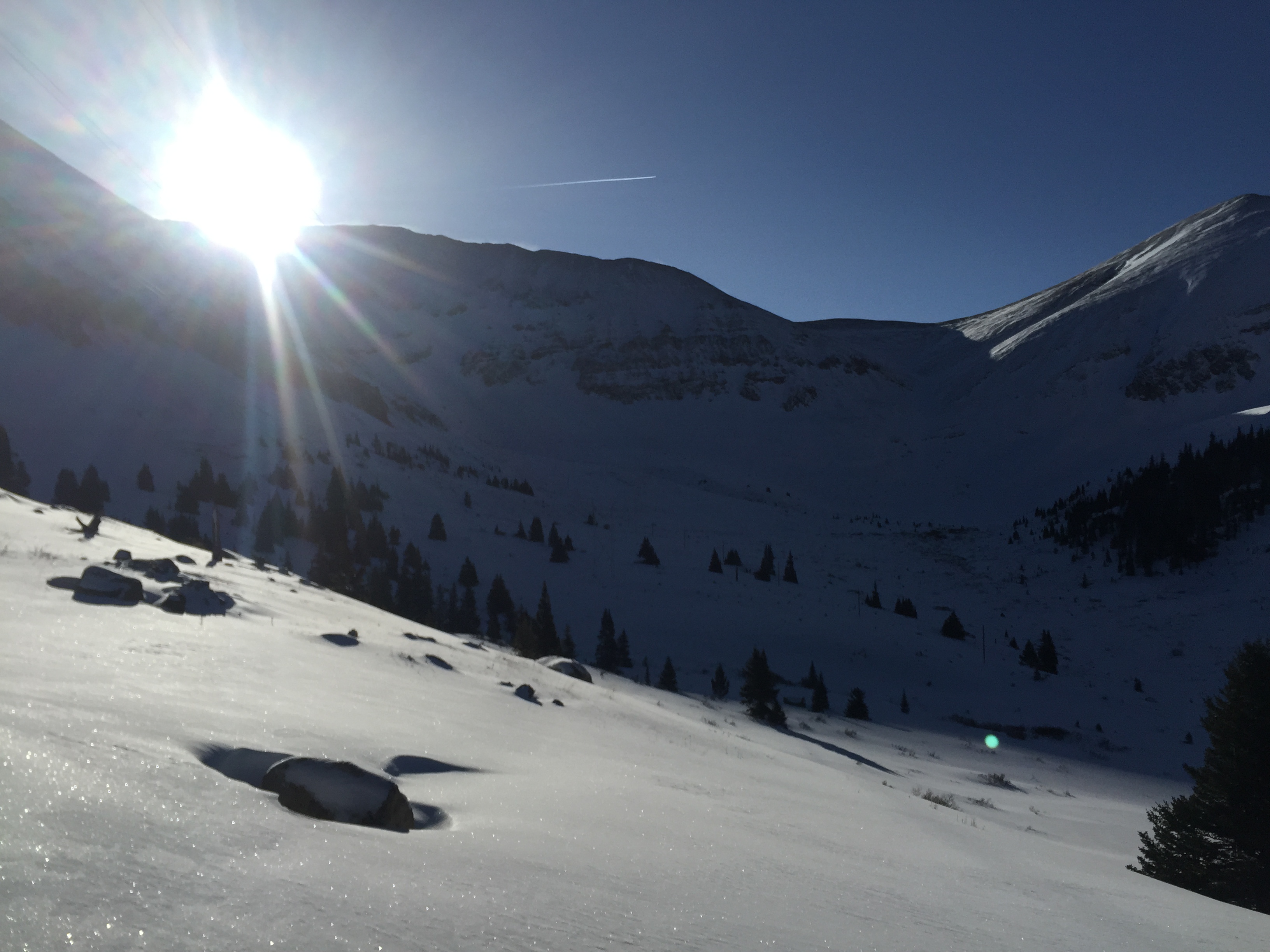 In the increasing morning lightshow my friend Roger and his friend Alex met me at the trailhead and we headed towards the peak. It was calm and gorgeous as we moved to timberline along the snowed in 4WD road in -12 temps. 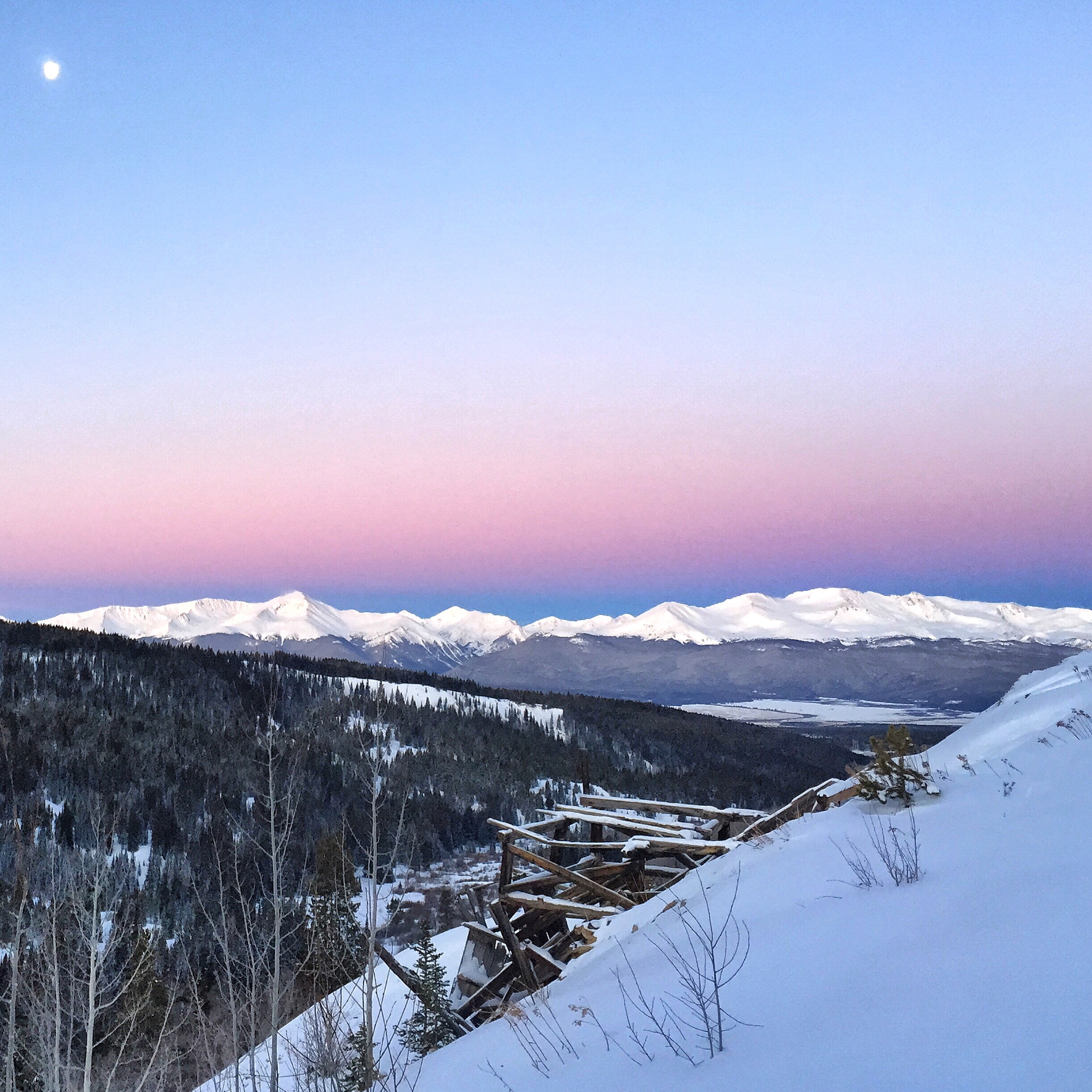 The Magical hour heading up to Sherman.

A two mile slog up the road got us into the basin below the west face of Sherman. I had skied Sherman’s west face last May, but this time it was pretty bare. 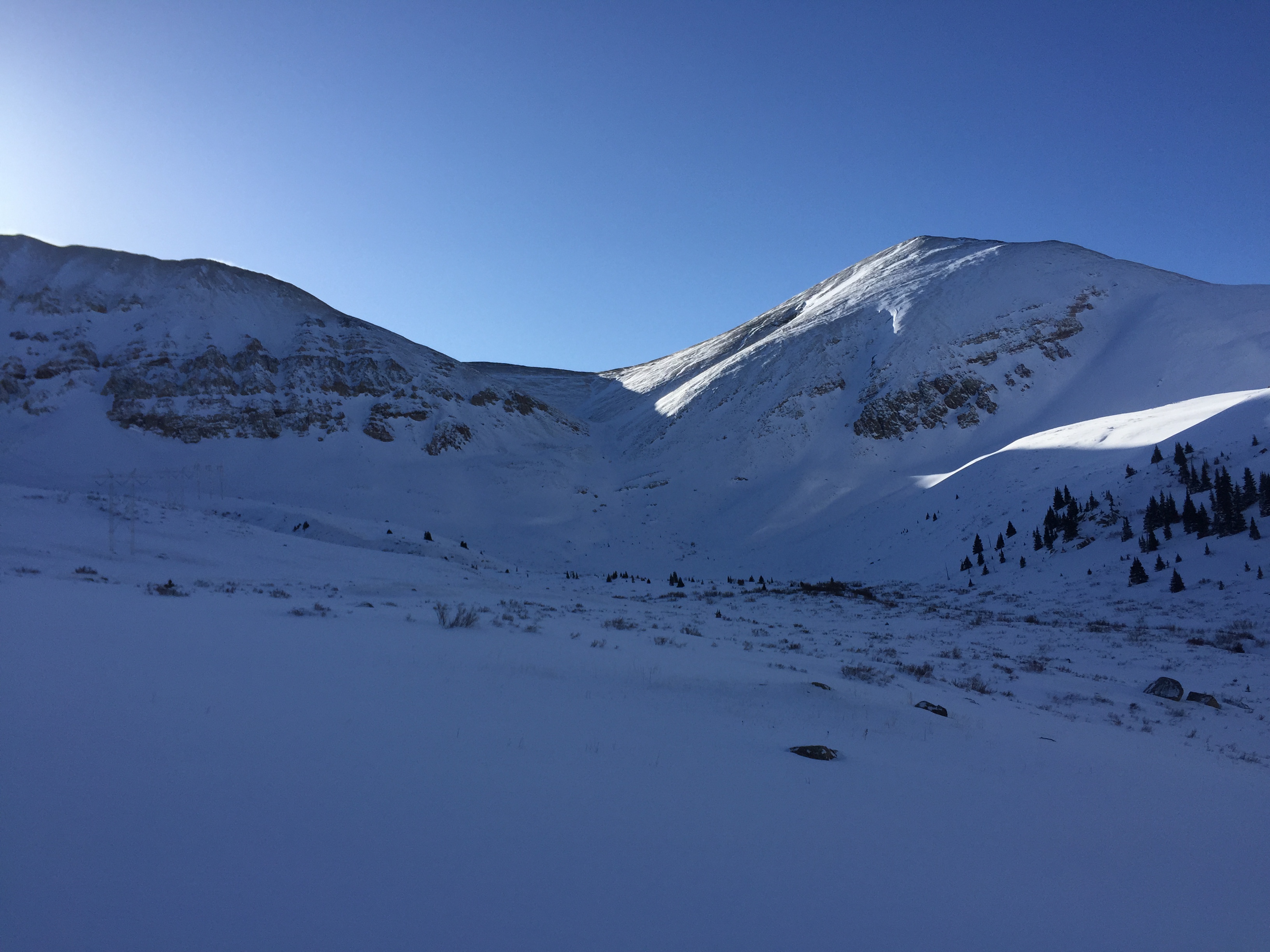 Heading up the west slopes saddle between Sherman and Sheridan.

Fortunately for the fresh snow the day before, there was a nice ribbon of snow in the gully leading to the Saddle between the 13er Sheridan (to the south) and Sherman to the north. The two peaks named for former generals in the US army from the 1800s stood side by side as we ascended into the gully. 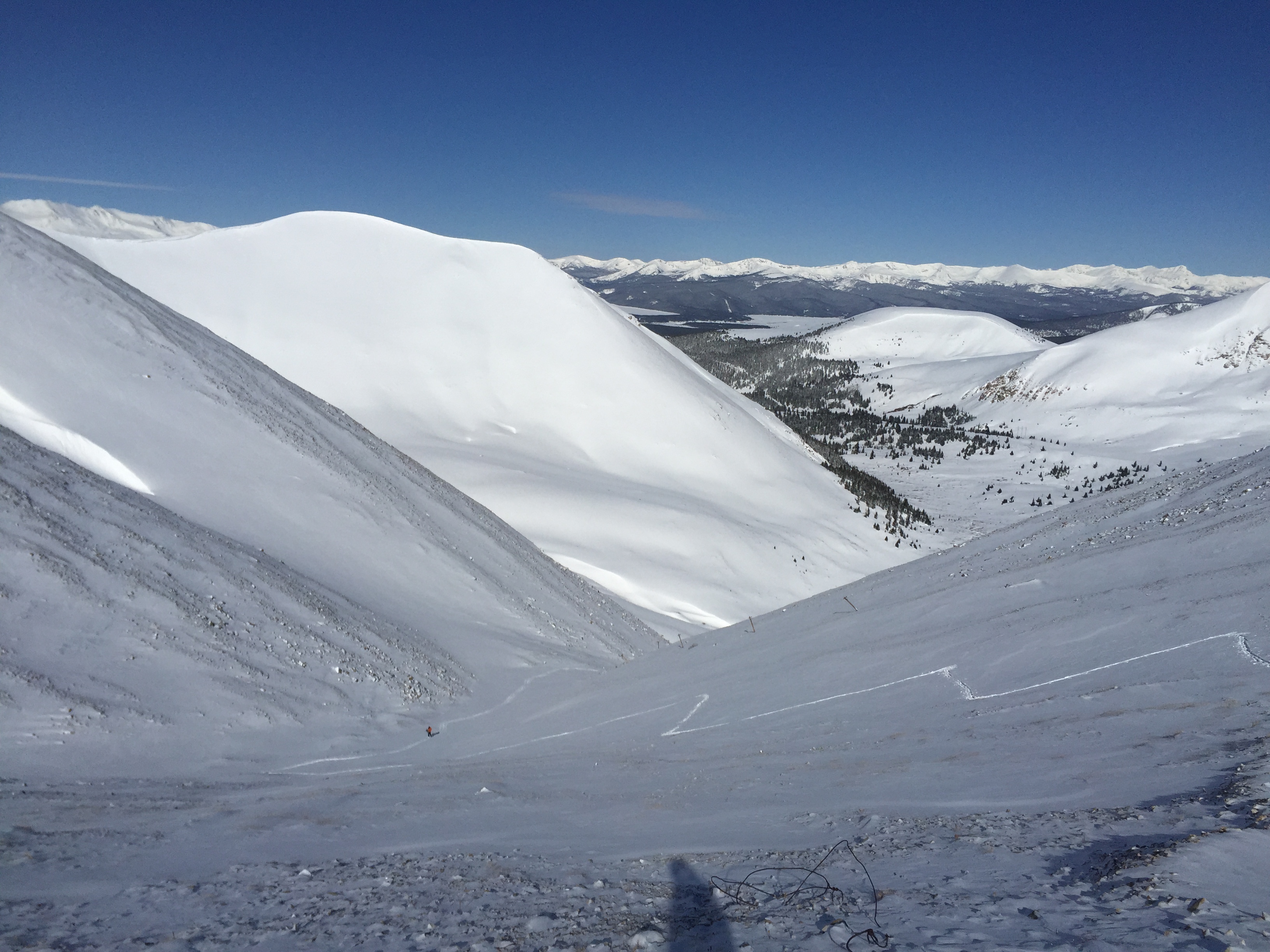 Looking back down the gully into Iowa Gulch near the saddle.

The fresh snow gave the peak a nice touch, and we were soon on the saddle between the two peaks heading up Sherman’s Southwest Ridge. 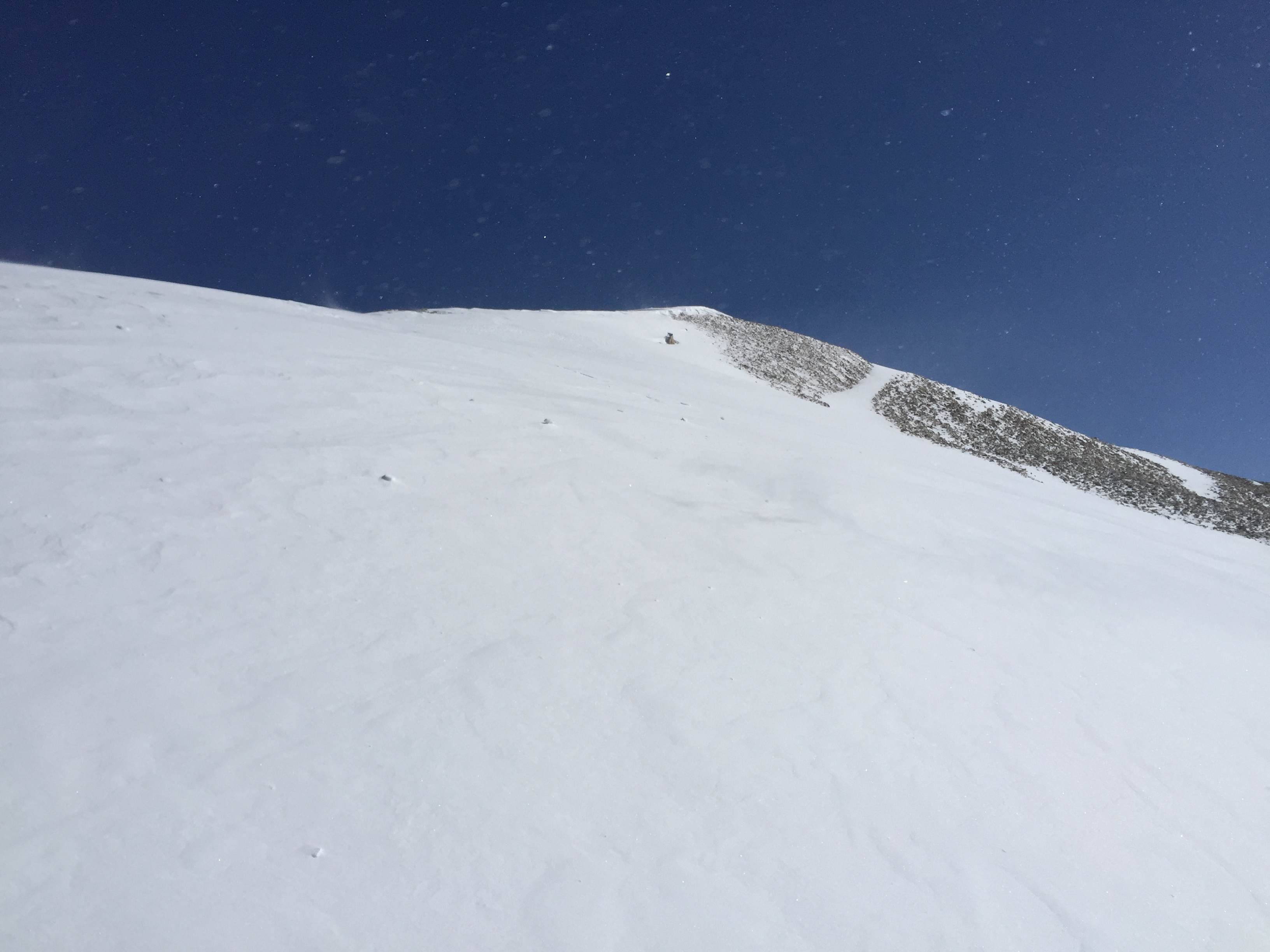 The winds began to pick up above 13,500’ so I kicked it into high gear, cresting the summit ridge and reaching the summit. 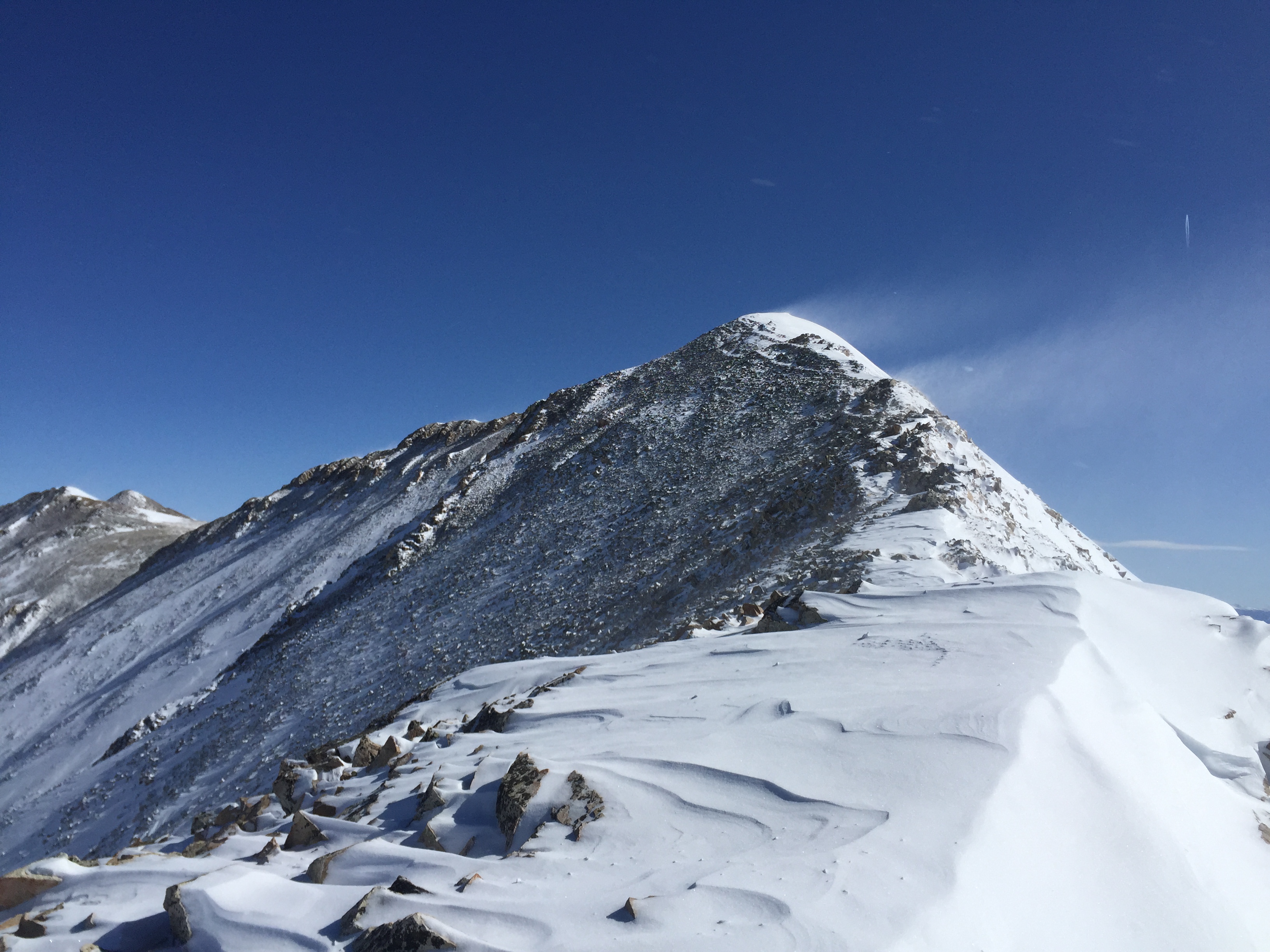 Plume near the summit on the Southwest ridge.

Roger had turned back briefly to check on Alex, and once he had confirmed Alex had safely descended back in to the valley, Roger came up to the summit to meet me. 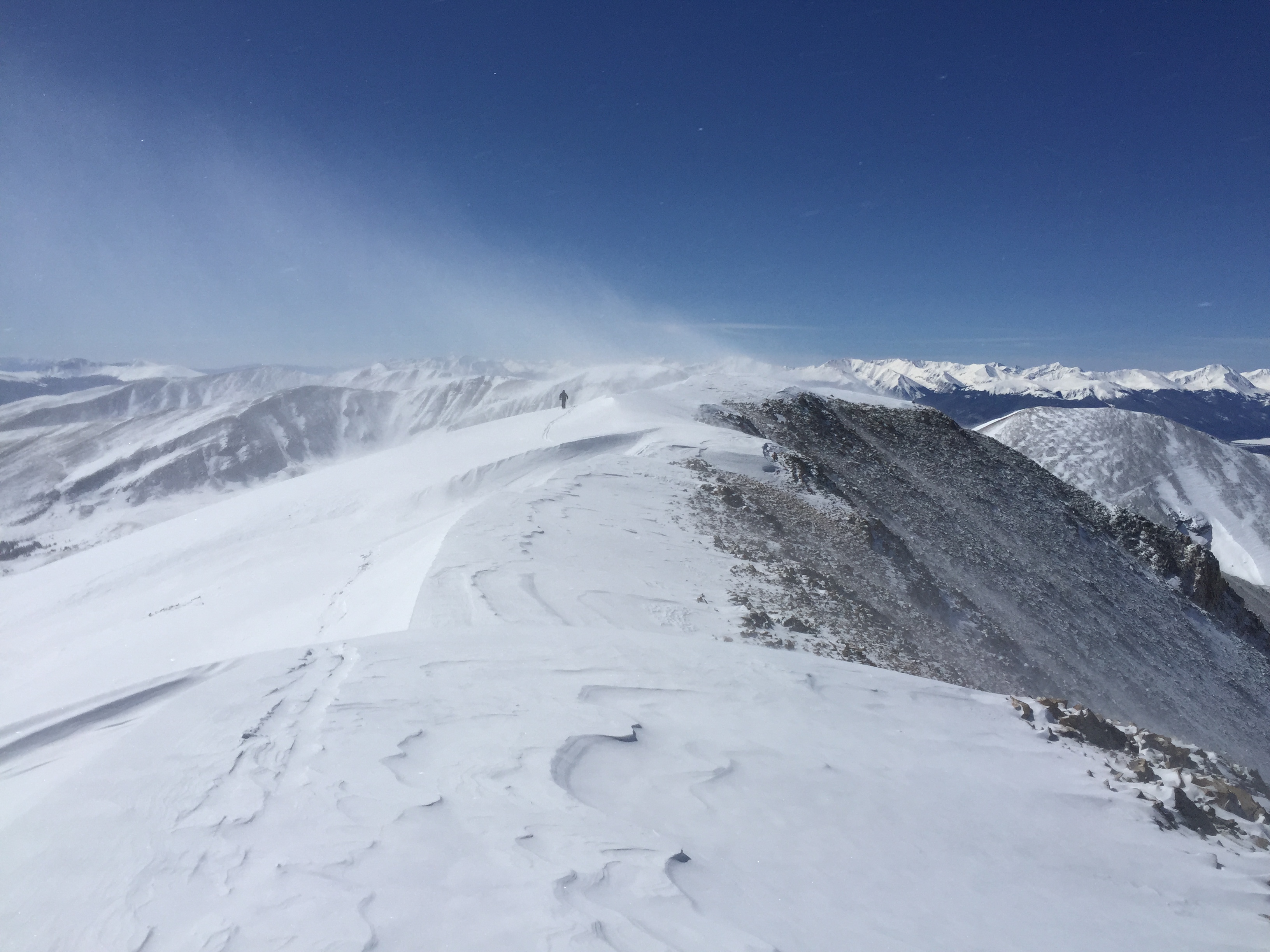 Roger arriving to the summit.

I was able to wait on top for 45 minutes or some in the morning sunshine on the leeward side of the peak in relative comfort. 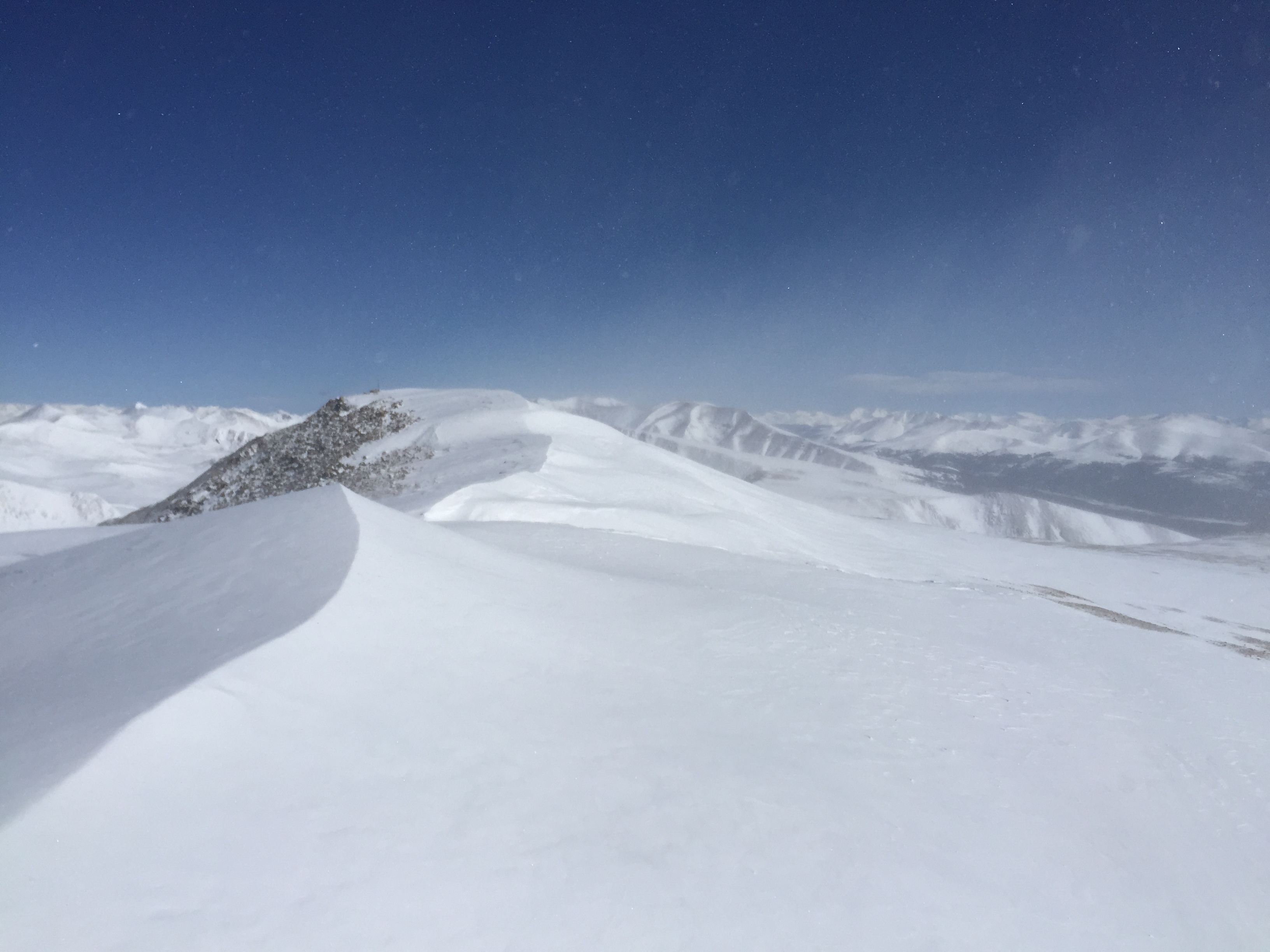 Cool looking snow drifts along the summit. Winds picked up more once we headed down.

Awesome views from the Summit.

The new powder had made some huge drifts, so after some photos, Roger and I dropped into the southeast and south face of Sherman towards the 4-mile Drainage and the Hilltop Mine. 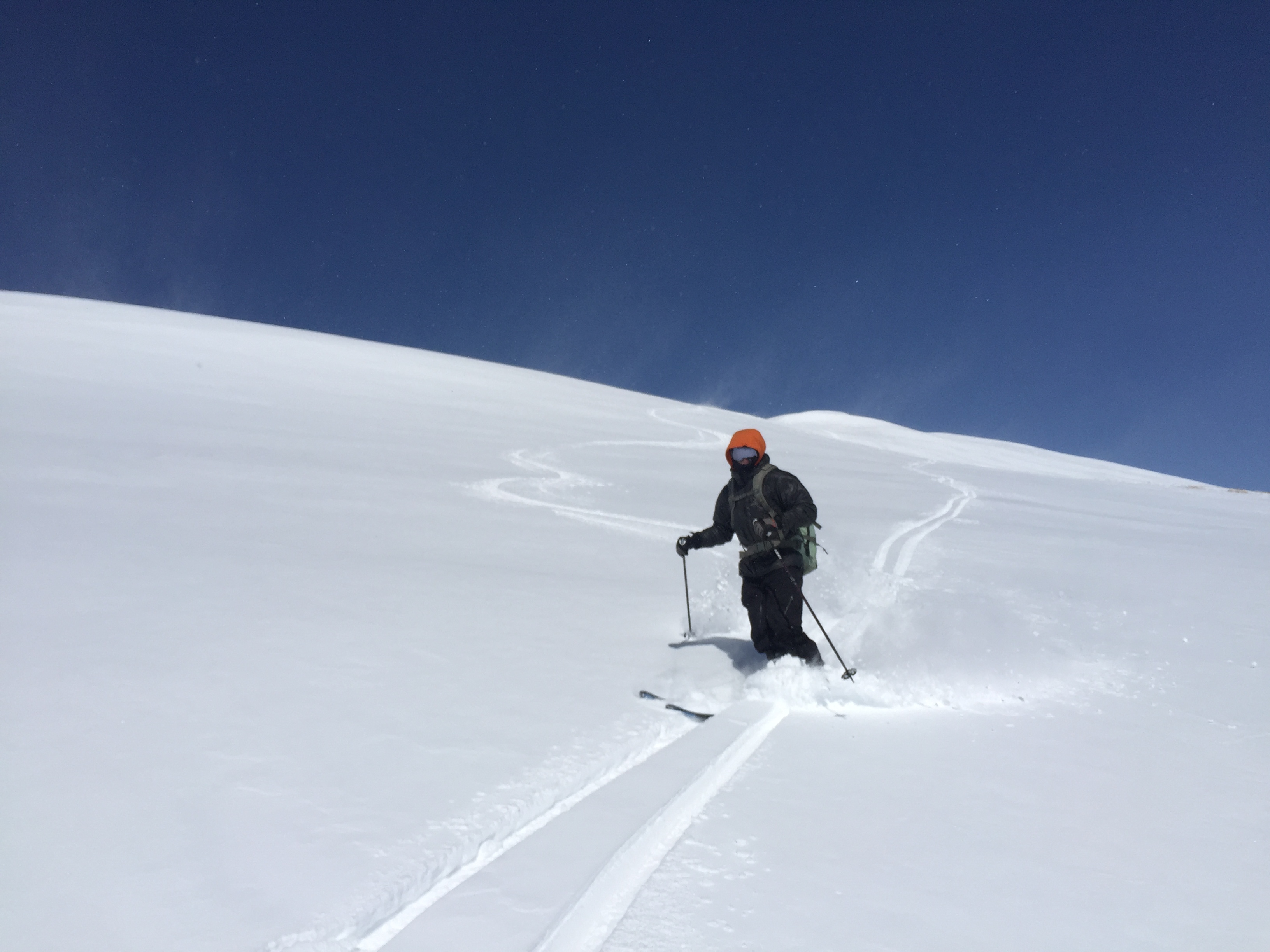 The snow here was excellent powder and we skied almost 1000’ into the basin. 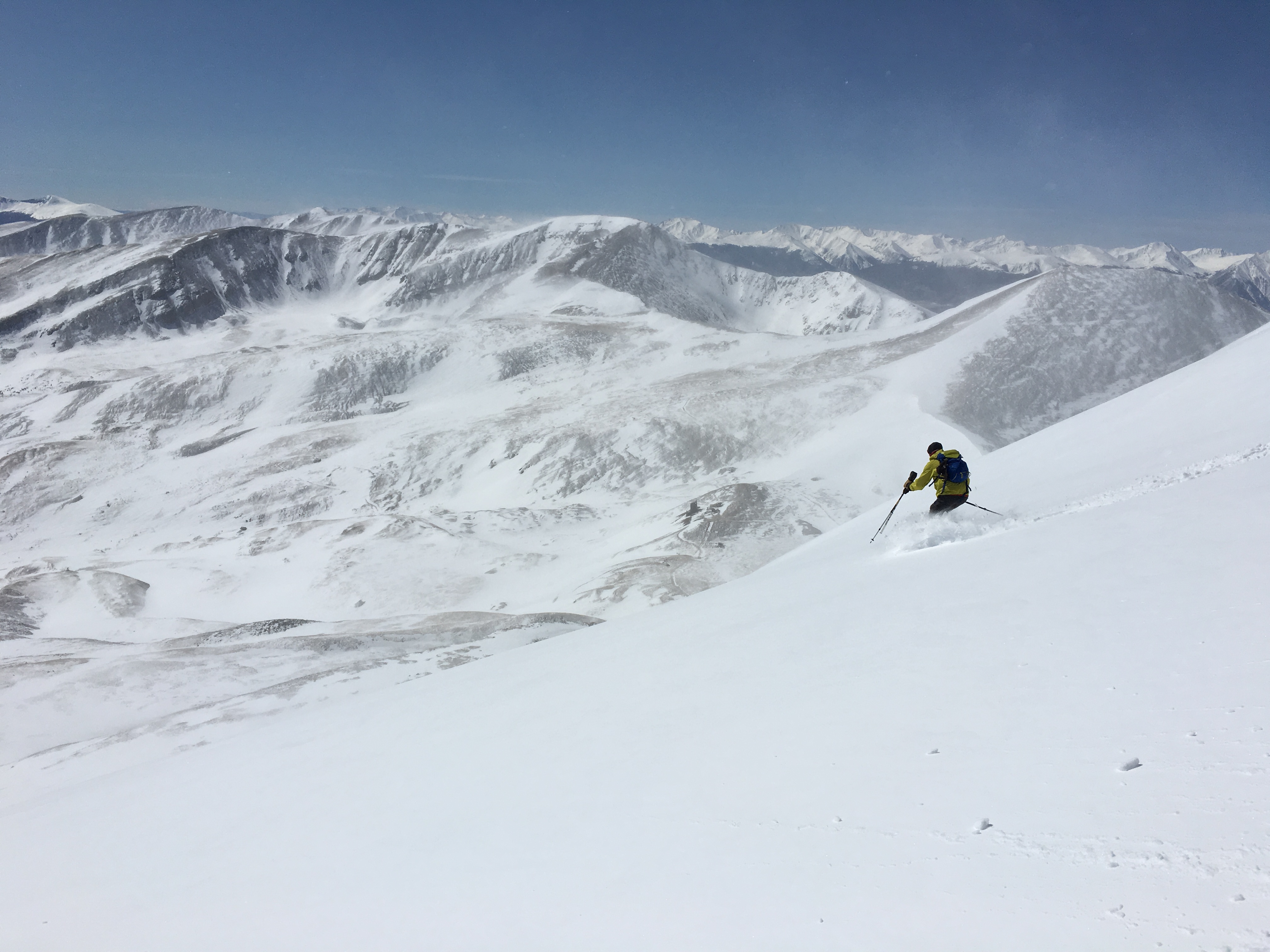 Then the hard part came, we had to reascend and mainly traverse back to the saddle Between Sherman and Sheridan. 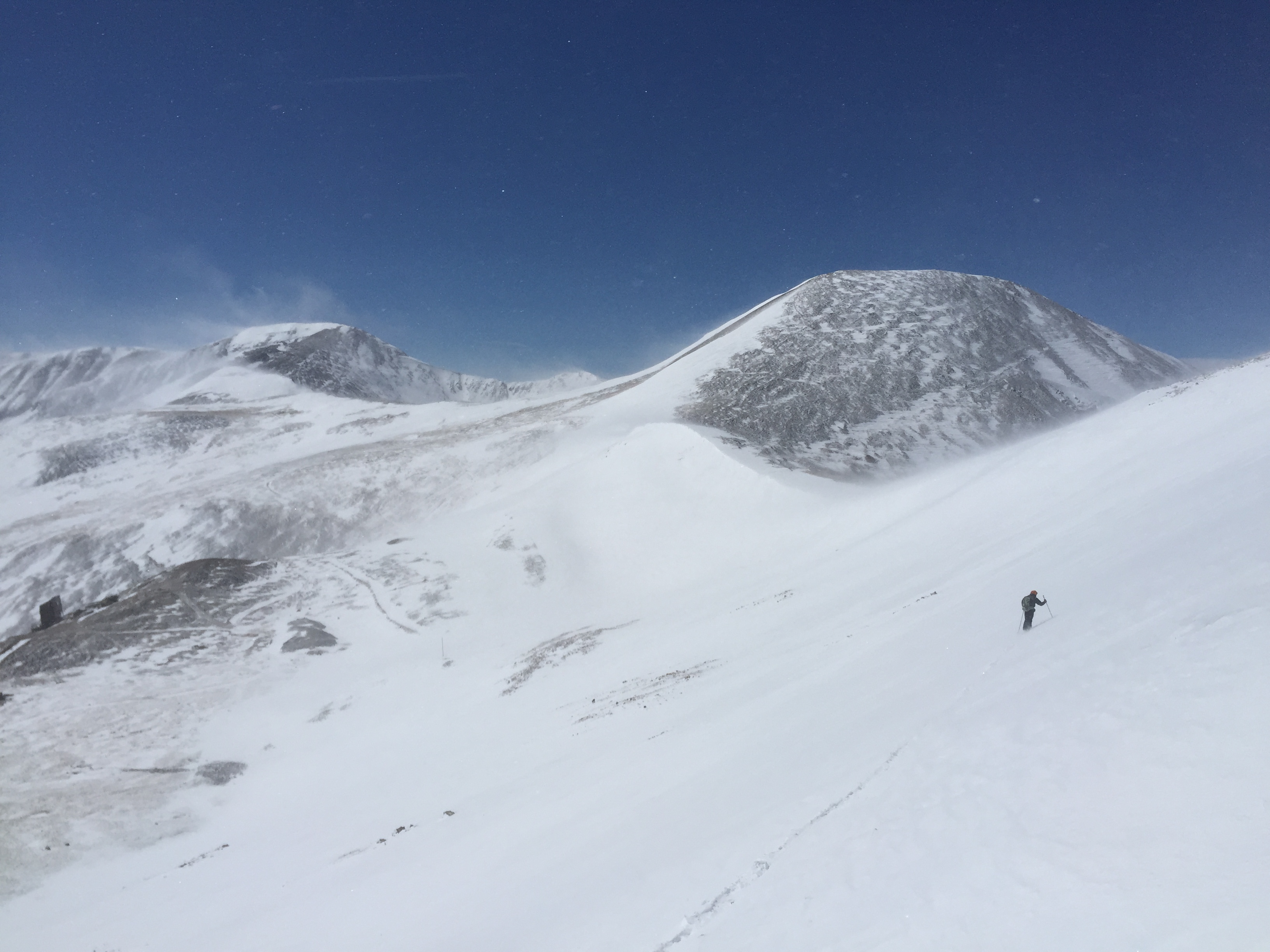 Crossing back up to the saddle to head back to Iowa Gulch.

With winds up to 50mph in our face, it was tough, but we got it done. 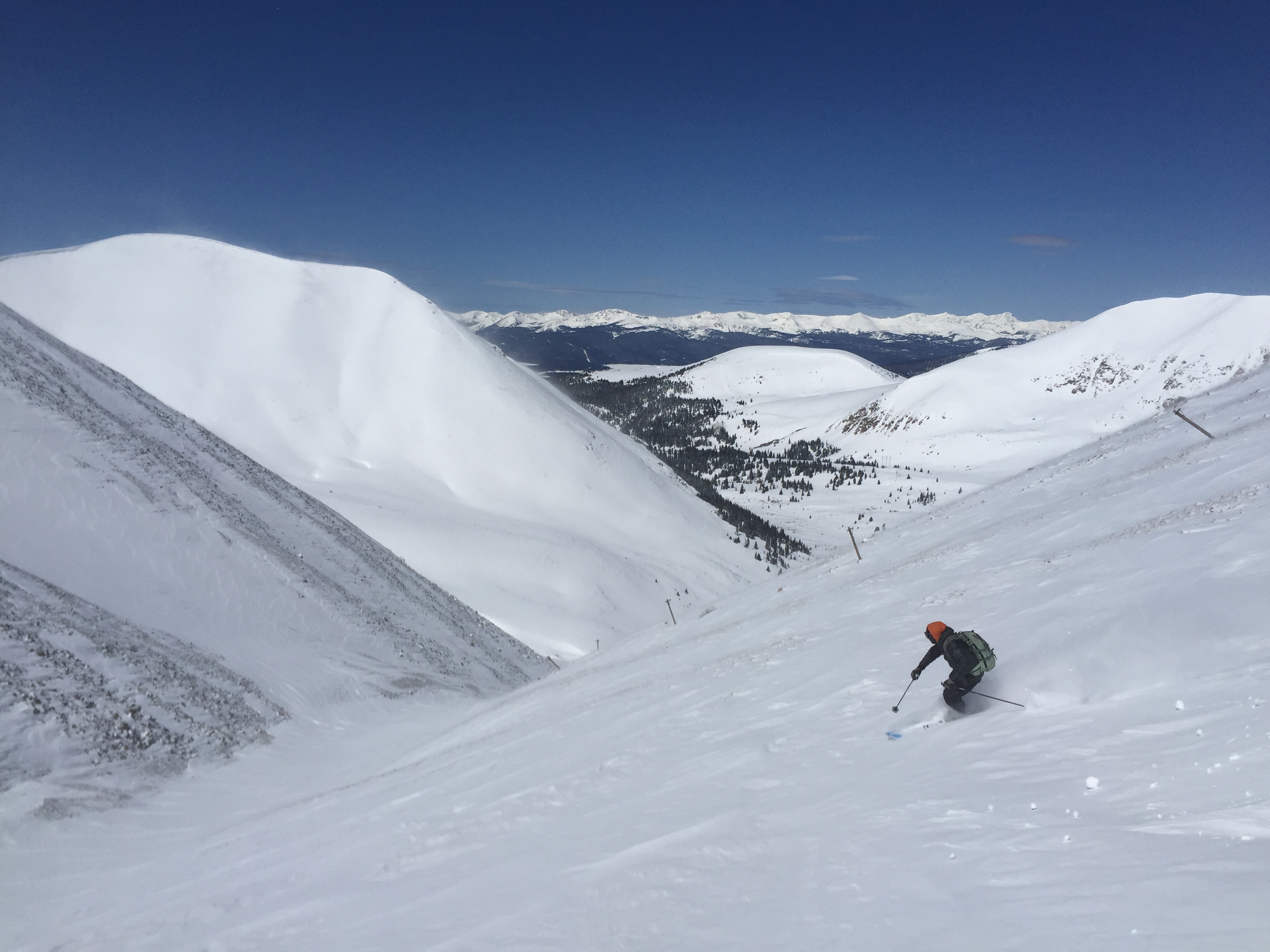 More great snow below the saddle and into the west gully.

Once on the saddle, we skied the west gully back down into Iowa Gulch and were soon back on our way to the trailhead. 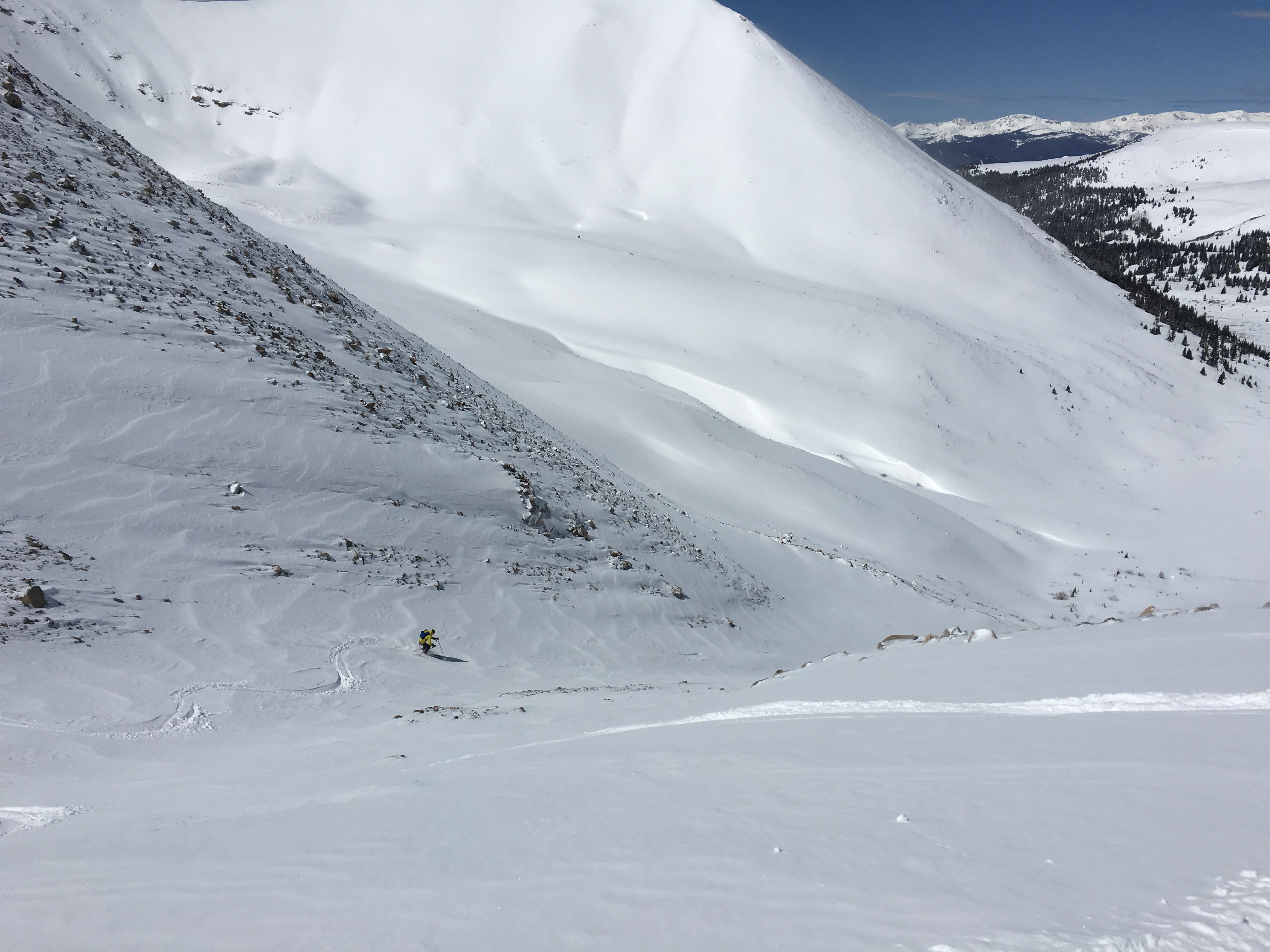 Jon getting it done headed back home.

It felt awesome to get Sherman in the bag because without that new snow, it may not have been skiable. 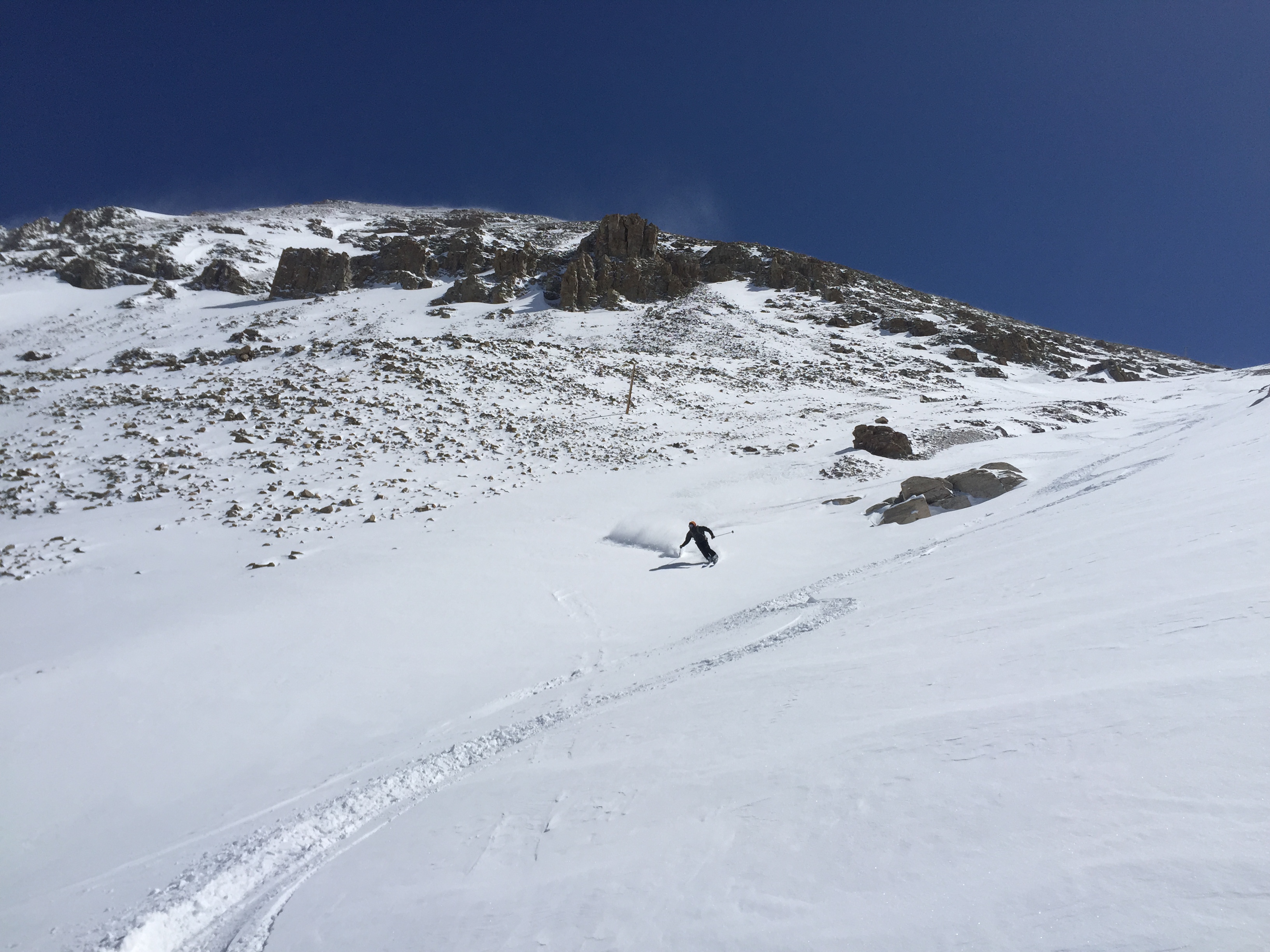 Roger carving down the powder.

20 peaks down and the adventure continues, what a spectacular Easter Sunday! 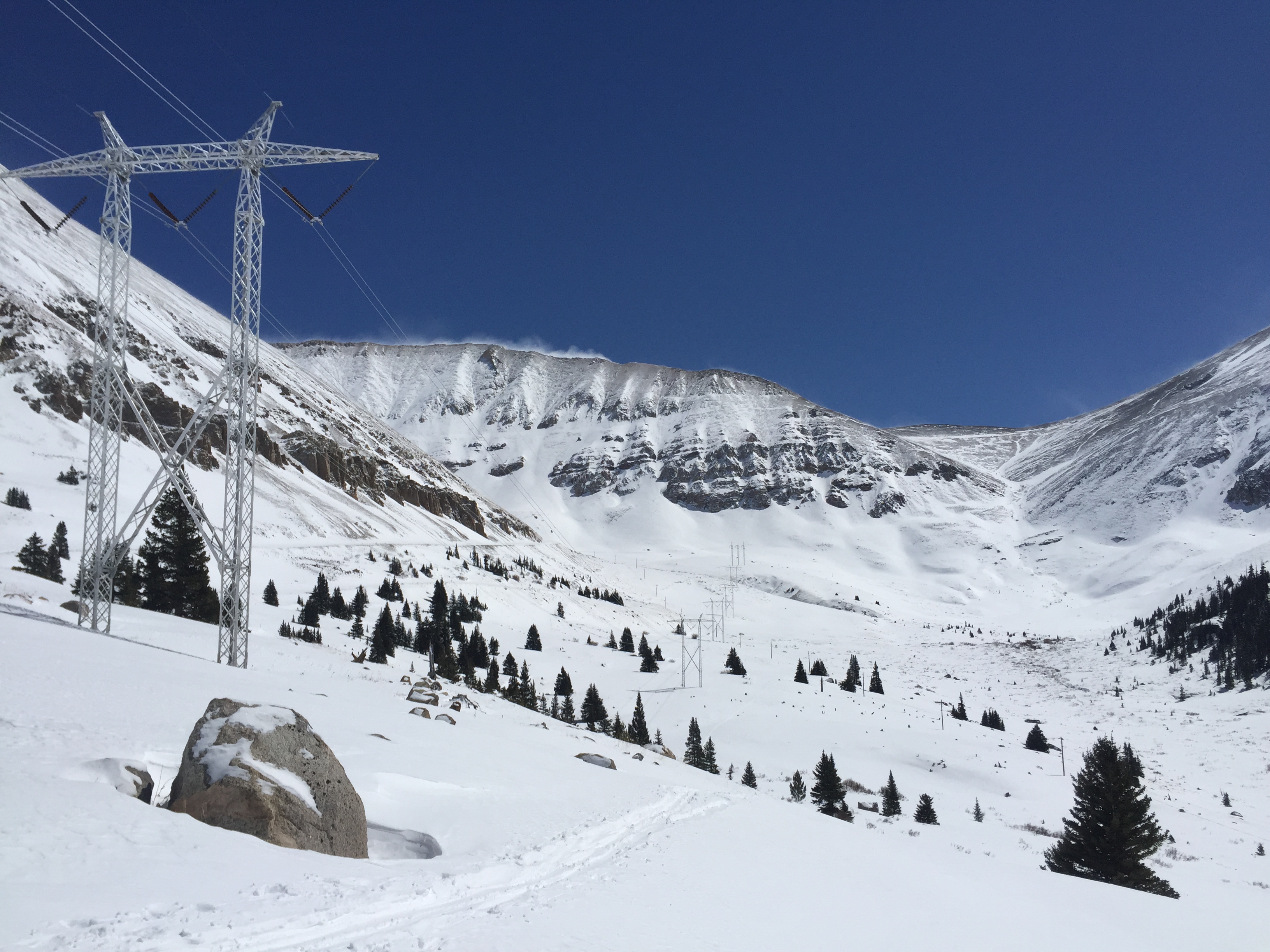 Looking back up towards the peak and the gully we skied. Peak #20 in the bag.

Thanks for following along,