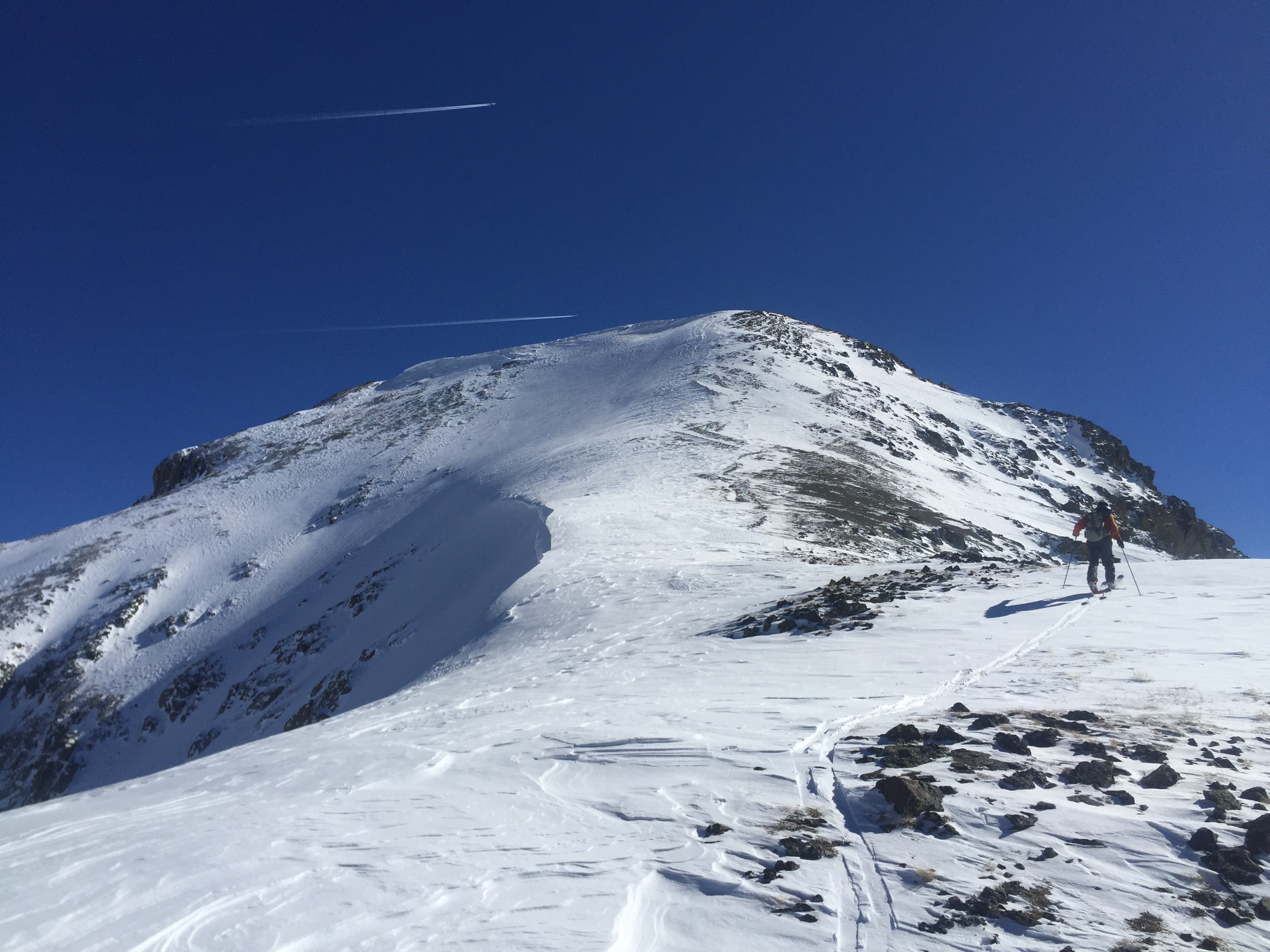 Roundtrip Mileage and Vertical: 22mi / 10,200′ (Includes Redcloud and Handies all in the same day).

Start Time: 1pm  (after lunch and having skied Sunshine and Redcloud)
Reached Summit: 5pm
End Time: 5pm at Silver Creek/Grizzly Gulch and 4 miles down the road to near Mill Creek by 730pm. 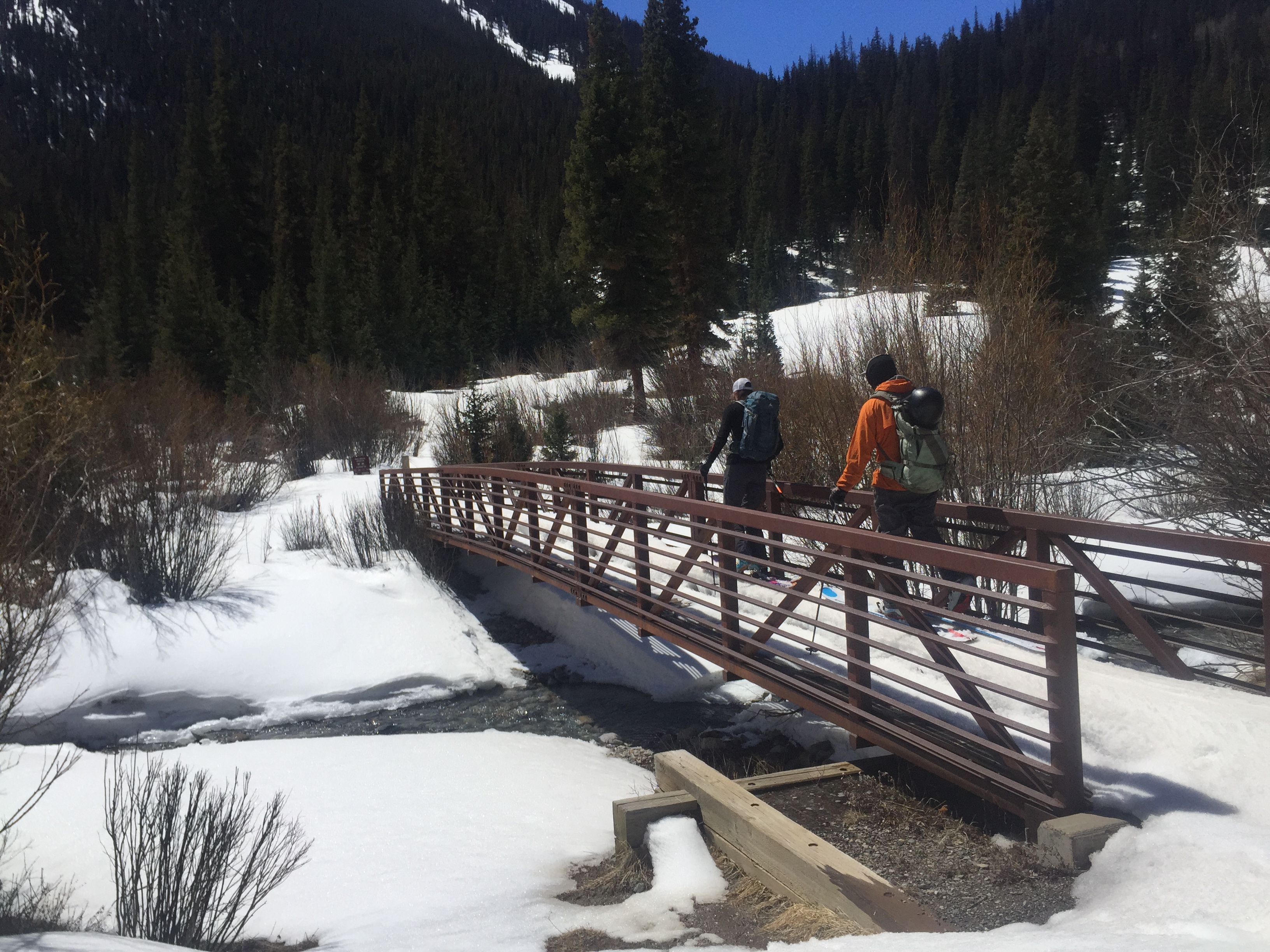 Starting back up towards Handies to complete the Triple.

So it was time for Handies – We put our skins back on while enjoying the hot sunshine after lunch and started up the Grizzly Gulch trail. I had to break trail up the basin, but following the wide trail corridor was easy. It was such a brilliant day and the snow in the woods was consolidated enough so we still weren’t sinking too bad. 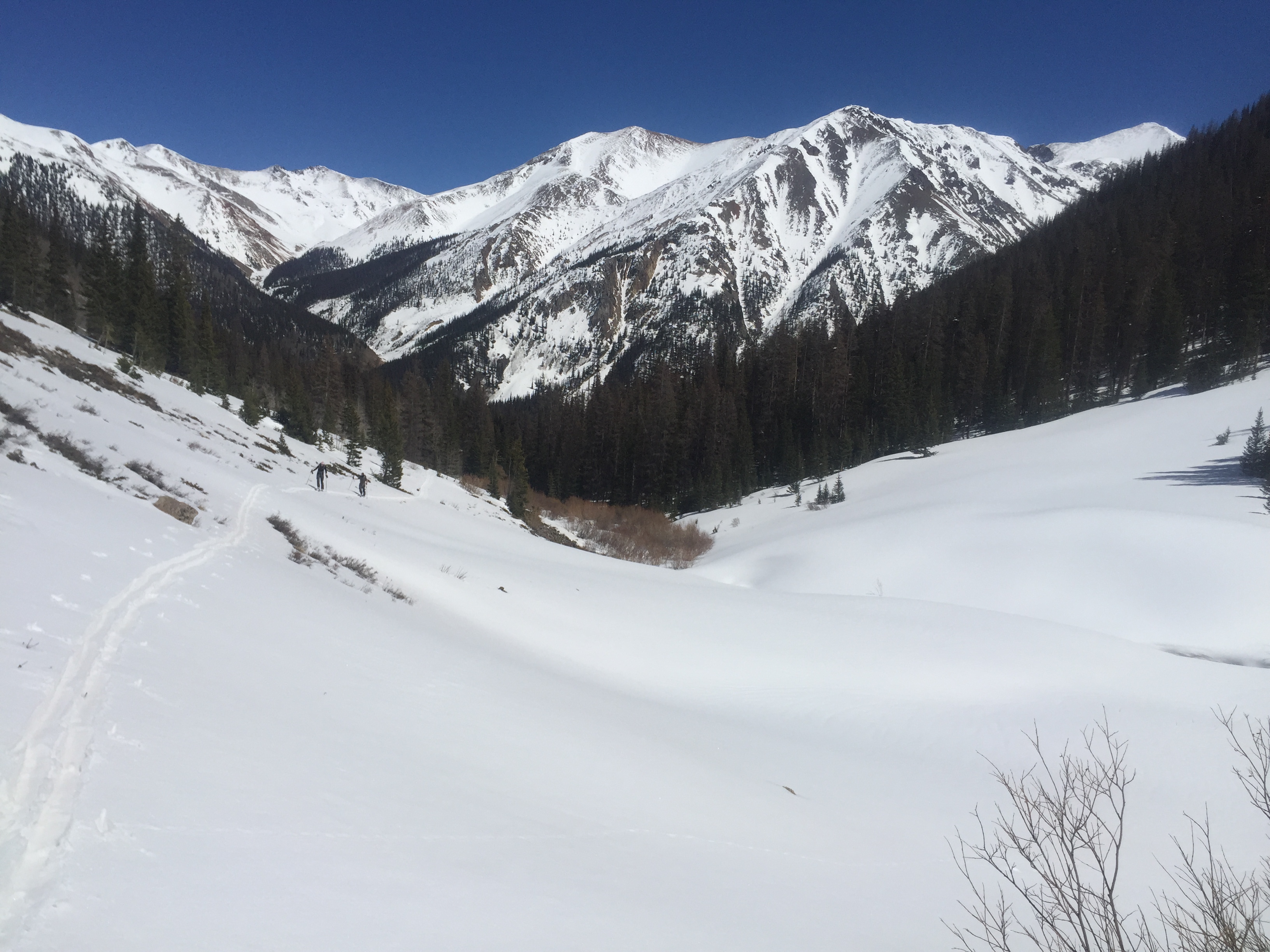 Redcloud and Sunshine in the distance.

Around two PM just below timberline I paused to take a break. Anna was coming up the trail and Roger followed. They reached me several minutes later and Anna admitted she was pretty wiped out. Anna decided to head back down to the bathrooms at the summer trailhead where we had lunch. She would wait there for our return then we would all go down the road together. Roger and I continued. 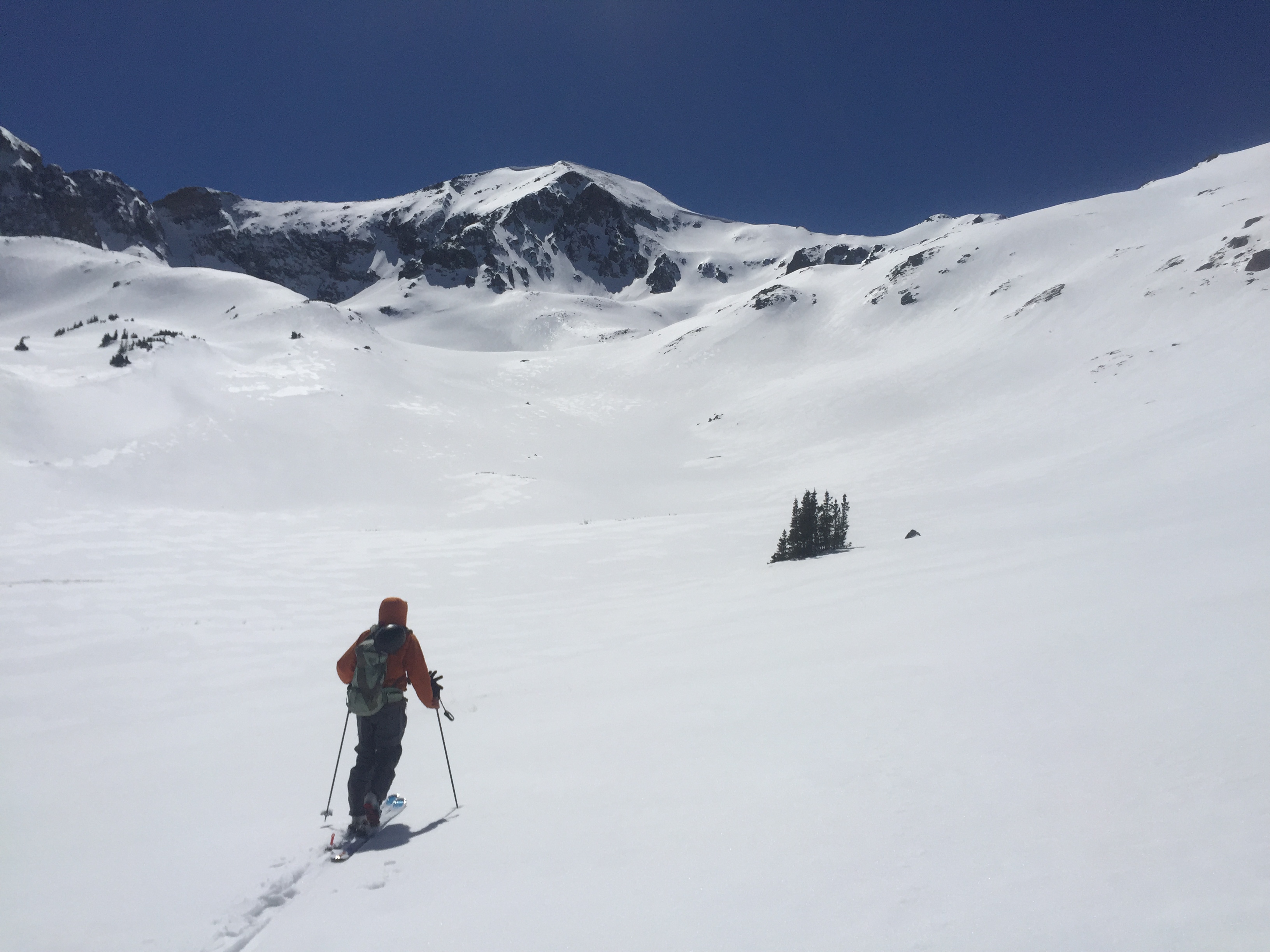 Roger leading the way towards Handies.

We were above the timber by 3 and making our way west into the massive eastern basin of Handies. Slowly but surely we overcame some of the corniced north ridge of Handies. 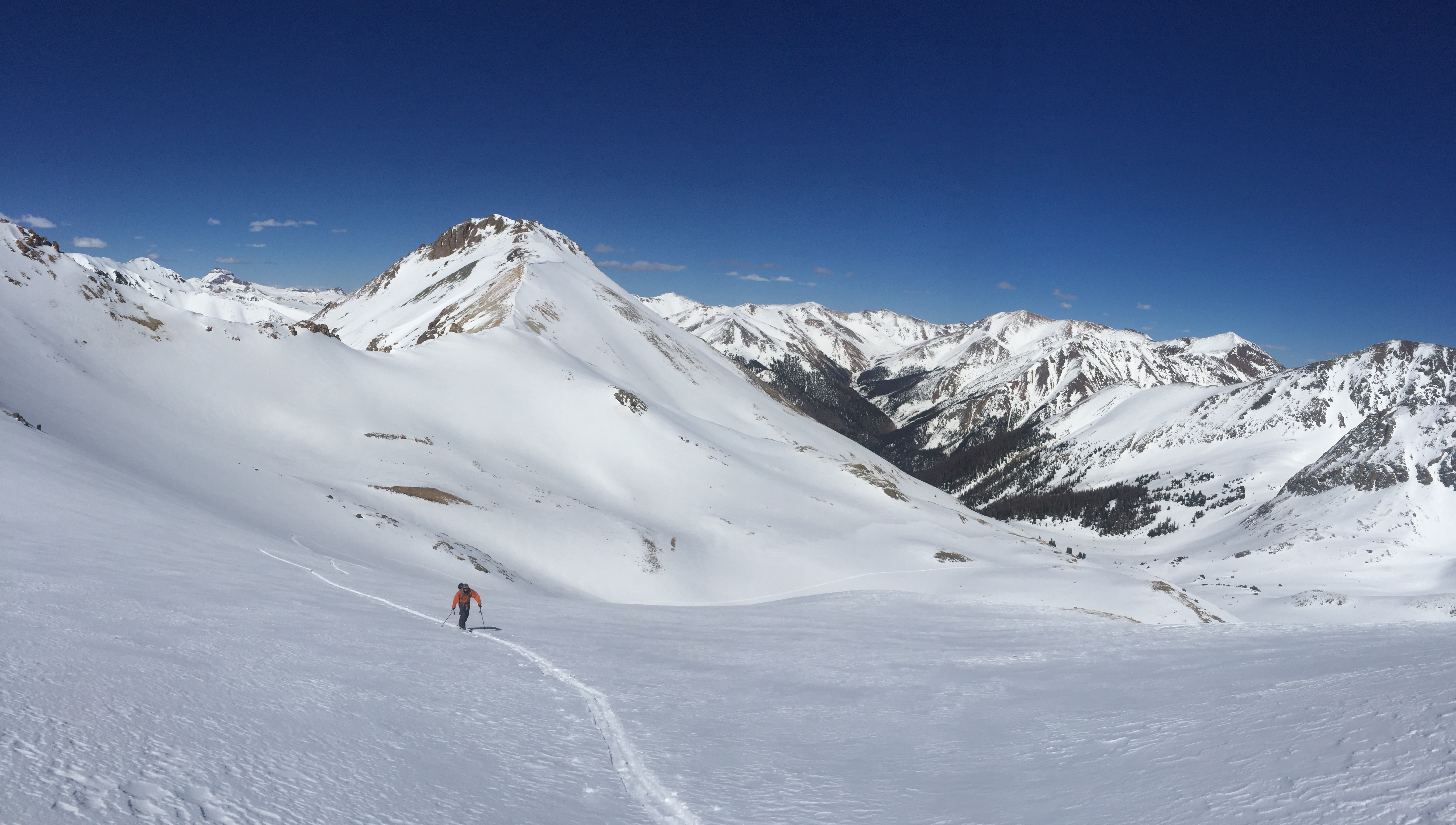 Then the steep north ridge became our final obstacle. 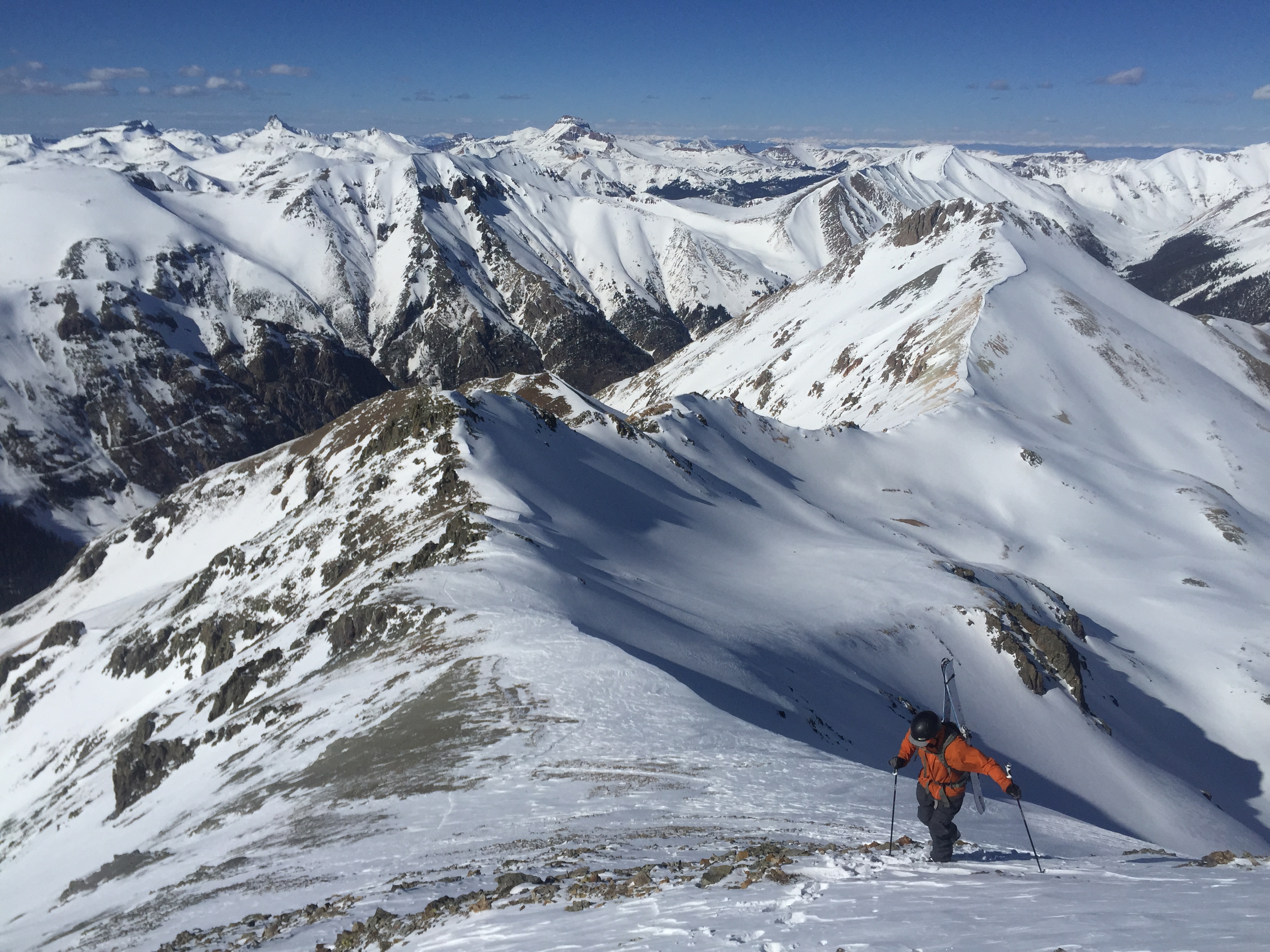 Close to the top!

Booting up to the summit ridge it was approaching 5pm. What an amazing day. A short skin later Roger and I reached the summit together.

Endless mountain views all to ourselves on Handies.

How awesome was skiing all three peaks in the same day? Spectacular! 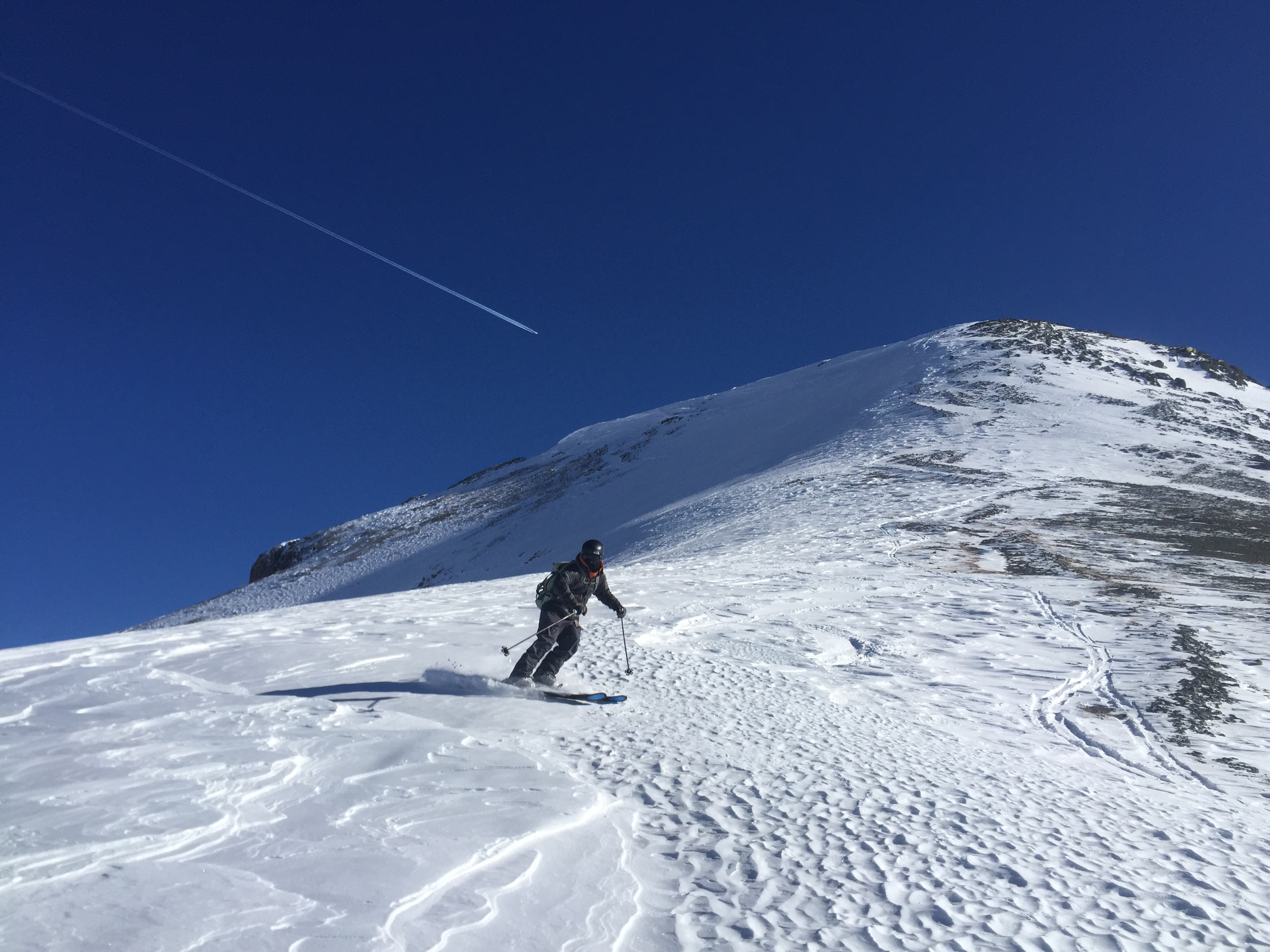 Dropping back down the north ridge cautiously we made some turns and once we dropped off the cornice and into the eastern basin we opened it up and skied some very fun turns in the basin and into the woods, meeting back up with Anna on the snowy summer road at 6pm. 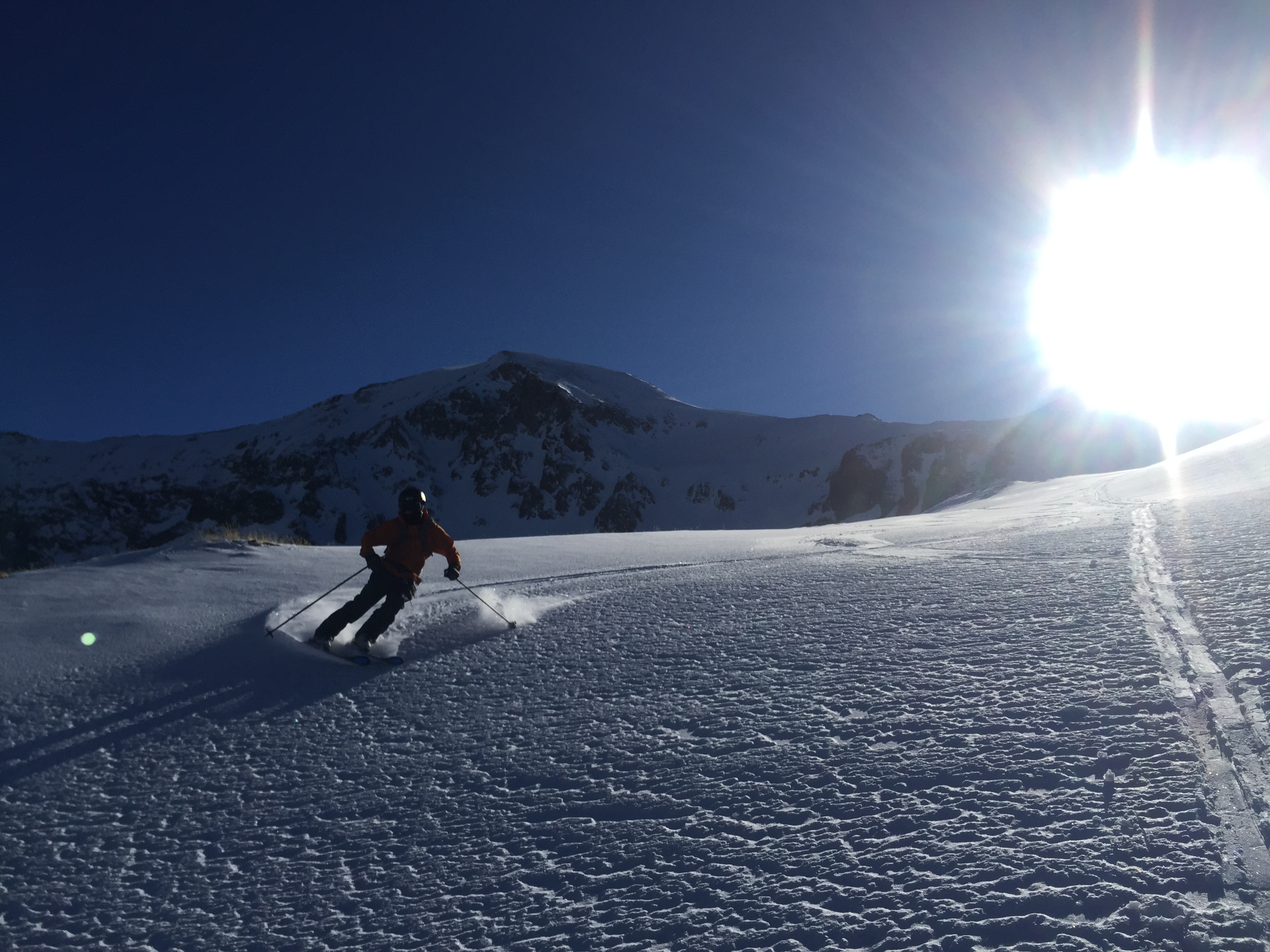 Then we slogged out the road for two miles and hiked about another two down to our vehicles near the gate near Mill Creek. On to San Luis next!. 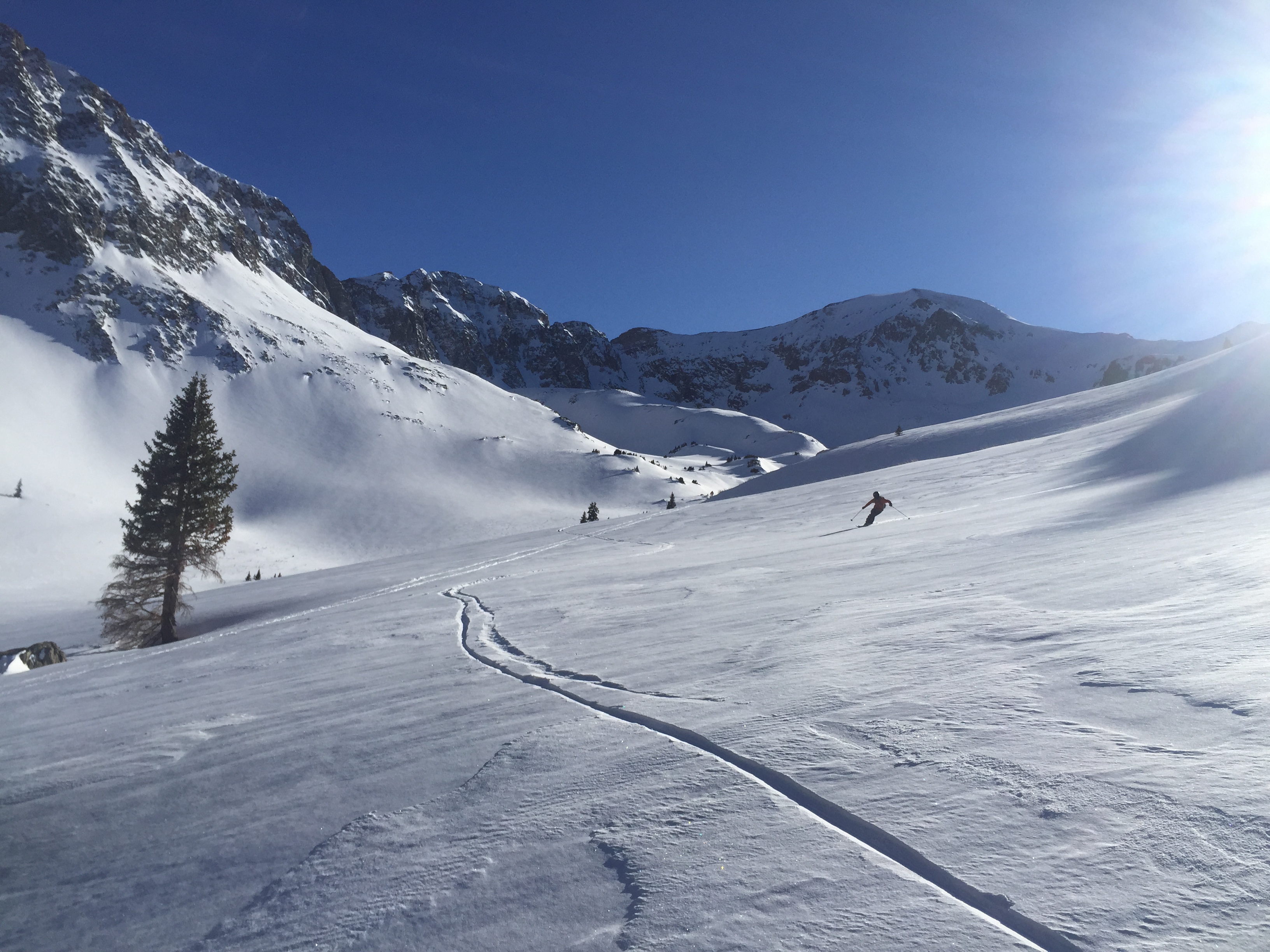 Cruising into the basin. 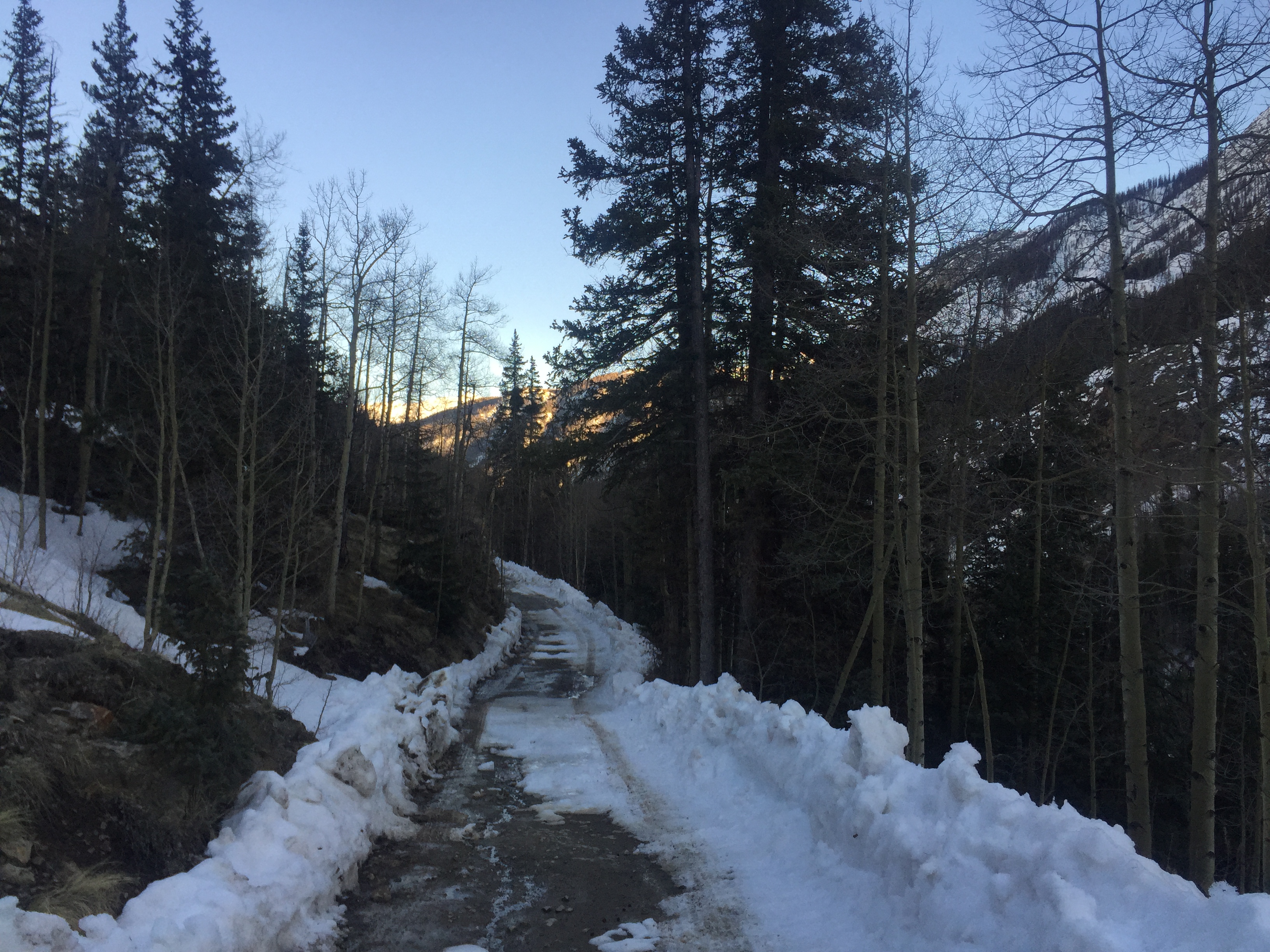 The road out, they have attempted to plow it, so we couldn’t ski the final 3 miles!