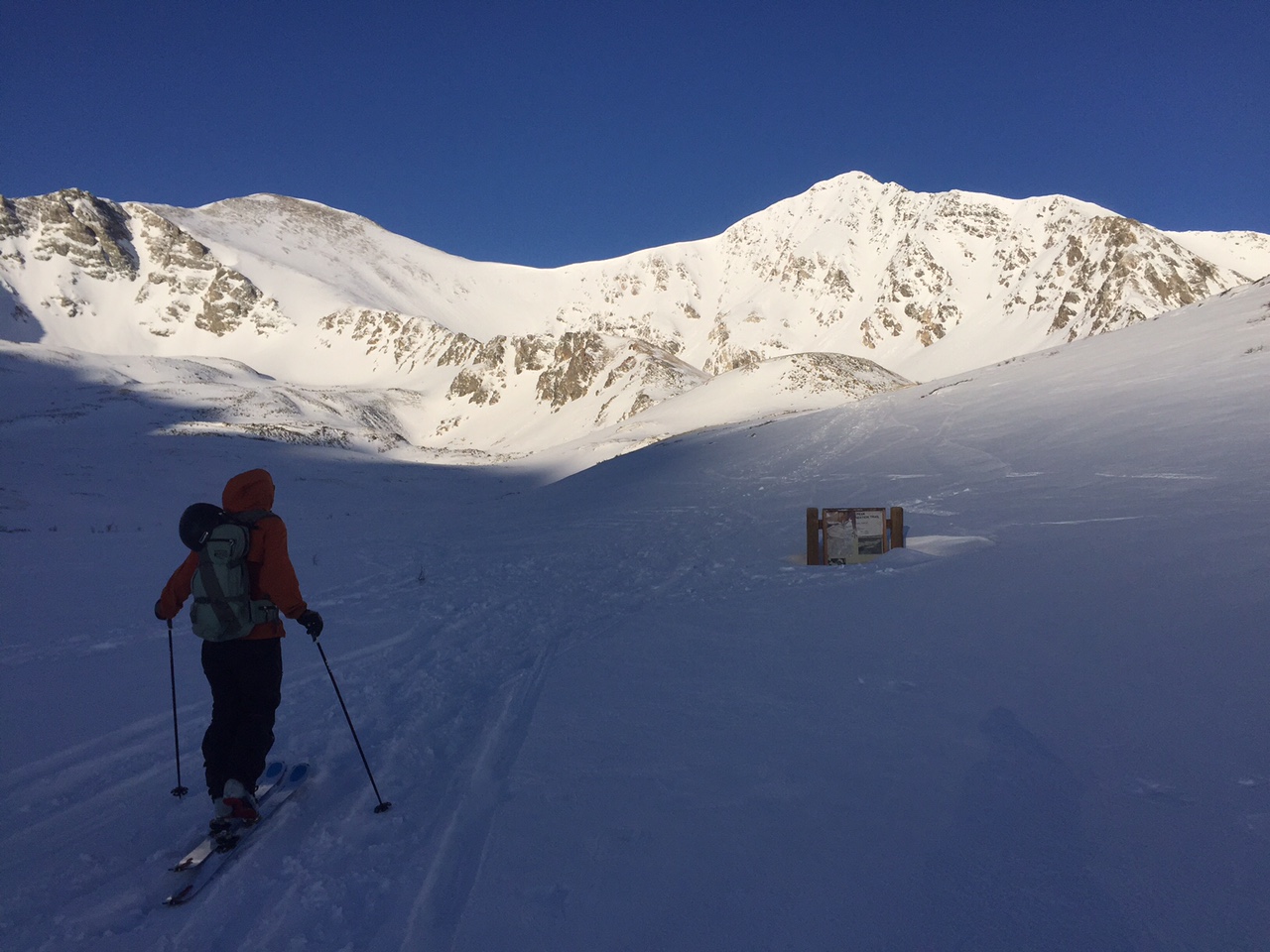 Heading up as the sun just starts to warm us up.

Ski Route:  Stevens Gulch to East ridge to top of Grays, north ridge Grays down to saddle, up south ridge to Torreys summit. On Descent, skied Dead Dog Couloir and east face of Torreys, and back to Bakerville via Stevens Gulch.

Winds were forecasted to be strong on the 25th of April – so I approached a chance to get Grays and Torrey’s finished with an open mind but prepared for high winds and a miserable slog versus a spectacular ski. 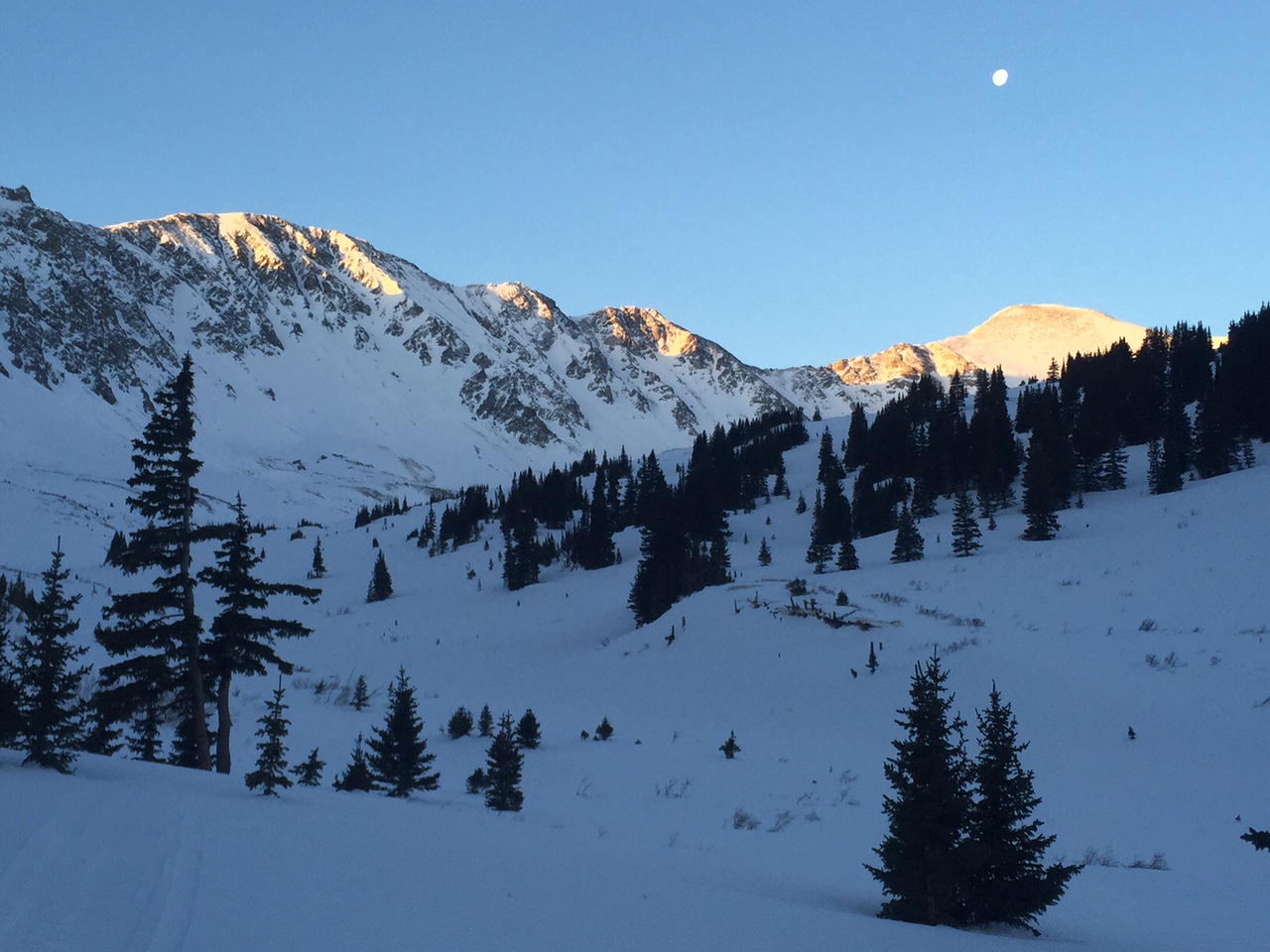 I could not have been more wrong.

Rising at 3am from my place in Vail, I was headed east on 70 in time to meet up with my buddy Roger and hit the trail from Bakerville at 430am. Nearly a Full moon was out and there was no wind as we skinned towards the summer trailhead for 3 miles. 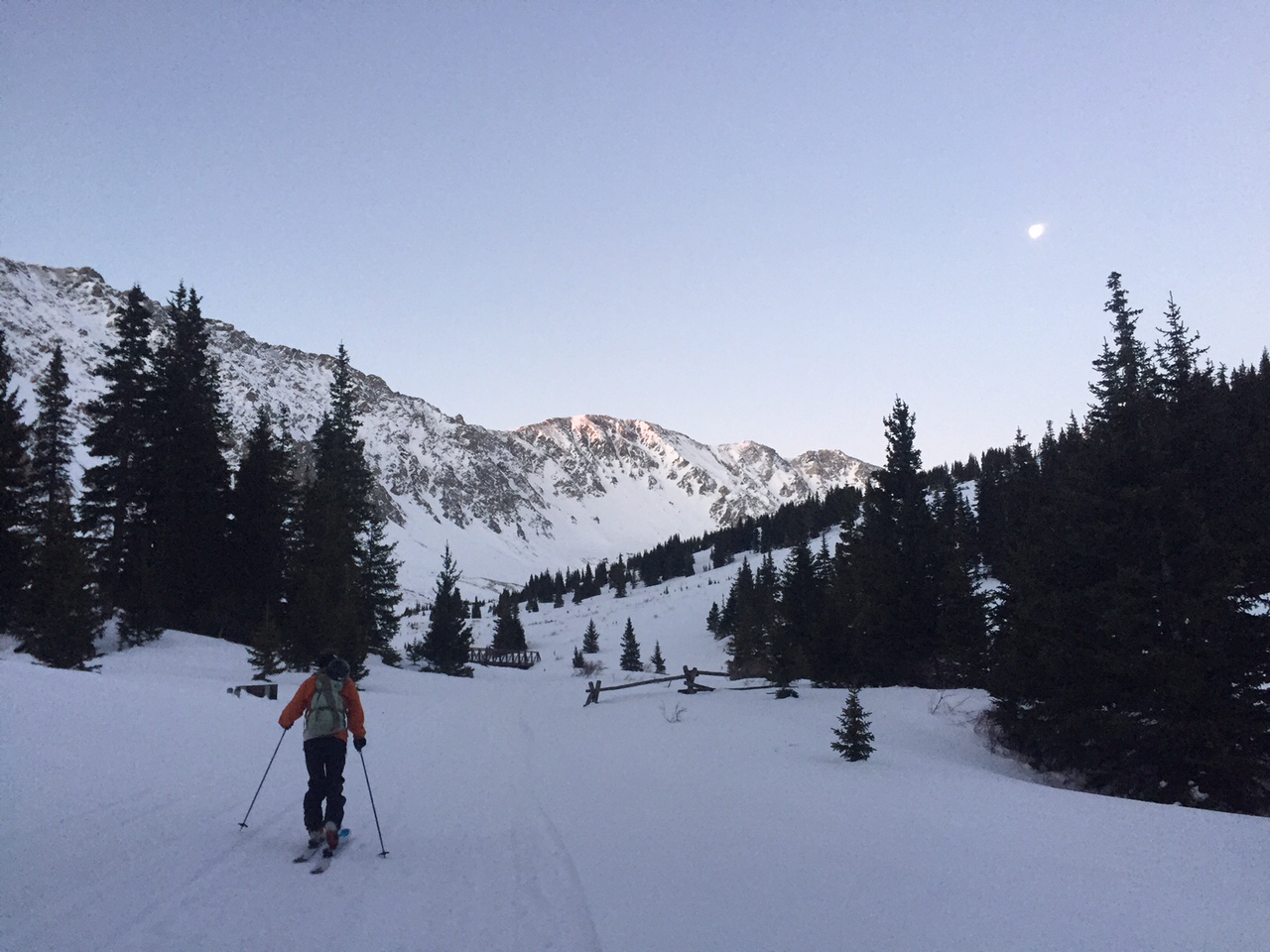 It was an enjoyable slog up the road to the summer trailhead, one I’ve done dozens of times.

We arrived at the summer trailhead just before 6am for the usual break, taking advantage of the toilets there. Then we were on our way. Rising above timberline, winds picked up with an occasional gust, but most of the time it was dead calm. The sun hit us as we rose above 12,000’ and we had an excellent view of both Grays and Torreys. Torreys East face looked Himalayan, caked with the snow of the winter and recent storms. It’s most aesthetic ski line, the Dead Dog colouir looked awesome! 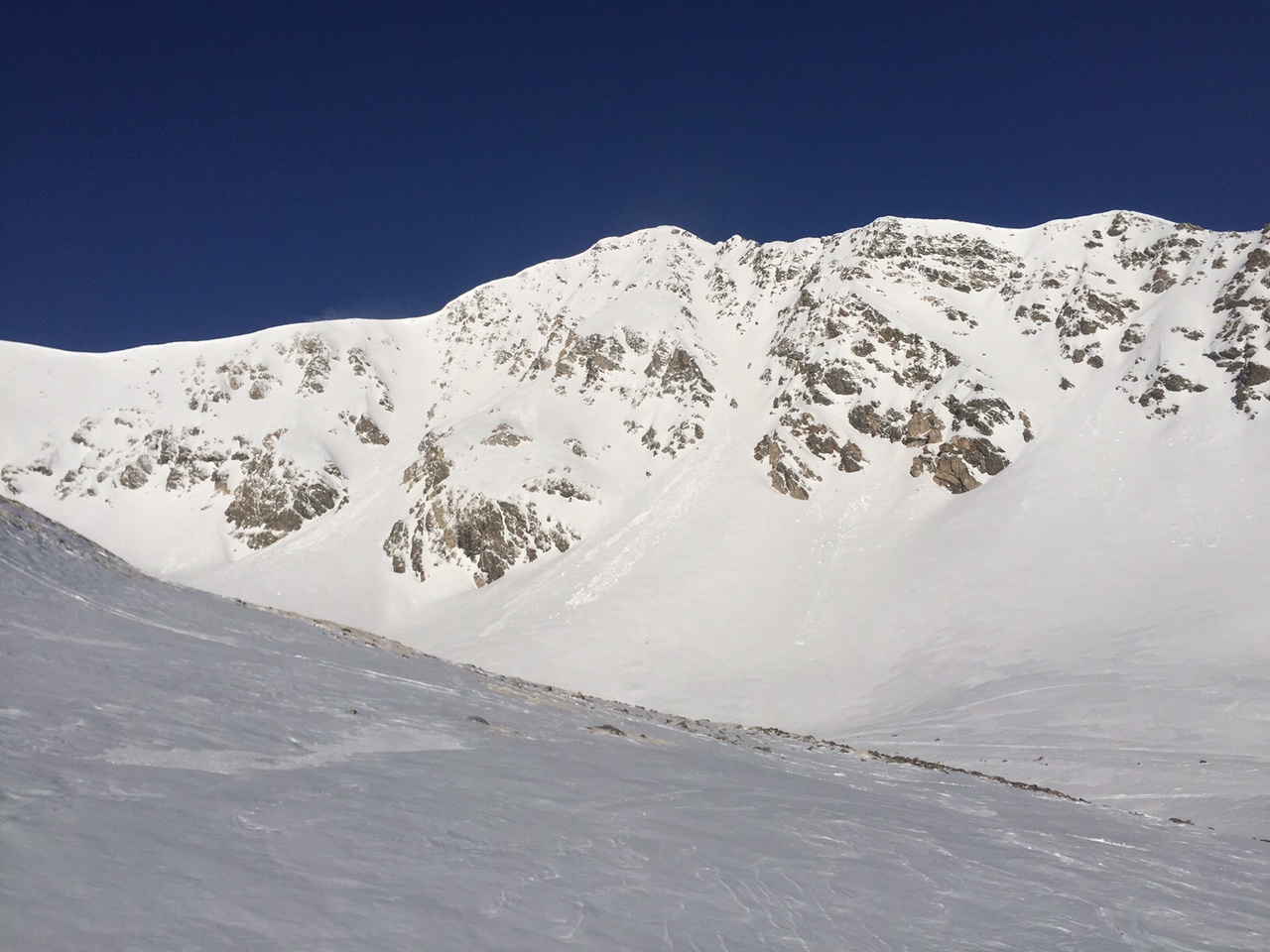 “Are we really going to ski that?” Roger asked me. “Heck yeah”! I said to him as we pushed towards Grays. Within a half hour we ascended the east ridge of Grays along some snow loaded slopes. 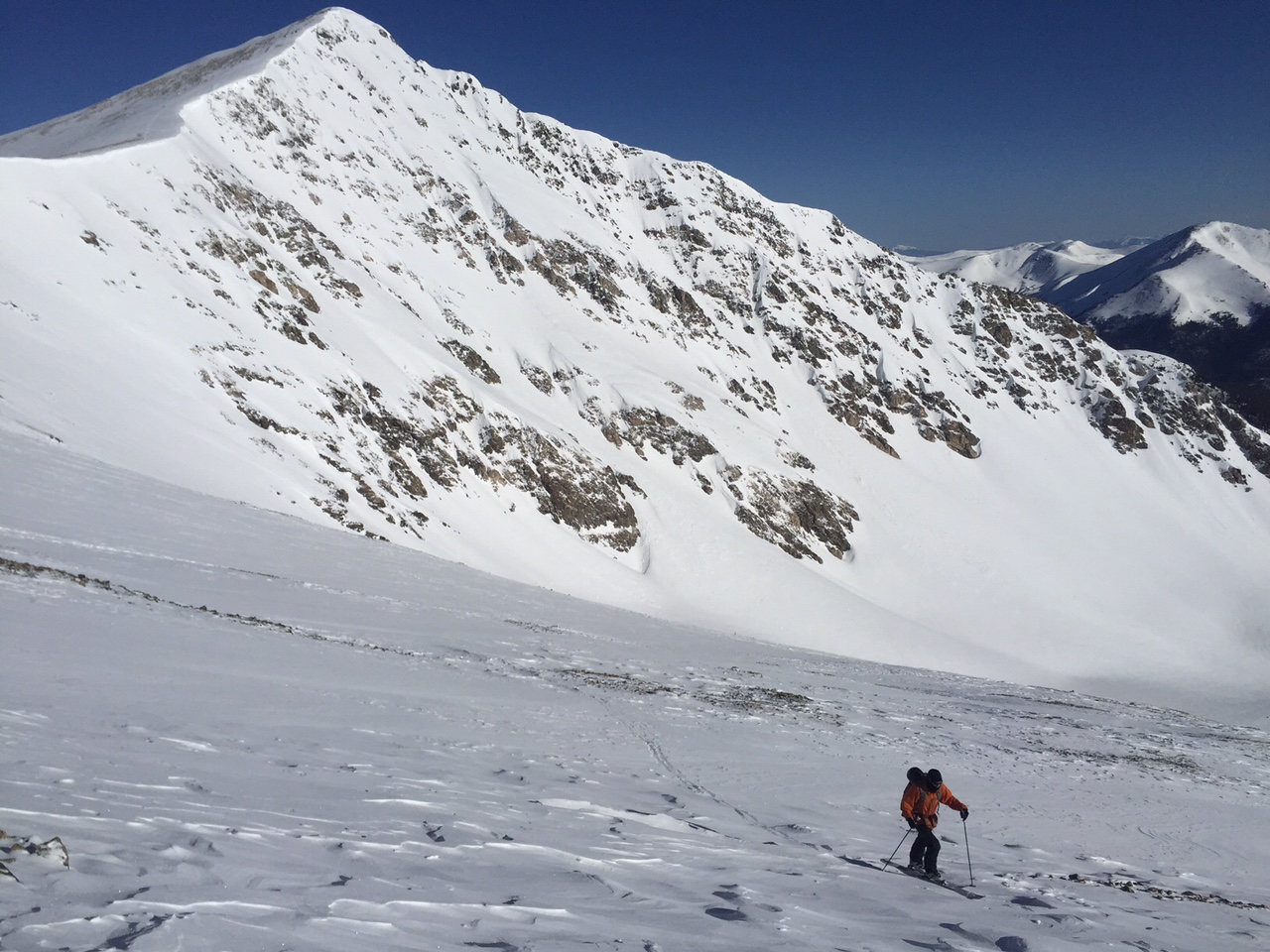 Ascending Grays northeast slopes to gain the ridge, Torreys as the backdrop.

We topped out just before 9am. It was a relaxing morning so far. Because winds were coming from the south and southwest, we only were blown hard by a Gale on the very top of Grays, but took a rest break to the leeward side of the summit along the upper part of the north ridge. 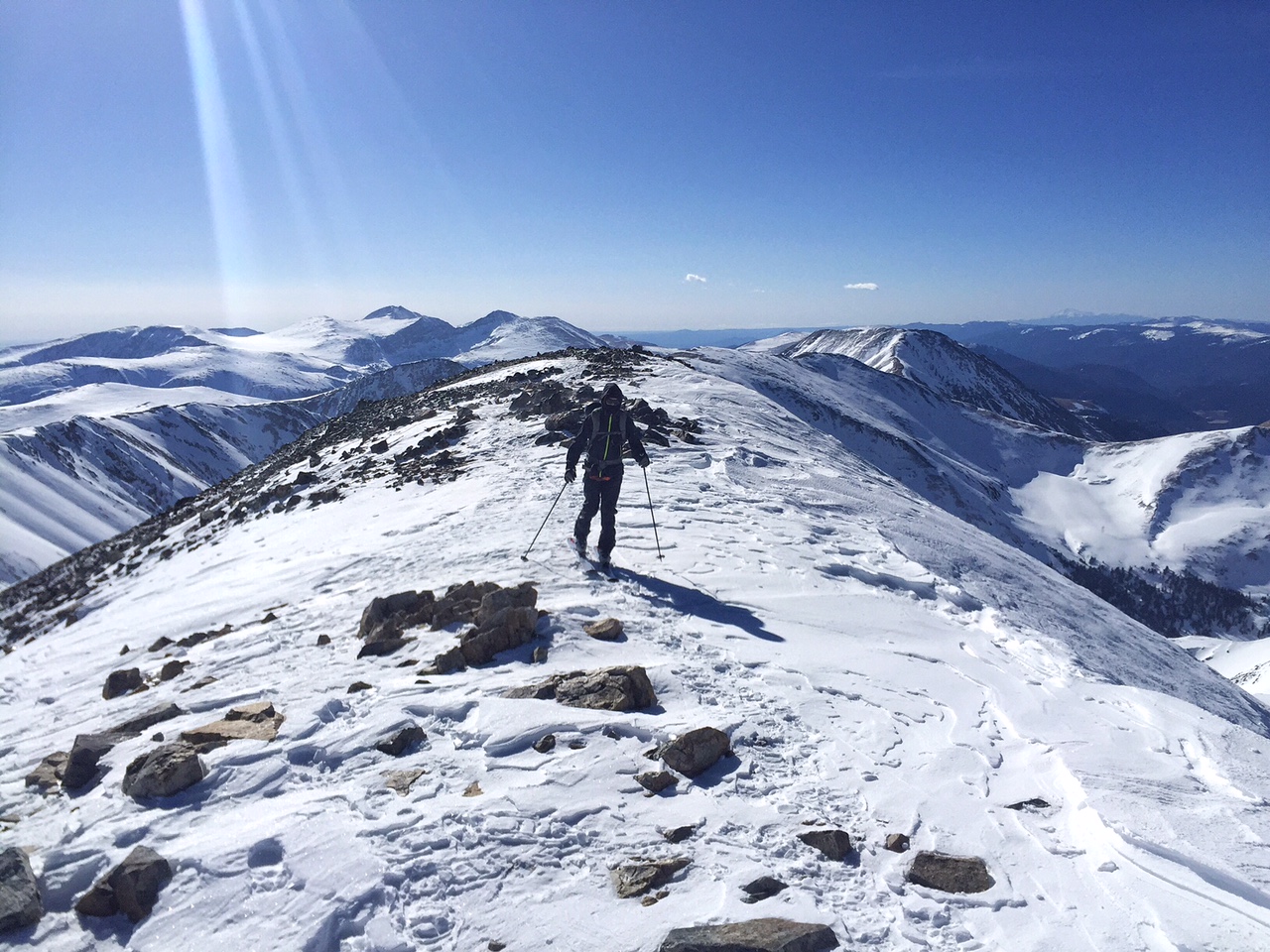 Topping out on Grays.

A quick transition and we skied the north ridge of Grays in minutes, reaching the saddle between the two peaks, where we headed up to Torreys in no time. 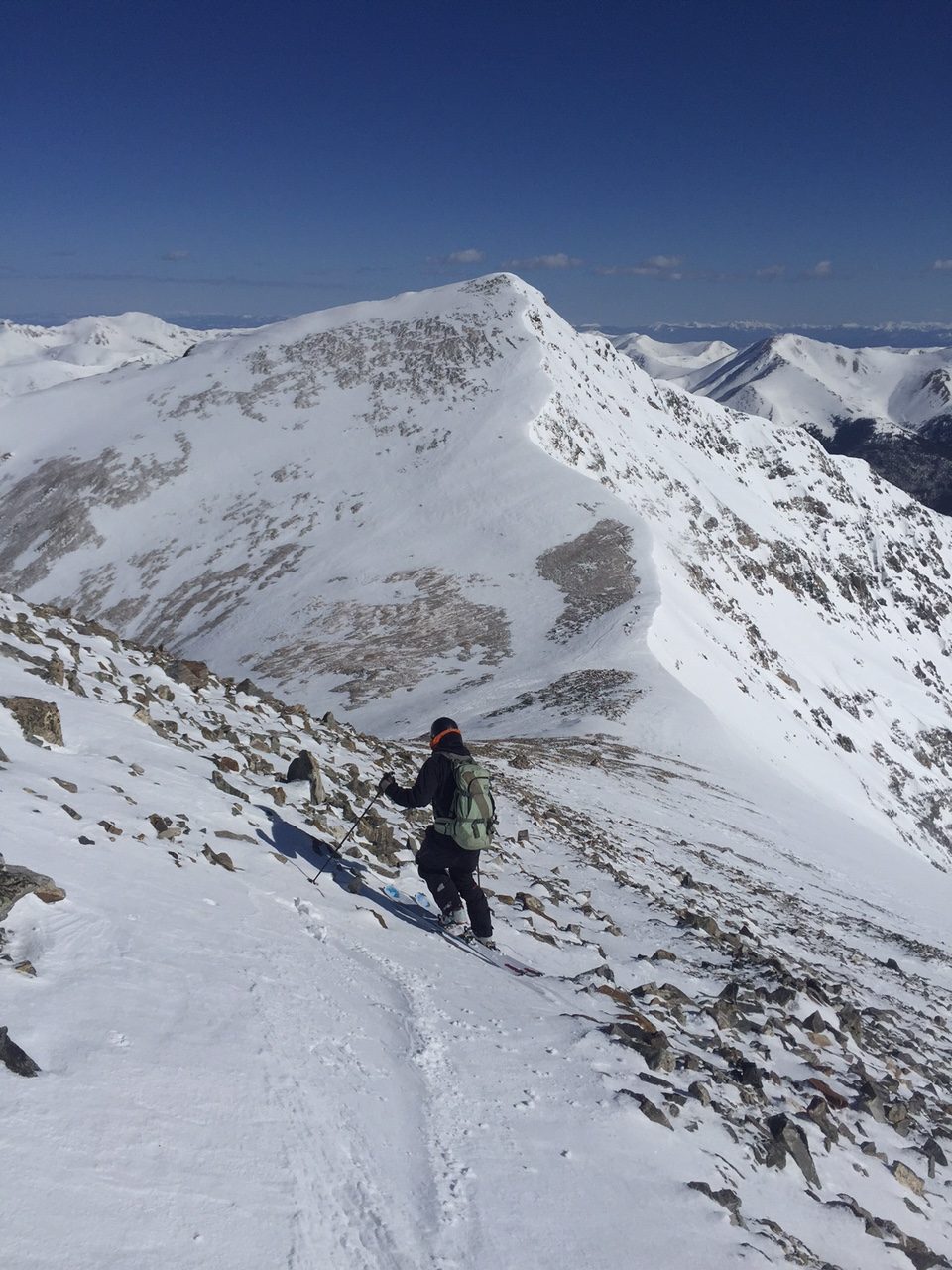 North ridge aspect of Grays with just enough snow to get down it.

Along the Saddle I thought about my friends Chris, Paul, Erik, Ryan, and a few other guys that were up on Grays over the weekend. My friend Paul had fallen on skis and broke his Tibia. A helicopter had landed in the saddle to assist him. While I wasn’t there over the weekend, it made me think and consider the risks up here. Also I wish Paul a fast road to recovery. 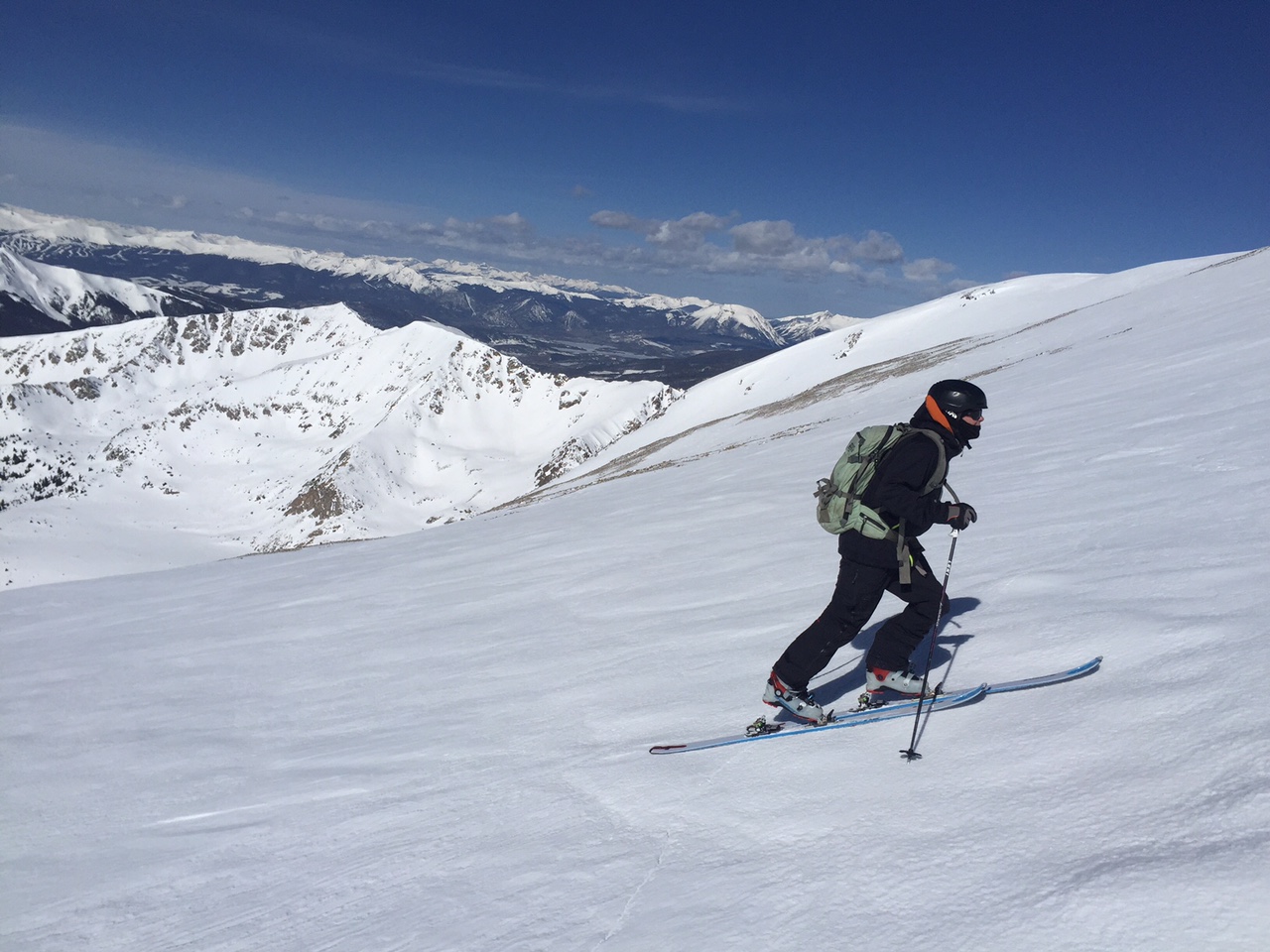 I am grateful to be able to continue this project happy and hope for safety moving forward as well. 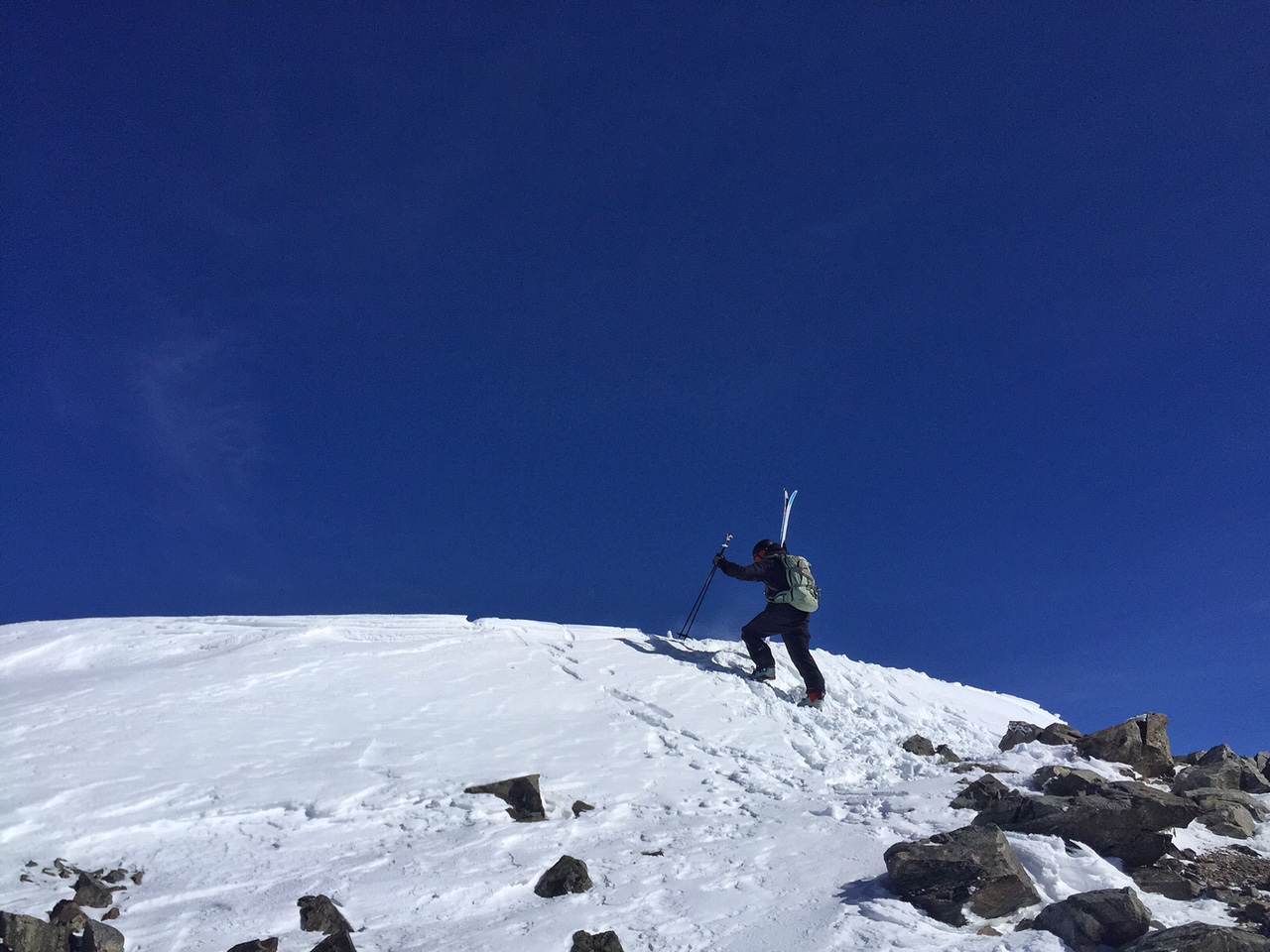 Roger taking the final steps to the top.

By 930 we had topped out on Torreys and it was all downhill from here. This was probably my 50th summit of Torreys at least, a peak I love to ski multiple times each winter and do trail runs on the peak in the spring. 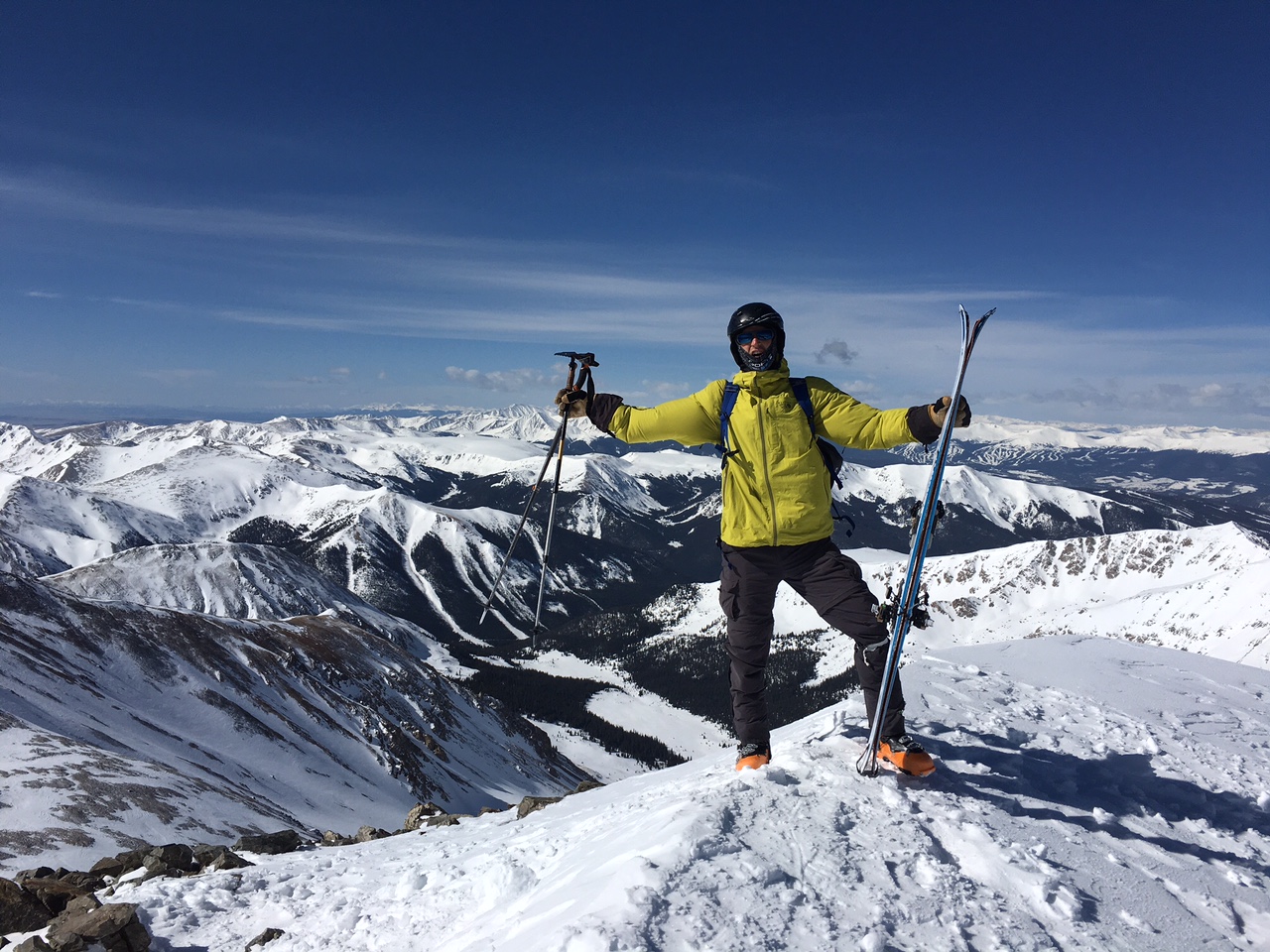 We transitioned quickly, as we were a bit concerned the east facing and southeast facing portions of the Dead Dog would be heating up in the sunshine. 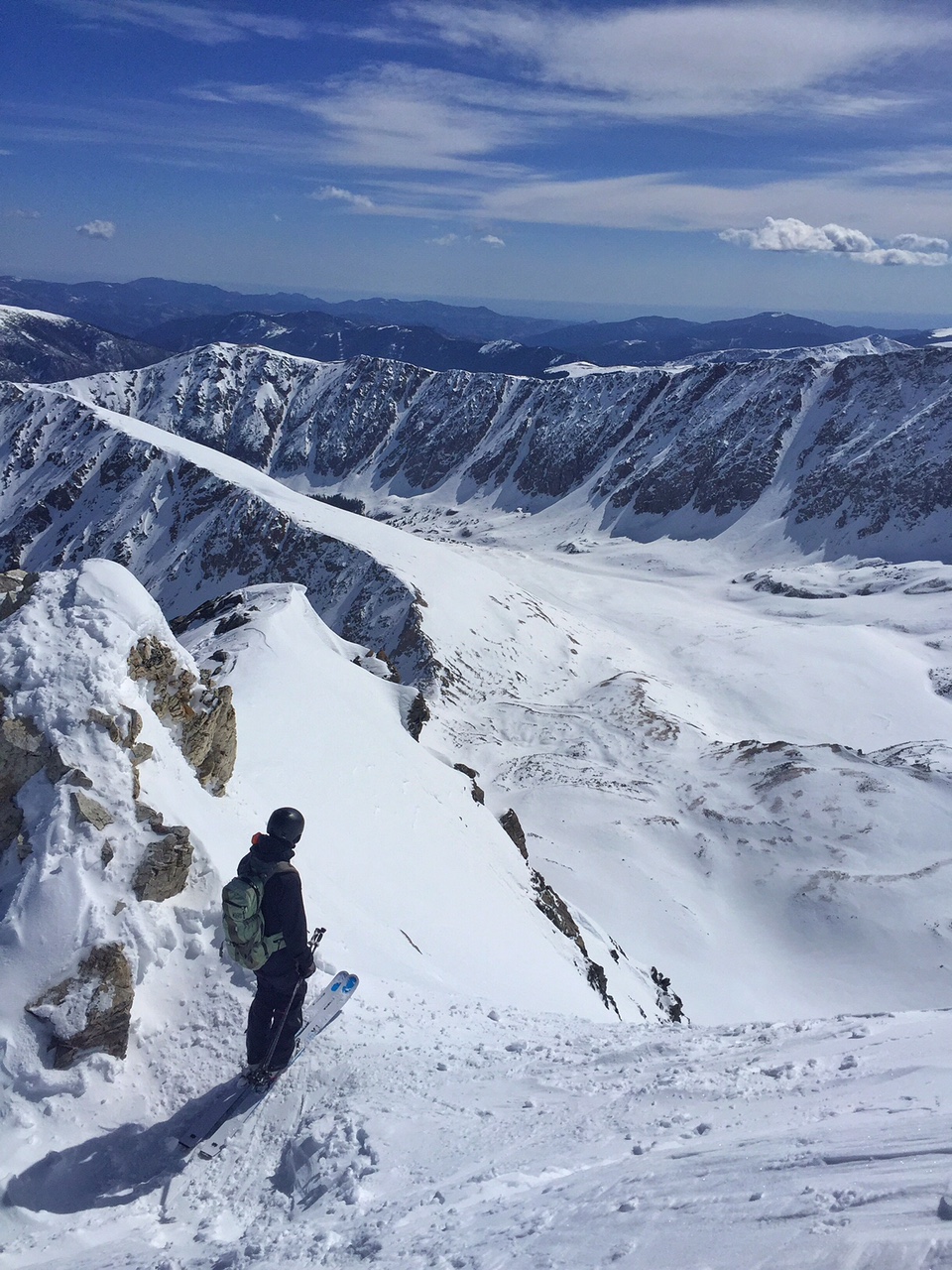 Getting ready to drop into the Dead Dog on Torreys.

A short and careful 150 foot ski got us down into the entrance of the couloir near the famous shark tooth feature on Kelso ridge.   Fortunately the southerly winds and spin drifts and cooler temps on this day had not made the couloir too soft or wet-slide prone just yet….but we had to go now, it was nearly 10am, honestly my cut-off in April for skiing certain aspects due to warmth: 10am can be a pretty good rule, and in May it 9am or earlier.

We tossed a few rocks in and the snow still looked soft enough.   Roger and I did a little paper- rock- scissors for the honors. I lost, so Roger got to drop in first. He entered the chute, cut a few turns and headed down to the first rest stop behind some rock bands. 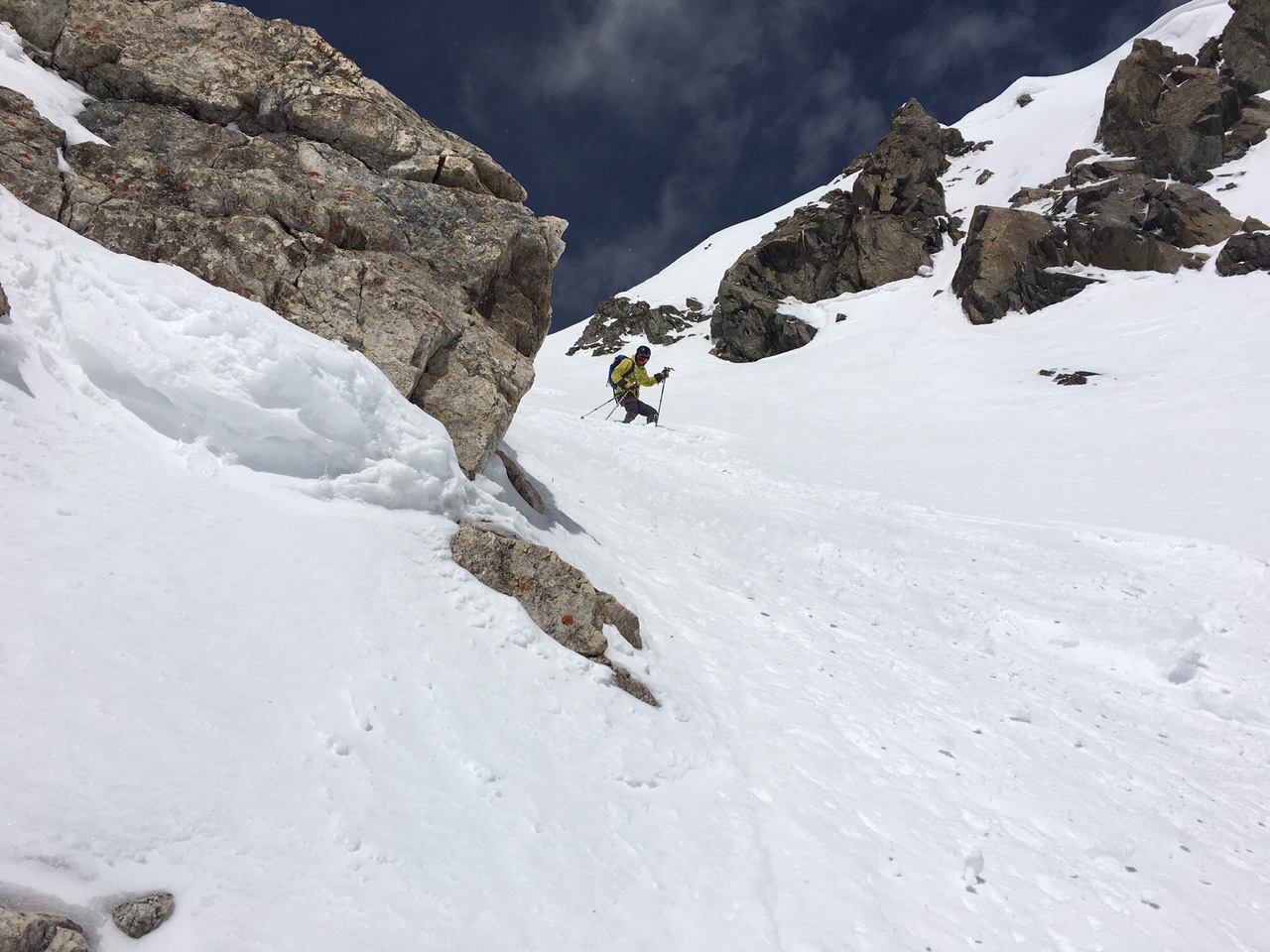 Me coming down after Roger.

I followed, then we regrouped and headed down individually for the long sustained nearly 2,000’ ski! 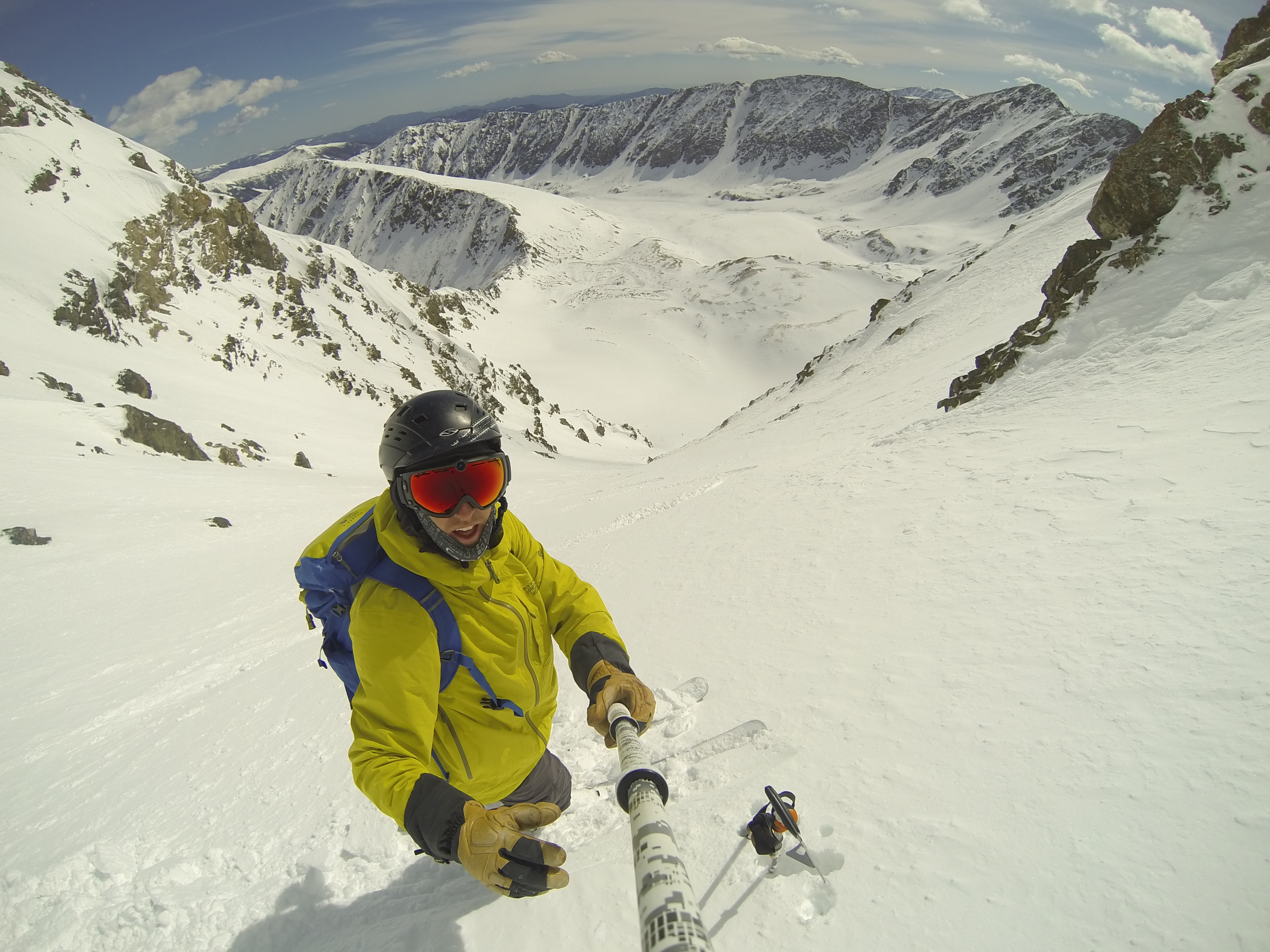 The couloir had some awesome snow in it throughout, up to a foot most of the way. Only the bottom near the apron was a bit choppy from older avalanche debris.

Once down in the Apron the skiing was nice GS turns. Roger and I exchanged some high fives and were off and down the basin for some easy turns. 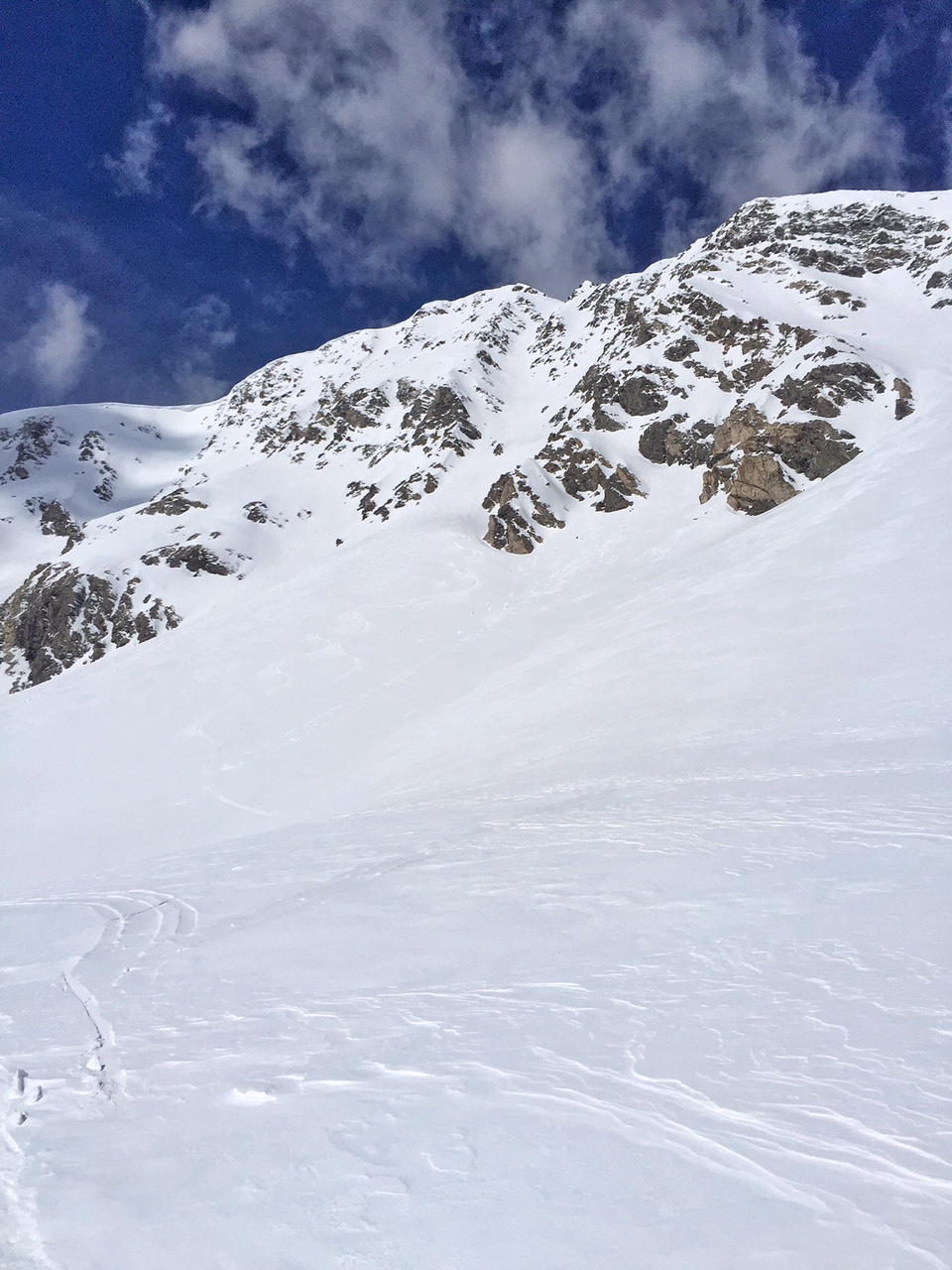 Looking back up the line we just skied! Yes!

Because it was barely 1030, the snow was just getting corned and was not sticky at all. We cruised down to where we parked at 1-70 and Bakerville and were finished before 11am. 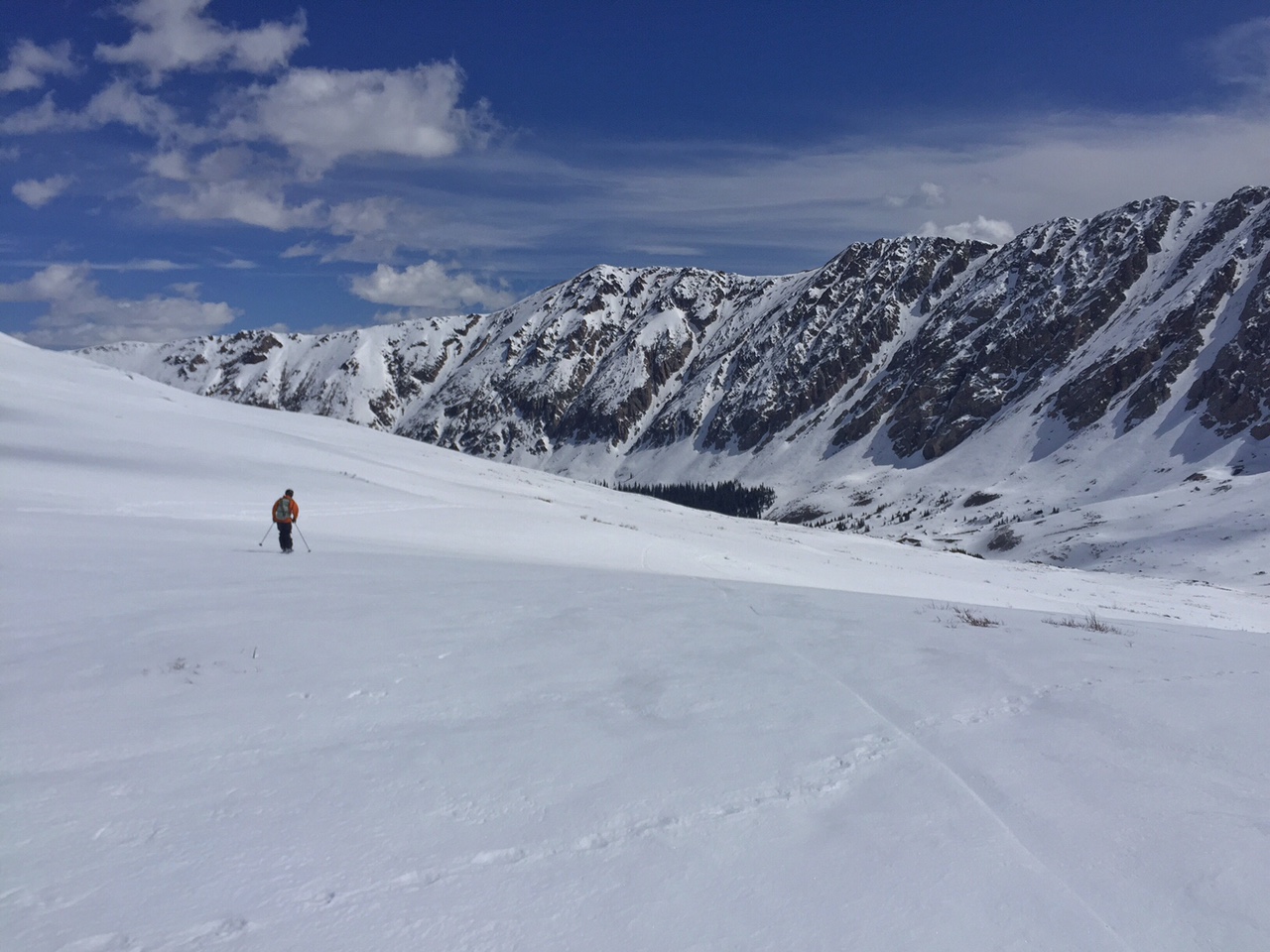 Cruising down the valley and back to the start before 11am.

A stellar day to knock off a pair of peaks. Now it becomes a waiting game as I have some presentations in the Denver area while this weather passes. Hopefully by the weekend I can sneak a few more peaks in before heading for the Sangres and San Juans next week as well as a jaunt to the elks in early May to get some big ones done!